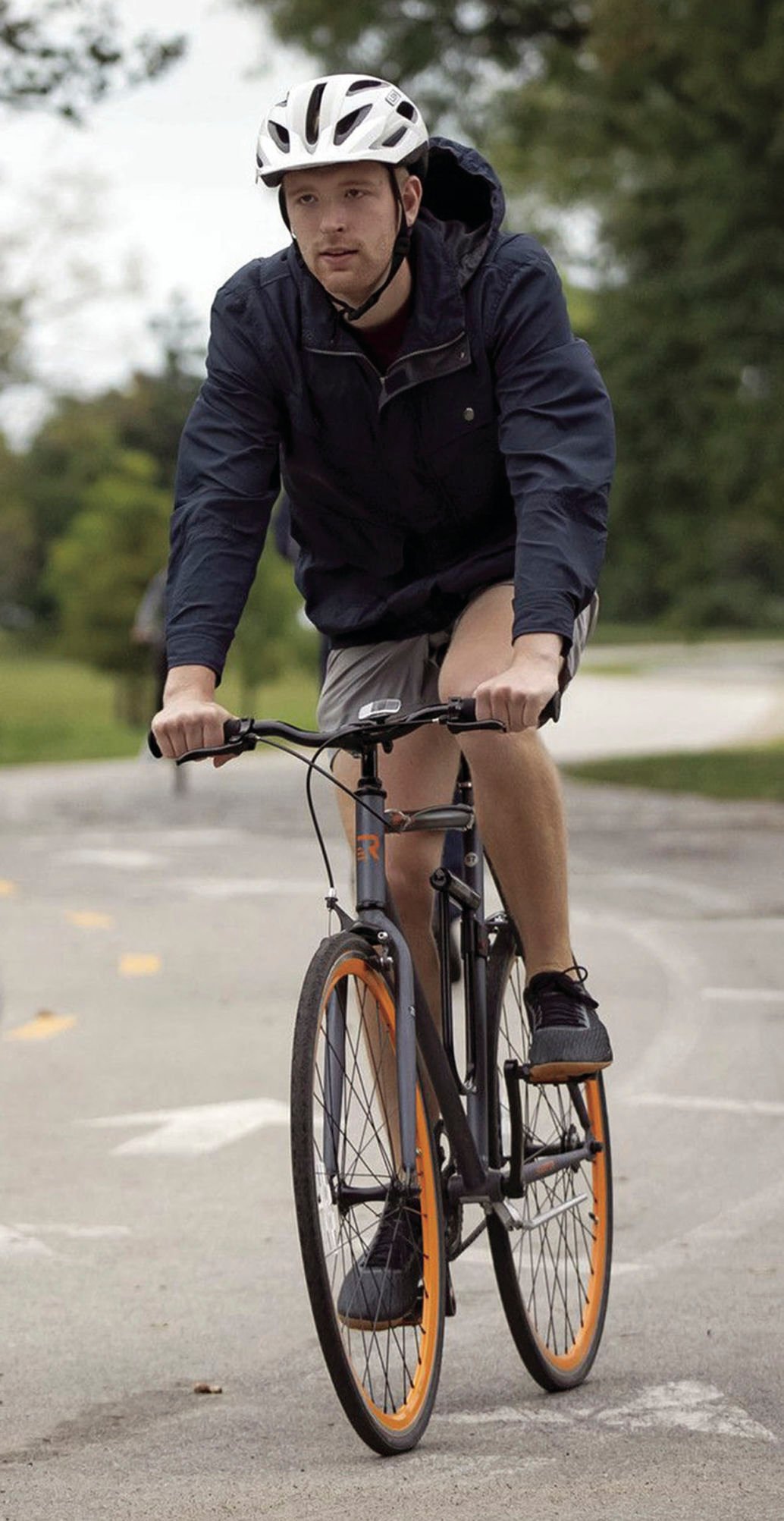 Ben Meeder rides his new bike on Sept. 9, 2020, on the Lakefront Trail in Chicago. His employer, software company ServiceNow, paid for the bike. 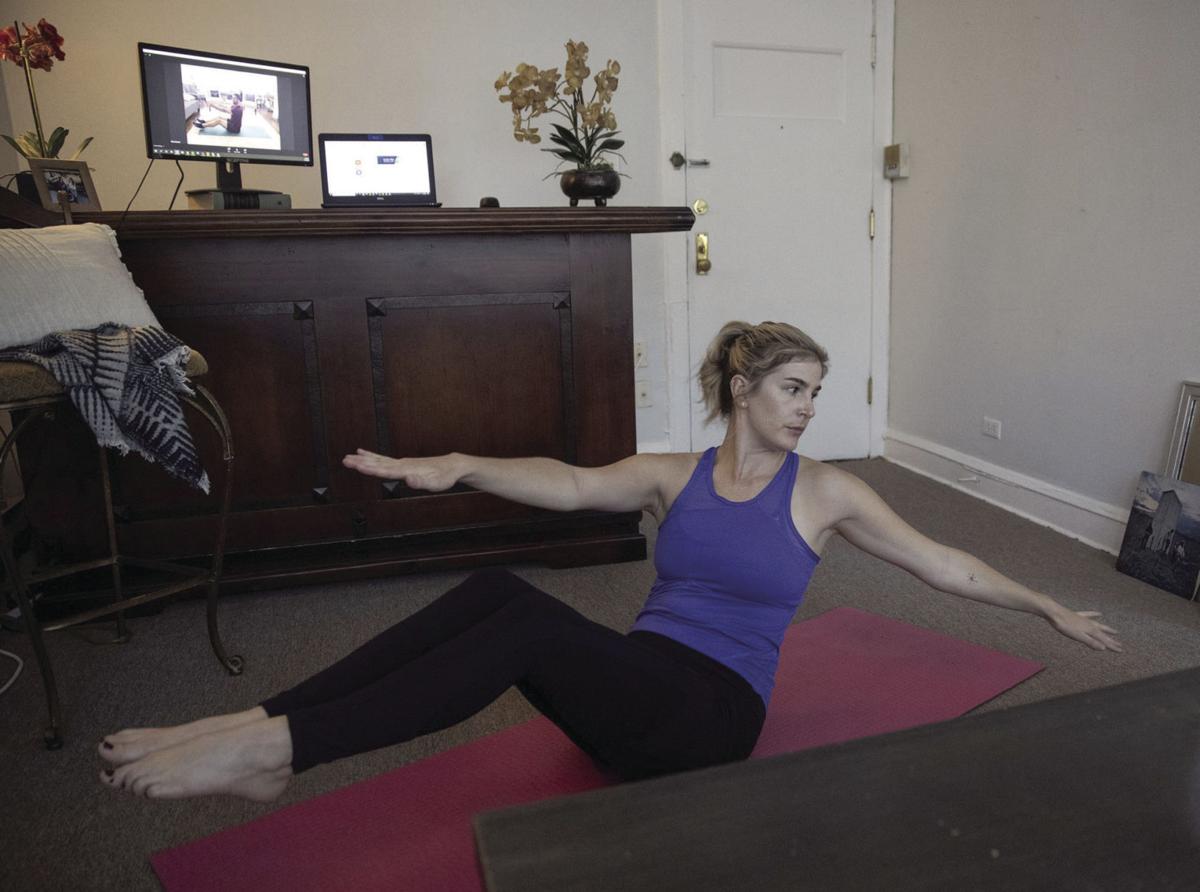 Devon Strand exercises to a virtual Zoom workout provided through her gym LulaFit, at her home on Aug. 31 in Chicago.

Ben Meeder rides his new bike on Sept. 9, 2020, on the Lakefront Trail in Chicago. His employer, software company ServiceNow, paid for the bike.

Devon Strand exercises to a virtual Zoom workout provided through her gym LulaFit, at her home on Aug. 31 in Chicago.

CHICAGO — When Ben Meeder bought a new ride from a bicycle shop earlier this summer, his employer footed the bill.

The purchase was part of a $700 stipend software company ServiceNow gave its employees to improve their well-being during the isolating and seemingly unending pandemic.

ServiceNow’s stipend increased from $500 in July, right around the time it became clear to many companies that employees would remain remote until at least 2021.

ServiceNow is not alone.

Six months into the coronavirus pandemic and with no return to the office in sight, employers are realizing that working remotely through a global health crisis requires more than helping employees pay for a comfy office chair. They areinvesting in intangibles that can help with mental wellness, like exercise, online tutoring for kids, or sessions with a life coach.

T-Mobile, which merged with Sprint earlier this year to create an 80,000-employee telecommunications company, offers employees five free sessions each with life coaches, personal counselors and money experts, as well as access to tutoring referrals and child care options. Use of virtual counseling sessions in 2020 increased 21 times over 2019.

“I know we have not even hit the bulk of the iceberg of what our people actually really need,” said Deeanne King, executive vice president and chief human resources officer at T-Mobile. “We learn more every day.”

The perks have been part of job offer discussions for some time, said Junaid Karim, director of talent acquisition. But Karim said that during the pandemic, he’s been recommending the free counseling during conversations with his employees.

“I can just tell the wear and tear of the environment that we’re in is really getting to people,” he said. “Especially since it (the pandemic) has been extended.”

If any semblance of novelty around working from home remained for Payton Campbell, a performance marketing manager at Chicago-based GoHealth, it wore off when he started thinking about the year’s end.

The busiest time for employees at the online health insurance marketplace is the end of year, when everyone is signing up for coverage. Campbell knew his own remote work situation just would not do.

“I had set up kind of a standing desk on my girlfriend’s dresser with a stack of books. I’m 6-foot-5,” he said. “I had just kind of succumbed to the fact that this was going to be my new normal.”

In June, the 3,000-employee company gave employees varying amounts of money to spend on an online shop that offered hundreds of home office equipment options. Stipend amounts were based on the employees’ tenure, with $250 going to employees who had been there less than 18 months and $400 for those there longer.

Campbell bought a desk, a standing desk riser and a chair. Now when he’s done working, he leaves his second bedroom-turned-office — filled with equipment paid for by GoHealth — and goes into his living space.

“That was really big for me mentally,” Campbell said. “It allowed me to get back to that feeling of, ‘I’m waking up, I’m eating breakfast and I’m going to work,’ versus everything being one fluid motion of living and working.”

To find out what perks will help employees the most, Chicago-based Maestro Health frequently surveys its roughly 400 workers, said CEO Craig Maloney.

The health and benefits company has invested more than $500,000 into employee benefits during the pandemic, focusing on mental wellness. It gave employees extra days off, increased the number of personal days they can roll over to next year, and enhanced medical benefits to include an expanded mental health element.

“Trust me, they’re not easy decisions, and they’re give and take,” Maloney said. “We want to understand what’s most impactful and most important to our employees, so it’s some pretty hardcore listening.”

It’s paying off, Maloney said. Employee performance, productivity and retention are up.

Not every company is pouring money into their employees’ remote work setups. In the midst of an economic downturn and an ongoing unemployment crisis, the investments are a luxury not all can afford.

The cost of investing in employees’ well-being can add up, said John Dooney, an adviser at the Society for Human Resource Management.

“Companies are also laying people off, and they may have had people on furloughs,” he said. “Though they may have employees left, as survivors, they’re not in a position to really provide extra.”

Still, some third-party platforms that offer virtual services to consumers — be it online tutoring or workout classes — say they are being inundated by companies that want to buy those perks for their employees.

Before the pandemic, online tutoring platform Wyzant catered mostly to individual consumers who needed a tutor for their school-aged child, or extra help prepping for the LSAT or SAT. But recently, corporations started reaching out, wanting to subsidize the online tutoring services for their employees’ families, CEO Andrew Geant said.

“It’s not even historically a real part of our business,” Geant said. “Now it’s like we’re getting several (companies) a day that are reaching out.”

Companies in other industries have pivoted to focus on the work-from-home crowd too.

LulaFit, which manages workout centers and other amenities in commercial buildings, shifted most of its wellness programming online by late March, said founder and CEO Colleen Werner.

The senior meetings and event planner for the American Hospital Association was an avid gymgoer pre-pandemic. She loved the trainers at her work gym, which LulaFit ran, and now works out with them virtually from her apartment in the Lakeview neighborhood.

“It just reminds me of being in the gym before the world broke,” Strand said. “You get those similar feelings and it’s just nice to have something comforting right now.”

Whether it’s virtual workout classes, new office equipment or access to counseling, workers are in vital need of employer support during the pandemic, said Alexa James, CEO of the Chicago chapter of the National Alliance on Mental Illness. There is additional stress, and people have been thrown off their routines.

“People whose identities are rooted in work — and having that distinction and that separation — I think are really lost and confused,” she said.

Business leaders have an opportunity to build resilience among that population, and it can be as simple as checking in with an employee to see how they’re doing, mentally and emotionally.

“Empathy allows people to get in that dark hole with you, but if you’ve never had a shared experience, it’s hard for you to find that empathy,” James said. “Now everyone is in that same place, so it’s much easier to check in.”