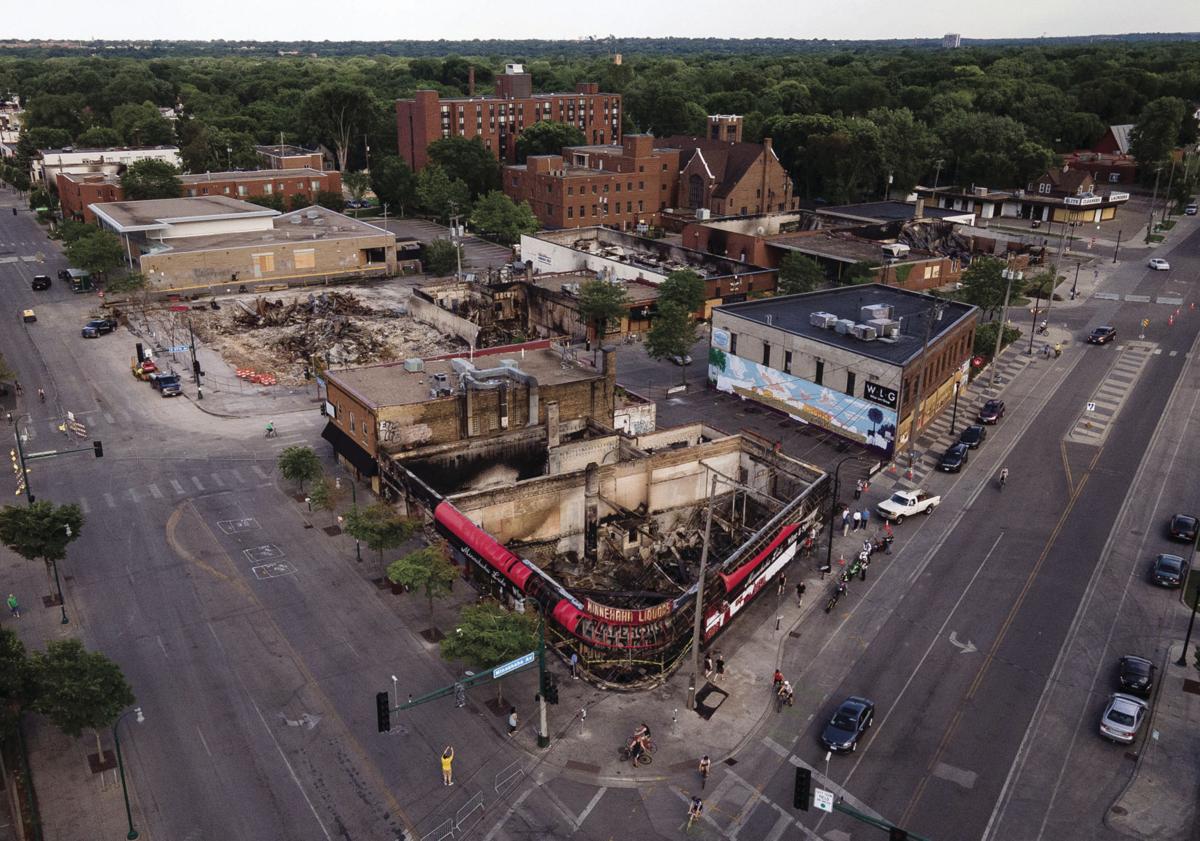 This photo taken on June 3, 2020 shows damaged stores near the Minneapolis Police Third Precinct, including the burned-down Minnehaha Lake Wine and Spirits and surrounding buildings, in Minneapolis. 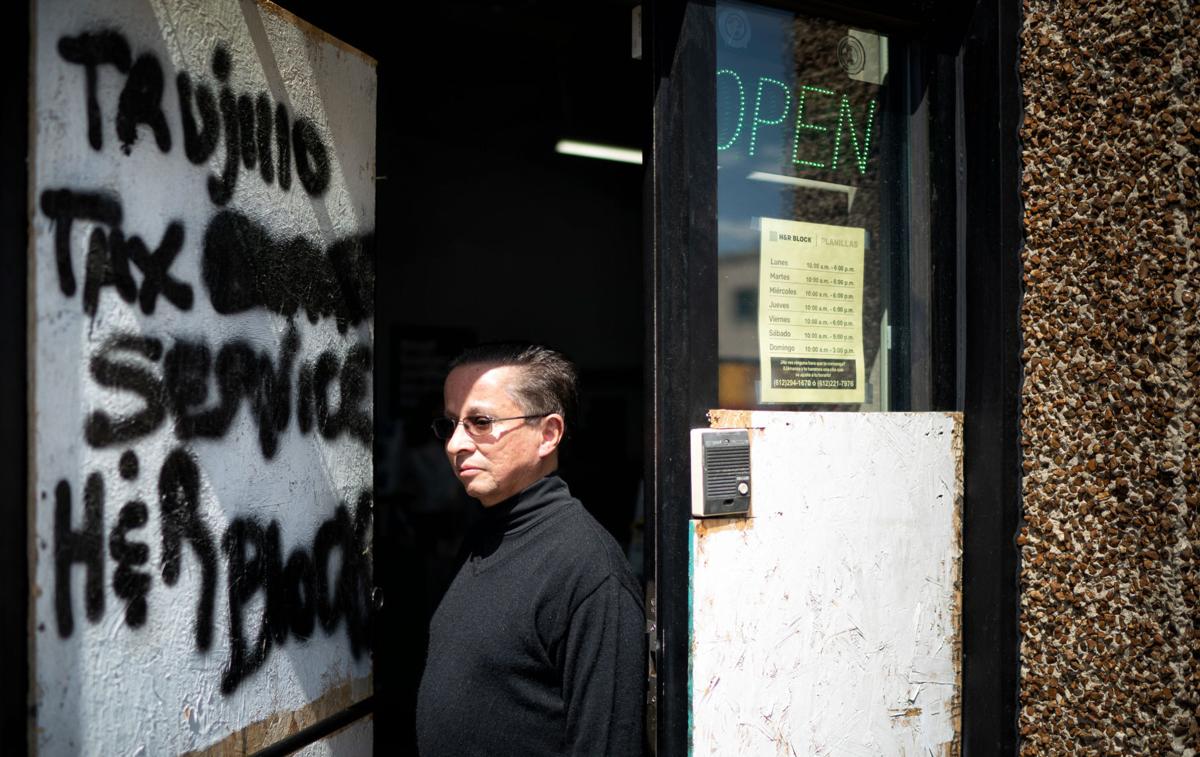 Rudy Trujillo stands in doorway of his tax services building in a part of Minneapolis that suffered heavy damage from riots following the death of George Floyd last year. Boards remain over his door and windows as a precaution against damage until former police Officer Derek Chauvin is sentenced later this month for killing Floyd. 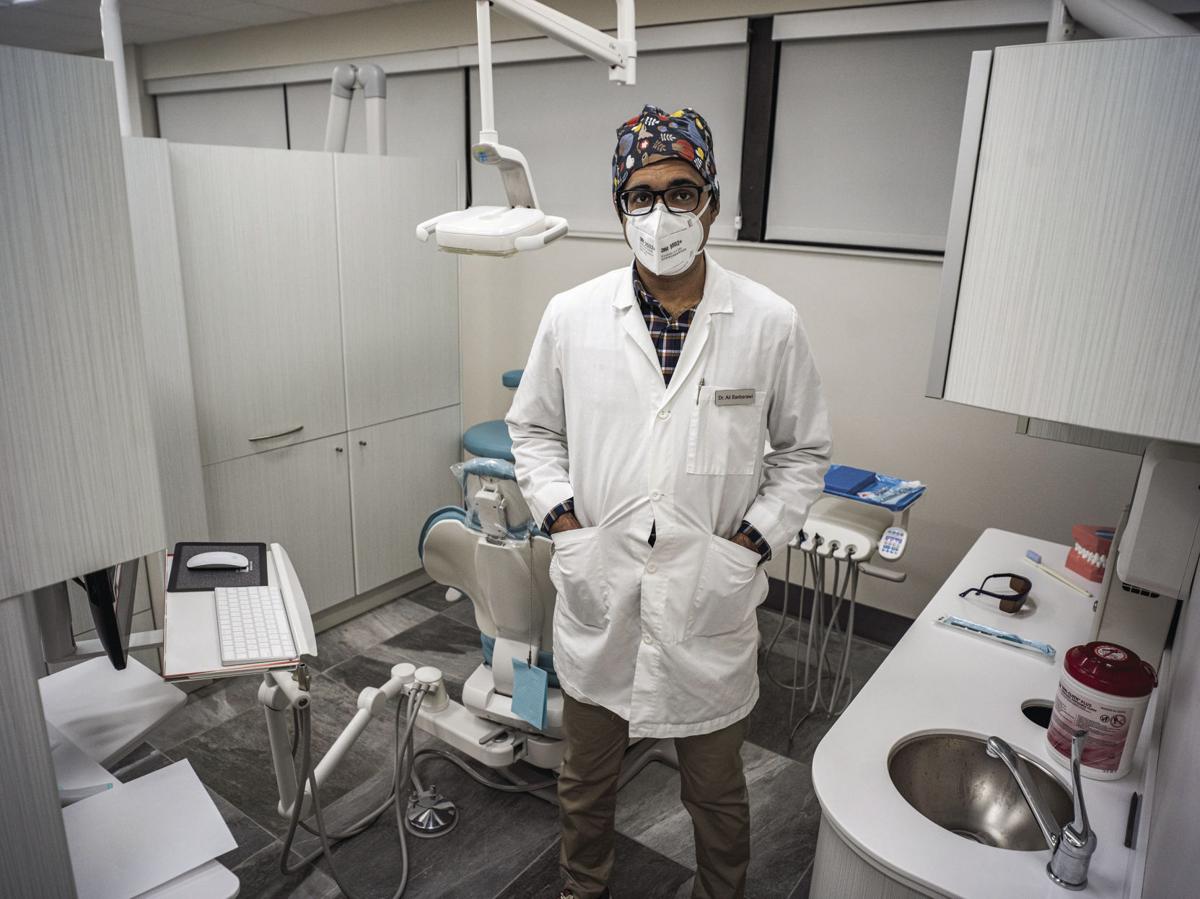 At Chicago Lake Family Dental in Minneapolis, Dr. Ali Barbarawi’s dental practice was set on fire and destroyed in May 2020. While many of the properties around him haven’t come back, he decided to rebuild and recently reopened his dental practice.

This photo taken on June 3, 2020 shows damaged stores near the Minneapolis Police Third Precinct, including the burned-down Minnehaha Lake Wine and Spirits and surrounding buildings, in Minneapolis.

Rudy Trujillo stands in doorway of his tax services building in a part of Minneapolis that suffered heavy damage from riots following the death of George Floyd last year. Boards remain over his door and windows as a precaution against damage until former police Officer Derek Chauvin is sentenced later this month for killing Floyd.

At Chicago Lake Family Dental in Minneapolis, Dr. Ali Barbarawi’s dental practice was set on fire and destroyed in May 2020. While many of the properties around him haven’t come back, he decided to rebuild and recently reopened his dental practice.

MINNEAPOLIS — Rudy Trujillo was standing outside his tax-services business along Lake Street, remembering the days of unrest after the police killing of George Floyd a year ago, how he ducked as bullets were fired from a moving car and watched other businesses burn.

“You wouldn’t believe the things I saw,” said the 60-year-old, who owns Trujillo Tax Services at E. Lake Street and S. 5th Avenue in Minneapolis. “It was really scary. Protesters, arsonists and looters, all mixed in.”

Rebuilding during a pandemic has tested Trujillo and other business owners to the core — mentally, emotionally and financially. The miles-long Lake Street corridor, the epicenter of the riots a year ago, is still a shell of what it was. Empty lots bear the likeness of nameless graves for once thriving businesses that were destroyed.

More than 1,500 businesses were damaged along Lake Street and in other business districts in Minneapolis and St. Paul in the riots. With more than $500 million in damage, it is the second-costliest civil disturbance in U.S. history, trailing only the 1992 riots in Los Angeles.

Now, if not for signs posted in windows or, in several cases, “We’re Open” spray-painted on boarded doors, those unaware could assume they were closed. Every so often, though, a door from a boarded-up building swings open, revealing activity and transactions.

“I continue to feel heartbroken when I hear what business owners are going through,” said Allison Sharkey, executive director of the Lake Street Council, the nonprofit serving the businesses along what was a thriving business district.

“I hear about them struggling to reopen after a COVID shutdown, and then civil unrest hits, then they reopen again, and then they get broken into. It’s been this series of trauma and setbacks.”

The rebuilding is not halfway done and could take years.

For many, insurance and legal challenges persist. For those that have insurance, some plans did not cover the full cost to rebuild, leaving hard-to-fill financial gaps. Government funds have been promised but are not available, while nonprofits and money from corporations try to fill the gap.

Only 21% of the most damaged properties are back in business.

Olivia Rodriguez, owner of El Rey Car Audio across the street from Trujillo’s office, is trying to regain a sense or normalcy. Looters broke into her store at 417 E. Lake St., nearly depleting the inventory. Funding from the Lake Street Council and organizations, such as the Du Nord Foundation and Urban Ventures, have helped.

Fixing her property and restocking inventory continues to be an issue. So does drawing customers back.

Rodriguez said some clients have intentionally shopped at her business after the unrest as a sign of support. If not for those clients and support from nonprofits, “it would have been impossible to remain in business,” she said.

“That [train trip] mentality where you go out of Minnehaha and Lake and get all my needs met, now it’s a bit more challenged,” said Erik Hansen, director of economic policy and development for the Minneapolis planning department. “People, especially traveling by auto, will go farther out to find a more convenient place to shop. We lost those regional shopping centers. People couldn’t get what they needed.”

St. Paul-based Wellington Management, which includes six buildings at or near the intersection of Lake and Hiawatha among the 100 commercial properties it owns and manages, is on schedule this year to reopen three of the buildings that burned during the unrest, said David Wellington, executive vice president of the company.

One is Everlake, a 189-unit, low-income apartment building on E. 29th Street that was under construction when it was set on fire. The units were supposed to be ready to rent in late 2020. By using most of the original contractors, the project began anew six weeks after Floyd died and has progressed faster than the initial build. It should be ready by the fall.

About 74,000 square feet, or about half, of the Hi-Lake Shopping Center in the 2200 block of Lake Street either burned or was decimated. The insurance carrier deemed it a total loss and said it had to be demolished, Wellington said. The center will be shown to potential tenants in a few weeks and will be anchored by off-price department store Burlington.

“We knew pretty quickly the financial and economic impact for those neighborhoods and for the folks that live around Lake Street, West Broadway and University Avenue would be very significant,” Wellington said. “It’s part of the reason why we wanted to reinvest.”

More redevelopment projects are in the queue. A group of buyers has secured purchase of the century-old Coliseum Building at 2700 E. Lake St. for about $2 million and say they want to make it a hub for businesses that were displaced during the riots, but also businesses owned by people of color, immigrants and women.

Neighborhood Development Center, a St. Paul real estate firm, acquired a corner lot at Chicago Avenue and E. Lake Street, the site of a two-story building destroyed by arson during the riots. The site could become a multistory commercial complex that includes affordable housing.

For small businesses, funds are being deployed in an effort to quicken the recovery process. Portions of the $12 million raised for the Lake Street Council’s We Love Lake Street Recovery Grant program will go toward acquisition and predevelopment costs for local businesses, Sharkey said.

The goal of the allocated dollars is to turn renters into property owners, but also to keep property owners local. The funds will cover up to 10% of the purchase price, capping at $100,000 per project. Businesses can also apply for up to $50,000 in predevelopment grants, she said. Applications will be accepted in multiple rounds on the first day of each month until funding is no longer available.

The city of Minneapolis’ Community Property Development Fund, which has about $8 million in it, will be used to help rebuild as well. The city said it is further aiding rebuilding efforts through recently designated cultural districts, a move put into motion before the pandemic and Floyd’s death, Hansen said.

About $270 million from the federal $1.9 trillion American Rescue Plan could trickle down to help businesses that are still struggling as well, Hansen said. The city’s intention is to directly invest the money in communities.

State money could be added to the mix, although any measures would need to be passed during the special session next month.

Henry Jimenez, executive director of the Latino Economic Development Center, is not impressed.

“I feel like the government is still operating in the same way, as if the world just continues on,” he said. “It’s a time for creativity and a time for innovation. I feel like it’s the same process.”

The recovery process, he said, will have to be driven by hometown businesses and their customers.

It may be a year or two until more rebuilding projects come to fruition; there also could be some persistent empty lots for a long period of time, Wellington said.

“Lake Street and West Broadway, and to a lesser extent University Avenue, won’t ever look the same,” he said.

A more unfortunate aftermath of the riots could be the loss of stores for those living within the affected neighborhoods, stakeholders say.

“On either side of these business corridors are also some of the lowest-income housing we have in the Twin Cities,” said Kathryn Greiner, executive director of Minneapolis-based Rebuilding Together.

Efforts to support some of the neighborhoods will take several years, Greiner said.

Jimenez said Minnesota’s economy can’t afford to see the Lake Street corridor deteriorate. “The amount of businesses on this corridor and amount of products and services and produce they acquire outside the metro, across the region and state, it’s not just an engine for Minneapolis and St. Paul, but the state,” he said.

For Trujillo, the effect is personal. He has operated his business from various addresses on Lake Street since 1993. His goal was to end his career there.

Trujillo was able to grab computers and other equipment from the building on the first night of the riots. Aside from two bullet holes in the building’s exterior, his office was untouched.

He has yet to remove the wood that has covered his windows since Derek Chauvin was convicted of Floyd’s murder. He’s awaiting Chauvin’s sentencing on June 25. But he now has security cameras and bullet-resistant windows, ready in case there’s a next time.

Business has improved, but not to levels experienced before the pandemic, Trujillo said. To stay afloat, he’s used government grants and funding from the Lake Street Council, as well as a loan through the federal Paycheck Protection Program.

But with street and sidewalk construction just outside his office the flow of traffic near his intersection has decreased dramatically, he said. Trujillo thinks would-be consumers are avoiding the area for that reason, along with a rise in violence. After the tax season, he anticipates a significant drop in customers.

“This was a hub of Minneapolis,” Trujillo said. “Everything happened on Lake Street.”