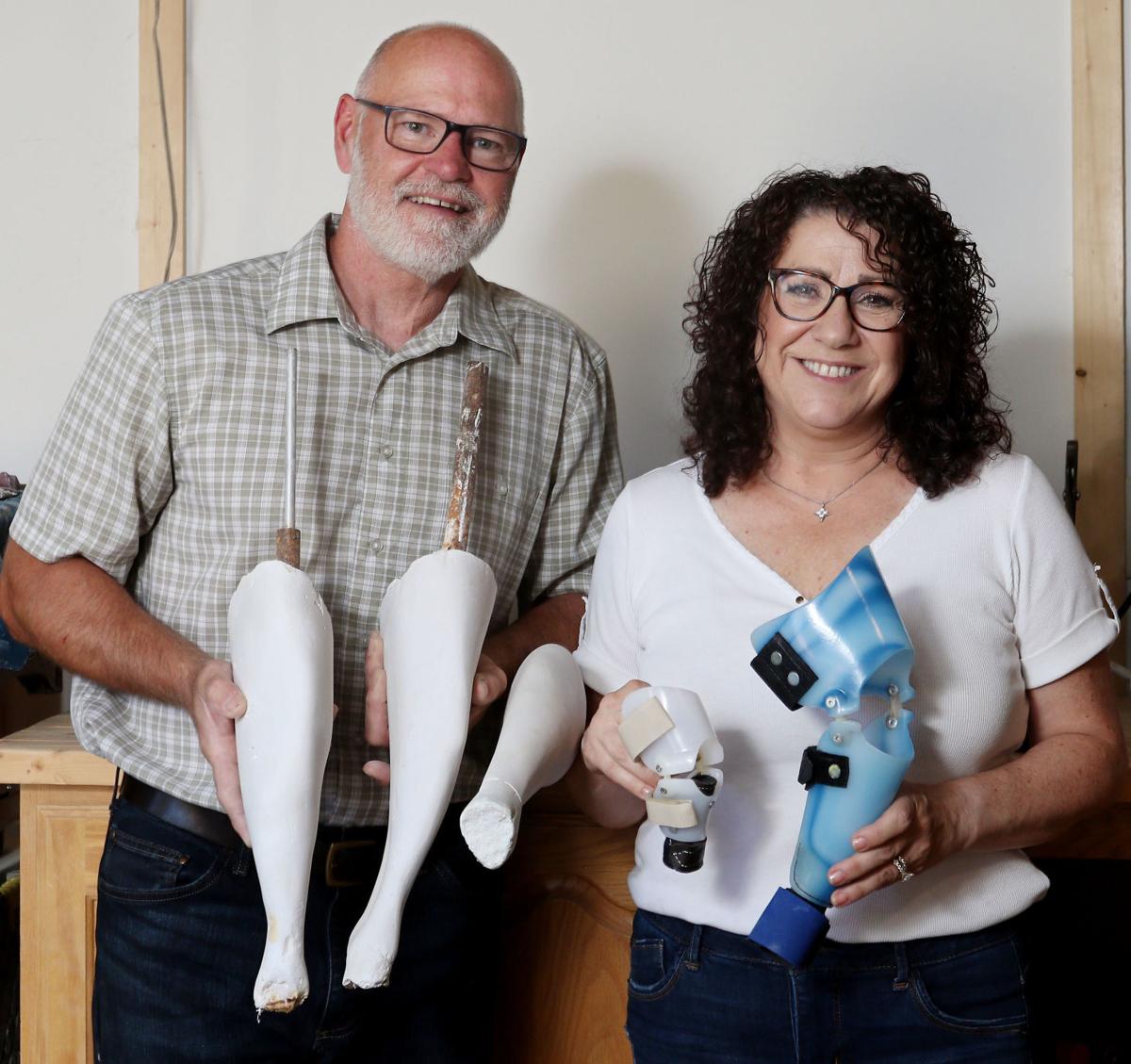 Mike and Sara Antonson own and run custom pet prosthetic business Embrace Orthocare out of their Chippewa Falls home. Mike is holding up plaster casts of animals’ legs, which are used in the process for making braces that help pets regain their mobility after an injury. 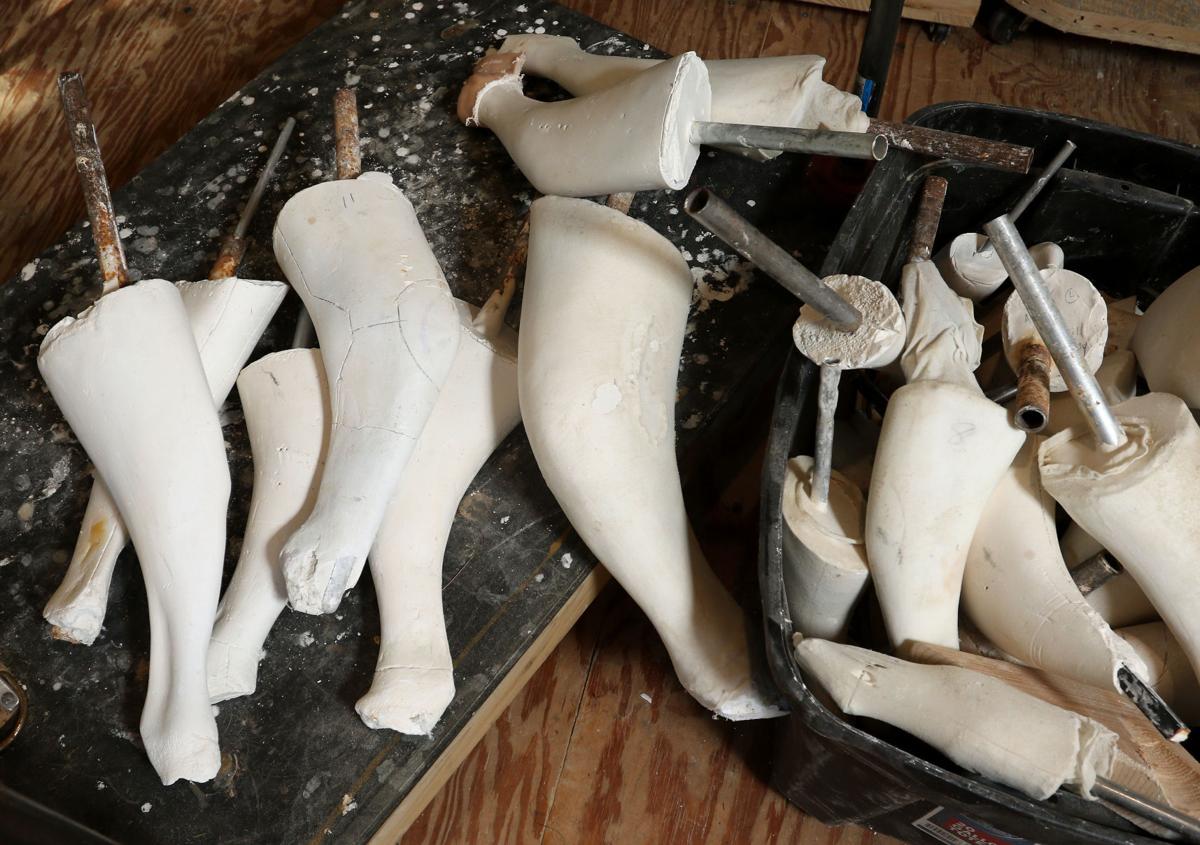 A dog models a custom brace at Embrace Orthocare on Sept. 2. 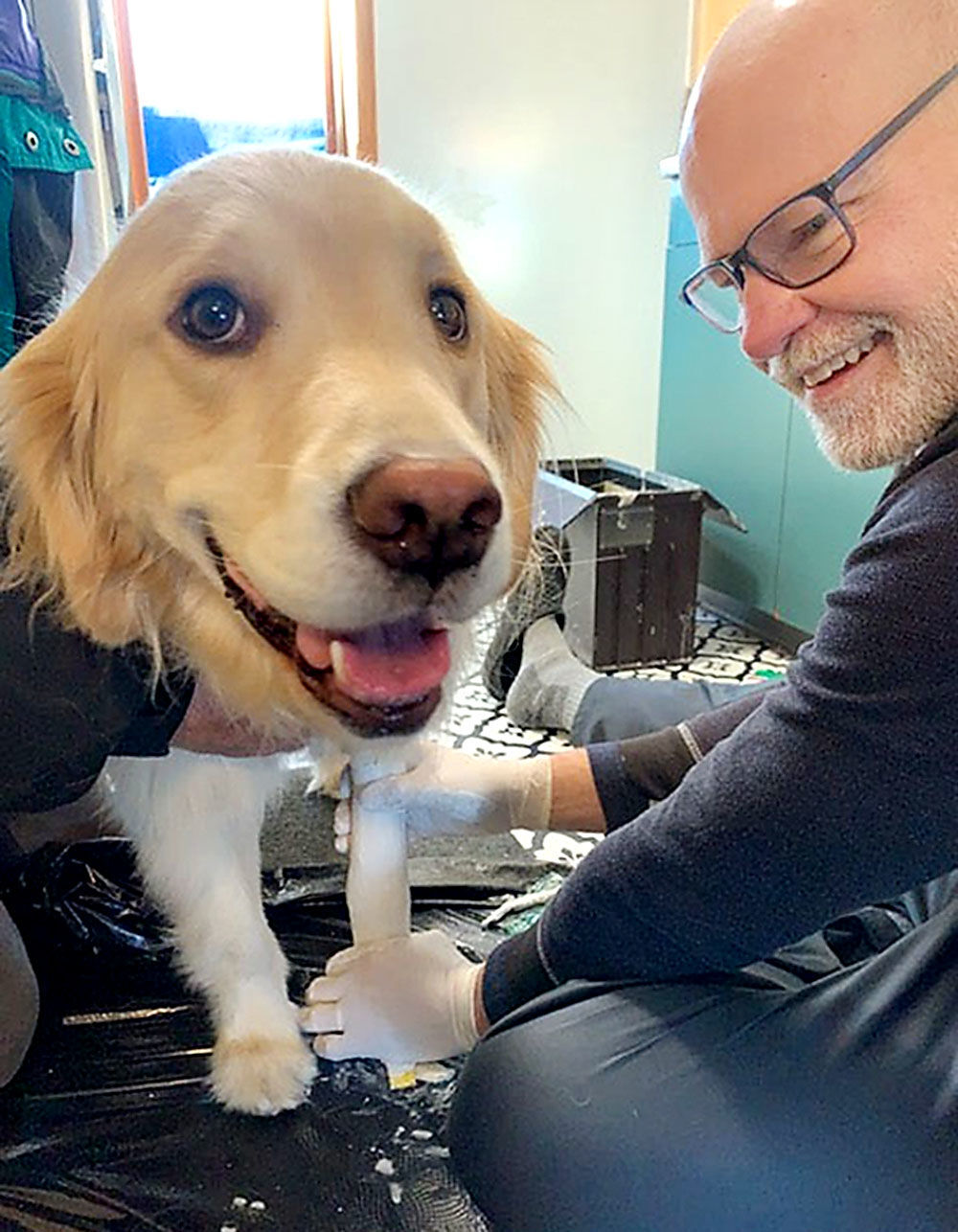 Mike and Sara Antonson own and run custom pet prosthetic business Embrace Orthocare out of their Chippewa Falls home. Mike is holding up plaster casts of animals’ legs, which are used in the process for making braces that help pets regain their mobility after an injury.

A dog models a custom brace at Embrace Orthocare on Sept. 2.

CHIPPEWA FALLS — Mike and Sara Antonson never know exactly who their next client at their Chippewa Falls business is going to be.

Their past customers: A six-week-old kitten with a paw injury, a Newfoundland dog and a young lamb.

The business began several years ago, when the couple’s love of animals intersected with Mike’s longtime career.

Mike has worked at the Eau Claire location of Minnesota-based Winkley Orthotics and Prosthetics for 26 years, and in the orthotics field for over 30.

“For years people would call and ask if they did braces for dogs, and the answer was no,” Mike said of his day job at Winkley Orthotics. “That spurred on my thinking process about designing a brace that would actually work for a pet.”

Mike and a few colleagues started an animal-based orthotics business, Forward Custom Design, around 2015, he said. When his co-founders moved on, the Antonsons rebranded the business as Embrace Orthocare a little over a year ago.

“It was kind of an easy transition for me, having done it on the human side for so many years and being the dog lover that I am,” Mike said.

Sara also has a long history in the Chippewa Valley community. She was CEO of the Girls and Boys Club of the Great Chippewa Valley for 13 years before leaving in April 2019 to focus on Embrace Orthocare, where she leads marketing and project management.

Mike and Sara run the business out of their Chippewa Falls home and Mike’s nearby workshop.

While creating a cast from a pet’s limb takes about 20 minutes, the fabricating process lasts about a week, Mike said.

They’ll first take a cast impression of the animal’s injured limb. After removing the cast from the animal, the impression is filled with liquid plaster, creating a copy of the limb. Sheets of plastic heated in a workshop oven are then draped over the plaster and left to cool overnight. After Mike shapes the brace and adds straps and padding, the pet comes back to the workshop for a fitting.

Pet owners can buy generic leg braces over-the-counter; online retailers offer dozens of options ranging in price from tens to hundreds of dollars. But Embrace Orthocare’s strength is in its customization, Mike said. Instead of one-size-fits-all, he creates a brace fitted exactly to the injured animal and makes detailed adjustments after fittings.

Animals are much more active than humans, and “historically, braces don’t hold up well, and/or cause abrasions or sores on dogs,” Mike said. “We can say, ‘The brace is hurting me here, and I need to take it off for a little while.’ Dogs are tough, they’ll just keep going.”

The brace Mike most commonly produces is modeled after a human anterior cruciate ligament, or ACL, brace — designed to take pressure off of a damaged knee ligament. Other braces are modeled to heal animals’ limb fractures, nerve issues and hyperextension problems.

For Mike and Sara, the most enjoyable part of the process is fitting the brace on the pet.

“It’s fun to watch, even when you first put a brace on,” Sara said. “It’s almost as if they look at you quizzically. They kind of shake the limb a little bit … start to gingerly walk on it, then you can watch them just start to prance.”

Embrace Orthocare doesn’t only make braces. A recent customer’s pet — a dog that compulsively licked an injured paw, which interrupted healing — was fitted with a bubble-shaped “shoe” suspended by a strap. The wound got airflow but was protected against licking and was able to heal, Mike said.

The company has even outfitted pets from local shelters who have extensive nerve damage or missing limbs with custom prostheses or carts — decked out with lightweight rubber wheels for maneuverability.

“It’s pretty amazing,” Mike said of pets’ reactions to walking and running again. “You can almost see a smile on their faces.”

Clients across the country

While business at Embrace Orthocare slowed this spring due to the COVID-19 pandemic, it’s starting to pick back up again, Sara said in August.

“This is something we can do with pet owners while socially distanced,” Mike said.

The company has done business around the U.S., sending bracing kits to veterinarians in Georgia and Florida in addition to working with local veterinarians, pet owners and shelters.

But the company is still staffed only by Mike and Sara, assisted by their two Weimaraners, eight-year-old Macey and younger Bella.

“They love to be models for us,” Mike said. “They’re a good resource for the design element.”

The couple doesn’t plan to be any less busy in retirement.

“We’re having a great time doing it,” Sara said. “It’s so much fun and rewarding to watch what we can do to help all of our furry friends and all their people.”