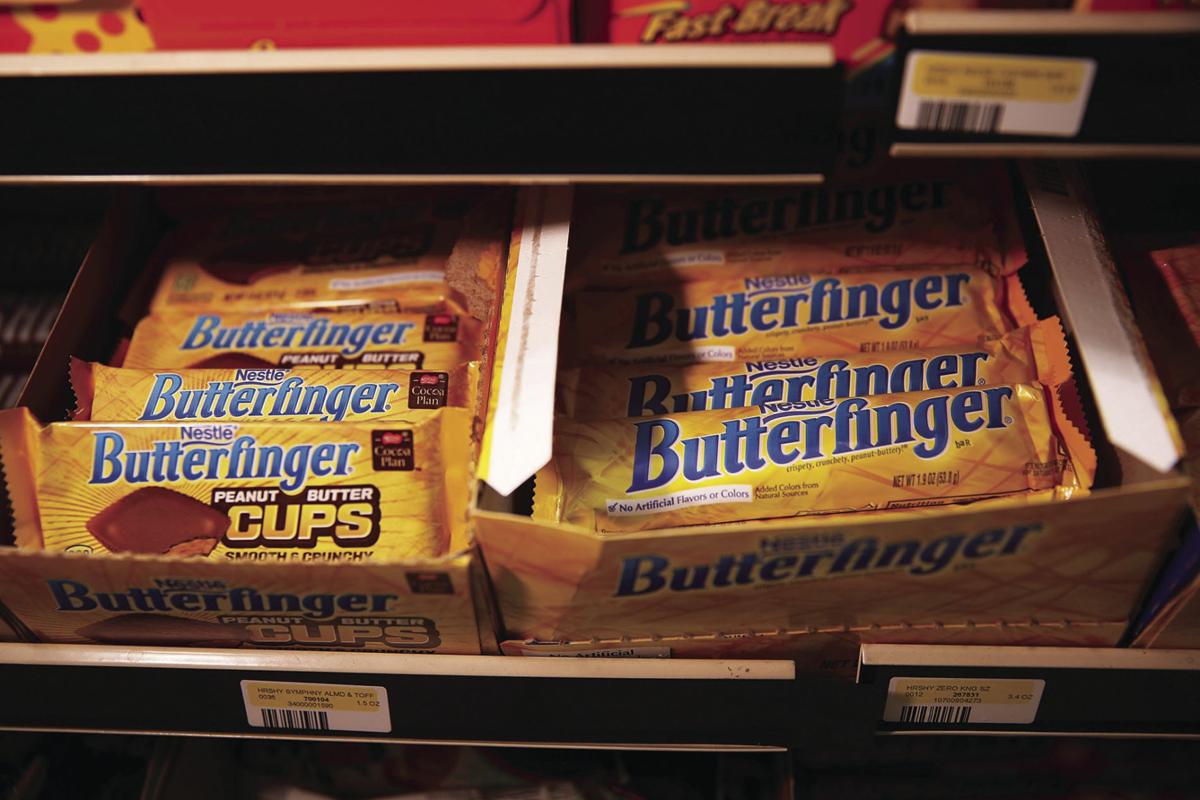 Nestle Butterfinger candy bars sit on a convenience store shelf in 2015. Oakbrook Terrace, Ill.-based Ferrara Candy now controls the brand, and it has revamped the bar, with some recipe changes, double-layer packaging to preserve freshness and a brighter design. 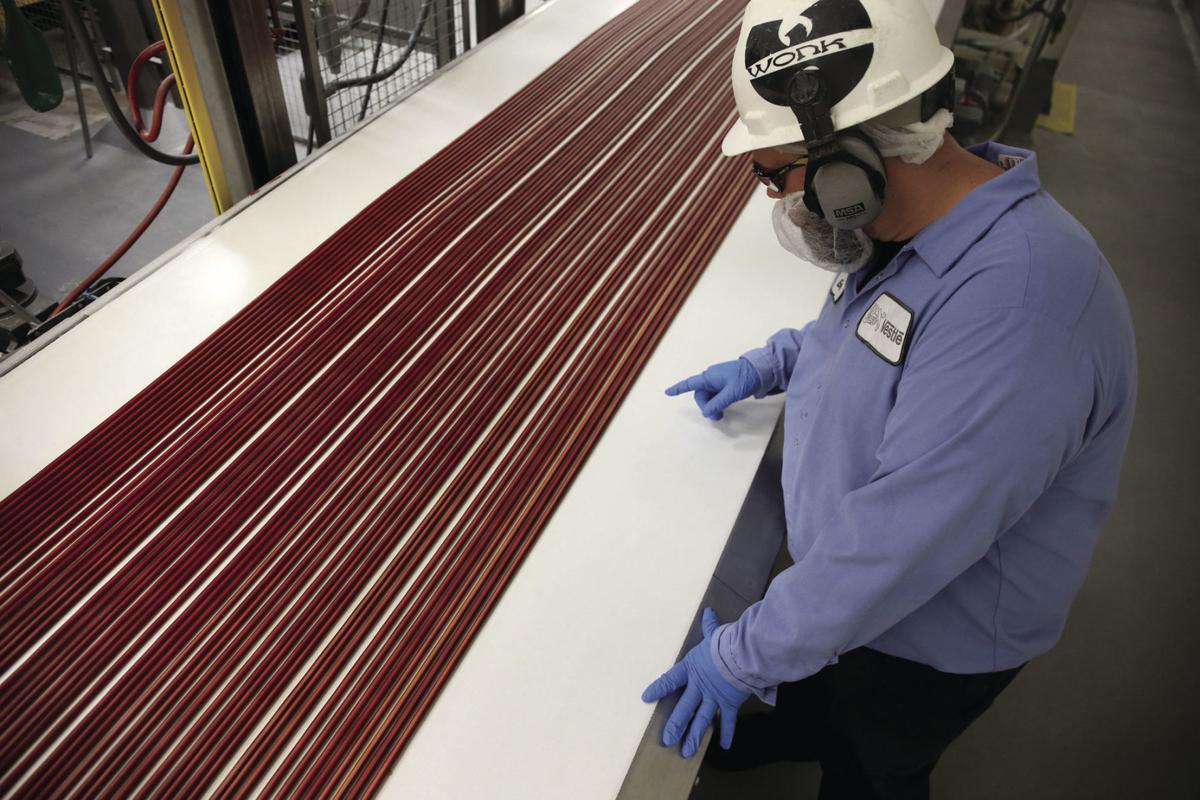 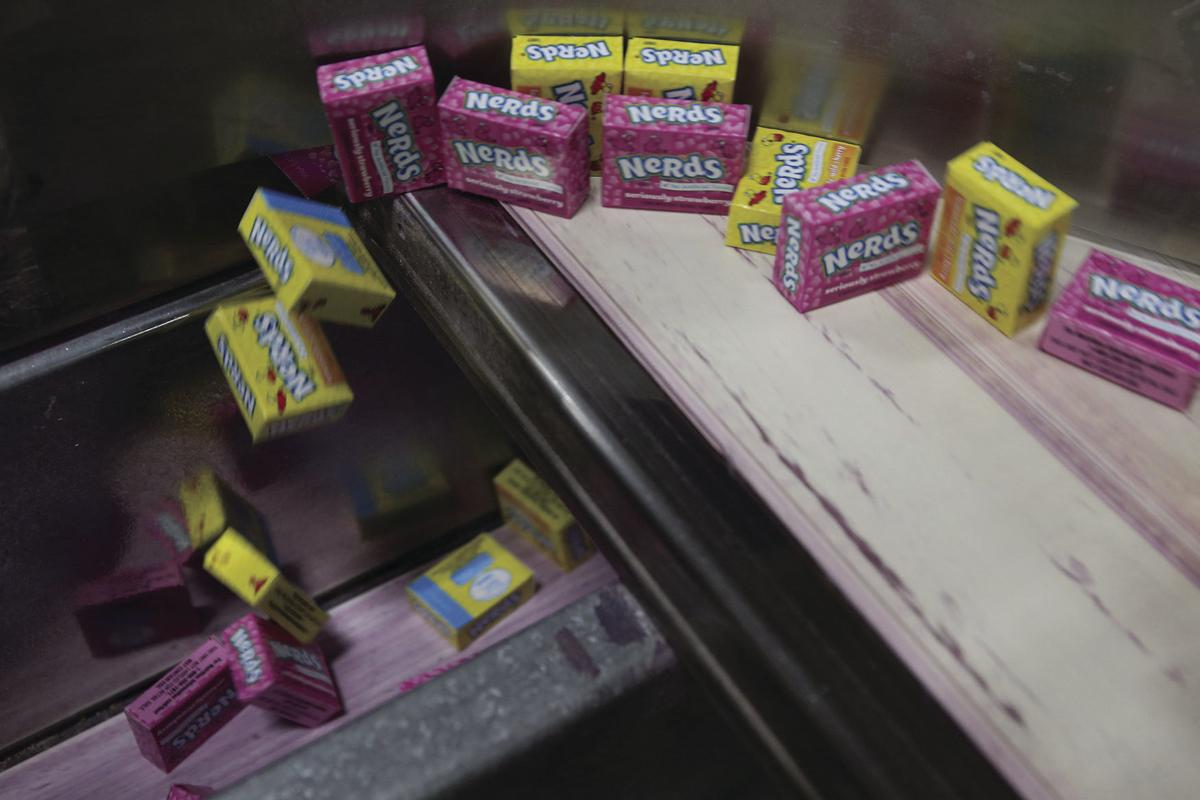 Boxes of Nerds Candy comes down the line at the Ferrara Candy Company in Itasca, Ill. Unlike the chocolate bar brands that Ferrara acquired, Nerds did not need a turnaround and have been enjoying surging sales.

Nestle Butterfinger candy bars sit on a convenience store shelf in 2015. Oakbrook Terrace, Ill.-based Ferrara Candy now controls the brand, and it has revamped the bar, with some recipe changes, double-layer packaging to preserve freshness and a brighter design.

Boxes of Nerds Candy comes down the line at the Ferrara Candy Company in Itasca, Ill. Unlike the chocolate bar brands that Ferrara acquired, Nerds did not need a turnaround and have been enjoying surging sales.

After years of declining sales, it was time to lay a finger on Butterfinger.

The iconic candy bar, with its bright orange filling and familiar “nobody lay a finger on my Butterfinger” ad campaign, has experienced a sales turnaround since relaunching early this year with a new recipe and a new look, according to executives at Oakbrook Terrace, Ill.-based Ferrara Candy.

The Nestle purchase more than doubled the portfolio of Chicago-born Ferrara, best known for its Black Forest gummy bears and Trolli and Brach hard candies, by giving it control of an additional 20 big-name brands including Butterfinger, Crunch, Baby Ruth, Raisinets, Nerds and SweeTarts.

Ferrara, which took over the Chicago-area Nestle factories where many of those candies are made, has been introducing new formulas and packaging and boosting distribution. Early results suggest the efforts have been successful, and the company plans to apply the same approach to brands Ferrero Group recently acquired from Kellogg, including cookie mainstays Keebler and Famous Amos.

“When we brought the brands into our portfolio we knew we had gems that had not been invested in to perform at potential,” Kristen Mandel, senior director of marketing at privately held Ferrara Candy, said of the confections formerly owned by Nestle.

Crunch was the first to get its new owners’ attention. The company didn’t touch the product itself but doubled its investment to launch an “America Loves Crunch” advertising campaign, the chocolate brand’s first on-air marketing campaign in a decade.

Crunch’s sales, which had been flat, have grown 4% since the acquisition, Ferrara said.

Getting Butterfinger’s groove back was a bigger challenge. Its quality had deteriorated over the years and sales had seen double-digit declines, so Ferrara revamped the recipe and tripled its marketing investment, Mandel said.

For the new “better Butterfinger,” made at a factory in Franklin Park, Ferrara removed hydrogenated oil and the controversial preservative TBHQ, or tertiary butylhydroquinone; created a richer “chocolatey” coating through its refinement process and by adding more cocoa and milk; and introduced jumbo peanuts, ground in-house, to layer into the taffy in the orange center, she said. The new bar also comes in double-layer packaging to preserve freshness with a brighter, more contemporary design that calls for attention like a “bright yellow beacon of light,” Mandel said.

The changes riled some Butterfinger fans, who took to Twitter with threats to boycott the brand and demanding a return to the original recipe. “Happy Father’s Day to everyone except the man or woman that decided to change the @butterfinger recipe,” read one Tweet last month. “The new Butterfinger is so gross,” read another, paired with a vomiting emoji.

But in a recent four-week period, Butterfinger sales were up 17.7% compared with a year before, Ferrara said.

“Any time you touch a product with loyal fans, you risk this type of reaction,” Ferrara Candy spokeswoman Sarah Kittel said. “That said … we’re confident that both loyal fans and new fans alike will embrace the Better Butterfinger for the long term.”

Baby Ruth’s makeover will hit shelves later this year, in time for its 100th birthday next year. Its new formula boasts dry-roasted peanuts instead of oil-roasted, plus the bar will have new double-layer metallic packaging and its first advertising campaign in a decade, Mandel said.

“The more that Nestle moved into a better-for-you and healthy universe, the less they figured out what to do with those (candy) brands, so they basically let them sit,” she said. Nestle’s diverse portfolio includes Gerber baby food, Perrier and Lean Cuisine.

Nostalgia plays a significant role in people’s candy purchases — most people say their favorite candy is the one they grew up eating — so there is great opportunity in sprucing up the classics, most of which have been around since the 1920s, Mogelonsky said.

“The redo of those Nestle brands was brilliant,” said Mogelonsky, noting that even a packaging change can make a difference because candy sales are so often impulse buys. “I would bet that before people saw the new and improved packages, they forgot about the brand.”

Italy’s Ferrero Group, she added, is “admirably clever” for how it has gained share of the U.S. candy market. The company, now based in Luxembourg, entered the U.S. in 1969 with Tic-Tacs, and later captured Americans’ hearts with hazelnut-flavored Nutella and Ferrero Rocher chocolates, but over the last two years it has become more aggressive.

Ferrero Group in 2017 purchased Ferrara Candy as well as Chicago-based chocolatier Fannie May, and that same year it introduced a version of its popular toy-filled chocolate Kinder Egg. The confection had been prohibited from being sold in the U.S. because of choking hazards but now complies with U.S. regulations. The following year Ferrero made the $2.8 million acquisition of Nestle’s U.S. brands, which it merged with its Ferrara portfolio. This year, it announced a $1.3 million acquisition of Michigan-based Kellogg’s cookies, fruit-flavored snacks, ice cream cones and pie crusts.

The buying spree has made Ferrero Group, with close to $12.4 billion in global revenue last year, the second-largest candy company in the world, surpassing Deerfield, Ill.-based Mondelez International. Chicago-based Mars Wrigley Confectionary is still by far the leader with $18 billion in global sales.

Ferrero’s growing U.S. business has raised the prominence of Ferrara Candy, which is working with its parent to manage the Nestle and Kellogg portfolios. After the Kellogg deal closes this month, Ferrara will be a $3 billion operation with more than 40 brands, the company said. (Despite the name similarities, Ferrero Group, founded in 1946 in Italy, and Ferrara Candy, founded in Chicago’s Little Village neighborhood in 1908, were not connected prior to the acquisition.)

Ferrara Candy employs more than 4,000 people currently, nearly 2,500 of them in the Chicago area, and with the Kellogg acquisition it will grow its workforce to nearly 6,000, with plans to hire another 200 mostly corporate employees by the end of the next year to support the new business, Kittel said.

The company in early fall plans to move its headquarters and 500 office workers to Chicago’s old main post office downtown, where it recently expanded its lease to encompass 114,000 square feet. Once the Kellogg brands are folded in, Ferrara will operate 14 manufacturing plants, eight of them in the Chicago area.

At a former Nestle plant in Itasca, in Chicago’s northwest suburbs, panning machines whir loudly as sugar crystals are sprayed with liquid sugar, over and over, to create the little bumps of candy known as Nerds. Nearby, a packaging machine spits out 1,000 packets of Nerds per minute.

Nerds, one of the fastest growing brands in the candy market, didn’t need a turnaround like some of the chocolate bars acquired from Nestle, but Ferrara is trying to build on its existing success with greater distribution, marketing and new products.

Nerds sales were up 40% during a recent four-week period thanks in part to innovations like Big Chewy Nerds, which feature a chewy center covered in Nerds’ classic crunchy shell, the company said. Sour Big Chewy Nerds launched in April.

“Nerds is on fire,” said Greg Guidotti, general manager of Ferrara’s sugar portfolio. Both kids and nostalgic adults are buying them, he said.

In another part of the plant, long strands of liquid sugar and corn syrup rolled down a conveyer belt 300 feet long to be made into SweeTart Ropes, which combine a chewy licorice exterior with a soft, tart interior in a long, wiggly shape reminiscent of Twizzlers.

SweeTart Ropes, whose sales were up 15% over the last 13 weeks compared with a year ago, have become the brand’s best-selling product since they were introduced five years ago, Guidotti said, and Ferrara has been doubling down with new flavors, including strawberry, apple and tropical.

Consumers also want healthy, but concerns about the health impacts of sugar don’t seem to have hurt candy sales, which in the U.S. are stable with about 1% annual growth.

Companies have responded to health concerns with an array of sizes and resealable share packs, a nod toward the desire for moderation. But the industry is unapologetic about its sweetness. Ferrara uses 250 million pounds of sugar a year.

“This is a treat,” Guidotti said. “There is moderation embedded in it anyway.”

Though Ferrara is making some changes to the former Nestle brands, much at the Itasca factory has remained the same, including the people.

“There’s a lot of pride, a lot of tenure,” said plant manager Tola Alade-Lambo, who has been with the company for 12 years.

The factory, which employs 431 people and produces 90 million pounds of candy a year, has been making candy since it opened in 1974 under Sunmark. It was taken over by Nestle in 1988.

In addition to Nerds and SweeTarts, the Itasca plant makes Bottle Caps, Spree and Gobstoppers, which are part of the Willy Wonka brand that inspires dreams of chocolate rivers and Oompa Loompas.

That will stay, she said.