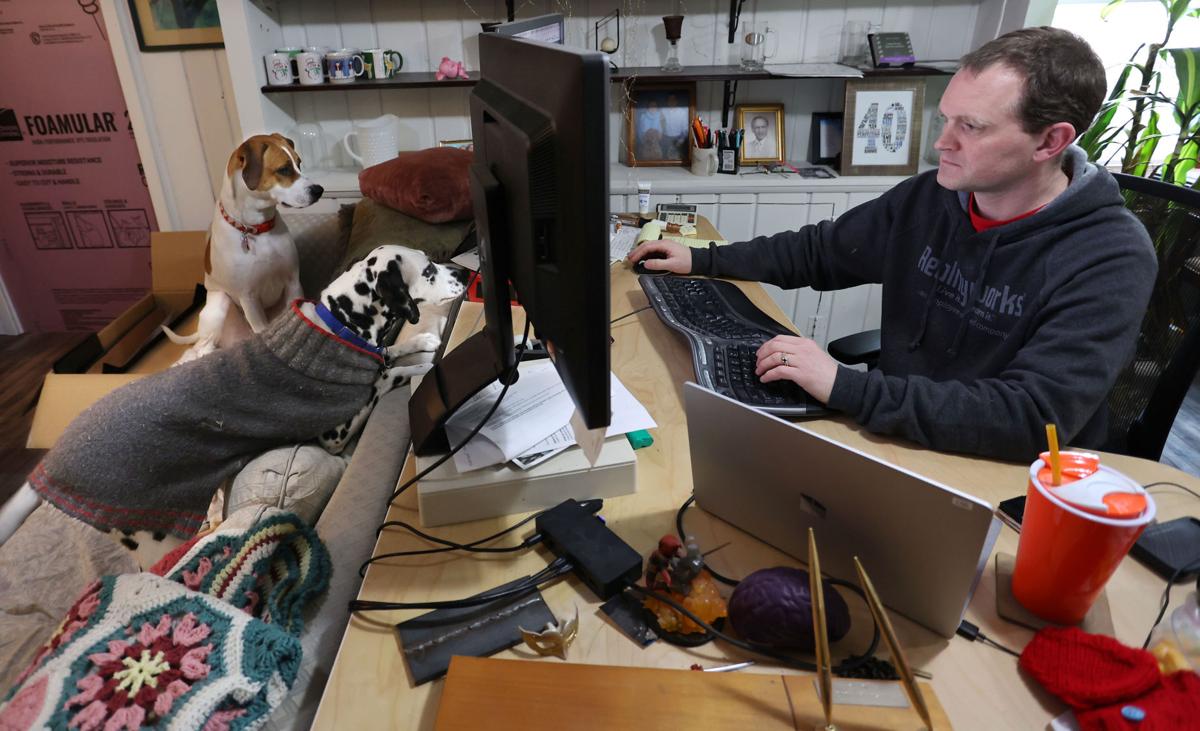 Realityworks employee Nate Schlieve works from home with his two rescue dogs, Dottie and River, in the basement office he’s created in his Eau Claire home. Though initially skeptical of shifting his workplace to his home, Schlieve has grown to like the arrangement that is expected to continue for most of the Eau Claire company’s employees even after COVID-19 is no longer a threat. 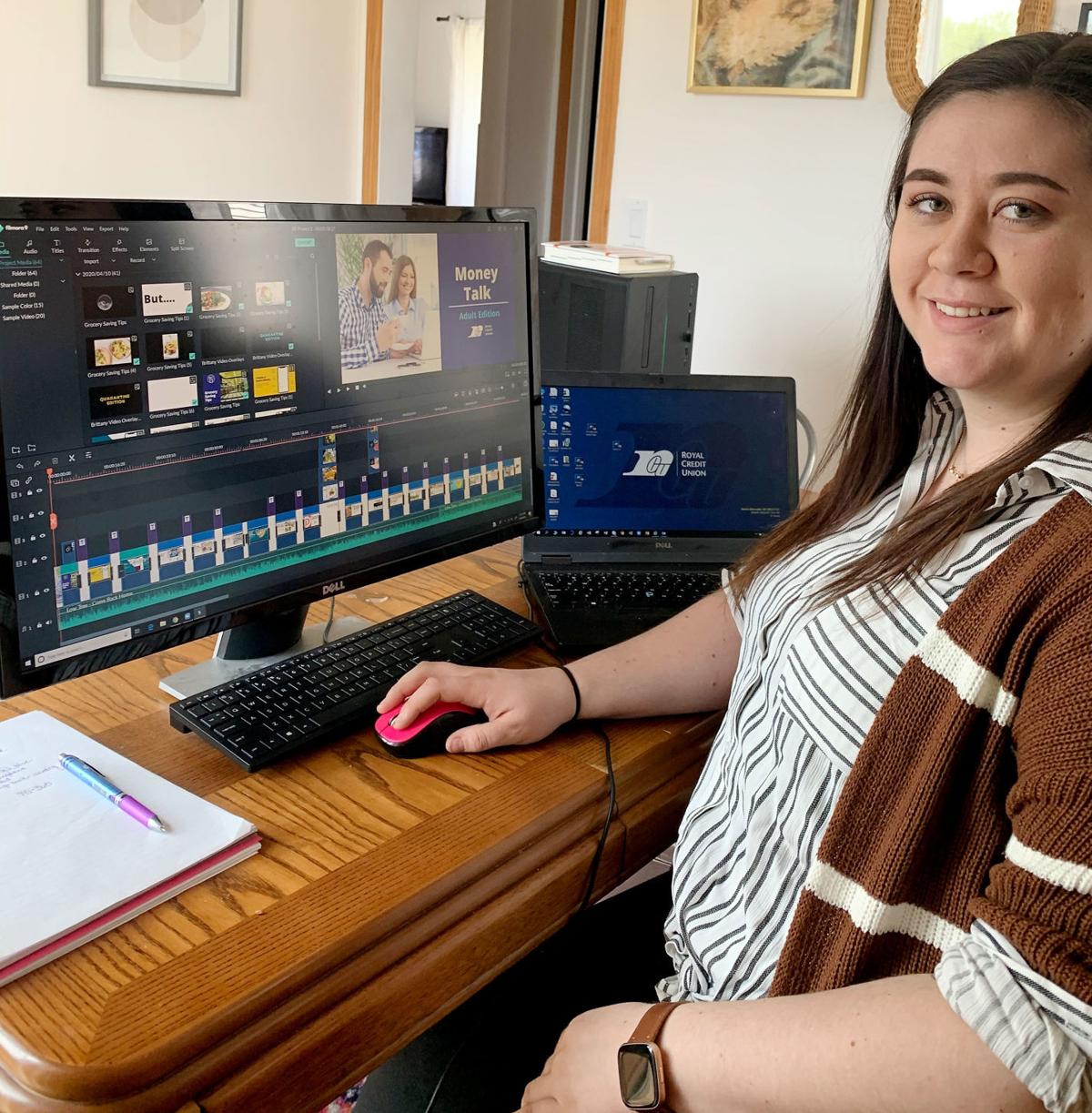 Brittany O’Malley, financial education supervisor for Eau Claire-based Royal Credit Union, works from her home in Minnesota. In the past year she’s learned to juggle the natural distractions one will encounter at home versus and office, but called the past year of doing so a “positive, life-changing experience.” 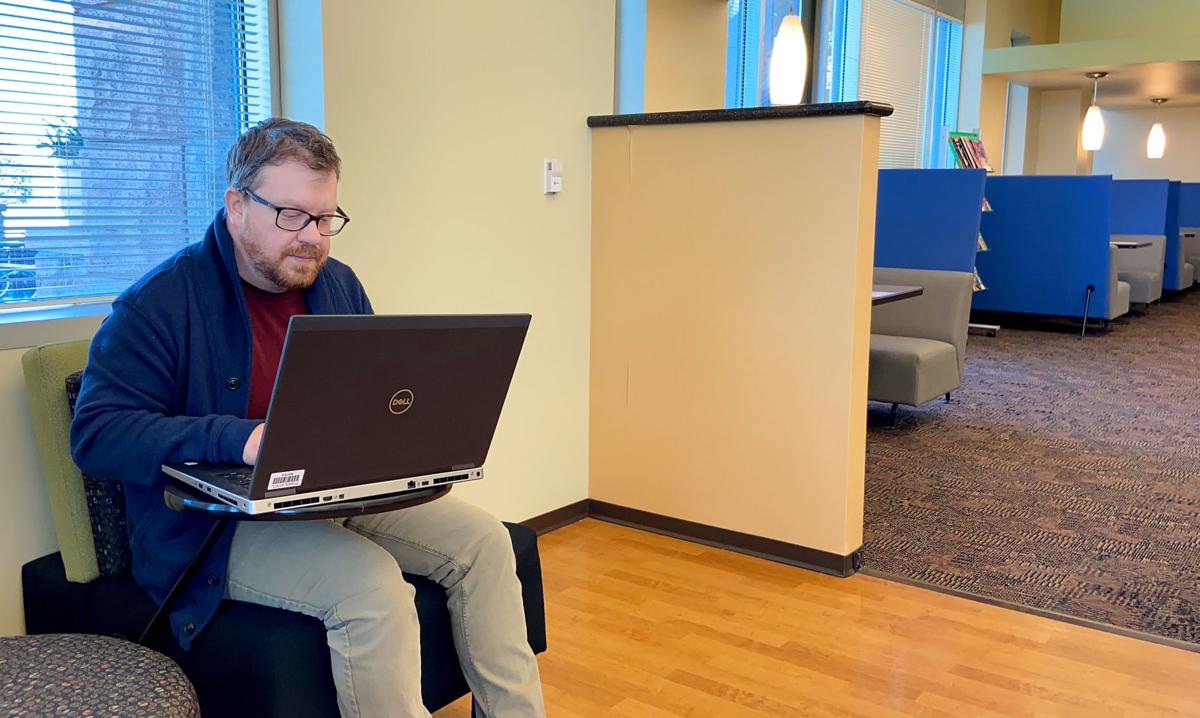 Steve Dayton, multimedia marketing coordinator, finds a temporary spot to do some work at RCU’s corporate center in downtown Eau Claire. More than half of the credit union’s employees are working from home during the pandemic, leaving its offices much quieter than normal. 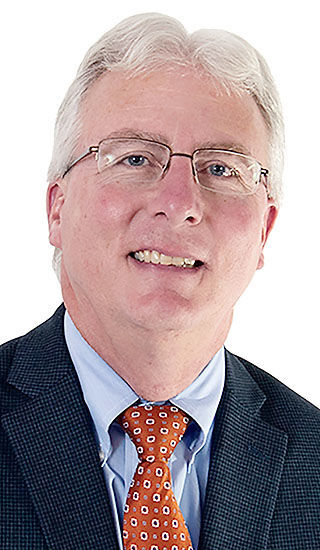 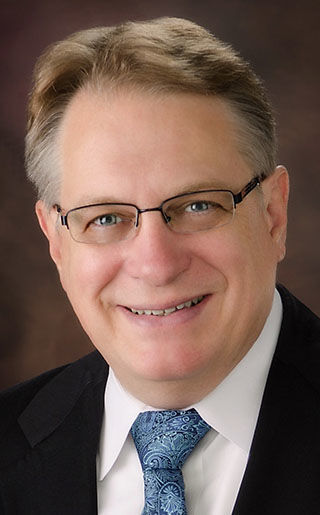 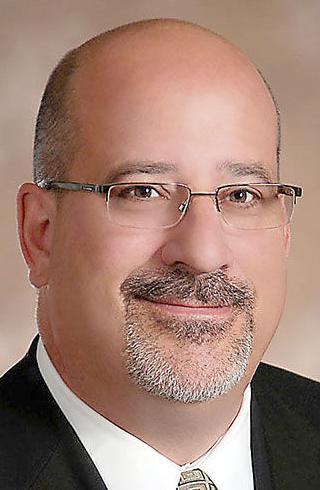 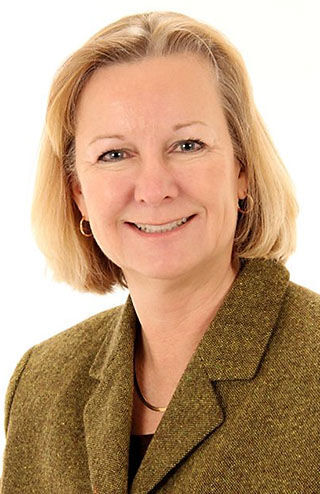 Realityworks employee Nate Schlieve works from home with his two rescue dogs, Dottie and River, in the basement office he’s created in his Eau Claire home. Though initially skeptical of shifting his workplace to his home, Schlieve has grown to like the arrangement that is expected to continue for most of the Eau Claire company’s employees even after COVID-19 is no longer a threat.

Brittany O’Malley, financial education supervisor for Eau Claire-based Royal Credit Union, works from her home in Minnesota. In the past year she’s learned to juggle the natural distractions one will encounter at home versus and office, but called the past year of doing so a “positive, life-changing experience.”

Steve Dayton, multimedia marketing coordinator, finds a temporary spot to do some work at RCU’s corporate center in downtown Eau Claire. More than half of the credit union’s employees are working from home during the pandemic, leaving its offices much quieter than normal.

Editor's note: This article originally appeared in the spring issue of Business Leader, a quarterly magazine produced by the Leader-Telegram. To see that edition and other special publications, go to leadertelegram.com/magazines.

EAU CLAIRE — Nate Schlieve’s commute to work takes less than a minute — the time it takes him to descend a flight of stairs to his basement office.

The product support technician for Realityworks was hesitant about the concept of working remotely when the Eau Claire-based company required it at the outset of the COVID-19 pandemic last March. His commute was already short and he feared it might be difficult to separate his work life from his home life.

But the transition has gone surprisingly smoothly, and after a year away from the office Schlieve isn’t sure he ever wants to go back.

“It hasn’t affected our department’s performance, and it hasn’t been a hindrance to my life at all,” he said. “I wasn’t sure it was going to work out, but my department found it’s one of the best things that’s happened to us. I think we’ve figured out how to communicate better than ever.”

After surveying employees and receiving a preponderance of similarly positive reviews, Realityworks officials changed course and determined that a majority of its workforce should continue working from home even after it’s safe to return to the office.

Wisconsin business leaders say many employers are still analyzing the impact of the sudden remote work experiment brought on by the pandemic, with the long-term result likely to be mixed across industries and companies.

Jim Morgan, vice president of business development and workforce strategies for the human resources consulting group MRA, said he has talked to Wisconsin CEOs who plan to have most workers stay remote indefinitely, to bring everyone back in the office as soon as possible and everything in between.

“There is no typical approach. It’s everything from soup to nuts,” said Morgan, who led a virtual session titled “Remote Work: The Forbidden Fruit or the Holy Grail” at the April 7 at the virtual human resources conference organized by the Eau Claire Area Chamber of Commerce.

Chamber President David Minor said he knows a lot of Chippewa Valley CEOs are wrestling with the issue as well.

“Working remotely was on our horizon, but now that horizon is on our doorstep,” Minor said. “It’s just going to be trial and error for a lot of people.”

Realityworks was so confident about its approach — with 71% of its 80 employees working from home — that it canceled plans to build a warehouse expansion and instead started remodeling a large portion of its existing offices into warehouse and engineering space, said Jessica Bierman, the company’s human resources manager.

“Overall, people enjoy working from home, even those who weren’t sure at first,” said Bierman, who mostly works remotely. “They like saving gas money, cutting their commute time and having lunch with their spouse and time with their pets.”

While customers occasionally might hear a dog barking in the background or catch a glimpse of his cat on his webcam, Schlieve said no one seems to mind and it doesn’t get in the way of business.

His only complaint about the hastily arranged new setup came in the first few weeks when he worked at the dining room table and sat all day on a hard dining room chair. The aches and pains associated with the poor ergonomics quickly faded away after Realityworks invited employees to clean out their offices and bring home any furniture and equipment they needed, Schlieve said.

To ensure Realityworks’ remote employees stay in the loop and don’t miss out on bonding with co-workers, the company offers updates at a couple massive Zoom meetings a month and plans to hold in-person events such as holiday parties and summer picnics when it is safe to do so.

At Eau Claire-based Royal Credit Union, where 58% of the roughly 650 employees are working from home, the virus accelerated a movement toward the kind of flexibility executives already had been exploring.

“We were already on a path to offer more flexibility at work, but obviously the pandemic forced the time frame up,” said Jan Johnson, RCU’s executive vice president of organizational agility.

The results have been promising and suggest the credit union likely will end up with a permanent blend of in-person and remote workers, with some possibly working a day or two a week in the office, she said.

“We don’t know exactly what it’s going to look like just yet,” Johnson said. “There probably will be a fair number of team members who will choose to work remotely, and we should be able to accommodate that for a lot of them.”

A key challenge, she said, is “figuring out how to do that without compromising or sacrificing our thriving culture.”

In the end, the determination likely will come down to what’s necessary for specific jobs in order to deliver top-notch service to members, she said.

Employee reaction has been across the board, she said, ranging from folks who wanted to work remotely and found they missed their co-workers to those who couldn’t imagine working from home and found they loved the new arrangement.

Brittany O’Malley, a financial education supervisor for RCU, has been working from her Minnesota home full time since March 2020.

“There have been a lot of ups and downs between learning how to juggle my fourth-grader doing virtual school and all of the natural distractions that you wouldn’t have in an office,” O’Malley said.

Overall, she called her year of remote work a “positive, life-changing experience” that helped her prove she can be successful working in multiple environments, changing her previous perception that home and work life need to be separated to maintain a healthy balance.

Before the pandemic, Schultz traveled to cities across Wisconsin two to four weeks per month to teach insurance pre-licensing to people starting careers in the insurance industry. Once the virus took hold, he began teaching via Zoom.

The change has been enormous for Schultz, who saves hundreds of hours of travel time, avoids scraping the ice off his vehicle’s windows on cold winter mornings and gets to spend more time with his wife of 41 years.

The virtual shift also pays dividends for the schools that hire him to teach because they save money by not paying his travel expenses.

“I would be very surprised if I were to teach in a classroom again,” said Schultz, who acknowledged that the change for just one person means a loss of hundreds of dollars a month in revenue for hotels, restaurants and gas stations.

As CEOs determine the long-term approach of their companies, they are weighing a variety of perceived pros and cons, Morgan and Minor said.

Potential negatives include losing corporate culture, measuring productivity and missing out on collaboration and team-building opportunities by not having employees see each other in person every day.

Minor said he knows of some people who moved to Eau Claire to escape the hassles of big city life when their Twin Cities employers told them they were free to work remotely from wherever they wanted, potentially creating a marketing opportunity for new residents.

Still, he predicted a lot of Eau Claire area companies will start bringing workers back to the office this summer once COVID-19 vaccinations have progressed further.

What Morgan called the “forced beta test” of companies quickly moving employees to remote work has been more positive than negative, he said.

With many younger workers already asking potential employers if they are flexible about remote work, some form of “yes” is essential in a tight labor market, Morgan said.

“With the talent pool being what it is, they’re kind of in charge,” he said, referring to workers in their 20s and 30s. “There’s no putting the genie back in the bottle with some of this stuff.”

Telework by the Numbers

More than a third of U.S. households surveyed in the last five months of 2020 reported working from home more frequently than before the COVID-19 pandemic, but the percentage who made the switch varied widely across sociodemographic groups, the U.S. Census Bureau reported.

Households with members who teleworked more frequently reported higher levels of income and education and better health than those in which no one changed their typical in-person work in response to the pandemic. According to the Census Bureau:

• Among those in poor health, 79.9% reported that no one in their household switched to telework or changed their telework habits, compared with  52.4% of those in excellent health.

• Those with a bachelor’s degree or higher were more than three times as likely — 61.7% compared to 19.1% — as those with a high school education or GED only to have an adult in their household substitute in-person work for telework.