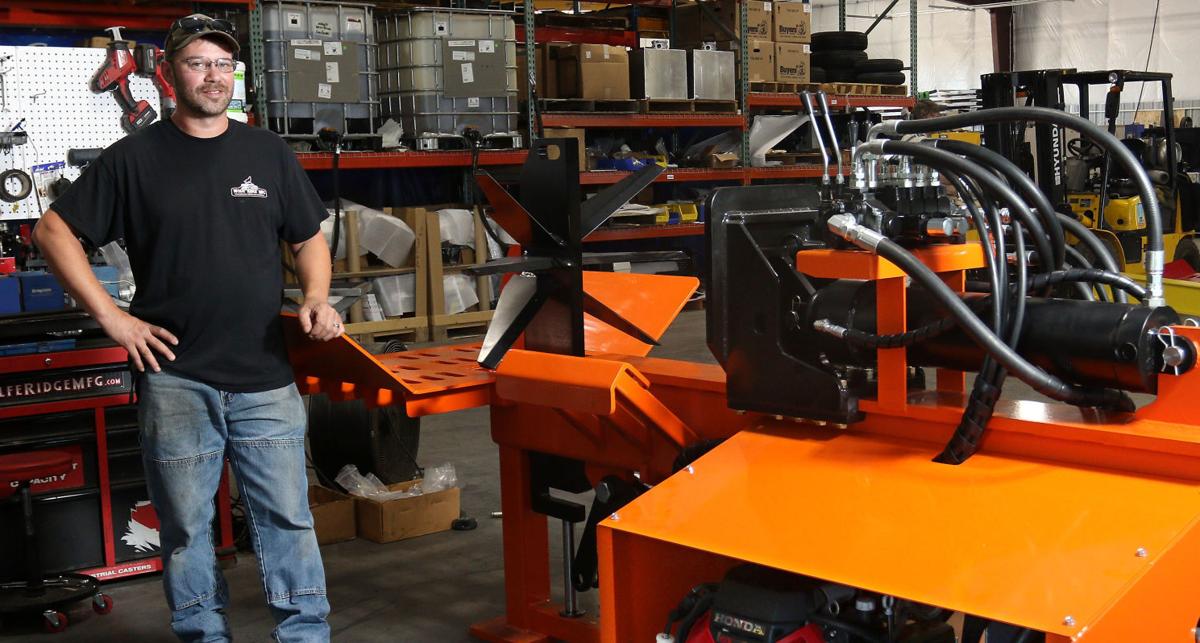 Chris Wolfe, owner of Wolfe Ridge Manufacturing, stands next to the largest model of log splitter made at his Eau Claire company. Started in his garage about five years ago, the business now employs just over a dozen people and has a new building on Anderson Drive. 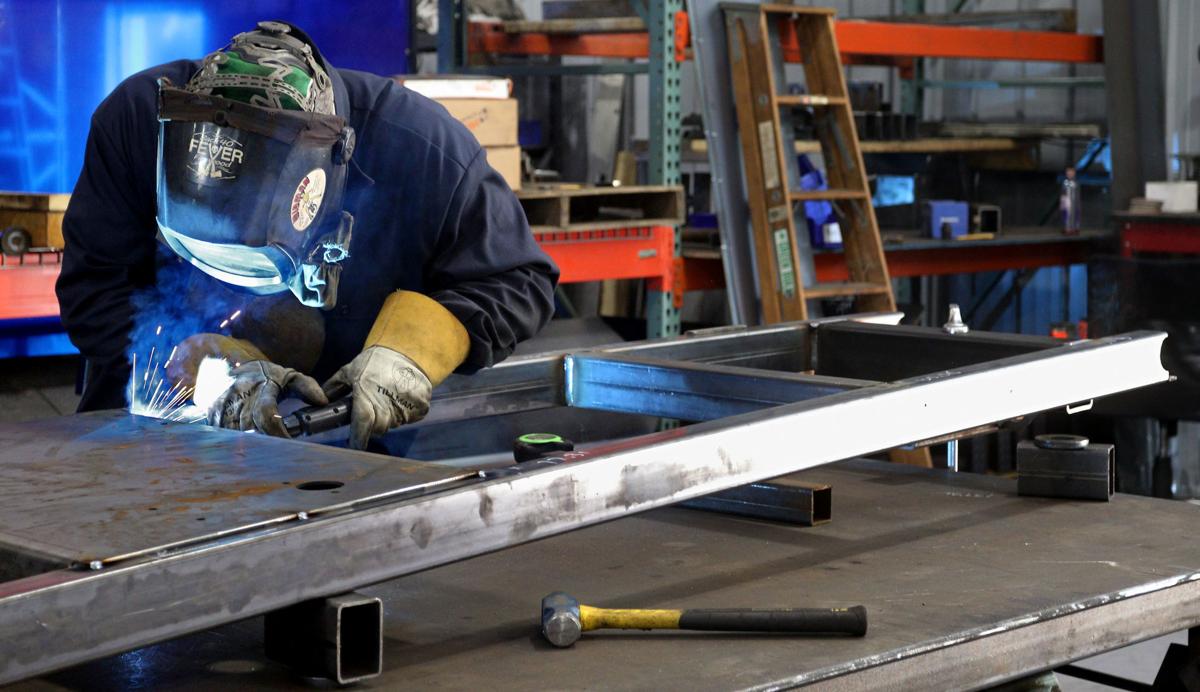 Welder David Kelly joins metal pieces together at his workstation on Aug. 21 at Wolfe Ridge Manufacturing. 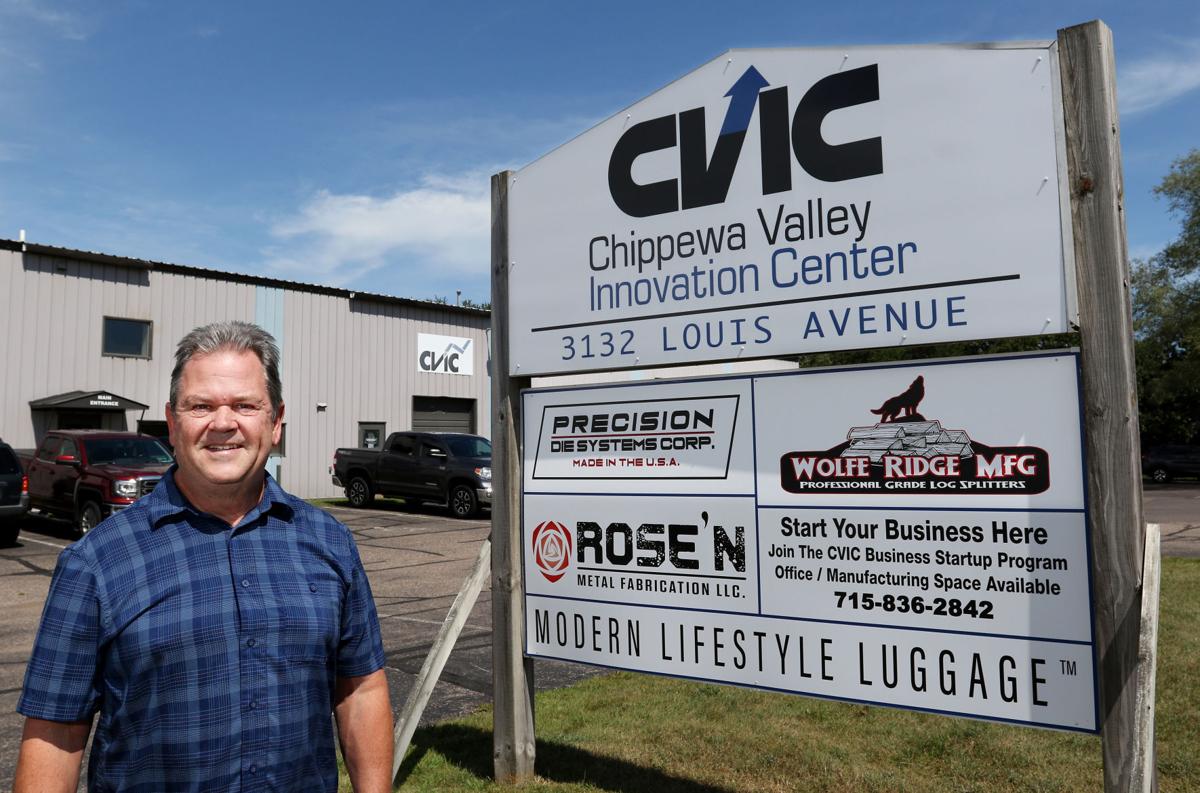 Mark Kalish, program and facility manager at Chippewa Valley Innovation Center, stands outside the nonprofit’s current facility on Eau Claire’s north side. The business incubator has had 63 companies graduate since it was established in 1986.

Chris Wolfe, owner of Wolfe Ridge Manufacturing, stands next to the largest model of log splitter made at his Eau Claire company. Started in his garage about five years ago, the business now employs just over a dozen people and has a new building on Anderson Drive.

Welder David Kelly joins metal pieces together at his workstation on Aug. 21 at Wolfe Ridge Manufacturing.

Mark Kalish, program and facility manager at Chippewa Valley Innovation Center, stands outside the nonprofit’s current facility on Eau Claire’s north side. The business incubator has had 63 companies graduate since it was established in 1986.

Editor’s note: This article originally appeared in the fall issue of Business Leader, a quarterly magazine produced by the Leader-Telegram. To see issues of that magazine and other special publications, go to leadertelegram.com/magazines.

Feeding his home’s hungry wood-fired boiler meant Chris Wolfe either had to love chopping logs or buy a machine to do it for him.

“I wanted to go fishing and hunting instead of splitting wood,” he said.

He bought a log splitter from a retail store and it did OK, but the experienced welder figured he could improve upon its design and add features to cut down on his labor.

Recently laid off from his job, Wolfe had the down-time and skills to tackle the project and went to work.

Starting from scratch, he spent two months designing his log splitter, which he then made at his home shop by combining a used engine, an old hydraulic cylinder and steel that he welded together. Aside from being able to churn out logs faster than his store-bought one, Wolfe also incorporated a device into his splitter that lifted logs into place so he didn’t have to heave them himself.

It worked great and kept the boiler at his Eau Claire home well fed, but he eventually had to put it up for sale to make ends meet.

“I just wanted to pay my bills,” Wolfe said.

To his surprise, offers to buy his homemade log splitter quickly flooded in.

After selling his prototype, the demand for more prompted Wolfe to build more, eventually churning out one a week from his shop.

“By necessity I had to keep going,” he said.

Wolfe had stumbled onto a niche audience for medium-duty log splitters — a market that includes tree services, firewood producers and fellow rural homeowners.

Wolfe Ridge Manufacturing was born in August 2015 in Wolfe’s garage and then became an officially incorporated company in 2016.

This summer, it moved into its new headquarters on Anderson Drive, a building that Wolfe designed himself to maximize the flow of production.

But in between its beginnings in his home workshop and its brand-new facility, Wolfe Ridge spent about three years in a business incubator on Eau Claire’s north side.

The large manufacturing bays that Wolfe had rented at Chippewa Valley Innovation Center, 3132 Louis Ave., were vacant in late August, but they weren’t expected to stay that way for long.

Mark Kalish, CVIC program and facility manager, had a trio of startup businesses to consider for filling that space.

That is CVIC’s main attraction to entrepreneurs — a building with rents that start well below market rate, but it still features heavy-duty utilities, a loading dock and other necessities for industrial companies.

“There isn’t a lot of available space, especially small space with this infrastructure,” Kalish said.

The CVIC rents out space by the square foot, allowing fledgling businesses to lease even a small niche or office in the building when starting out, but then expand to multiple bays when their growth warrants it and space in the facility is available.

When businesses first arrive at CVIC, their rents are cheap.

Wolfe recalls it cost him a third the price that other industrial landlords were charging at the time he moved into CVIC.

The rental rate does go up the longer companies stay, reaching market prices at year five when they are ideally expected to graduate from CVIC. Clients generally spend three to five years at the center, Kalish said.

Wolfe is the most recent company to move out of CVIC into its own building.

Precision Die Systems Corp. is currently the largest tenant in the center, growing to multiple bays in CVIC. One of the recent arrivals to the building is Rose’n Metal Fabrication, occupying one bay on the end of the building.

Vacancies have been rare recently, Kalish said, with the center being fully occupied for the past three years.

In addition to serving as landlord for CVIC, Kalish also provides his expertise as someone who can relate to the tenants and give advice.

“Being an entrepreneur myself, I feel that I can speak their language,” he said.

Kalish started his own powder coating business, which he sold in 2016, but can still literally keep an eye on as Eclipse Powder Coating is visible from the CVIC’s back door. Kalish still owns World’s Best Products — a company that makes the Mighty Mount, a stand for testing vehicle engines.

In addition to Kalish’s own advice to tenants, he connects them with local resources that can teach marketing, bookkeeping and other skills necessary in business.

Those lessons were crucial for Wolfe as his small company began to grow.

A welder by trade, Wolfe didn’t know accounting, but through CVIC he got help creating a business plan, information on setting sustainable prices and other lessons that have helped him manage his company.

Wolfe also learned how to use the Internet to get the word out about his products through social media and videos of his log splitters in action.

“YouTube is really the one that sells stuff,” he said. “Instead of paying for a commercial, we made our own.”

The viral marketing is strong enough that Wolfe Ridge hasn’t had to do traditional advertising as customers have instead found them and kept the business busy.

Wolfe Ridge doesn’t have any display models for potential customers because they haven’t had to build any and are just trying to keep up with demand.

In late summer, the company let customers know it needed eight weeks to fulfill their orders as they were so busy.

A dozen log splitters are produced at Wolfe Ridge every week. The company also makes conveyors for moving logs from the splitter into a truck or wood pile. About one of those is made per week.

Last year the company produced 260 log splitters, but it is on pace to hit 500 this year.

That’s been the trend since the business started.

“Every year we’ve doubled the amount of output,” Wolfe said.

Sales of products have already paid off a significant portion of the company’s brand new building and Wolfe is contemplating an expansion next year.

Business has been doing well during the COVID-19 pandemic, significantly better than Wolfe had expected.

“It actually made us busier,” he said.

When it first was declared he laid three employees off, but quickly called them all back to keep up with orders. Wolfe attributed the strong sales to people doing more yard and landscaping projects while they were stuck at home during the economy’s partial shutdown.

The 13 employees who work at Wolfe Ridge are among more than 600 jobs that CVIC counts from businesses that have resided at the center at some point.

Since it began in 1986, 63 businesses have graduated from the facility. That roster has numerous industrial firms such as Advanced Laser Machining, service companies including Pop-A-Lock and Merry Maids, refuse hauler and composter Earthbound Environmental Solutions and many others.

Ray French, president of CVIC’s board of directors, attributes the facility’s success to those who were involved in creating the center and continue to be a part of it.

“What’s special about CVIC is we bring a lot of partners in the region together,” he said.

The City of Eau Claire, Eau Claire and Chippewa county governments, and the economic development corporations operating in both of those counties are partners in the CVIC, and several area businesses are private sponsors.

Operated as a private nonprofit, about 80% of the center’s budget comes from rent, but the remaining portion is split between public and private sector support. Companies including Xcel Energy and McDonough Manufacturing, several area banks and some former CVIC tenants pitch in as sponsors.

French, who started on the board in 2016 while working for Eau Claire’s economic development division, attributes his enduring interest in CVIC to its ability to help those with the drive to be entrepreneurs.

“To be able to grow something from an idea to something tangible to a business where you’re employing other people to achieve your dream is a pretty magical thing,” he said.