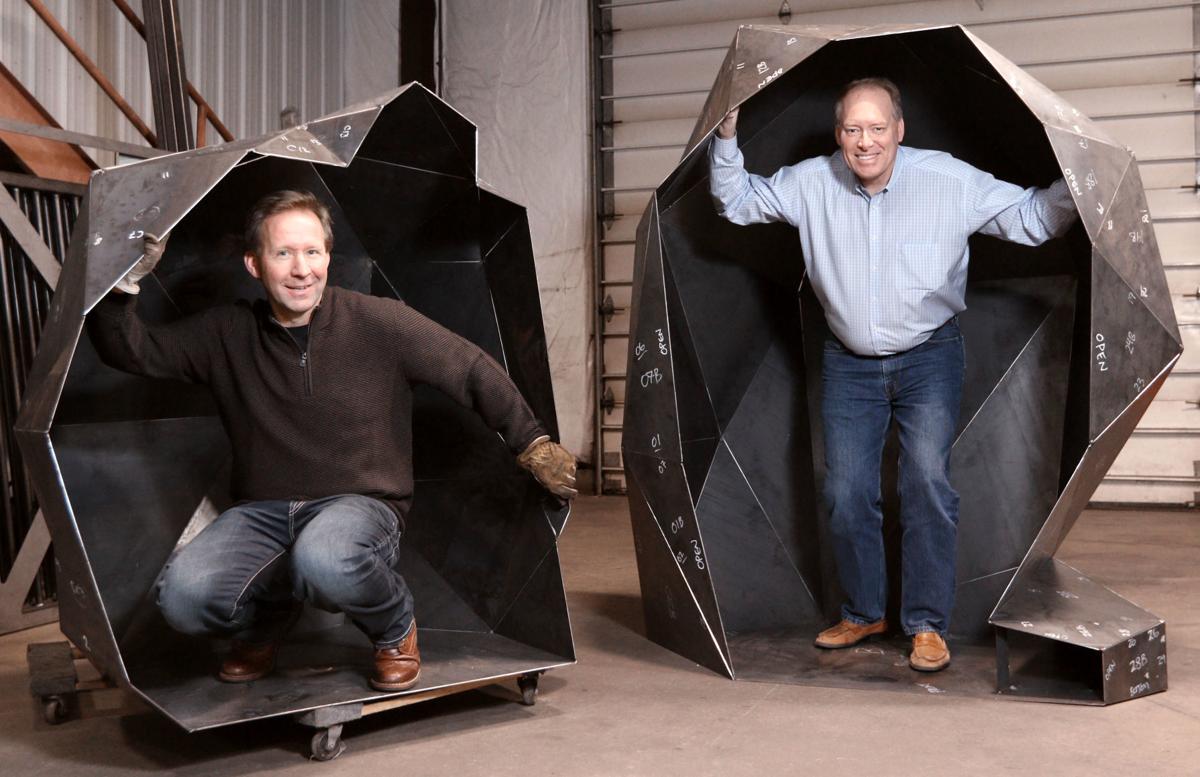 Greg Johnson, left, and Brian Graff of Eau Claire-based solar design company Solar Forma pose on Jan. 3 in the beginning stages of a three-piece solar interactive sculpture of trolls which will be located in Altoona’s River Prairie development later this year. 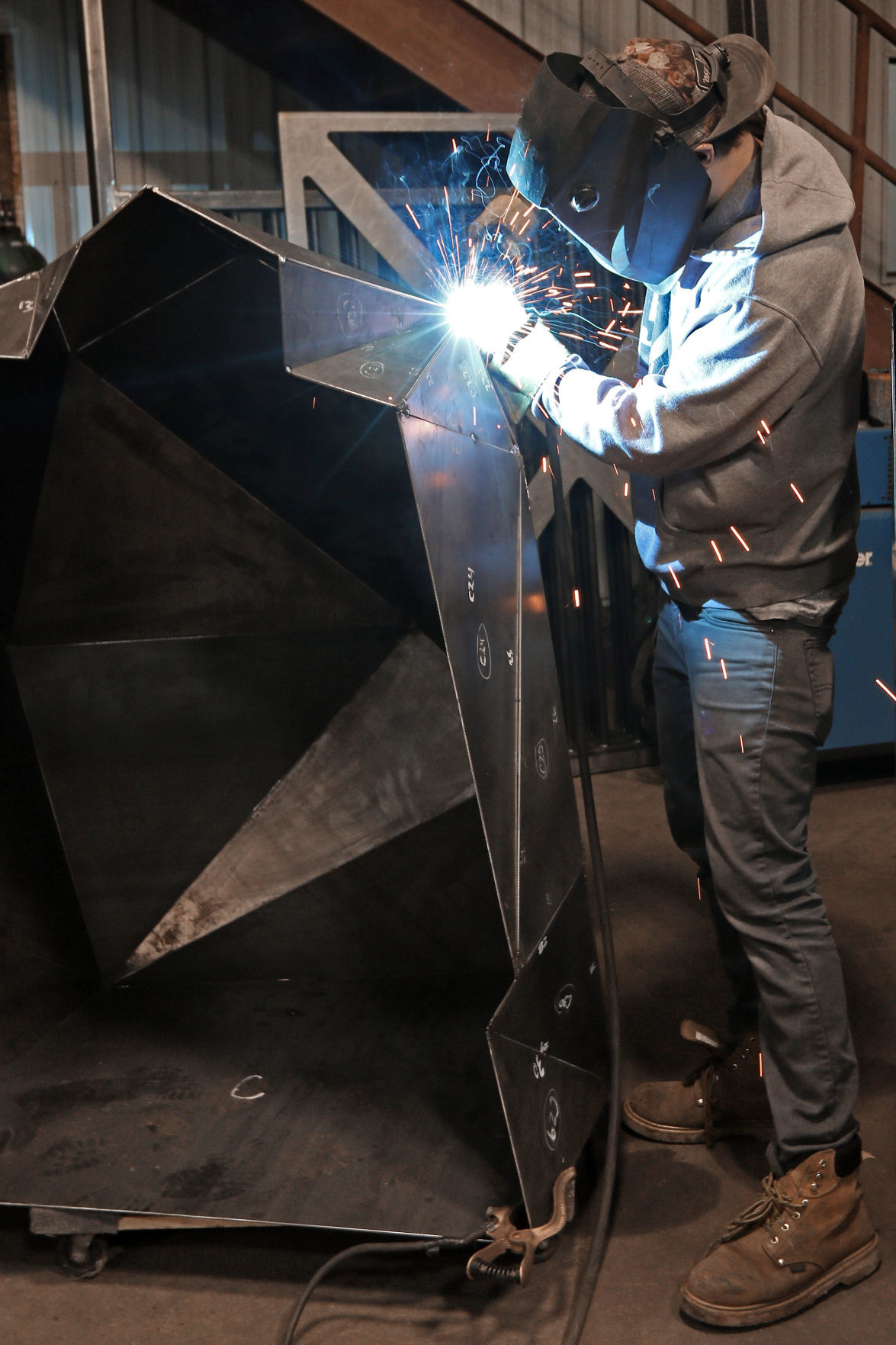 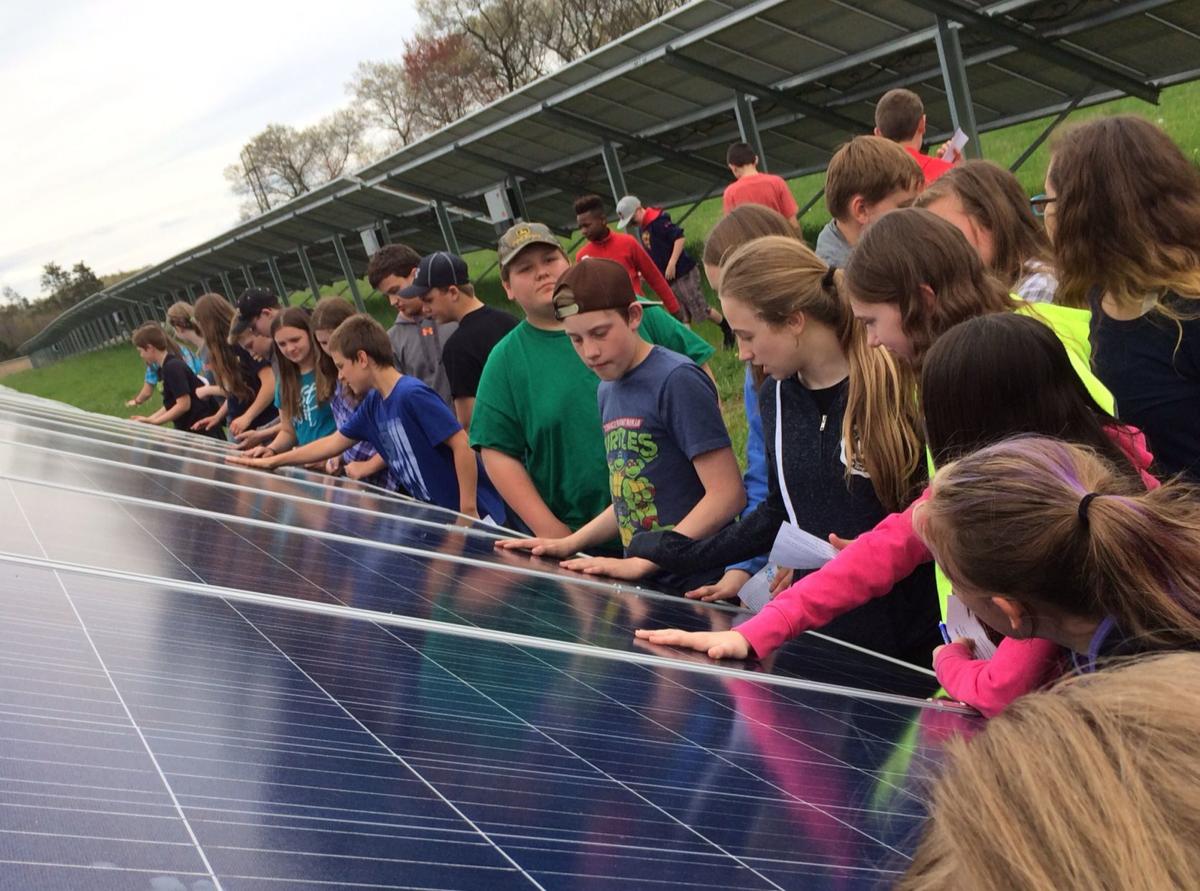 Greg Johnson, left, and Brian Graff of Eau Claire-based solar design company Solar Forma pose on Jan. 3 in the beginning stages of a three-piece solar interactive sculpture of trolls which will be located in Altoona’s River Prairie development later this year.

Editor’s note: This story originally appeared in the winter edition of Business Leader, a quarterly magazine produced by the Leader-Telegram. To see that issue and other special publications, go online to leadertelegram.com /magazines.

Interested in powering your dishwasher or charging your phone using the sun?

If you can’t install your own solar panels, there’s another option − subscribing to a solar energy program from a Chippewa Valley energy provider.

Solar power is also starting to light up the local business community too. Eau Claire area businesses, municipalities and organizations are beginning to mull larger-scale energy projects, from solar-powered art in public parks to ambitious renewable energy use goals.

One of Eau Claire’s newest design firms is even putting solar power at the heart of its business model.

Solar Forma, based at Artisan Forge Studios on Eau Claire’s south side, is aimed at designing infrastructure, large artwork and sculptures that incorporate solar panels. Its owners hope to create pieces that are both functional and eye-catching.

“When you take a building or scenescape and you drop solar panels into it, sometimes it’s not the greatest looking,” said Brian Graff, Solar Forma’s president of business operations. “We try to incorporate them more into the architecture … to hopefully accelerate the transition to solar.”

Solar Forma began in March 2019. Graff and Greg Johnson, Solar Forma partner and owner of Artisan Forge Metalworks, hope to work on projects across the country and the world.

One of Solar Forma’s first projects might be their most memorable: Three steel troll sculptures, ranging from 4 to 6 feet tall, will be installed in Altoona’s River Prairie development in May 2020.

When touched, the trolls − dubbed “sound sculptures” − are planned to emit solar-powered light and “low, rhythmic sounds,” according to a design overview by Karl-Johan Ekeroth of PINPIN Studio based in Gothenburg, Sweden. Solar Forma is collaborating with Ekeroth to build the trolls’ solar elements.

Graff acknowledges the challenges of designing using the silicon solar cells that form solar panels. (The panels, which are typically made of silicon “semiconductor” material, collect energy by absorbing and converting sunlight, according to the Department of Energy.)

“People want the inspired designs, but they also want cost effectiveness,” Graff said. “We’ve had to set an operating goal that our more inspired designs won’t degrade the power generation capabilities by more than 10% of a conventional array.”

A Solar Forma project with the city of Eau Claire is also in the works, Graff said. (City leaders have indicated an interest in moving toward cleaner energy; in 2018 the Eau Claire City Council passed a resolution saying the city and community should use 100% renewable energy by 2050.)

“The tech has advanced,” he said. “As the technology has grown in its reliability and in its pervasiveness … people are more trusting of it to be a primary, highly-relied-upon secondary source of power.”

About 238 people get some or all of their power through ECEC’s solar array, said co-op CEO and president Lynn Thompson.

The solar subscription model works especially because mounting solar panels on a house is a “20-year investment,” Thompson said: “I think the largest barrier is just the long-term commitment. If you’re going to put, buy solar, you’re looking at a 20-year type of investment. Are you going to be in the same location for 20 years? For a lot of people, the answer is no.”

Thompson doesn’t have immediate plans to expand the subscription program, however.

“It took us over a year to get it fully subscribed, when we first started offering it,” Thompson said. “People were interested, it was a new concept, and I think we got those folks interested in it on board early.”

Xcel Energy’s one-megawatt solar garden in Eau Claire produces energy that the company provides to some customers through its Solar Connect Community program. The Eau Claire solar garden opened in October 2017, and the program is fully subscribed with about 140 residential and business customers, said Xcel spokeswoman Chris Ouellette.

The solar garden model appeals to renters or people who don’t want to build, install and maintain a solar array at their residence, Ouellette said. The program isn’t limited to people who live in Eau Claire, or in Cashton or Ashland — other locations where Xcel also has solar gardens.

Growing interest in solar power is one of the reasons Xcel piloted the solar project, Ouellette said. It doesn’t hurt that technology advances are slowly making solar power cheaper and more efficient.

“The cost of solar energy has come down in the last five years. The price of solar — the panels, the actual equipment — has dropped about 60%,” Ouellette said.

Thompson agreed: “If you’re buying something like this, and it’s going to be around for 20 years, you don’t want to be too early to it.”

Private businesses and public entities are stepping up to the plate for their own roof-mounted solar arrays.

The Eau Claire school district plans to mount donated solar panels on the roofs of Memorial and North high schools as soon as this summer, if it can raise about $250,000 to cover installation and maintenance costs.

The twin 100-kilowatt, 360-panel solar arrays are expected to save the school district about $20,000 per year on its utility bills.

Half the panels were donated by Memorial alumnus Cal Couillard of the Couillard Solar Foundation. An anonymous donor plans to contribute another 360 panels when the maintenance money is raised.

Couillard, who lives in Deerfield, said he hopes the project inspires Memorial and North students to look for careers in renewable energy.

“Look around and see it. We’re not moving very fast to solve their problem,” Couillard said at a December news conference in Eau Claire. “Having (solar panels) on their schools lets them know they can be part of this.”

Solar power will also get a shoutout at the Farm Technology Days 2020 event in Eau Claire in July. Horseradish grower Huntsinger Farms, parent company of Silver Spring Foods, said in December it would install 288 solar panels on its Eau Claire farm this spring after being awarded a $29,000 Focus On Energy grant.

It will be one of the first farm solar installations in Wisconsin, generating about 144,000 kilowatt hours of energy per year, Huntsinger Farms said in a news release.

The farm, which is hosting Farm Technology Days 2020, plans to offer tours of the new solar field at the event.

He added: “We hope that other farmers across Wisconsin will come and see the solar field during Farm Technology Days and discover how they can install solar on their own farms too.”