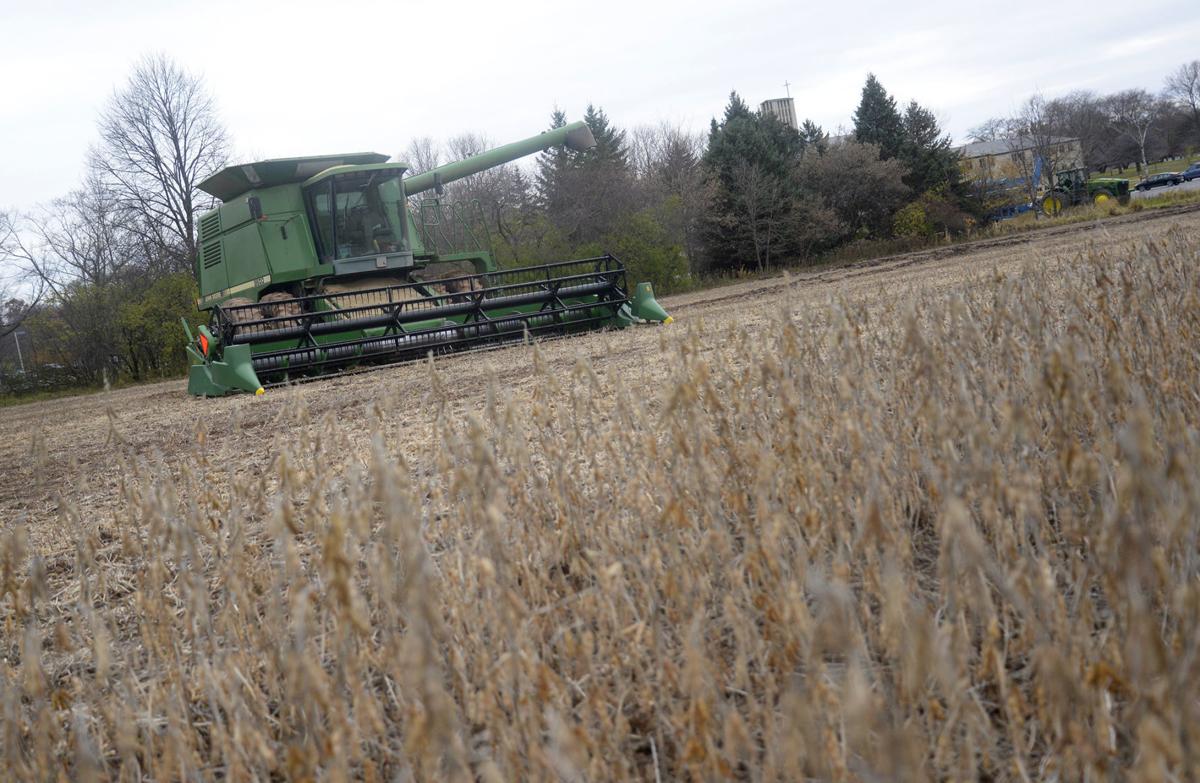 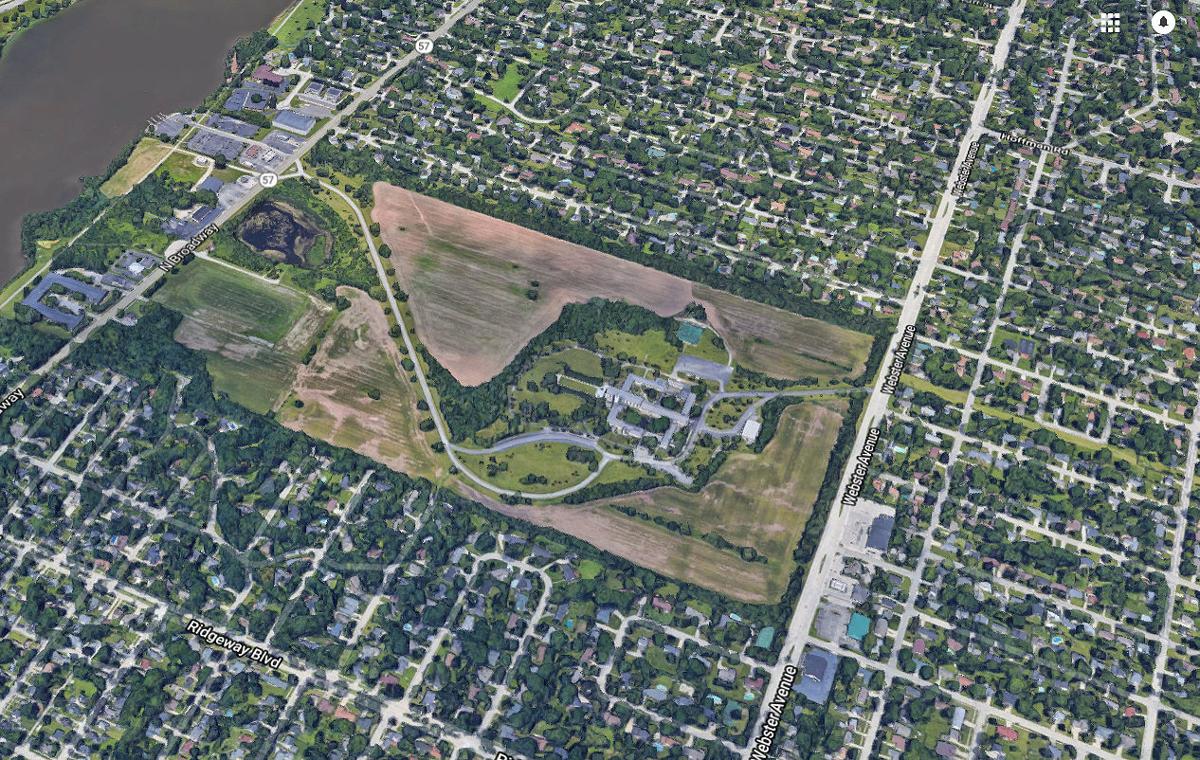 An aerial view of the farmland surrounding St. Norbert Abbey, which is bordered by the city of De Pere and village of Allouez.

An aerial view of the farmland surrounding St. Norbert Abbey, which is bordered by the city of De Pere and village of Allouez.

But what makes his operation unique isn’t the number of acres — it’s their location.

For the past four decades, the Allen family’s cropland has included 80 acres owned by the Norbertine Community of St. Norbert Abbey. The religious order’s 158 total acres house a church and related buildings, which are virtually surrounded by crops.

In addition, the Norbertines’ tranquil property, acquired in the 1950s, is bordered on the east and west by heavily trafficked streets, and on the north and south by residential areas in the city of De Pere and village of Allouez, communities in the greater Green Bay metropolitan area.

“It’s definitely a little different than the other acres I farm. But I like it,” said Allen, 66, whose farm is eight miles away in the rural Brown County town of Glenmore.

“Everyone at the abbey treats me extremely well. In return, I treat them really well. I make sure there’s no mud on the roads — I pressure wash the tires before we go back through the city after we’re done with the harvest. We’ve always had a very good relationship. It works out for everybody.”

Fr. John Kastenholz, who serves as the liaison between the abbey and Allen, said the Norbertines are pleased with their long-standing partnership.

“He’s been doing this for many years, and it has gone very smooth,” Kastenholz said. “We like to use the land for useful purposes, and he maintains it well. He alternates the types of crops he plants, and we have a lot less land to mow now too.”

The Norbertine Community of St. Norbert Abbey has roots dating back to Norbert of Xanten in the 12th century. Its mission today is to be of service to area Catholic churches, especially by way of serving as pastors and ministers in area parishes and in managing and promoting Catholic schools and education.

Allen recently finished harvesting soybeans at the abbey, after poor weather conditions this fall kept him out of the fields longer than he anticipated. All of the abbey’s 80 acres of farmland feature one crop per season.

“Originally, I was planning on switching to wheat next season, but now it’s looking more like corn,” Allen said.

The logistics of farming in the middle of a city requires careful planning, Allen said.

“You’ve got to be super cautious when you’re driving to the abbey and leaving there,” Allen said. “It’s not like driving in a field in the country where you can relax. You have to be extra alert. You have to be prepared for unexpected things to happen. And you have to pick a time when traffic might not be as heavy. We don’t want to go there during rush hour.”

“Last year we broke a hydrostatic hose on the corner of Webster and George streets (which can be a congested intersection),” he said. “They helped me out — stayed until someone came and put a new hose on.

“Another time, when Webster was being worked on, they called me and gave me a police escort right down Main Street. You don’t get a lot of police escorts like that in the country.”

Allen’s farming roots date back decades. His late parents, Alvin and Alice, bought a dairy farm and 160 acres in 1935. Of their 11 children, Allen was the youngest boy and fourth youngest overall. At the age of 5 he began milking the herd of 32 black and white Holsteins.

Allen’s father retired in the mid-1980s, so Allen and several siblings formed a partnership to continue dairy farming. Over time, the partnership whittled down to Allen.

After years of dealing with lingering problems relating to stray voltage, Allen auctioned off the cattle in 2004 and has been crop farming ever since. The 750 acres he farms includes owned and rented land, including the abbey’s 80 acres.

Allen’s mother worked in the abbey’s kitchen, which is how the family found out about the farming opportunity.

“The people at the abbey were looking for somebody to rent it and farm it,” said Allen, noting his sister, Yvonne Baumann, also worked in the abbey kitchen for several years. “My dad agreed to farm the land, and we’re still doing it today.”

Interestingly, Allen said, “My mom’s claim to fame from working there was one time (Green Bay Packers coach Vince) Lombardi brought the team there to eat and my mom was in charge of ordering the steaks. She ordered the right amount of steaks, but they ended up one steak short because Lombardi brought one extra person. So he came in the kitchen and chewed my mom out. She kind of chuckled about it.”

In his younger days, Allen regularly traveled to the abbey with his father.

“We always rotated corn and alfalfa and would haul the hay home with chopper boxes — that distance (eight miles each way) was quite a hike,” he said. “And there were times back then we’d be changing wagon tires in traffic when we were hauling hay.

Because the abbey’s farmland is a few hundred yards east of the Fox River and adjacent to a sizable pond, wildlife can take a toll on Allen’s crops. He estimates Canada geese damaged about five acres of soybeans this year and spread waterhemp in the process. White-tailed deer also frequently traverse the grounds.

Nonetheless, Allen said, “because everybody at the abbey is good to work with, I just put up with the wildlife damage and move on to the next season.”

And it’s nice, he said, to connect with the abbey’s neighbors, even in passing.

“You see a lot of older people who’ll stop on the sidewalk and watch us planting and harvesting,” Allen said. “You can tell they were farm people who now live in that area. They all wave at me.”