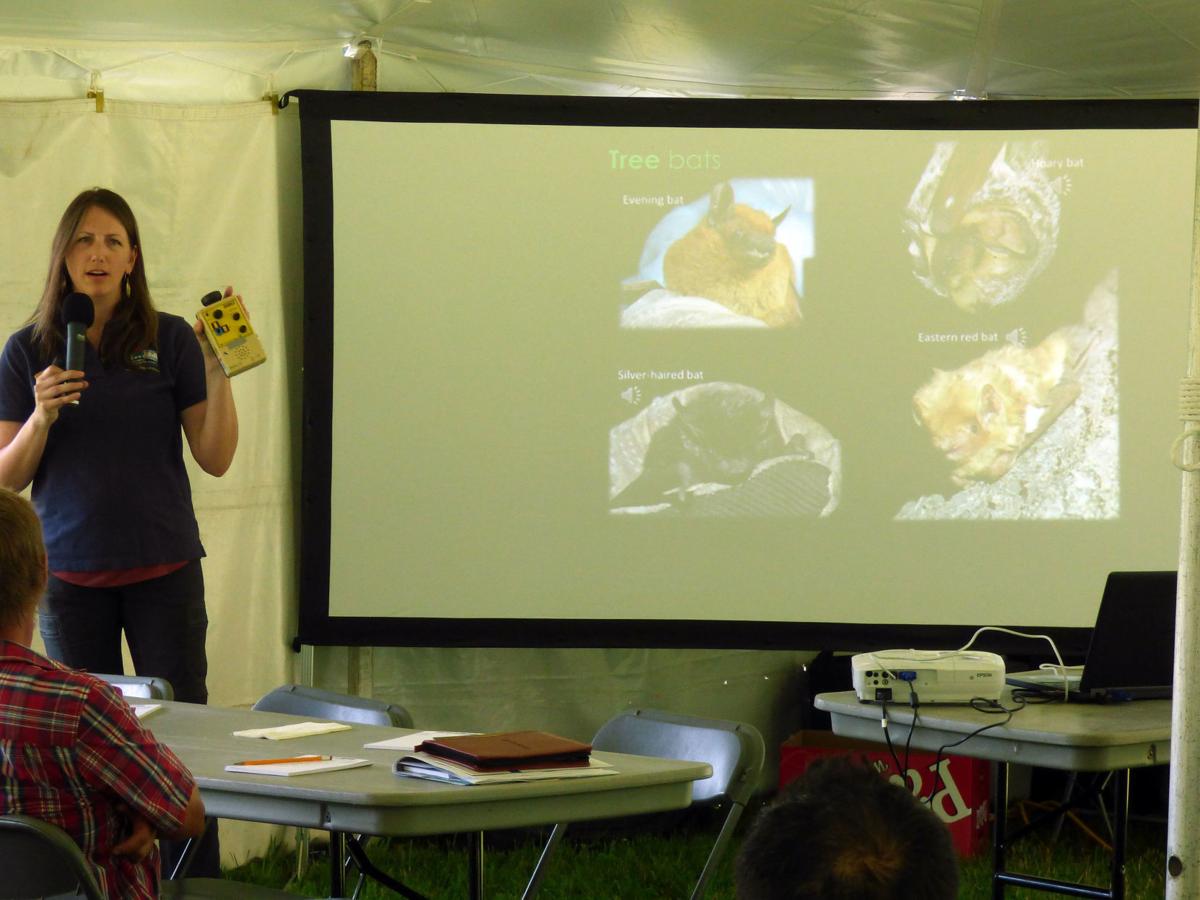 Jennifer Redell of the Wisconsin Department of Natural Resources discussed how bats can benefit orchards during a Wisconsin Apple Growers Association field day at Bushel & A Peck Orchard and Market in Chippewa Falls. 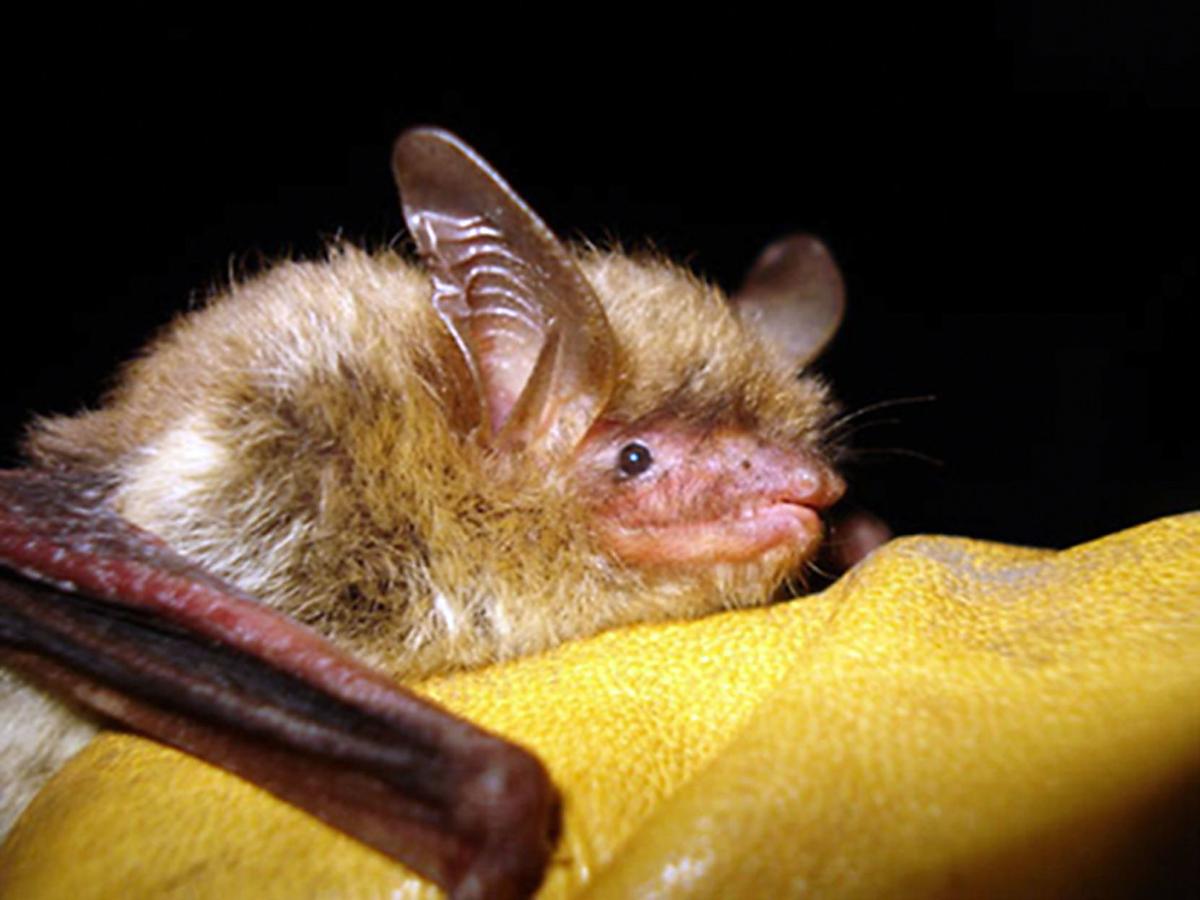 The northern long-eared bat, one of North America’s most widely distributed bats, has been declared a threatened species because of the spread of white-nose syndrome.

Jennifer Redell of the Wisconsin Department of Natural Resources discussed how bats can benefit orchards during a Wisconsin Apple Growers Association field day at Bushel & A Peck Orchard and Market in Chippewa Falls.

The northern long-eared bat, one of North America’s most widely distributed bats, has been declared a threatened species because of the spread of white-nose syndrome.

CHIPPEWA FALLS — A 2012 study showed bats in Wisconsin were saving farmers between $658 million and $1.5 billion every year in pesticide-application costs, according to Wisconsin Department of Natural Resources Conservation Biologist Jennifer Redell.

But since the appearance of white-nose syndrome in Wisconsin in 2014, cave bat populations in the state have been in rapid decline.

“We know that bats are valuable to agriculture,” Redell said July 11 during a Wisconsin Apple Growers Association field day at Bushel & A Peck Orchard and Market in Chippewa Falls. “Unfortunately, because bats have historically been misunderstood and therefore underfunded and understudied, there’s not a lot of research on bats in general.”

A bat can eat thousands of insects every night, making them an important form of natural pest control. Redell said a single little brown bat can eat up to a thousand mosquito-sized insects in and hour and will eat up to her body weight in insects each night if she’s a nursing female.

“They’re really hungry,” Redell said. “They are the primary predator of flying insects. We want them to be well-fed.”

White-nose syndrome has now spread from coast to coast after its discovery in New York state in 2006 with California releasing news of a positive finding in early July. The fungus, which only affects bat species that hibernate in caves, has killed millions of bats. Some of the most common bat species have seen declines of 95 to 99 percent, Redell said.

The fungus that causes white-nose syndrome thrives in the cold environments where bats hibernate. Bats with white-nose syndrome often display a white fungus on their noses and on other hairless parts of their bodies, including their wings. White-nose syndrome causes bats to wake up during hibernation. If they wake up too often, they’ll use up too much of their fat reserves and starve.

“Most of the bat’s year, six or seven months, are spent underground in a cave or mine,” Redell said. “It’s like walking to your refrigerator for six or seven months and finding it empty. There’s no food available for them at that time.”

On a 2012 bat survey on a lake in Vilas County, acoustic monitoring uncovered several species making about 200 different bat passes per hour. When that survey was re-created in 2017, it showed one big brown bat left on the lake after white-nose syndrome went through the area.

“We’re looking at regional extinctions at this point,” Redell said. “It’s very concerning to us as bat biologists. Half of our bat species are at risk.”

“We used to have tens of thousands of bats at each of those three mines,” Redell said. “Those numbers are down significantly due to white-nose syndrome.”

Redell said researchers are looking at three possible areas of disease management for white-nose syndrome. The pathogen is highly susceptible to ultraviolet light, giving researchers hope that could be a way to control the disease. They are also looking at decontaminating mines during the times of the year when bats are away from the hibernation sites, and the development of a vaccine that could be administered as a gel the bats would climb through when entering a roost and then ingest during grooming.

“White-nose syndrome is causing the most precipitous decline in North American wildlife in recorded history,” Redell said. “Bats do need everybody to help out. Bats are still misunderstood, so we are still trying to get the positive messages out about their benefits.”