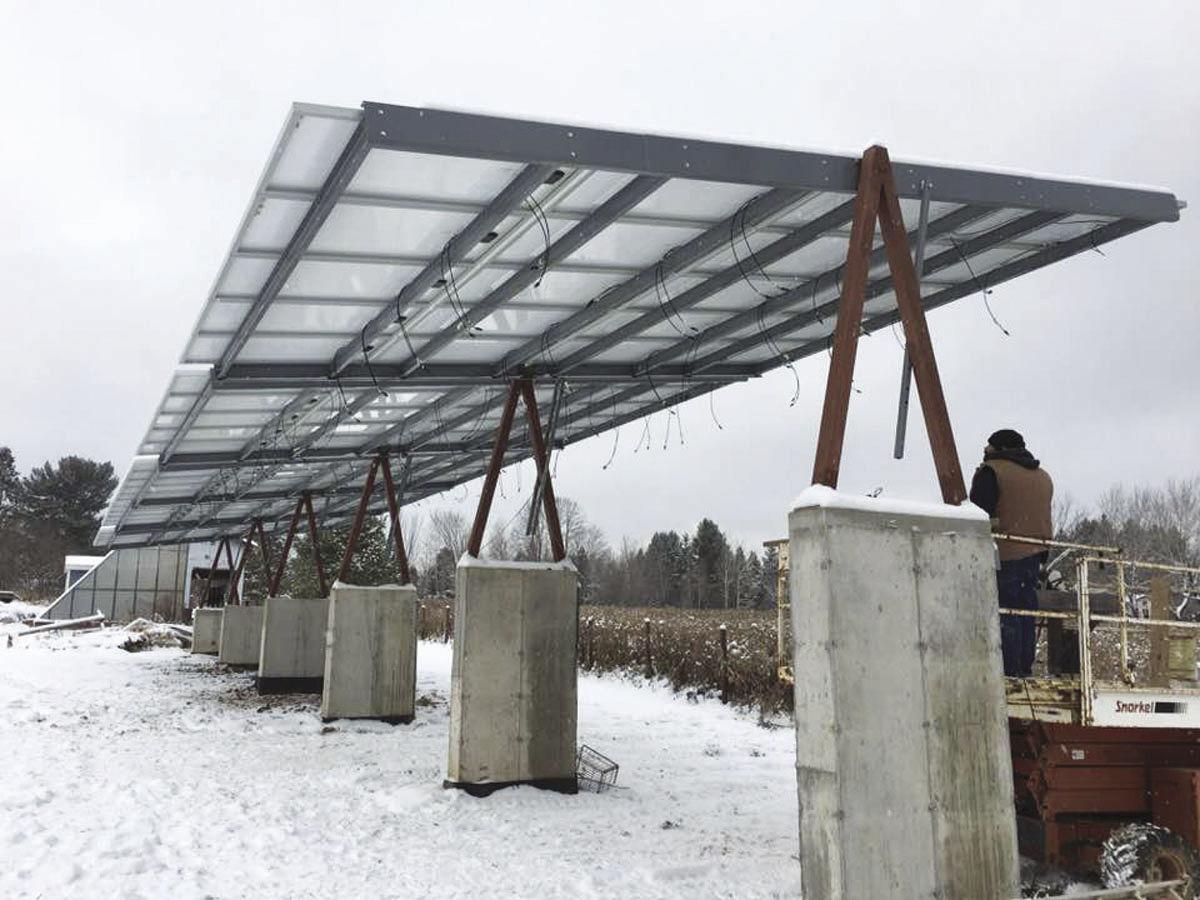 Eric and Linda Magnuson created this large solar array that generates enough electricity to power home and a surplus to sell to the power company. The system sits on six large pillars seated five feet in the ground, below the frost line, to keep the system stable. Each of the five solar segments can be tilted to best capture sunlight during different times of the year. 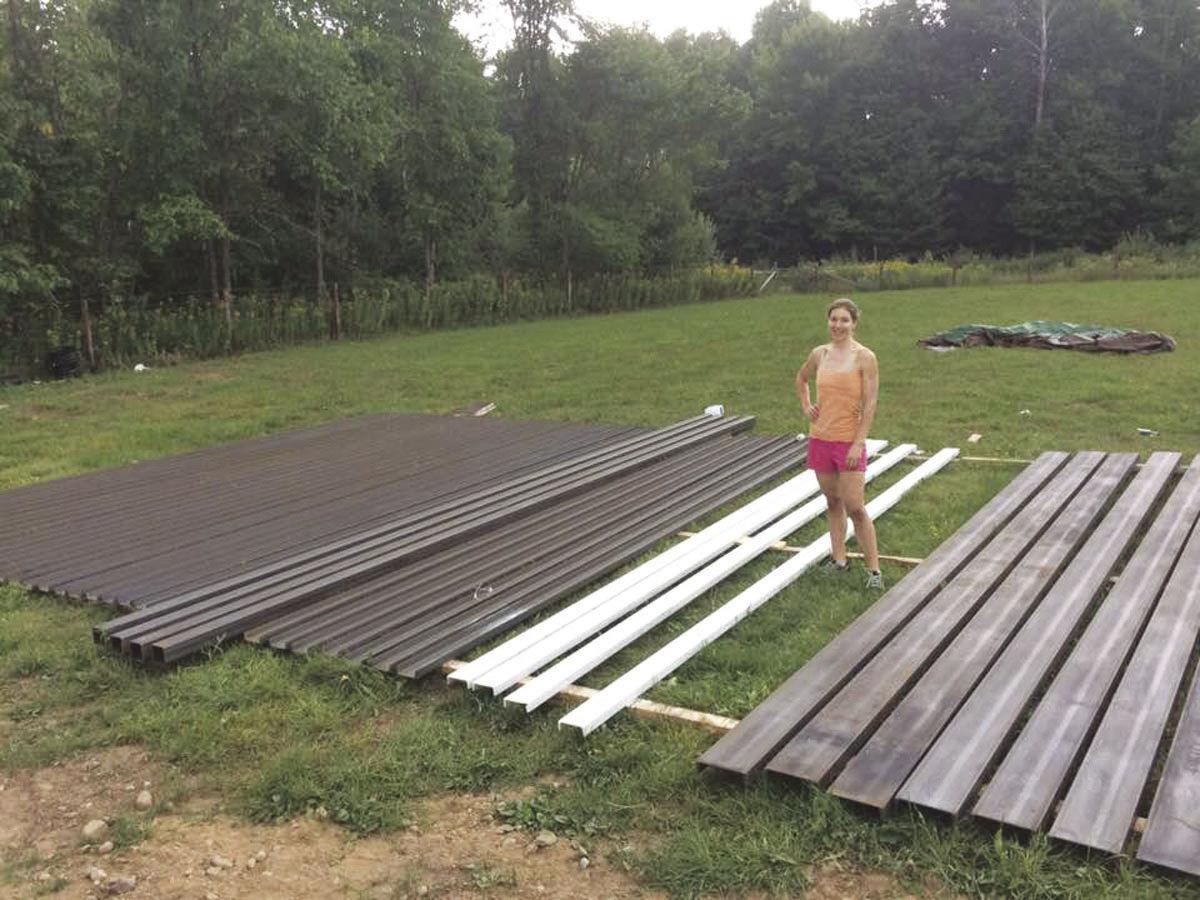 Linda Magnuson stands among the metal that she and Eric used to create the frame for the solar array. In assembling the structure, Linda learned to weld. 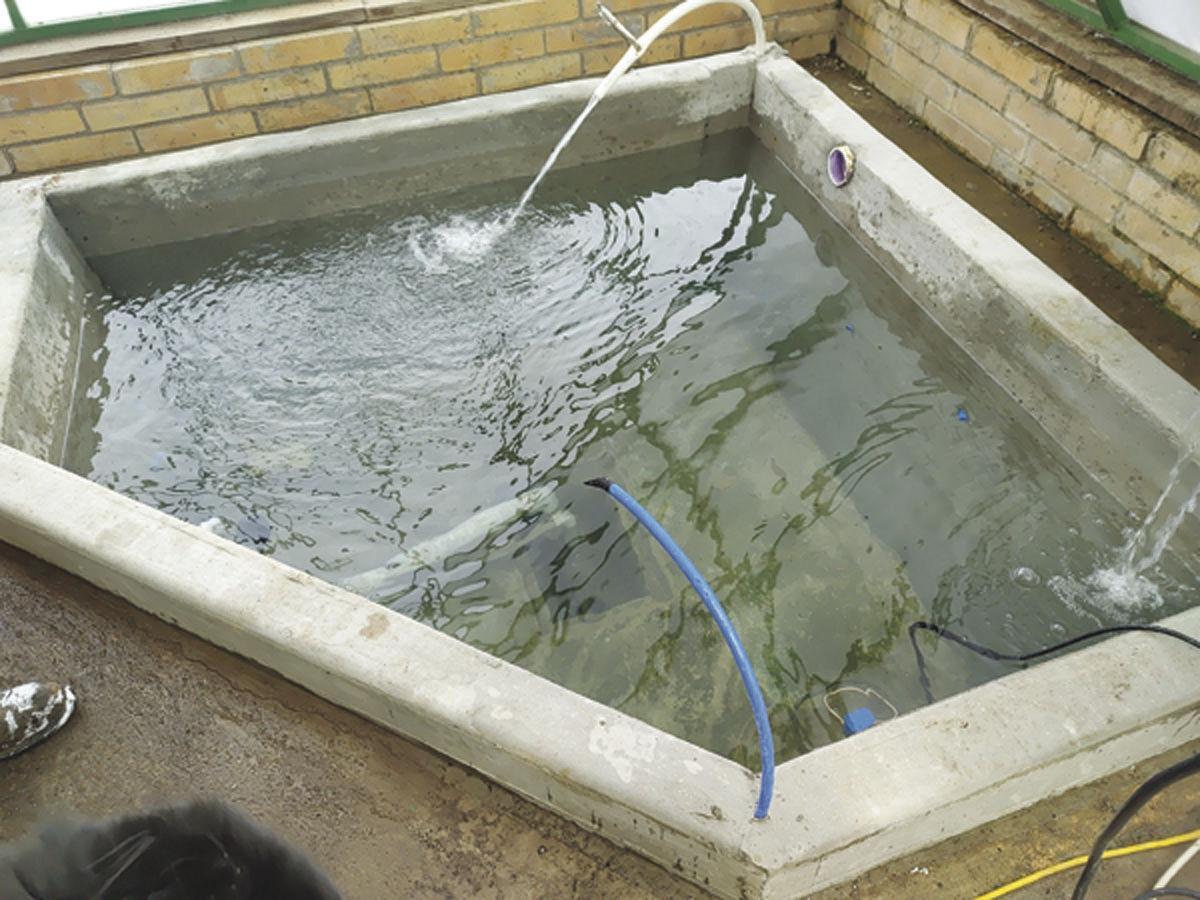 This cement pond, with circulating water, will eventually contain the larger fish that Eric and Linda Magnuson will raise, using the fish waste to add nutrients to plants growing nearby.

Eric and Linda Magnuson created this large solar array that generates enough electricity to power home and a surplus to sell to the power company. The system sits on six large pillars seated five feet in the ground, below the frost line, to keep the system stable. Each of the five solar segments can be tilted to best capture sunlight during different times of the year.

Linda Magnuson stands among the metal that she and Eric used to create the frame for the solar array. In assembling the structure, Linda learned to weld.

This cement pond, with circulating water, will eventually contain the larger fish that Eric and Linda Magnuson will raise, using the fish waste to add nutrients to plants growing nearby.

Do it yourself projects are very popular these days, but one couple living just outside the Village of Winter in northern Wisconsin is in another league when it comes to major home projects.

Eric and Linda Magnuson live three-quarters of a mile east of the village off Canestrop Drive. Their home is the one with the solar panels facing south. Nearby is what looks like a greenhouse, which it is, but it is much more — namely, a site for raising fish and using the fish waste to grow plants, a system of agriculture known as aquaponics.

The solar array, which consists of five sections with 20 panels per section for a total of 100 panels, was started in 2017 and completed in December 2018. The aquaponics shed was started as a greenhouse and then later given a larger mission.

The Magnusons designed both projects and did most of the work themselves with the help of friends and family. Eric said the motivation comes from the couple’s desire to be self-sufficient, including providing for their own electrical power and food.

Linda said both projects were demanding, but they learned a lot. She learned to weld, for example, and the projects were bonding experiences with their children — Adrian and Alaric.

Eric has worked in electrical construction all his life. He has a two-year degree in electro-mechanical technology and is working on a bachelor’s degree in electrical engineering from the University of North Dakota, He is currently the master electrician for Columbia Forest Products in Mellen.

“I kind of wanted to do this for a long time,” he said of the solar project.

Eric’s grandfather, Aubrey, was the former president of North Central Power, a company that invested in local hydroelectric dams. Eric was always impressed that the area was ahead of the nation in renewable energy.

The couple said they decided to go forward in 2017 because of available government grants and tax benefits for solar energy. At the time a trade war with China was heating up and in response Chinese was flooding the U.S. market with low-cost, high efficiency solar panels.

“I didn’t know what I was going into,” Linda said.

Eric designed the entire system and the couple bought all the parts, including the metal to create the frames to hold the panels.

“The frame is all my design,” Eric said. “These were welded here. We did all the welding, all the fabricating.”

One unique feature of the solar array is the foundation — a network of large cement pillars the system sits upon.

“I wanted it to be as strong or stronger than the house as far as handling wind and snow loads,” he said. “It’s actually about twice as strong as my house. So if a tornado came through, the solar would be more likely to survive than the house.”

Eric also wanted the firm foundation because frost in the ground can move structures. Another feature of his design is that each of the five sections can be tilted manually to best capture the angle of the sun, which is high in the summer and lower in winter.

The couple saved nearly $40,000 building the project themselves versus hiring a contractor. The total cost came to $24,000, but with government grants and rebates it was reduced to $13,000.

With the system generating between $4,000 to $4,500 of electricity a year and the home using just $1,500 annually, the payback on the project cost is only three years.

The power they don’t use the couple sells back to the electric utility. However, Eric said they were locked into a good rate back in 2018 that is not available now, and he advised anyone thinking about solar to just consider covering home usage.

The Magnusons say it is quite common for someone to park on the nearby road to admire the solar system, then knock on the door and ask questions.

“A lot of people are interested in doing this themselves,” Eric said, “and they want to know what we did and how you go about this type of project.”

The way he designed the solar array, Eric said, it would work well for a farmer to install in a field and move the panels during the summer so they’re nearly horizontal to provide shade for cattle underneath, then ratchet the panels to 45 degrees in winter when the sun is at a lower angle, to create a windbreak, all the while also providing energy for the farm.

The couple built the greenhouse before the solar array and then decided to invest in the aquaponic project, but work stopped to focus on solar.

“We actually put that on pause because there was so much incentive that year (2017) to do the solar,” Linda said.

Eric said Linda likes garden products and he likes fish so they combined their likes to use fish to create waste — fish poop — that turns to nitrogen and feeds green plants. The idea is both the plants and fish will grow and both will be consumed.

“So aquaponics works on an idea that it’s basically its own ecosystem,” Eric said. “The only input we bring in is the food. So the fish, they create waste, and the waste turns into ammonia that small microorganisms and bacteria break down; they convert it into nitrogen. And then, of course, the plants use nitrogen. So that’s the cycle, the nitrogen cycle.”

The Magnusons have created a intricate system of pushing water around from fish tanks to filters to plants and back again. One key element is a filter system of lava rocks that collects the fish waste and allows it to break down in the rocks. As it turns to nitrogen it is released back into the water.

Once the system is fully functional and established, they’ll introduce the fish that they want to raise permanently. Eric is considering bluegills because they can stand a large range of temperature variation, from warm to cold.

The couple plan to start raising crops this spring but also looking to continue growing through next winter. The greenhouse receives in-floor heating from a outside wood boiler and extra lights will be provided during the dark winter months to give the plants enough light to continue growing.

“I think it’d be super cool if we can, in northern Wisconsin, grow spinach and lettuce and stuff in our backyard in our greenhouse during the winter,” Linda said.