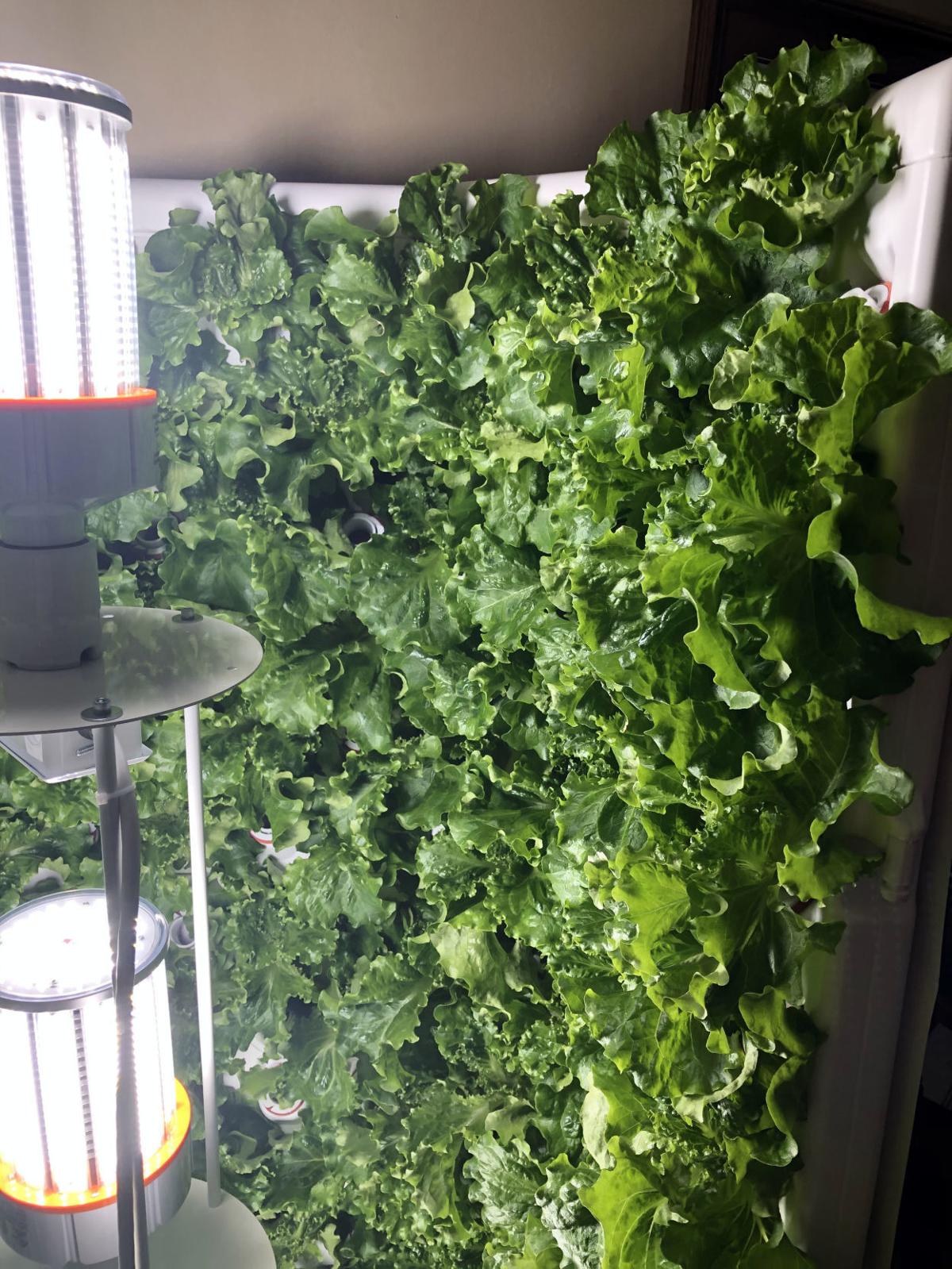 Lettuce in the hydroponic gardening tower at the Rice Lake senior center was ready to be harvested last week. 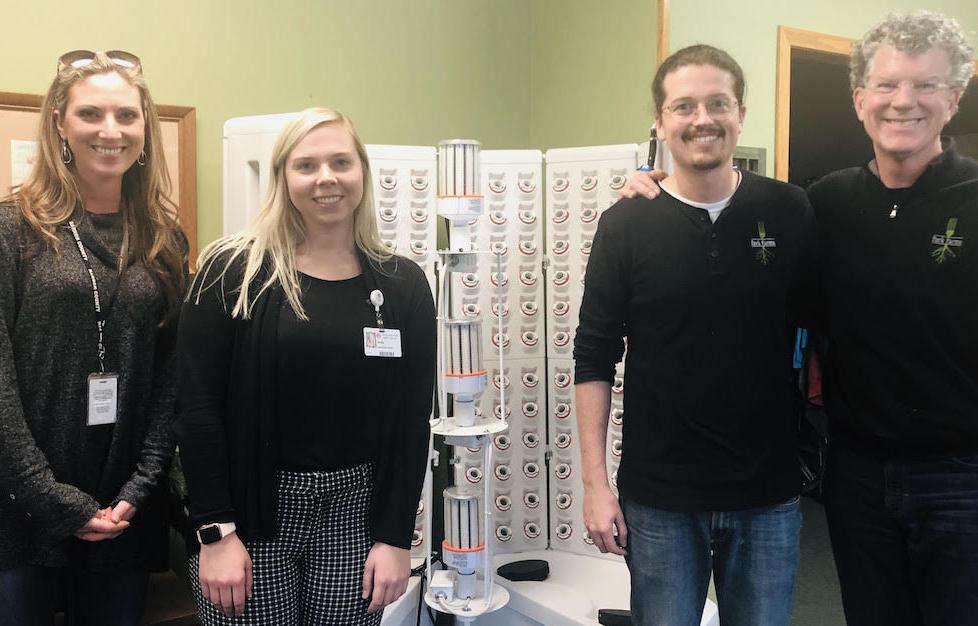 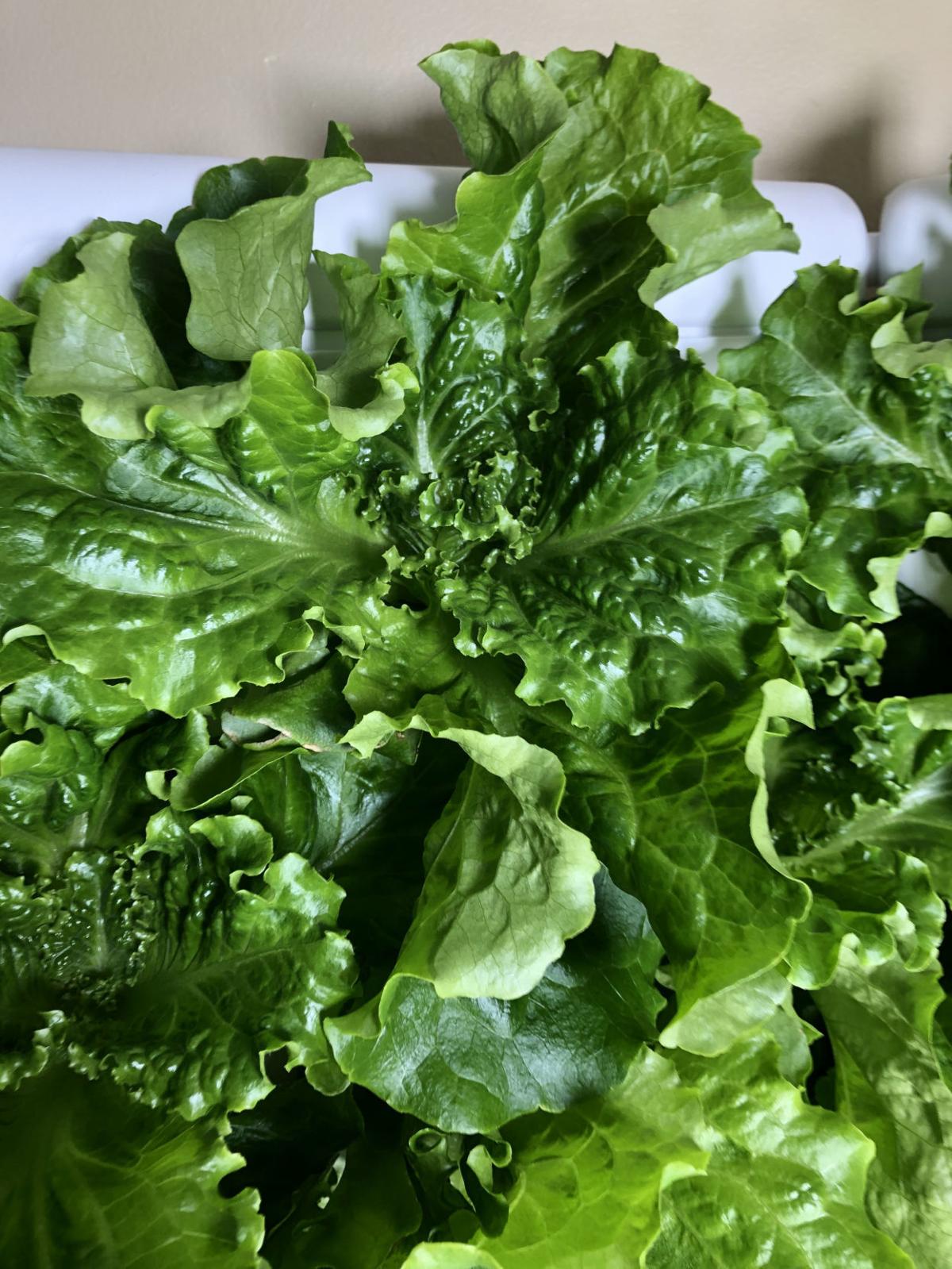 Lettuce grown in the hydroponic gardening tower will go directly to diners served by the Barron County Nutrition Program.

Lettuce in the hydroponic gardening tower at the Rice Lake senior center was ready to be harvested last week.

Lettuce grown in the hydroponic gardening tower will go directly to diners served by the Barron County Nutrition Program.

RICE LAKE — A compact hydroponic garden tower is set to be a big bonus to the Barron County Nutrition Program.

The tower, which takes up a grand total of 9 square feet, is housed at the Rice Lake senior center and was donated to the program by the Marshfield Clinic Health System Center for Community Health Advancement.

The nutrition program was notified it was eligible to receive one of these towers in the fall, said Darby Smith, nutrition and transportation manager for Aging and Disability Resource Center of Barron, Rusk and Washburn counties. The system arrived in December, and less than a month after receiving it, the first harvest was set to begin last week.

In total 17 total hydroponic garden towers were purchased by the Center for Community Health Advancement. Other locations with the towers include school districts and Marshfield Clinic Health System locations, among other community-based organizations, like the Indianhead Community Action Agency.

When the tower is full, it can produce up to 20 pounds of leafy greens every three to four weeks, Smith said.

“It produces a lot,” said Laura Zelenak, health educator for the Center for Community Health Advancement and the lead on the hydroponic towers project.

The plants are grown hydroponically, that is without soil and in a nutrient-rich, water-based system. A continuous pump filters the water, and the water and nutrients are recirculated through the system.

An LED light stands in the center of the system, which uses minimal electricity, Smith said.

The tower was produced by Fork Farms, which is headquartered in Appleton.

“Our mission is to ‘unleash the power of fresh food,’” Fork Farms President Alex Tyink said. The donation to the Barron County program “demonstrates a deep commitment by the clinic to Barron County, health behavior and preventative medicine,” he added.

Fork Farms also provided training to staff to use the system, Smith said.

The system is “easy to maintain,” Smith said, noting their tasks largely consist of occasionally checking the water, adding nutrients, cleaning the system and harvesting the produce.

Although the hydroponic tower is still new to the program and they plan to stick to growing lettuce for now, at some point in the future they may branch out to include cherry tomatoes and herbs in their production, Smith said.

The greens produced from the system alone can reach over 100 diners, Smith said, a significant portion of the over 300 people the program serves.

As a government-funded program, they appreciate that the tower is a cost efficient way to provide “quality, nutritious food,” Smith said.

Having the system in the Rice Lake senior center, one of the sites that benefits directly from the produce, allows for “less time from harvest to plate,” Smith said. Freshly picked plants are at their nutritional peak and can be served very soon after they’re harvested.

What’s exciting about the tower in Rice Lake is that it’s a direct line from growing to serving, Zelenak said.

Tyink said that the system will provide farmers’ market quality food to seniors “for years to come.”

Another benefit from the Rice Lake system, according to Smith, is that, as it relates to food safety, they have complete control over the growing process, which can be especially helpful in safely serving vulnerable groups, including seniors.

Overall, it gives the program the “biggest bang for our buck,” Smith said.

Healthy eating is one of the key ways to lower risk of chronic disease, she added.

The hydroponic towers project also aims to bring awareness and exposure to healthy eating at the locations that received them, Zelenak said, noting that those more involved in the production are more likely to try what comes out of it, regardless of the diner’s age.

While the system contributes produce, cost savings and a learning experience for diners, Smith said, the program does continue to buy from and support local farms, such as Slippery Hill Farm in Barron, which grows hydroponically as well.

The Barron County Nutrition Program serves sites throughout the county. The greens from the hydroponic garden tower are largely designated for the salad bars at the Rice Lake and Cumberland sites, Smith said, with any excess provided throughout the system as a whole.

Factors that went into determining who received the hydroponic towers included the amount of food insecurity, limited access to healthy foods and community partners in the areas served by the health system, Zelenak said.

Rusk County, which is served by eight of the 17 locations that received towers, was particularly prioritized, Zelenak said.

According to 2019 County Health Rankings, 14% of the population in Rusk County have limited access to healthy food and 12% are food insecure.

In 2018, Security Health Plan of Wisconsin and Marshfield Clinic also awarded a healthy communities grant to the Lincoln County Health Department for hydroponic gardens to be placed in the schools.