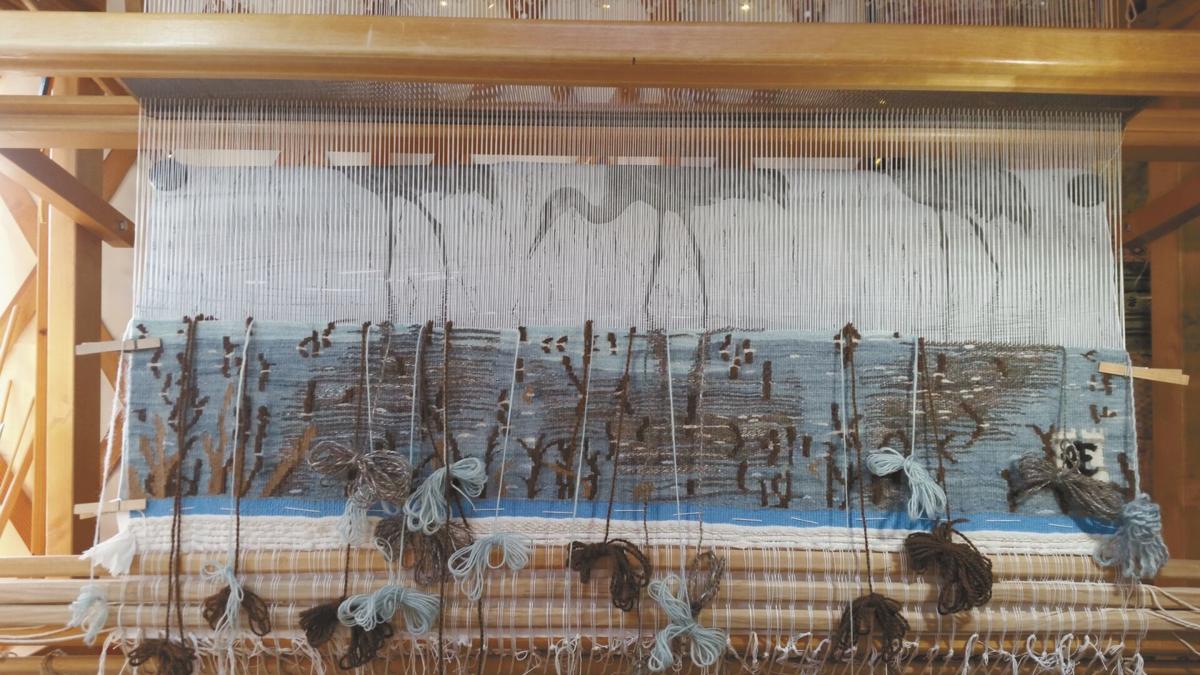 “Zen Cranes” tapestry in progress on the loom. The design is held up behind the warp threads. 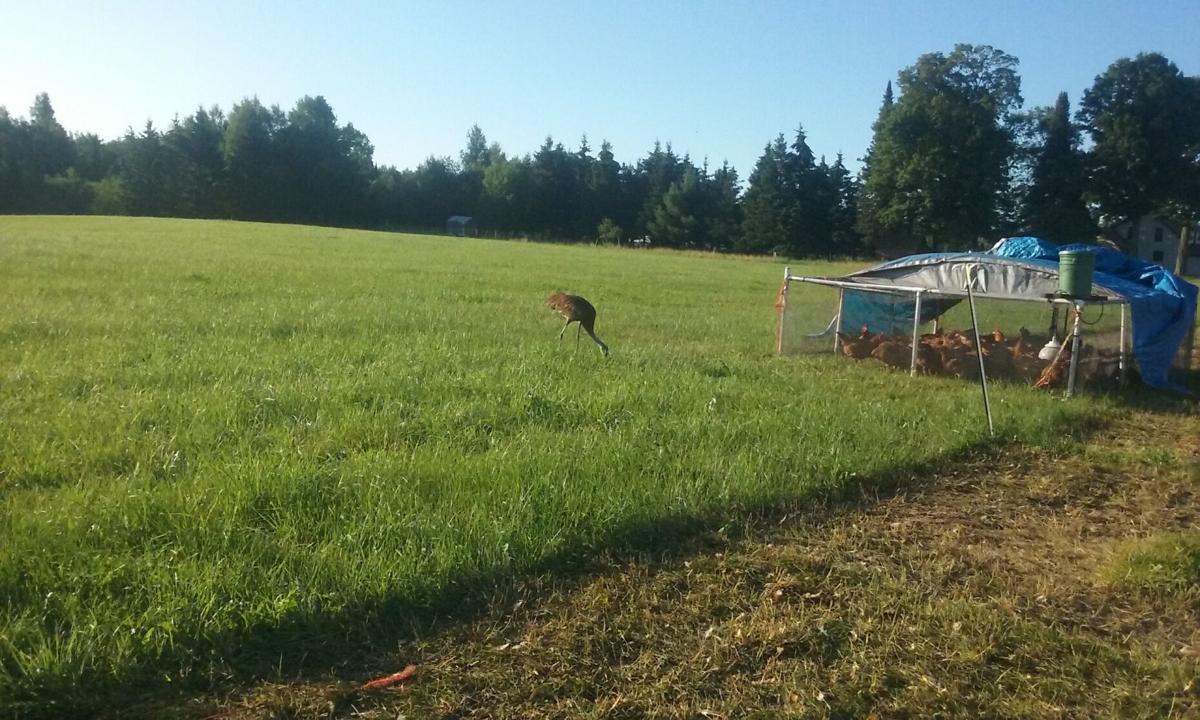 Tristan the sandhill crane looking for spilled food by the chicken tractors.

“Zen Cranes” tapestry in progress on the loom. The design is held up behind the warp threads.

Tristan the sandhill crane looking for spilled food by the chicken tractors.

It began in late spring, when the turkeys were still stationed by the old sugar maple trees in the barnyard. It was morning chore time and I was dutifully feeding, watering and letting the birds out for the day. Movement in my peripheral vision caught my eye, and I looked up to see two adult sandhill cranes approaching from across the pasture to the north.

It is common to see cranes on the farm since they first decided to settle our fields in the early 2000s. But, usually when they see you, they are walking away. Not in this case. I wondered, could this be the pair that were my constant chore companions last summer? The boldest came closer, eyed me with my classic sunhat and utility golf cart, then pecked the ground ceremonially before raising his head to stare at me again. Seeing that I held still, he pecked the ground again, then looked back. It must be Tristan and his lady!

I walked back to the golf cart, grabbed a handful of chicken feed and brought it forward as an offering. Tristan stepped back a few paces at my approach, then watched keenly as I let the feed tumble to the grass on his side of the pasture fence. I backed away and the two gleefully came to eat. My crane family had returned, and they recognized me! I felt so happy.

And then they seemed to disappear, as they always do when it’s nesting season. Last year, the pair raised two colts (a bold one and a shy one), so I was looking forward to this year’s reemergence with kids in tow, but as the weeks passed and the couple began returning to chore-time activities without accompaniment, I became worried that something had caused an unsuccessful hatch or rearing. Nature has an unforgiving side, and a flightless chick on the ground is surely an easy target for many predators.

Even chickless, the sandhill crane couple began returning to the north field, watching for my morning rides in the golf cart towards the chicken tractors and laying hen mobile units, loaded with feed and water. They’d follow along with their stilt-like legs, like little kids following the ice cream truck.

Tristan and his lady are remarkably polite (unlike a bossy pair I had two autumns ago, who wanted to fight me for the feed), waiting their turn while I hand-pull the chicken pen tractors onto fresh grass, fill their buckets with fresh water and dole out the feed. Each time, I bring an offering of a handful, which I place off to the side so it doesn’t feel too close to the action for them. They are also welcome to snack on anything that might not have made it from the feed bag to the bucket or that the chickens may have left behind from the day before.

Lately (perhaps because there are no kids), the cranes have been hanging around the tractors most of the day. Perhaps the chickens offer company. Mondays, lately, have been chicken butchering days, where I drive out with a big dog kennel in the back of the cart, load up about 10 chickens at a time, then give them a lift back to the butcher station in the barnyard. Last week, I rode out there to find the cranes still hanging out. At first, I thought the bird-catching festivities would trouble them, and they’d likely fly away. But, instead, they seemed fascinated, standing to watch curiously the proceedings.

That week, we happened to remove the last round of chickens from the one tractor, leaving it empty by mid-afternoon. I had a younger group to move out to pasture, of the same Red Ranger meat chicken breed, which I waited to move until nightfall when they would be sleepy and easier to handle. The process was uneventful, and the chickens were acting like pros when I arrived in the morning for feeding and watering, as if they’d been living outside their whole lives.

But the cranes, on the other hand, were standing stone still, in shock. I imagined the silent monologue between them:

“Wait ... wait a minute. That tractor was empty! I saw them empty it. Didn’t you see that?”

“Yes, I was there. All the chickens were gone.”

They stretched their necks way out, as if wanting to learn more but hesitant to come any closer, as if they’d just witnessed a magic trick. But the normalcy of chores soon dispelled the confusion.

Molting season has arrived, where all the birds shed their old feathers to grow new ones before the autumn migration. After nibbling at the chicken feed, the cranes take time to preen, pulling off the old feathers a few at a time. In the morning, I collect them, as I’m using them in a large tapestry I’m creating based on a photograph by friend and fellow artist Kathy Bishop. I began the process in January and am almost to the crane’s legs! The process is slow and meticulous, each strand worked individually by hand to create the mimicry of water, shadows and reeds.

With their cast-off feathers in hand, I’ll be thinking on Tristan and his lady even after they have flown south for the winter. For now, though, it’s a joy to have their companionship during morning chores. What kinds of wildlife visitors do you enjoy?

See you down on the farm sometime.

Laura Berlage is a co-owner of North Star Homestead Farms, LLC and Farmstead Creamery & Café. She can be reached at 715-462-3453 or northstarhomestead.com.