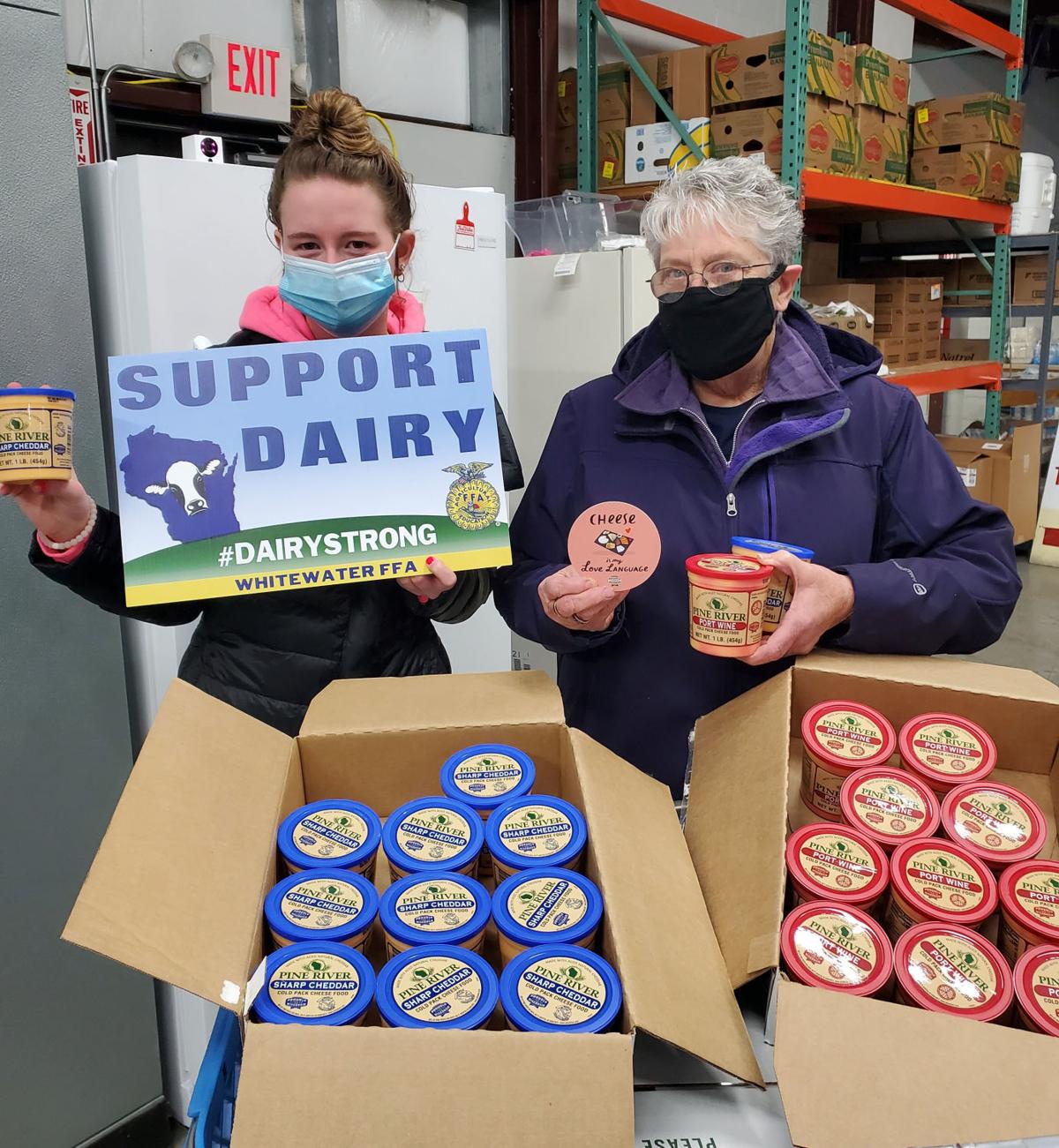 Elizabeth Katzman is pictured with Kay Robers, co-manager of The Community Space in Whitewater, one of the beneficiaries of the dairy product donations generated by Katzman’s “Support Wisconsin Dairy” sign project. 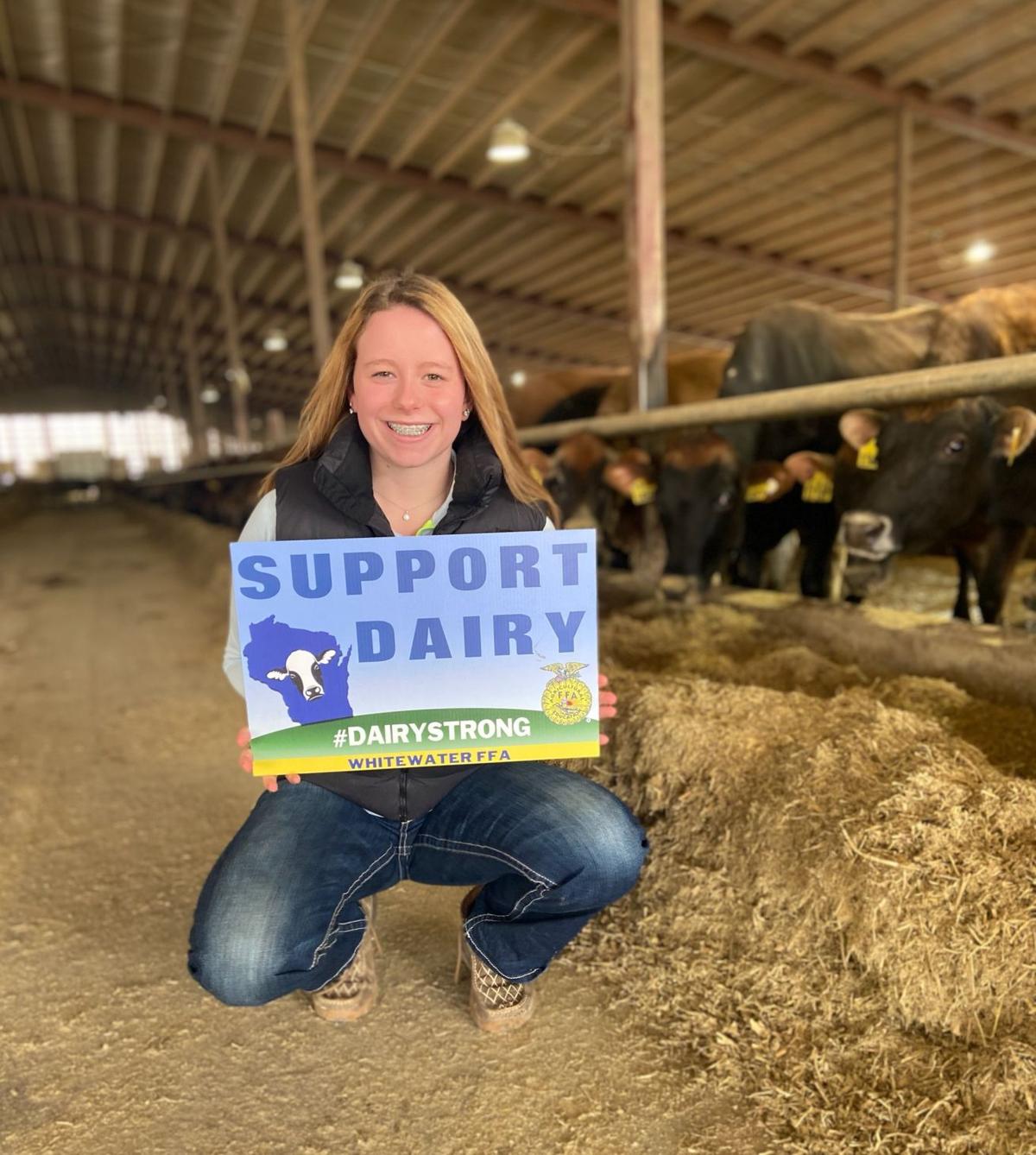 Elizabeth Katzman held one of the signs that were sold to support Wisconsin dairy farmers.

Elizabeth Katzman is pictured with Kay Robers, co-manager of The Community Space in Whitewater, one of the beneficiaries of the dairy product donations generated by Katzman’s “Support Wisconsin Dairy” sign project.

Elizabeth Katzman held one of the signs that were sold to support Wisconsin dairy farmers.

When the COVID-19 pandemic struck last spring, shutting down sports and school activities among other things, Elizabeth Katzman suddenly found herself with not much to do.

“This former busybody had nothing but time on her hands,” said Katzman, current president of Whitewater FFA, “so my parents (Wes and Katy Katzman) put me full time in one of our milking parlors.”

Katzman wound up spending plenty of time during the spring milking cows — “like seven days a week because there wasn’t much else I could do,” she said — on her family’s Whitewater-area farm, where three generations and a team of employees are involved in the day-to-day workings of the operation that milks 3,400 cows and finishes several thousand cattle each year.

With her own knowledge of how much work and passion goes into producing milk, Katzman said she felt helpless when she saw other farmers dumping milk last spring due to shifting demand, knowing that her own family could be put in that situation at any time.

“I couldn’t just sit back and do nothing, so I got to work,” Katzman said.

And so her project of selling “Support Wisconsin Dairy” signs to raise money to buy and donate dairy products began.

Katzman had heard of other FFA chapters trying to help out in a similar manner, but because no one was doing anything in her area at the time, she decided to spearhead an effort in southeastern Wisconsin.

The initial goal was to sell 100 signs to raise a total of $1,000. Katzman reached out to local photographer Jodi Wolfram from TJK Wolf Productions, who had started to sell yard signs celebrating the Class of 2020, working with Wolfram to design and print the first 100 signs.

It didn’t take long for word of Katzman’s project to get out.

“Thanks to the power of social media, those first 100 signs sold out in less than 30 minutes,” Katzman said. “I don’t know how many emails my mom sent Jodi with the subject — More Signs!”

More signs were printed, and over the first 10 days of the campaign, Katzman and her parents traveled southern Wisconsin, from Lake Geneva to Poynette to New Glarus and everywhere in between, Katzman said, delivering almost 500 signs in that timespan.

By the time Katzman brought the campaign, which ran over the course of a month between April and May, to a close, she had sold almost 1,000 signs and raised $10,000, ten times her initial expectations.

Katzman selected the two food pantries in her community — The Community Space and the Whitewater Community Food Pantry — to be the beneficiaries of the project.

But both pantries were scrambling to stay open and meet the community’s needs, so in order to avoid overwhelming them, Katzman said she decided to wait until July to start her donations, marking National Ice Cream Month with a donation of 250 quarts of Columbus-based Sassy Cow Creamery ice cream.

The donations have continued on a regular basis since then.

In August, it was 250 bags of cheese curds from Hill Valley Dairy in Lake Geneva.

In October, the donation was 200 half gallons of chocolate milk, the official drink of Halloween, from Prairie Farms Dairy, a farmer-owned cooperative that includes many farmers from southern Wisconsin.

In November and December, $1,200 in gift certificates from Whitewater’s seven pizza restaurants, both local and chains, was donated.

Katzman’s latest donation came this month, when she donated 216 pounds of cold pack cheese spread from Pine River Pre-Pack, Newton, in conjunction with the Dairy Farmers of Wisconsin “For the Love of Cheese” promotion.

The donations aren’t over yet, either. Katzman said she will continue monthly donations until all of the funds have been used, which will likely be in June, when Katzman said she can finish with “an extra-special donation for June Dairy Month.”

Katzman has received much recognition for her campaign, including being honored as a Hometown Hero by Whitewater Unites Lives in July and receiving a citation from the Wisconsin State Assembly last month, in addition to getting extensive media coverage over the course of her project.

“It’s humbling to know what a difference I made in our community and beyond as a 16-year-old farm girl with a plan, which was fueled by passion,” Katzman said.

While Katzman is no longer accepting donations for her project, she encourages people to consider supporting their own local food pantry with dairy products — after making sure that the pantry has adequate refrigeration to accommodate the donation.

Katzman said her family has always tried to support both The Community Space and the Whitewater Community Food Pantry and has built a good relationship with them. After the campaign is over, they still plan to continue to do their part to help, she said.

Katzman, whose FFA advisor is Paul Majors, has also been very involved in her FFA chapter.

Though the sign campaign was an independent project, the Whitewater FFA Chapter covered the cost of the first 200 signs before the Walworth County Dairy Promotion Committee and other local businesses offered to cover the cost of the remaining signs, so that all proceeds could be used to purchase dairy products, Katzman said.

In addition to her current term as chapter president, Katzman has also served as vice president and secretary. Katzman has also undertaken a beef project Supervised Agricultural Experience during the 2018-19, 2019-20 and 2020-21 years and earned other awards, including Outstanding Junior and Top Fruit Seller in 2019-20, Star Chapter FFA Award in 2018-19 and Star Greenhand Award in 2017-18.

Katzman is currently enrolled full-time at Gateway Technical College in a program that allows her to earn dual high school and college credits and plans to attend Northeast Technical College in Green Bay starting in June to study small business entrepreneurship. Katzman, who is enrolled in one class — work study — at Whitewater High School, said she could’ve graduated earlier but “didn’t want to walk away from my commitment to my teammates or leadership positions in student organizations.”

Katzman said she most enjoys being involved in FFA activities that let her “roll up my sleeves and get to work,” including Stuff the Bus for the Whitewater Community Food Pantry, the Whitewater FFA Alumni Toy Tractor Show, the Whitewater FFA Plant Sale, the annual spring dairy farm tour and the Jefferson County Dairy Breakfast.

Katzman said she’s also enjoyed having the opportunity to attend the National Convention in her freshman, sophomore and junior years but that no other experiences top those she’s had showing steers at the county and state level.

Katzman said that because Whitewater High School just returned to offering in-person learning this semester, the chapter wasn’t able to do much earlier this school year. They moved their fruit, cheese and meat sale online, and it worked so well that the chapter might continue to do that in the future, she said.

The chapter recently made valentines for Fairhaven Senior Services, a local retirement and assisted living facility, and chapter alumni are planning a drive-thru pork dinner this spring that the chapter looks forward to helping with, Katzman said.

“While it’s not the year I envisioned as president, we’re making the best of it of and doing what we can,” Katzman said.

Katzman offered a word of advice for others looking to make the most of their time in FFA: “FFA offers countless opportunities for leadership and learning real world world skills. It’s up to you to take advantage of those opportunities and grow.

“Through my involvement, I’ve learned time management, leadership, teamwork, communication and organization, among many other skills, that I will carry with my throughout life.”

National FFA Week kicked off Feb. 20 and continues through Feb. 27.

Find more content celebrating National FFA Week in Section B of this issue of The Country Today.