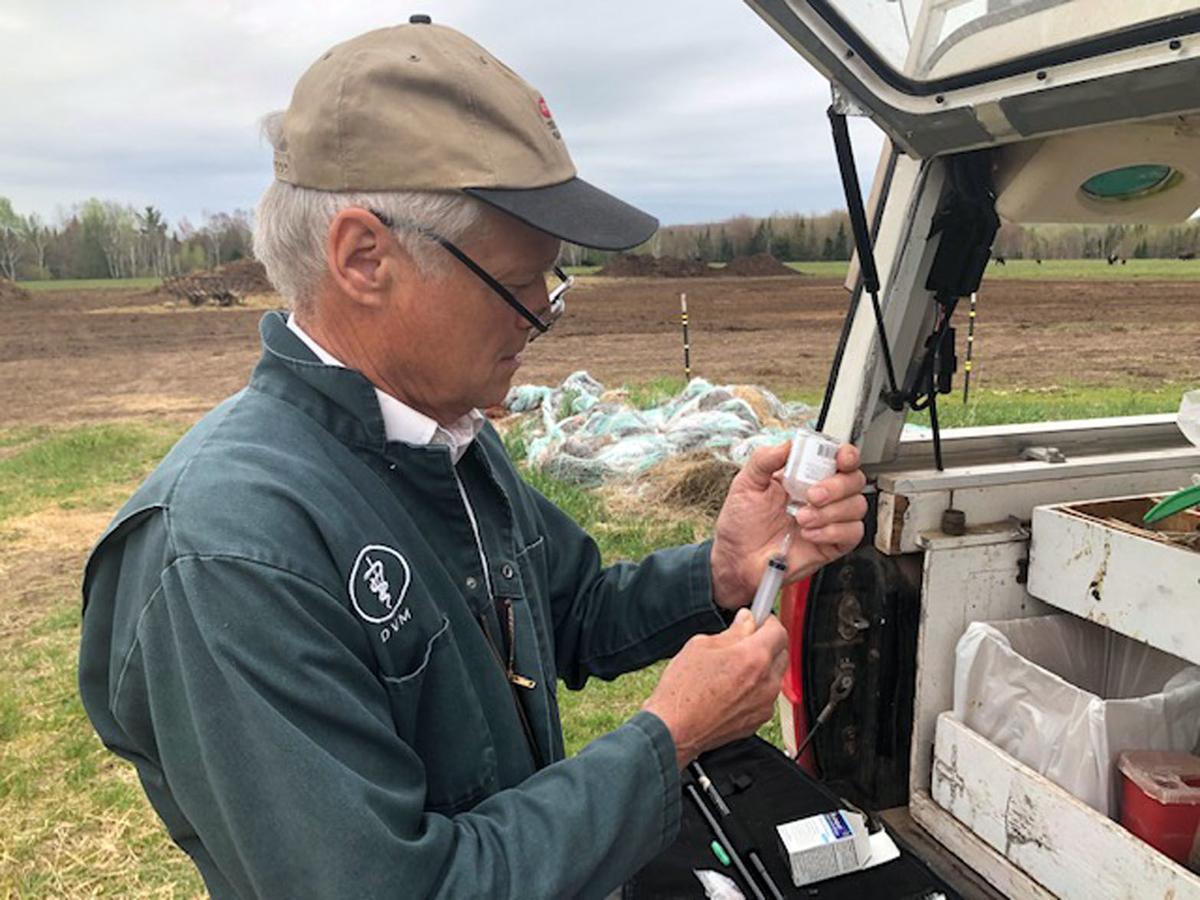 Steve Meyer, a large-animal veterinarian with Ashland’s Willow Animal Hospital, loaded a syringe with sedative before going toe-to-toe with a recalcitrant steer. 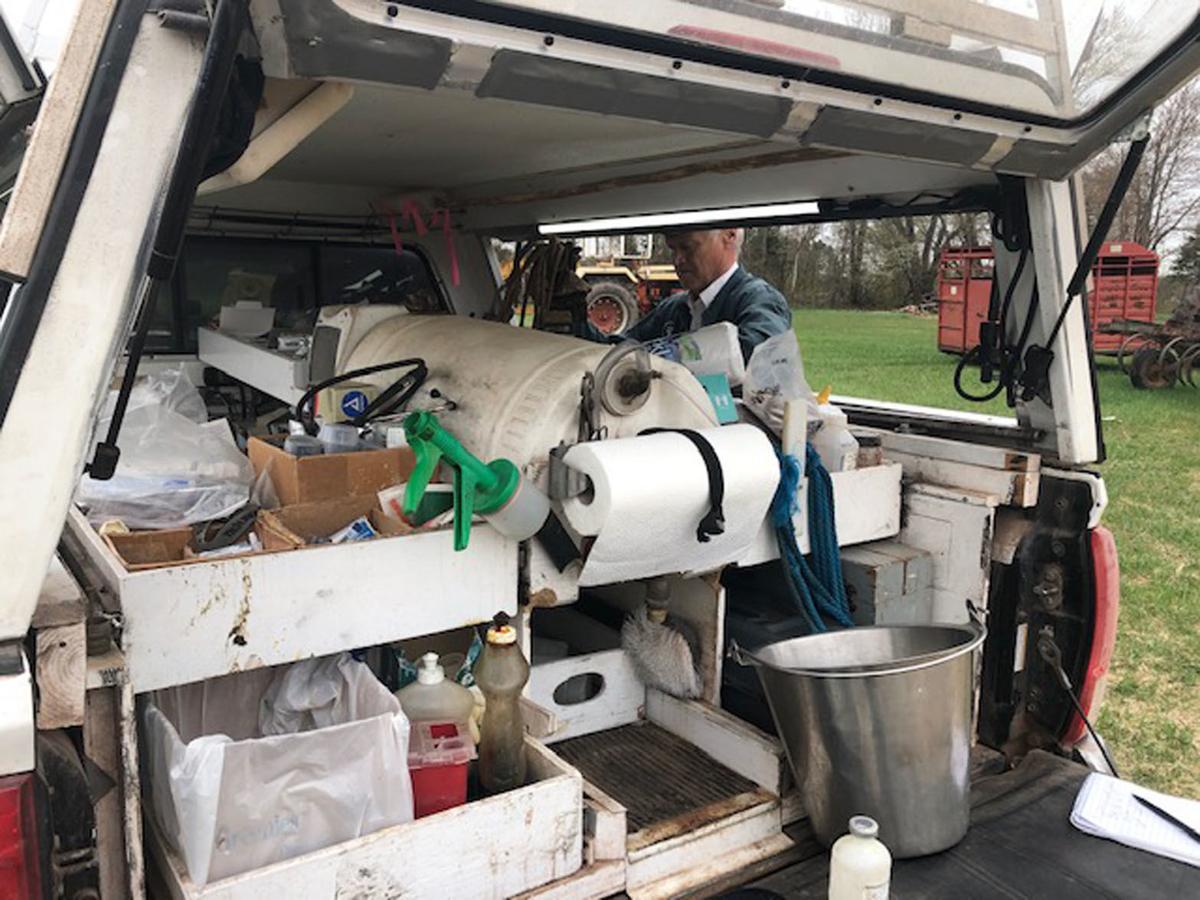 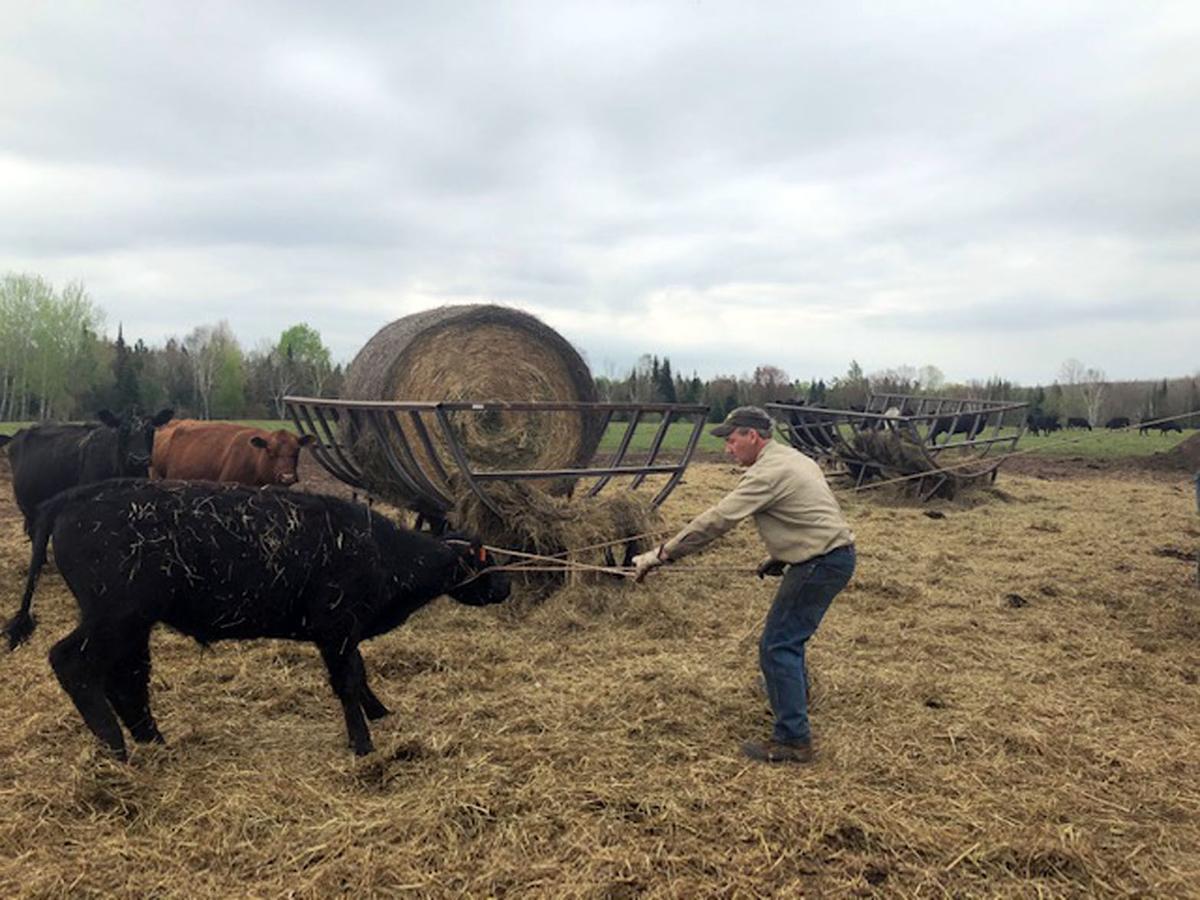 Even sedated, the steer resisted every effort by farmer Jeff Susienka to get it loaded into a trailer. 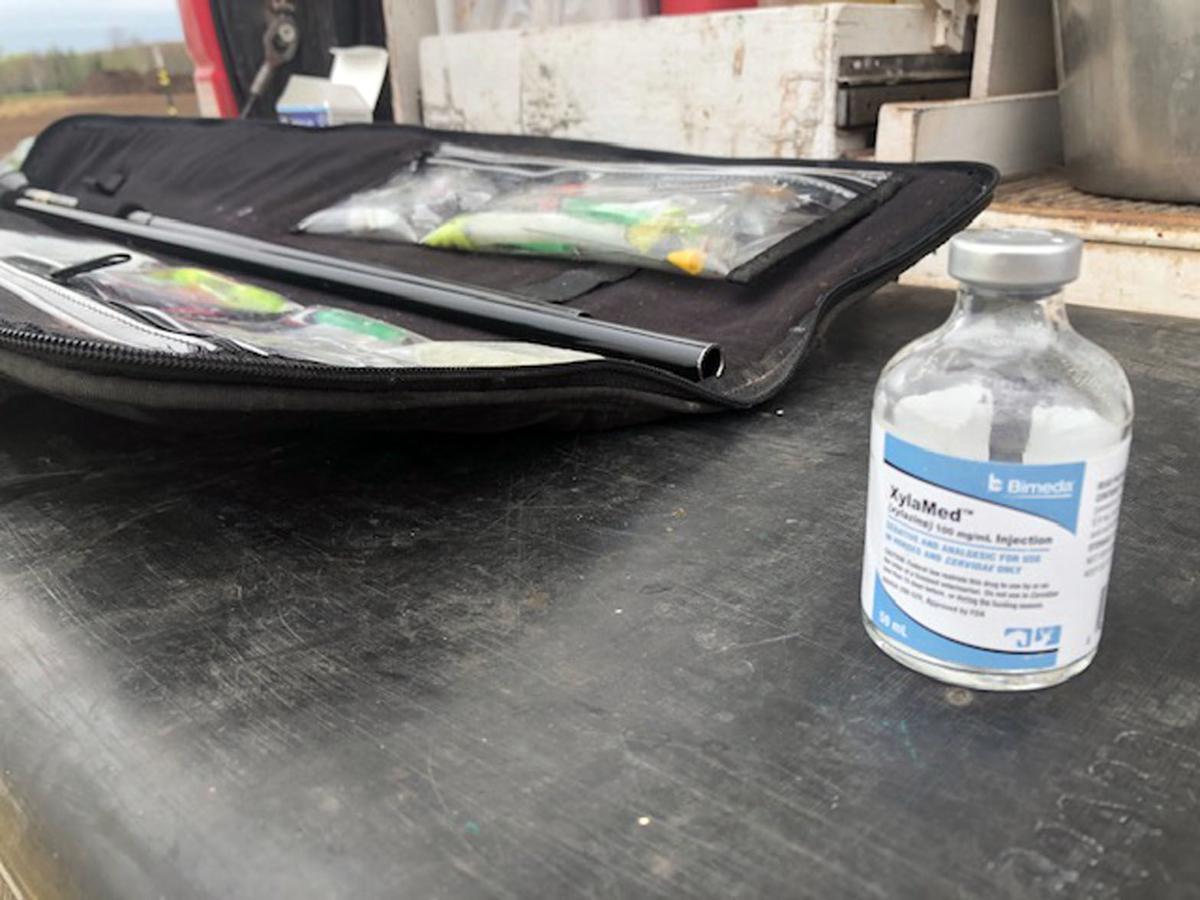 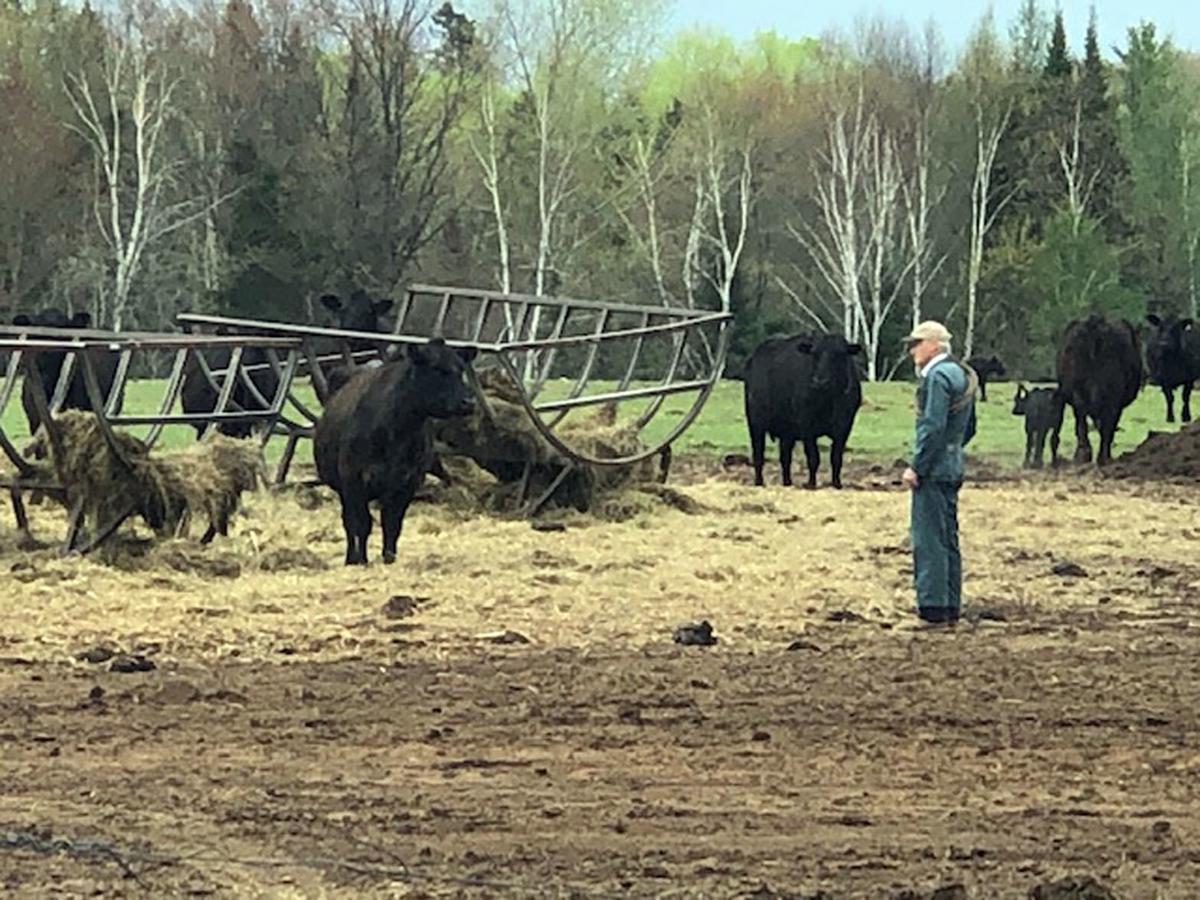 It took Meyer a half hour of quietly walking among the herd to get within blowgun range of his quarry.

Steve Meyer, a large-animal veterinarian with Ashland’s Willow Animal Hospital, loaded a syringe with sedative before going toe-to-toe with a recalcitrant steer.

Even sedated, the steer resisted every effort by farmer Jeff Susienka to get it loaded into a trailer.

It took Meyer a half hour of quietly walking among the herd to get within blowgun range of his quarry.

At just a year old and about 700 pounds, the steer was just a shadow of what he one day would become — a hulking 2,000 pounds of hamburger on the hoof.

But Steve Meyer weighs in at less than 150 pounds, even after downing several burgers. In terms of horsepower, Meyer wasn’t even in the same class.

Bayfield County beef farmer Jeff Susienka had called on Meyer because the Black Angus steer was in the wrong place — in a pasture with all Susienka’s cows and their newborn calves.

“He’s like a troubled teenager out there,” Susienka said. “He doesn’t belong there at all. He’s still trying to nurse on his mom. We can’t have that.”

Moving troubled teens like the steer is just one of the things Meyer, a veterinarian at Ashland’s Willow Animal Hospital, is called on to do in his job as a farm vet.

He cares for large animals of all stripes — sheep, goats, hogs, beef cattle — but the bulk of his farm work is done on dairy cows and horses: dairy cows because they need pretty much continual care to keep producing milk and new dairy cows, and horses because they always seem to find a way to get in trouble, by eating the wrong thing or getting wrapped up in a fence or what have you.

But on this late-May morning, Meyer — who came to Ashland 32 years ago because there was only one other large-animal vet around — had a steer in his sights. Susienka needed to get it into a trailer and then a pen so it could be separated from its mother and about 50 other cows and calves in the herd.

Problem was, the steer was having none of it. Susienka wasn’t about to chase it all over the pasture with a rope in an ill-fated attempt to catch it, so he turned to Meyer.

His weapon: a blowgun, of all things, loaded with a dart filled with a sedative.

“About 10 yards is a pretty good shot for me,” said Meyer. “Often you can get that close. Some days, you can’t.”

This was one of those days.

Beef cattle aren’t wild animals, nor are they pets. They don’t come when you call them and aren’t terribly fond of people in the first place.

Susienka lured the herd in with a couple of round bales of hay, and Meyer began slowly stalking his prey, quietly walking among the herd as they munched on the dried grass.

The steer wasn’t going to fall for that old trick. Every time Meyer seemed to get in range and raised the blowgun to his lips, the unruly teen would hide behind a cow or dart to the other bale 20 yards away.

But Meyer, who grew up on a farm in southern Minnesota, has learned to be patient with his patients. After a half hour, he was rewarded with a clean shot and a dart in the steer’s shoulder.

Even sedated, though, 700 pounds of angry ribeye in the making is powerful and thoroughly unwilling to go where it doesn’t want to go. It took three grown men — a vet, a farmer and a reporter who served as dead weight at the end of a rope — to get the thrashing beast into a trailer for transport.

It was just such a scenario that led to one of the two serious mishaps Meyer has had as a farm vet. A bull he was wrestling with years ago gave a mighty swing of its head and slammed him into a grain chute, knocking him unconscious.

“I’ve been stepped on, kicked, you name it,” he said. “But I’ve only been knocked out twice, once by that bull and another time by a horse.”

That’s the risk of working with large animals. But it’s vital work in the Bay Area, especially as the number of farms dwindles and farmers work on ever-shrinking margins.

“For us right now, the markets are down probably 30 or 40 cents a pound,” Susienka said. “And they weren’t that good to start with. But this coronavirus has the markets turned upside down. Everything is backed up at the slaughterhouse because restaurants and schools aren’t using meat, and we’ve even got dairy farmers dumping their milk because there’s no buyers.”

Susienka just shakes his head in wonder when asked about how the price of a steak or gallon of milk at the grocery has never been higher. He’s not sure where they money is going, but he knows it’s not into his wallet.

As a farmer himself, Meyer, who has his own small herd of beef west of Ashland, is sympathetic — though also worried about his clients having enough left at the end of the day to afford veterinary care.

“They’re good people and they always want to pay their bills when they can,” Meyer said. “Sometimes you have to work with them because it’s a tough life right now.”

Fortunately, the other half of Willow Animal Hospital is dedicated to pets — dogs and cats and other animals that have names and are part of families.

Meyer has to have two different mindsets for the two different groups of patients. After sedating the steer, he was headed toward High Bridge to euthanize a family’s dog.

“I’m a dog lover,” he said. “I’ve felt the turmoil and pain when you lose a good dog, so I definitely feel for people who have to put a pet down. That’s a significant part of medicine, helping families make end-of-life decisions.”

On the farm, though, emotion is rarely part of the equation.

“It’s all about finances,” Meyer said. “Does it make sense to spend $500 in veterinary time on an animal that’s only worth $700, or does it make more sense to turn it into hamburger?”

Meyer helps farmers make those calculations every day. And then he turns his attention to helping them keep on farming.

“After euthanizing the dog, I am headed down near Mellen to check out a dairy herd. So I’ll be sticking my arm up cows’ butts and palpating them to see if they’re pregnant. And if they’re not, we’ll get ‘em pregnant with AI (artificial insemination.) That’s the life of a farm vet.”