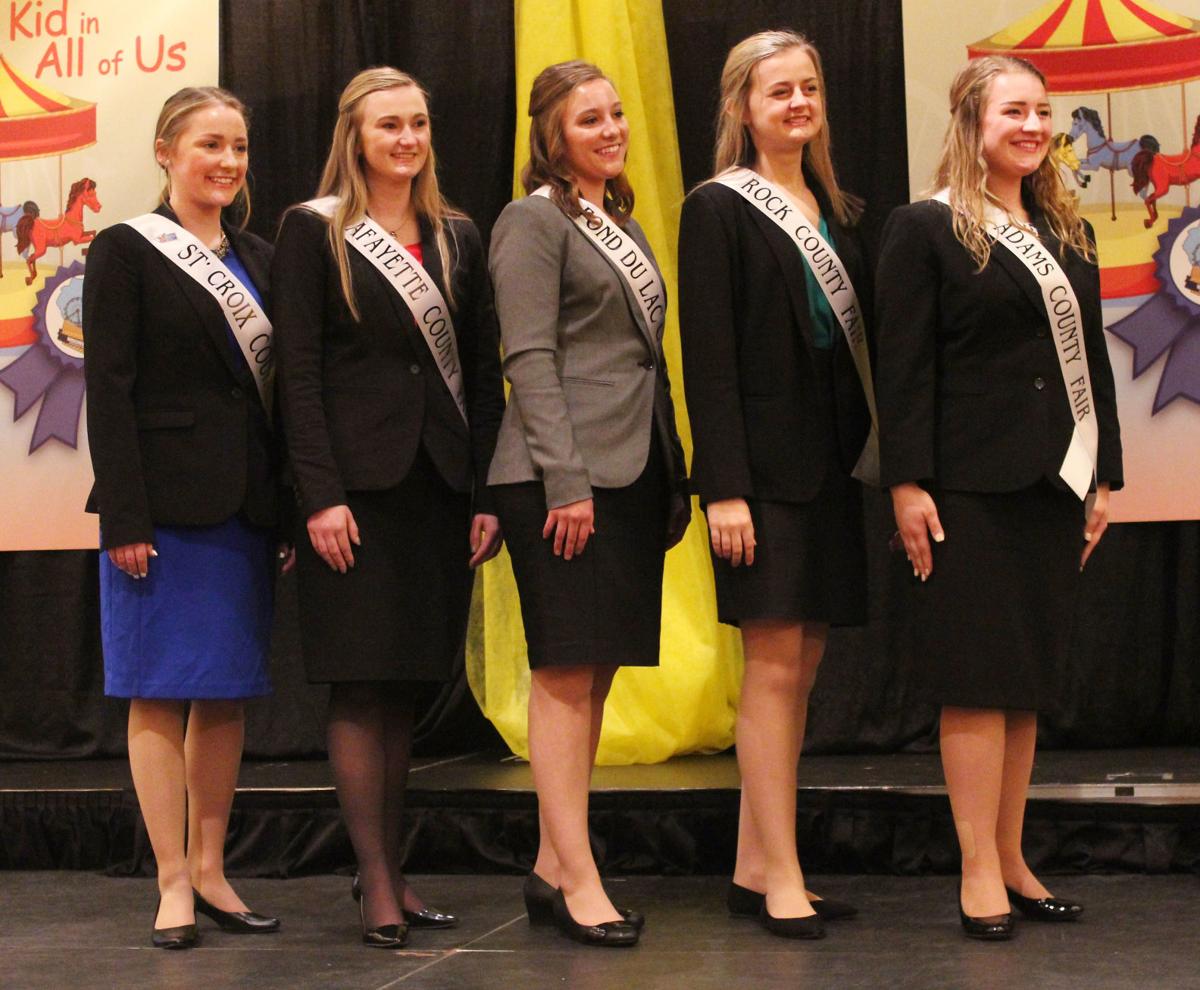 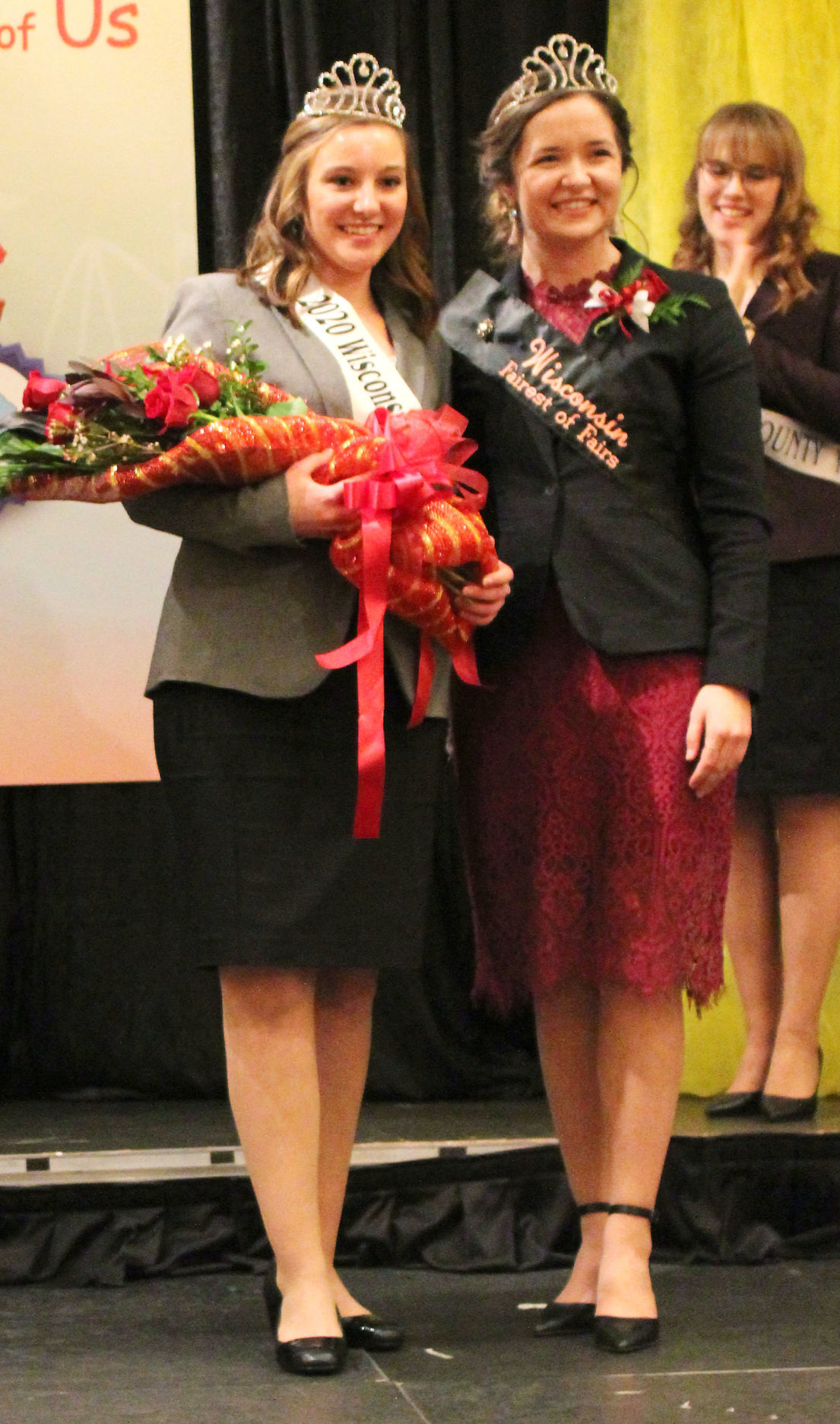 Kayley Vande Berg poses with Meghan Buechel after being announced the winner of the 2020 Wisconsin Fairest of the Fair contest, held the final evening of the Wisconsin Association of Fairs annual convention. 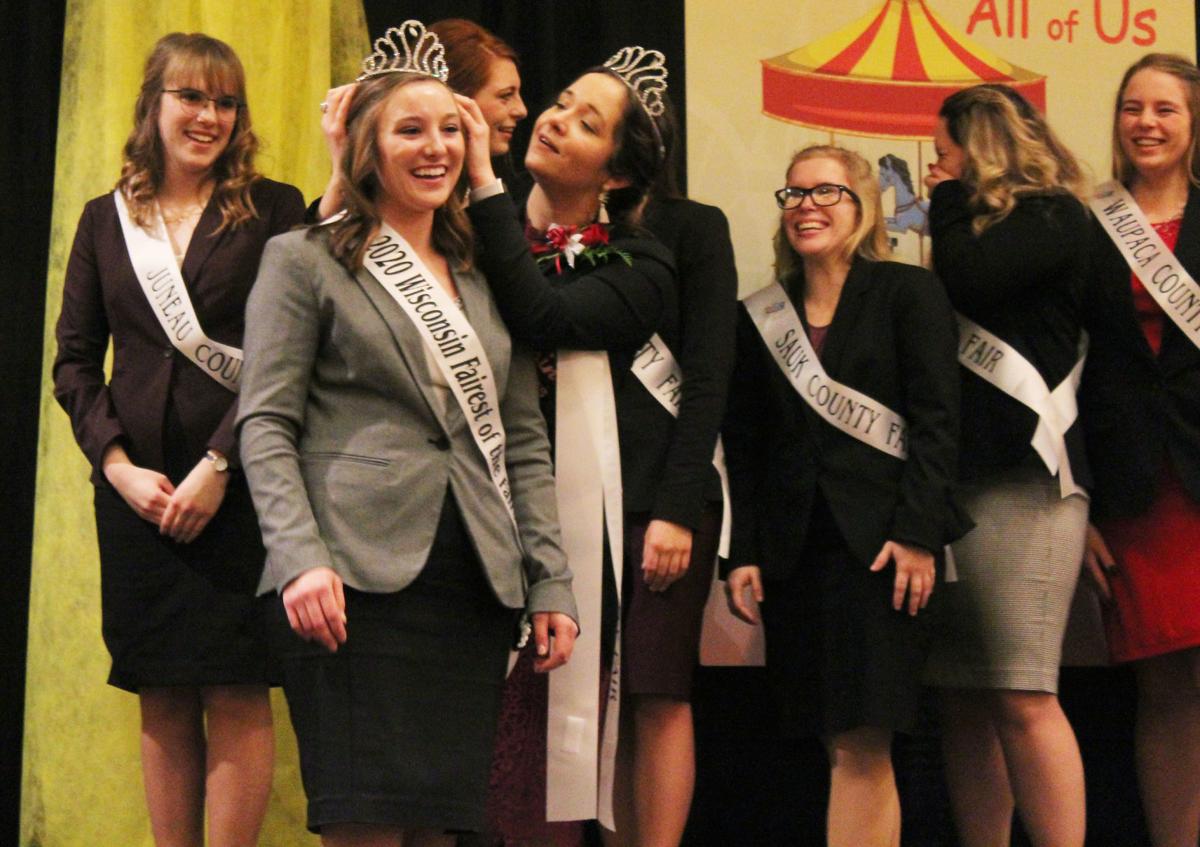 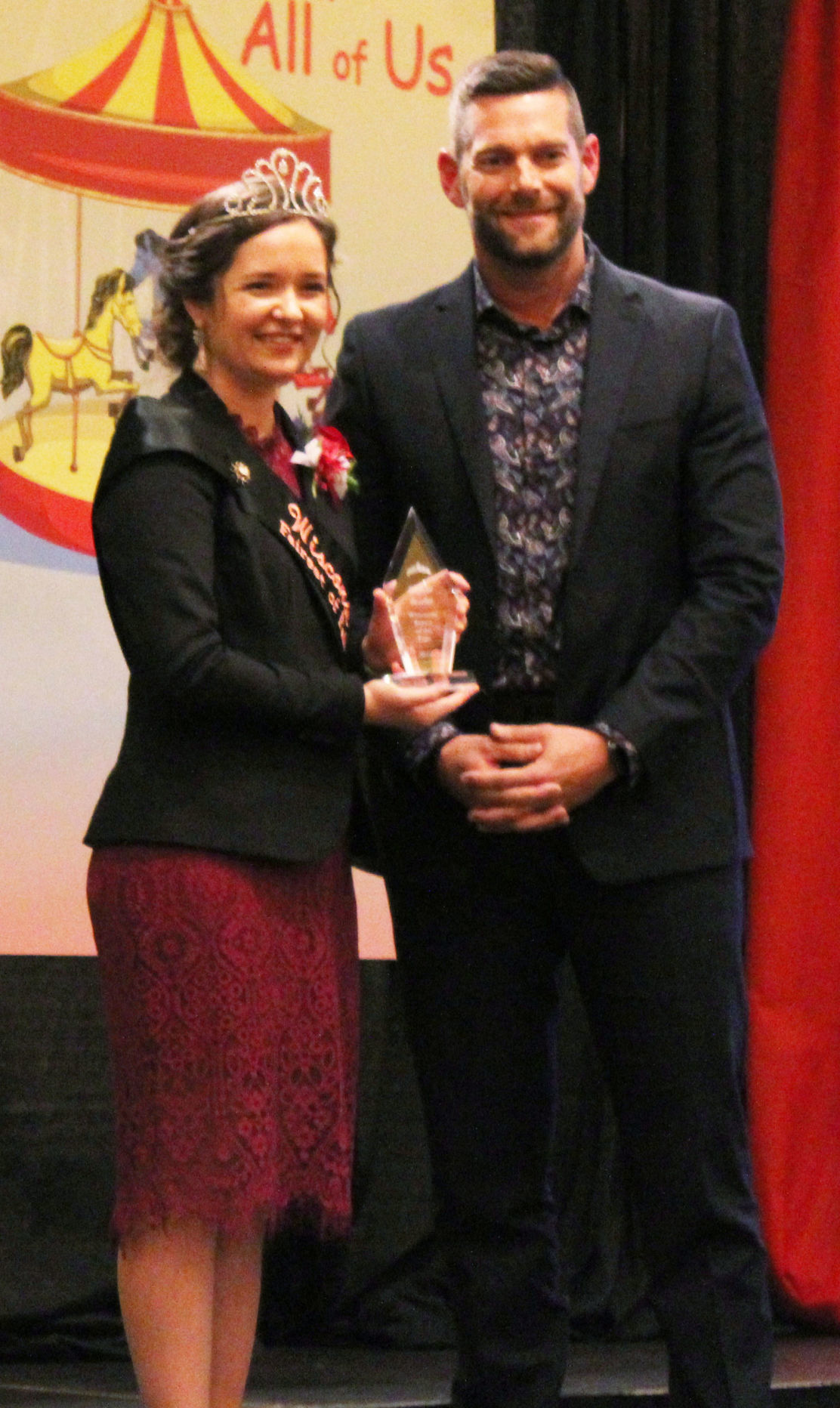 Outgoing Fairest of the Fair Meghan Buechel, Brown County Fair, received an award from Wisconsin Association of Fairs president Matt Immel for her commitment to the role over the past year. 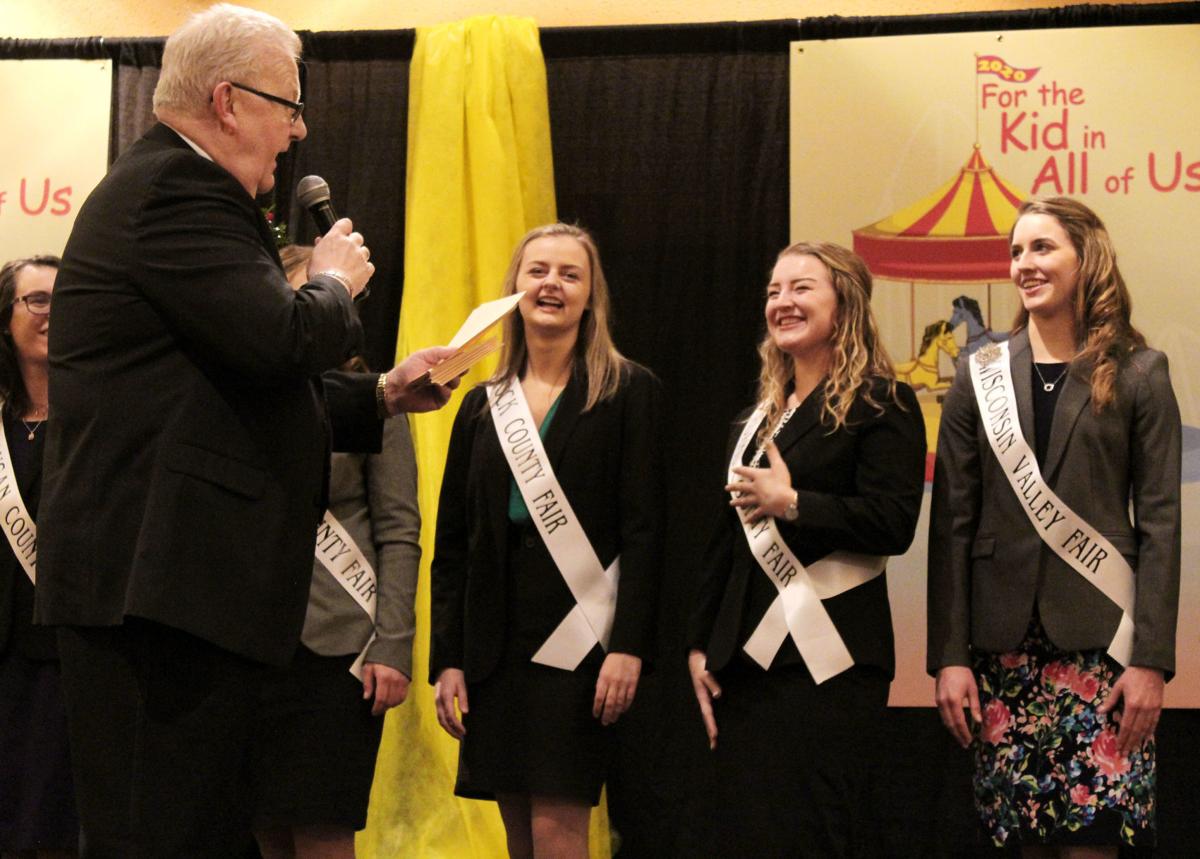 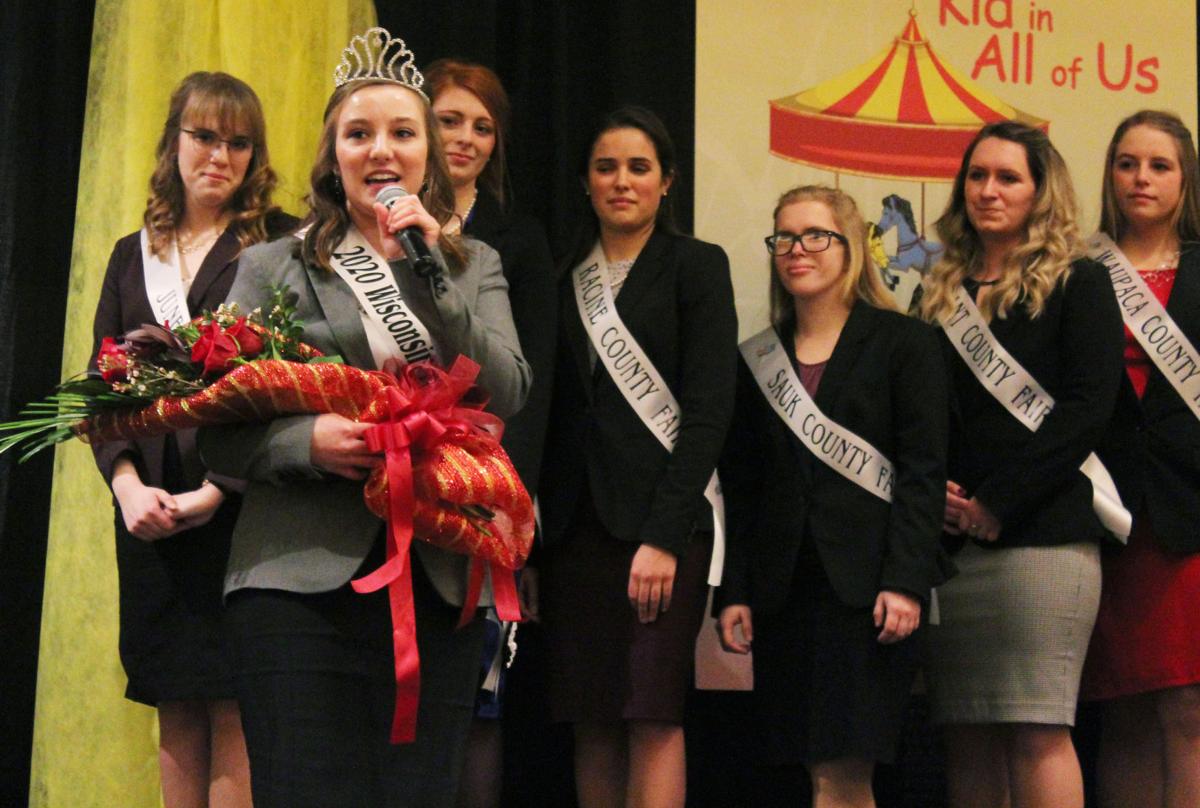 Kayley Vande Berg said it didn't feel real that she had earned the title of 2020 Wisconsin Fairest of the Fairs when speaking to the audience after being crowned.

Kayley Vande Berg poses with Meghan Buechel after being announced the winner of the 2020 Wisconsin Fairest of the Fair contest, held the final evening of the Wisconsin Association of Fairs annual convention.

Outgoing Fairest of the Fair Meghan Buechel, Brown County Fair, received an award from Wisconsin Association of Fairs president Matt Immel for her commitment to the role over the past year.

Kayley Vande Berg said it didn't feel real that she had earned the title of 2020 Wisconsin Fairest of the Fairs when speaking to the audience after being crowned.

WISCONSIN DELLS — After a four-day selection process for the once-in-a-lifetime opportunity to become an ambassador of Wisconsin agriculture and continue the tradition of the county fair, one contestant was crowned 2020 Wisconsin Fairest of the Fairs last Wednesday night.

“This feels like a dream and it’s really incredible to be standing here right now,” Cayley Vande Berg said Jan. 8 after being named the winner of the 2020 contest.

Vande Berg represents the Fond du Lac County Fair. She explained how her days as a youth in 4-H, showing everything from pigs and dairy to foods and home improvement projects have prepared her for the role she will hold for the next year. For 10 years, she was a member and leader of the Eldorado Busy Bees 4-H Club and also held leadership positions in her high school FFA chapter as well.

Vande Berg is a 2017 graduate of Laconia High School and is currently a junior at UW-River Falls. In May 2021, she will graduate with a degree in dairy science and has ambitions to pursue a career in which she can share her passion for cattle and people.

“My dream would be to become Milk Source’s first ever female herd manager,” she said. “I also plan to utilize my bachelor’s degree to help educate the public about agriculture, advocate for the dairy industry and assist dairy farmers with their needs.”

She also has a goal to become fluent in Spanish, as she works and interacts with many Spanish-speaking herd staff at Rosendale Dairy, arguably one of Wisconsin’s largest dairy farms with 9,000 head of cattle.

At Rosendale Dairy, Vande Berg is responsible for diagnosing, administering and recording treatments for fresh and hospital cows, along with assisting with difficult calvings and providing care to 40 newborn calves each day. Shortly after beginning with Rosendale Dairy, she also began working alongside their public relations team, giving tours and educating guests from ages 5 to 98.

Serving as Fond du Lac County’s Fairest of the Fair has provided Vande Berg with many unique and valuable opportunities, she said. From marketing the fair at community events, speaking to a variety of groups and welcoming fairgoers, she has enjoyed being the face of the fair and is looking forward to her new role as 2020 Wisconsin Fairest of the Fairs.

“I did not imagine this outcome but it’s amazing,” she said. “It feels incredible and doesn’t really feel real yet. I think it will take some time to sink in.”

Mikaila Falash, representing the Adams County Fair, was named runner-up in the contest. Falash is an Adams-Friendship High School graduate and is currently working toward degrees in Elementary Education and Teaching English as a Second Language at UW-Stevens Point. She is also enlisted in the Army Reserves as a Human Intelligence Analyst.

Following Falash as second runner-up was Lauren Flynn of the Rock County Fair. Flynn is a 2019 graduate of Janesville Parker High School and is currently studying Finance, Investment and Banking at UW-Madison.

Fairs are for all

When she was crowned last year, outgoing Fairest of the Fairs Meghan Buechel made it a personal goal to promote the fair as a place for all. With a background in microbiology, she began her farewell address by explaining how as a scientist, she developed a hypothesis around this thought that Wisconsin fairs are for all and how over the past year, she executed her experiment with wonderful results.

“It was my observation that Wisconsin fairs have a very genuine way of bring people of all walks of life together,” she said. “And perhaps they bring out the best of us too.”

Buechel shared the stories of several fairgoers and fair supporters she met over her summer, traveling from fair to fair across the state of Wisconsin. She spoke with people of all ages and quickly learned that fairs are a great place for friends and even strangers to become family.

“A year ago, I never would have known how to answer what the best part of the fair is,” she said. “It is every single person within them.”

She encouraged everyone in the audience to take a moment to greet a stranger at the fair this coming summer, challenged them to learn something new and to enjoy every aspect of Wisconsin’s fairs and agriculture.

And above all, “always remember to share that Wisconsin fairs are for all,” she said.