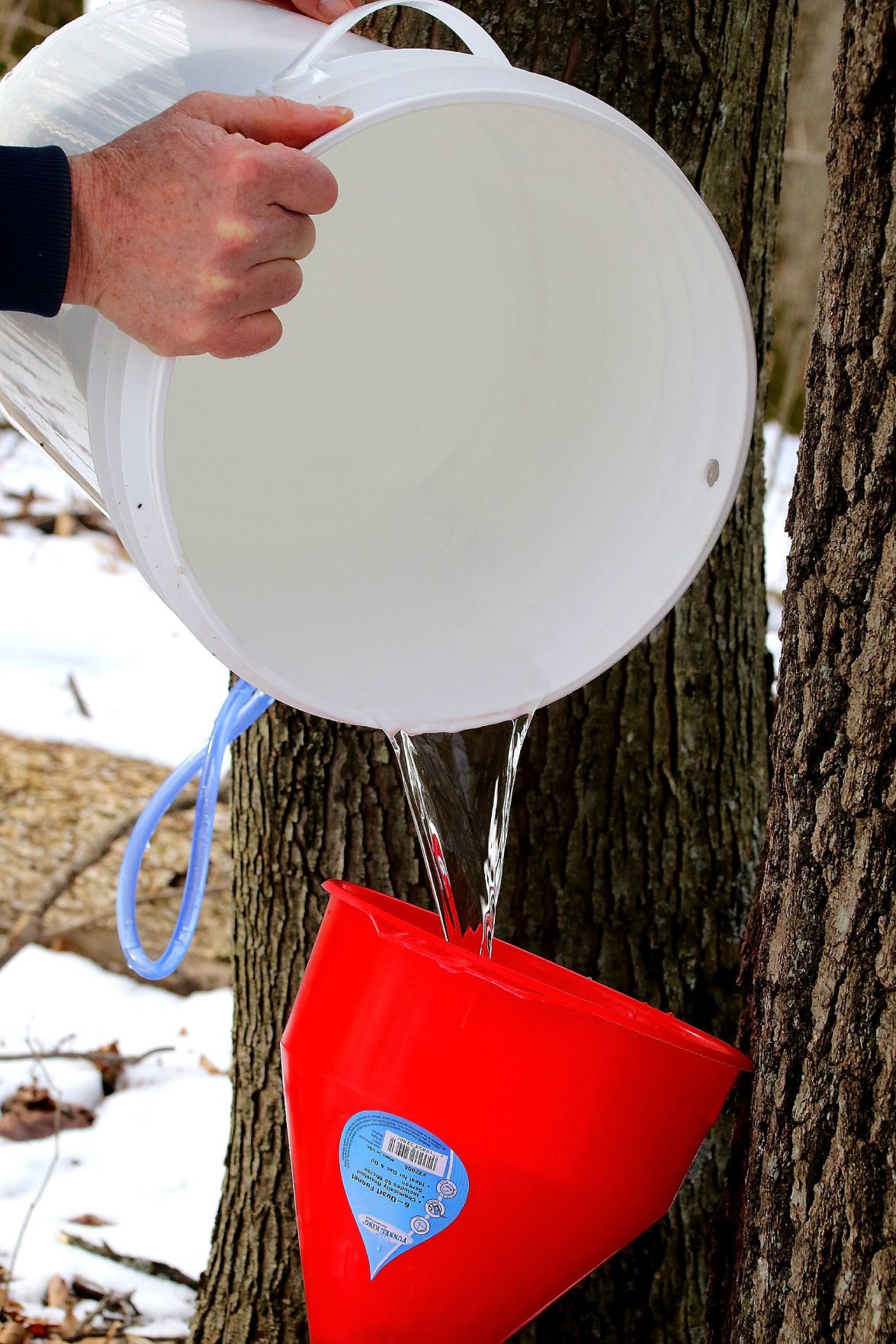 Maple sap is clear coming out of a tree. 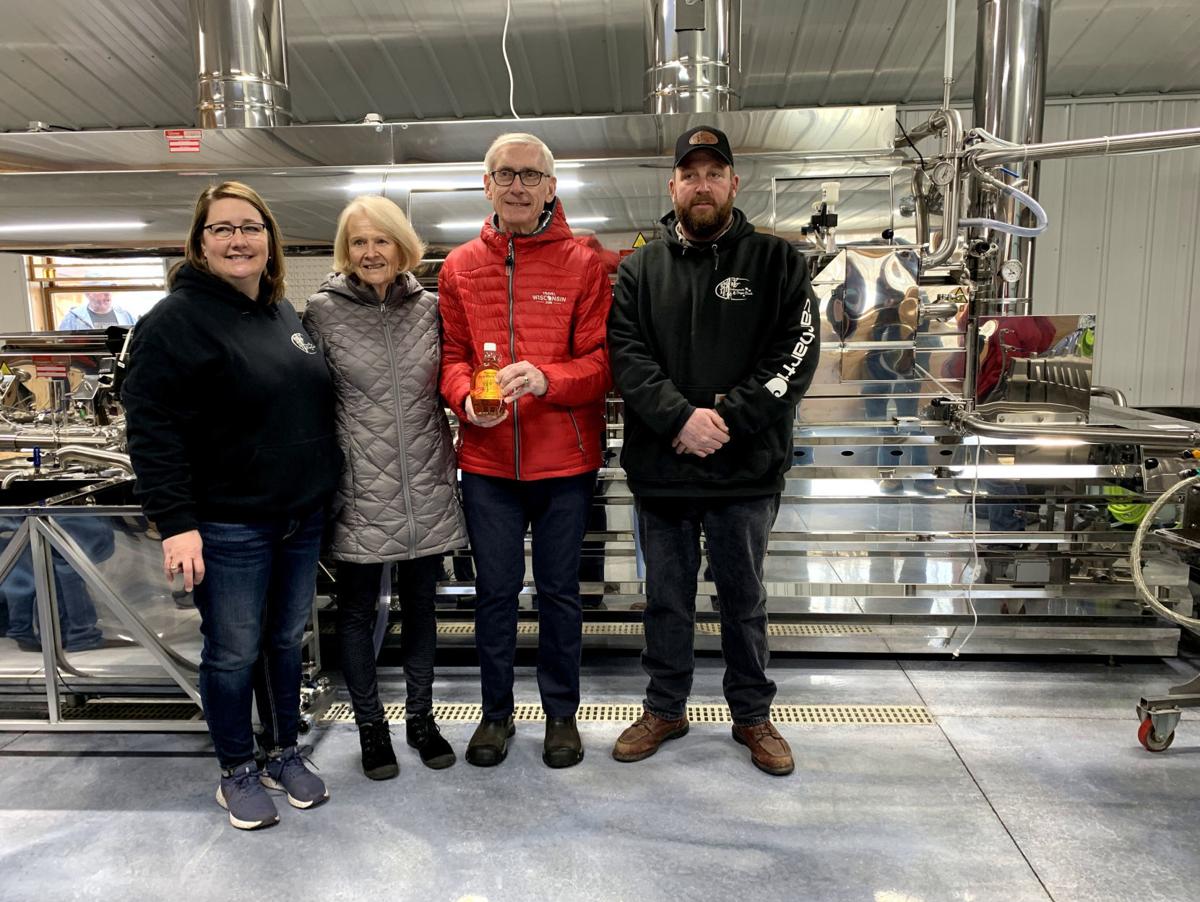 Maple sap is clear coming out of a tree.

Maple trees across the state of Wisconsin have been tapped, sap has started flowing and producers have started outputting gallons upon gallons of sweet syrup as maple season gets underway.

That season kicked off a little earlier than usual for most producers, said Theresa Baroun, executive director of the Wisconsin Maple Syrup Producer’s Association.

Baroun, who has 1,200 taps and buys from other producers to output 200 gallons of syrup a year at her family’s business in De Pere, said that they tapped two weeks earlier and were on their fifth boiling.

A little over a week into March, they had produced about half of the maple syrup they expected to, Baroun said.

At Pozarski Family Farms in Boyd, sap collection began about three weeks earlier than it has the past couple of years, said Jessica Pozarski, who operates the farm with her husband, Blake.

The Pozarskis, who have about 2,000 taps and try to grow a little every year, had their first cooking two Sundays ago and hoped to improve on the 1,000 gallons of syrup they produced last year, despite encountering a few challenges with the woods so far this year.

Maple season was also off to an early start in Dallas, where A&M Pure Maple Syrup, operated by Andy and Marilyn Humphrey, began cooking down sap about two and a half weeks sooner than previous years.

Like most agricultural endeavors, the success and timing of maple season is dependent on the weather.

For maple producers, temperatures that dip below freezing at night and rise into the mid 30s through 40s are ideal to get the sap flowing.

Recent days with highs in the upper 50s have negatively affected how well the sap has flowed for the Humphreys.

However, unlike many agricultural producers who found disappointment and frustration in a particularly wet fall, Baroun said that the wet autumn was good for producers. Less frost also helped, she said.

An earlier start does have the potential to put producers in a time crunch for tapping, Pozarski said, noting that they try to keep an eye on the extended forecast in order to better prepare to get the taps in in time.

Pozarski said that the season usually lasts about four weeks for them, but that number is conditioned on Mother Nature.

Maple Month, which officially runs from March 15 through April 15, features events throughout the state that allow people to visit maple producers and see everything from tapping to cooking — often with some sweet taste testing thrown in.

The month can be a tradition for maple syrup producers and event attendees alike, Baroun said.

Once a producer gets started, making maple syrup can become “a bit of an addiction,” Pozarski said, noting that their operation has grown a lot since they began collecting sap in metal taps and buckets in 2012.

It’s not uncommon for maple syrup production to start out as a hobby and grow into something more.

Andy Humphrey can trace back to tapping a few trees with his dad for a school project when he was five. Years later he went off on his own to produce syrup, bringing his high school sweetheart and now wife along for ride shortly after.

The Humphreys said that they “love having our customers stop by” and being able to “educate them on every aspect of being a sugarmaker.”

That aspect of maple syrup production has grown as local food movements, farmers’ markets and a desire to link a producer to their product have grown.

“People want to know where their food comes from,” Baroun said.

Producers often list maple syrup as a healthier alternative to other sugars. Pozarski noted that they’ve had customers purchase syrup in bulk for use in baking and cooking.

What makes Wisconsin syrup stand out from that which is produced in other maple syrup producing states is the quality of the soil and minerals that feed into the trees, Baroun said.

Pozarski said that each producer’s syrup was a little bit different and that factors such as the location of and terrain surrounding the sugar bush as well as the type of maple tapped and the cooking process could factor into a syrup’s flavor.

Evers also read the proclamation officially declaring Maple Month, and several speeches were given before tours started. About 70 people attended the event, which is open to the public and rotates among six districts, Baroun said.

For a list of open houses from maple syrup producers around the state during Maple Month and beyond, visit wismaple.org.