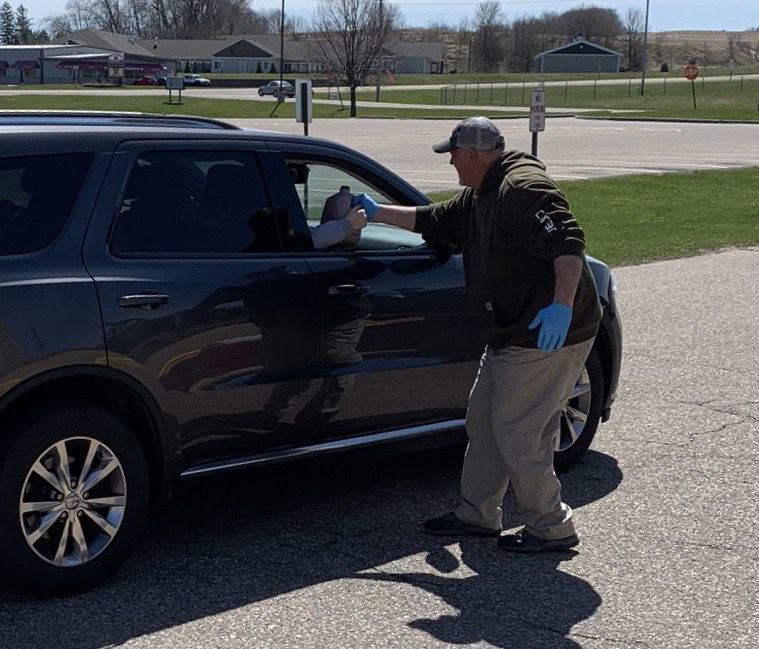 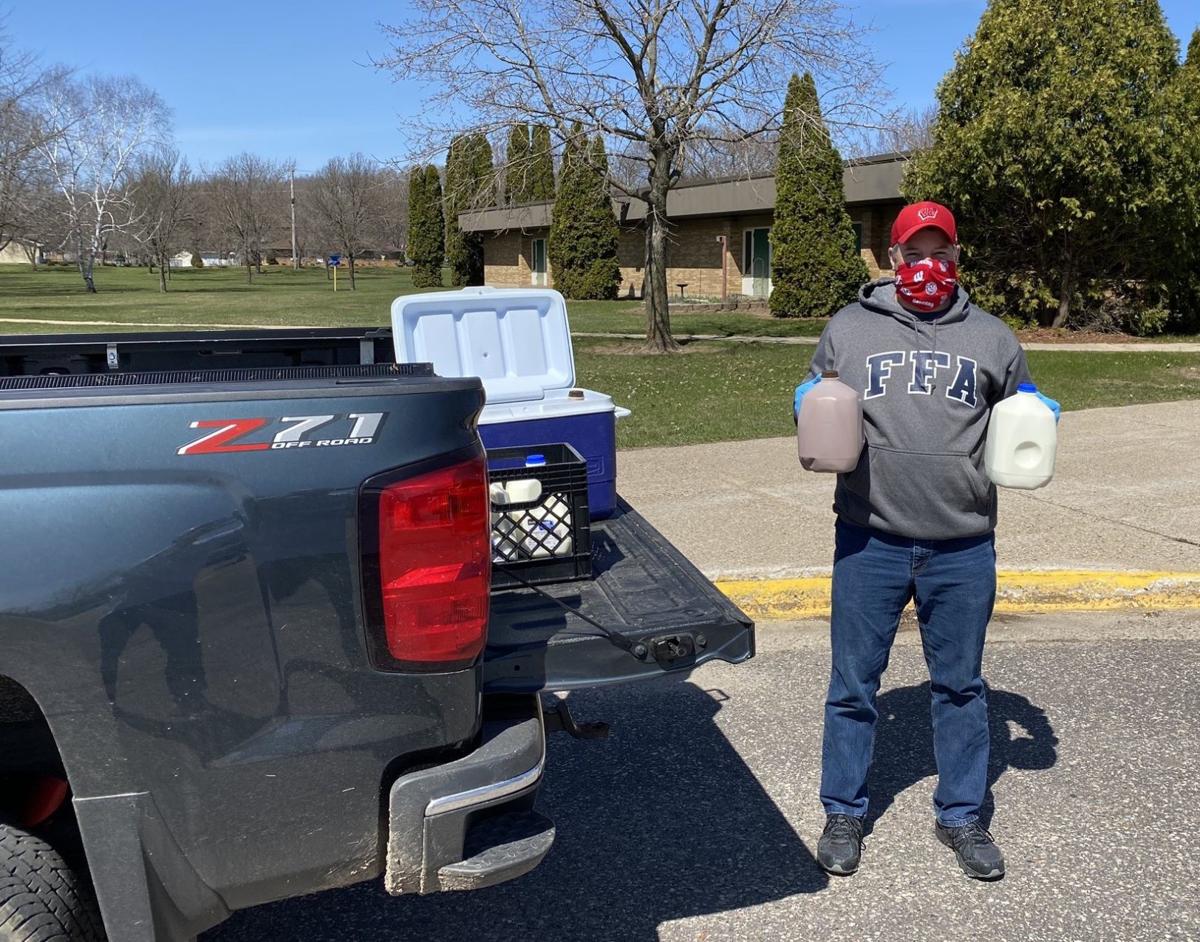 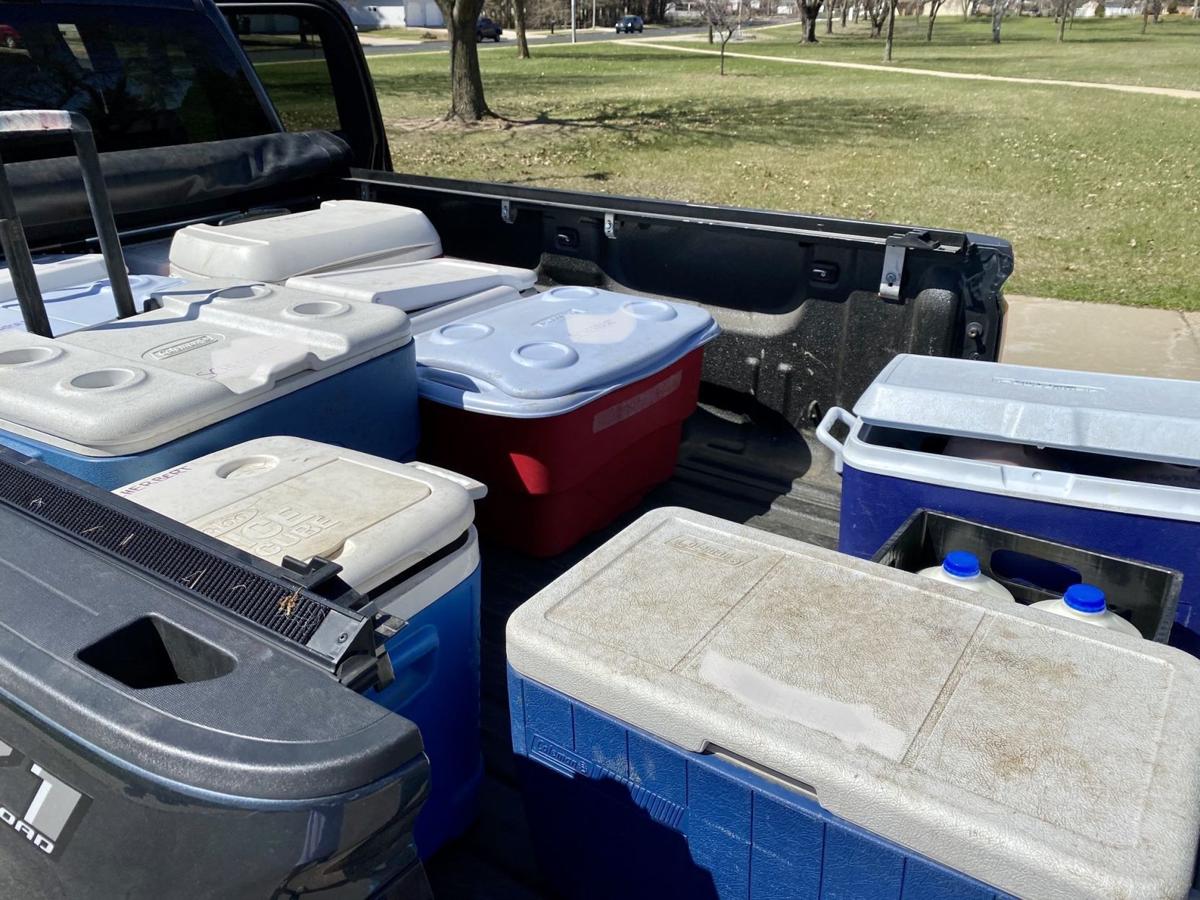 The first day of milk distribution supported by the FFA in Reedsburg was a success on April 24.

The first day of milk distribution supported by the FFA in Reedsburg was a success on April 24.

FFA chapters across the state are stepping up to help their communities and the dairy industry in different ways during the COVID-19 pandemic, and the Reedsburg FFA chapter is proving to be no exception.

Beginning Monday, April 20, Reedsburg Area High School agriculture teachers and FFA advisors Todd Cherney and Nick Casey began handing out gallons of milk once a week at two of the seven locations where the school district has been regularly distributing thousands of meals for its students.

While the student FFA members can’t be allowed to help physically distribute the milk due to COVID-19, they’ve given their full support to the program.

The initiative started when the advisors talked to FFA members and decided to make a commitment to donate $1,000 of their budget to help provide gallons of milk to local families in need.

Cherney and Casey said that the FFA members saw this as an opportunity to give back to those who have been there to support the FFA and that the kids wanted to be involved and help their neighbors.

“A lot of people have helped us out before,” Casey said.

When $400 was spent during the first week’s distribution of 150 gallons, the chapter made the decision to up their donation to $1,200 to ensure they would be able to provide the same amount of milk the following two Mondays, April 27 and May 4.

The program has only grown from there.

A wave of community support and donations has flowed into the initiative since it’s started, which is allowing the number of gallons distributed each week to increase to 200 and the length of the program to be extended at least two to three weeks longer than initially thought.

“The support has been overwhelming in the Reedsburg community,” Cherney said.

The milk is distributed on a first-come, first-served basis at a rate of one gallon per family in a drive-thru format as the families drive by to pick up school-provided meals for students.

The milk distribution program, which has spread by word of mouth and the district’s social media, has certainly taken off.

On April 27, the second day that gallons were distributed, some families showed up 40 minutes before meal distribution was scheduled to begin to wait for their chance to grab a gallon, Cherney said. Once distribution started, they ran out of gallons to hand out in 27 minutes.

“There is a need,” Cherney said.

That need, which more people are starting to realize, he said, is why they’re so happy to be able to expand this program.

“You should see the cars that come through,” Cherney said, noting that he has seen kids’ “eyes light up” at the prospect of receiving a gallon of chocolate milk.

The program isn’t just about getting milk into the hands of those who want and need it, though, Cherney said. In some small way, they hope their efforts are helping dairy farmers locally and statewide who, like many, are struggling during the pandemic.

It’s “heartbreaking” to see farmers dumping their milk and the potential paycheck that comes along with it, said Casey, who has been teaching in Reedsburg for close to 20 years.

Helping people connect the dots to recognize just where their food and milk is coming from is a minor part of the program, too, Casey said.

“Part of our job is to make people aware of the food supply,” Casey said.

Cherney, who has been teaching for 30 years, knows that many of the local dairy farmers are students he’s taught or connected to the students in some way.

“It’s gut-wrenching to know what they’re going through,” Cherney said. “We’re all in this together.”

And Reedsburg FFA is just one of many chapters and other local groups who are trying to do their part to make the strength in community part of that message clear.