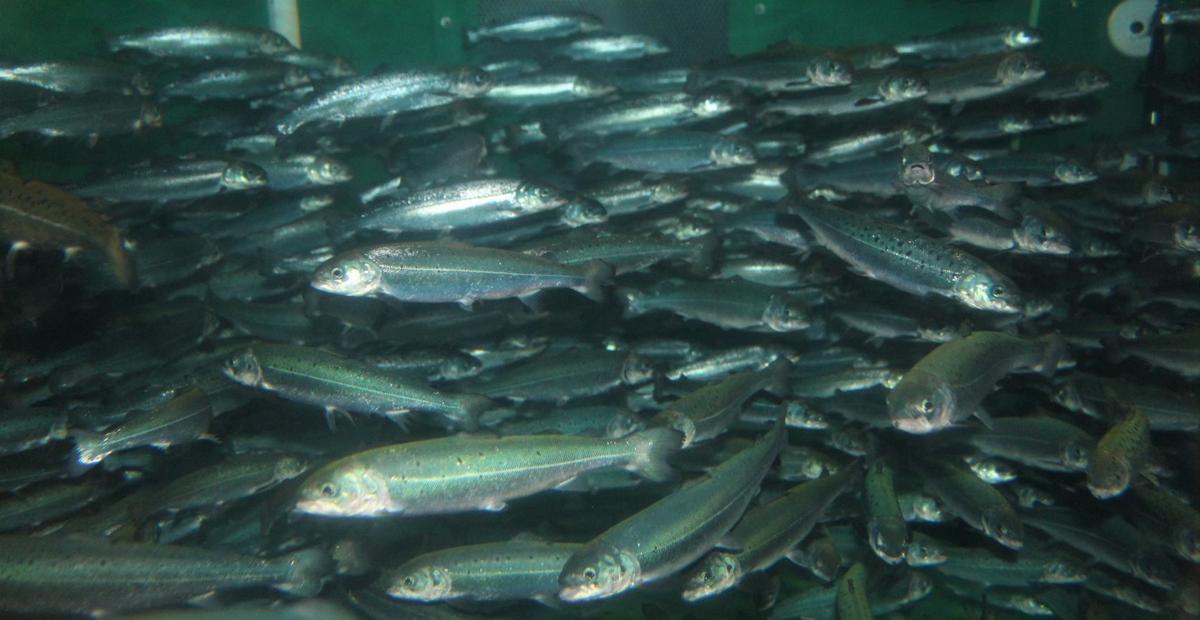 The tanks in the UWSP Northern Aquaculture facility in Red Cliff could very well hold the key to providing enough food to feed the world’s growing population. 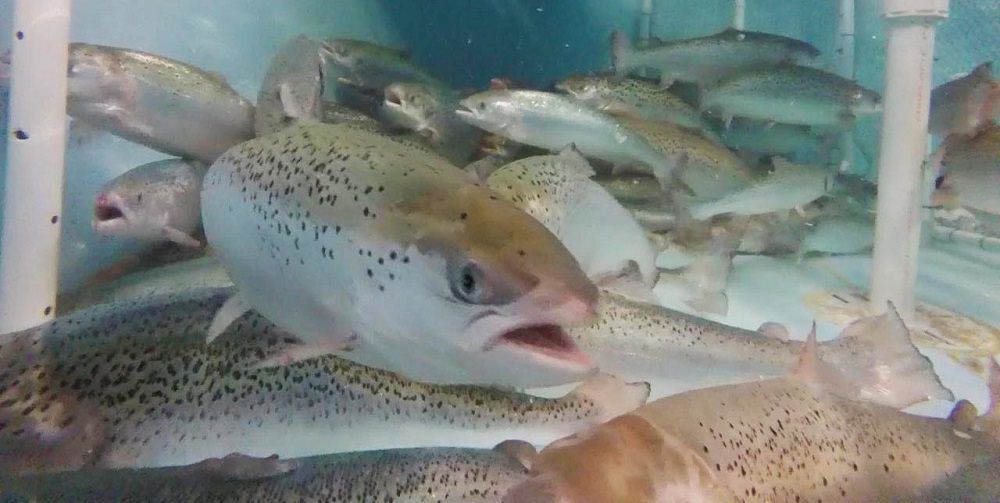 Everything from Atlantic salmon and lake trout to walleyes are raised at the facility. 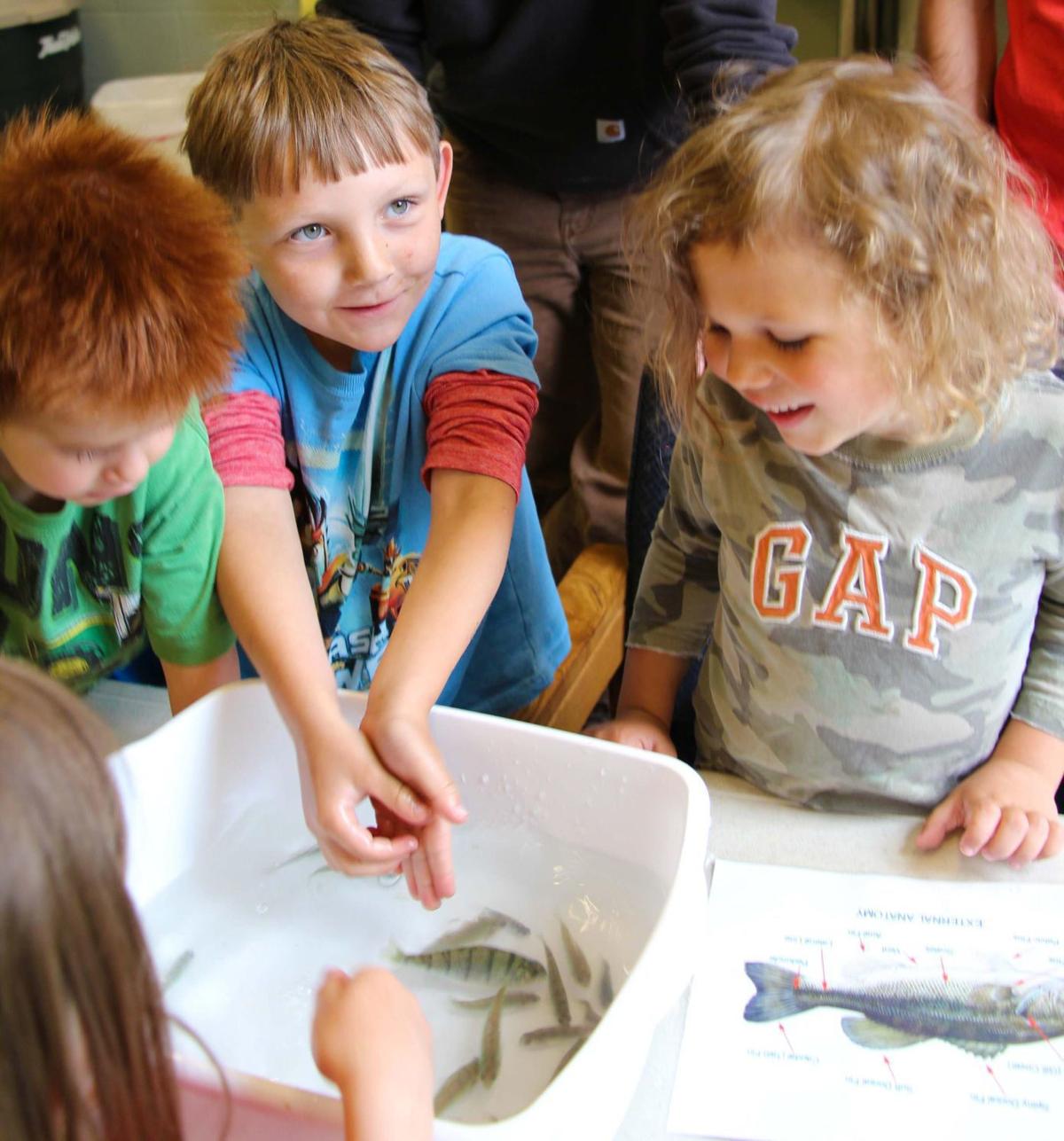 The researchers invite in school groups to teach them about the importance of raising sustainable fish.

The tanks in the UWSP Northern Aquaculture facility in Red Cliff could very well hold the key to providing enough food to feed the world’s growing population.

Everything from Atlantic salmon and lake trout to walleyes are raised at the facility.

The researchers invite in school groups to teach them about the importance of raising sustainable fish.

The nondescript building north of Bayfield is dominated by two swimming-pool-size tanks of fish and six smaller holding pens.

They’re all alive with the writhing bodies of fish, from newly hatched babies known as fry to behemoths that any angler would hang on his wall in an instant.

They swim in a rhythm around the tanks, covered with nets to prevent adventurous fish from leaping out.

But these aren’t just any tanks or just any fish. The entire operation is a test bed, monitored for temperature, phosphate levels, oxygen saturation and food consumed, all with one thing in mind: optimal health and growth of fish that will eventally be used to stock lakes and streams to boost Wisconsin’s angling economy.

The facility, run by the University of Wisconsin-Stevens Point, seeks to understand fish and how they can be farmed in the future to feed the world.

It’s called the Northern Aquaculture Demonstration Facility, a one-of-a-kind aquaculture and fisheries research facility in the Midwest that joins only a handful of similar facilities in North America. For the past 18 years, the facility that lives in the shadow of two other hatcheries in Bayfield County, both open to the public, has worked on ground-breaking projects that influence aquaculture locally and globally.

The facility showcases new advances in aquaculture technology such as sustainable, land-based, recirculating aquaculture while also providing traditional aquaculture systems such as flow-through raceways and outdoor ponds for research projects.

Its mission has been to advance sustainable aquaculture for a northern climate, focusing on species, systems and technologies that relate to Wisconsin and the Midwest.

The facility partners with private industry, tribal entities, state and federal hatcheries, other universities, K-12 schools, companies and other organizations.

Aquaculture is the fastest growing segment of food production globally. With the use of land-based water reuse systems, fish can be raised with little impact on the environment and wild populations. In addition, sustainable aquaculture is helping to meet the seafood demand from a growing population while protecting wild fish stocks from overfishing and exploitation.

The U.S. now imports nearly 90% of its seafood, creating a deficit of $14 billion in 2016, the second-highest natural resources deficit behind crude oil. One of the bottlenecks to U.S. industry expansion is finding qualified and skilled workforce. The UWSP NADF facility helps bridge that gap between education and industry, offering students the skills needed to be successful.

UWSP is the first accredited university in Wisconsin to offer an aquaculture minor and the first in the nation to offer a full semester aquaponics course and aquaponics certificate program. Each year the university sends students to intern at UWSP NADF and other partnership facilities, as well as in technician positions. These students gain the hands-on experience the industry is searching for, thus job placement into the industry soon follows.

In December 2019, UWSP NADF hosted a first-of-its-kind national workshop, bringing in stakeholders from across the nation and as far as Norway to the Harbor View Event Center in Washburn. The workshop allowed experts in Atlantic salmon production to put their minds together and help build the capacity for sustainable aquaculture in land-based water reuse systems.

This year, 2020, will be another exciting year in aquaculture. Science and demand to feed the world will continue to drive the industry. Sustainable solutions are being worked on daily in the nondescript building in Bayfield County.