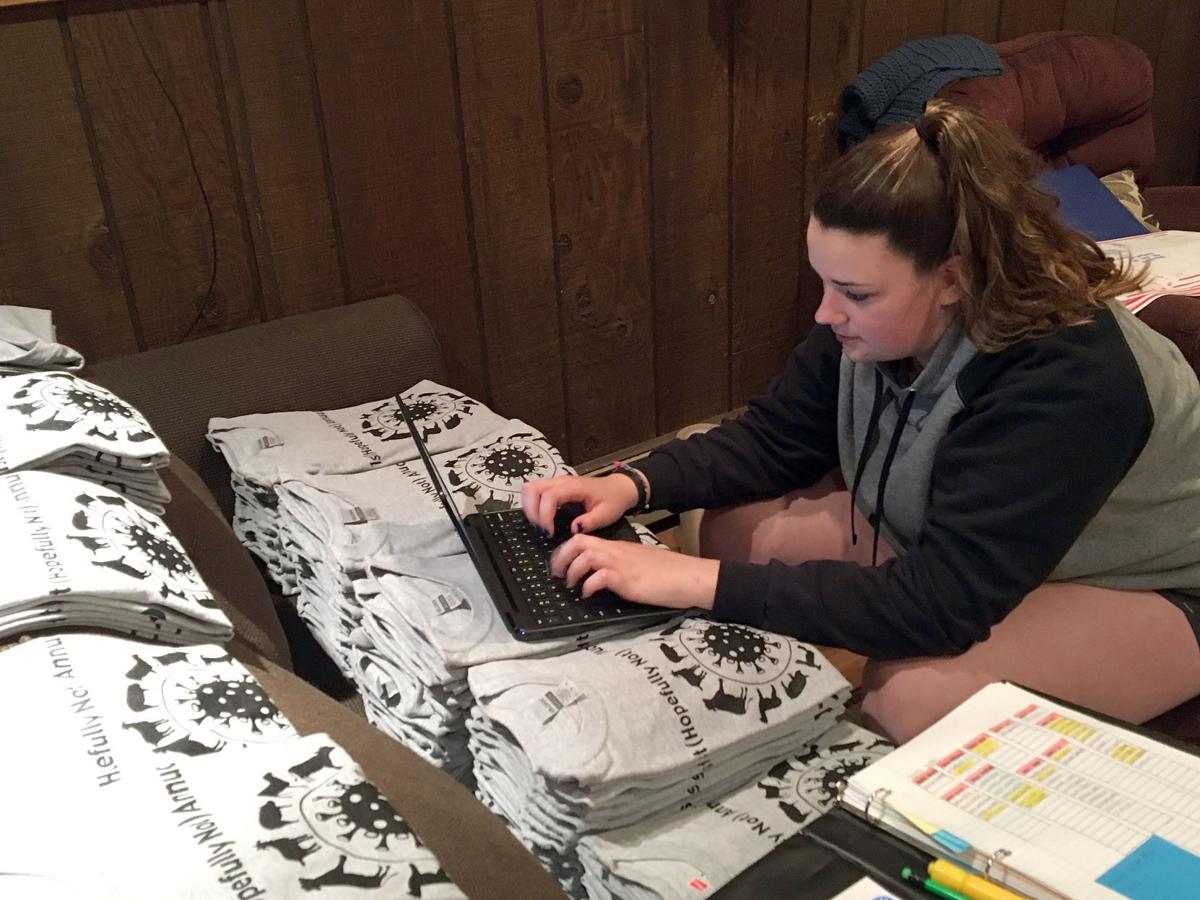 Ally Loosen of Hartford, coordinator of the Corona Kicker Virtual Livestock Show, prepared merchandise orders for participants and supporters of the show. 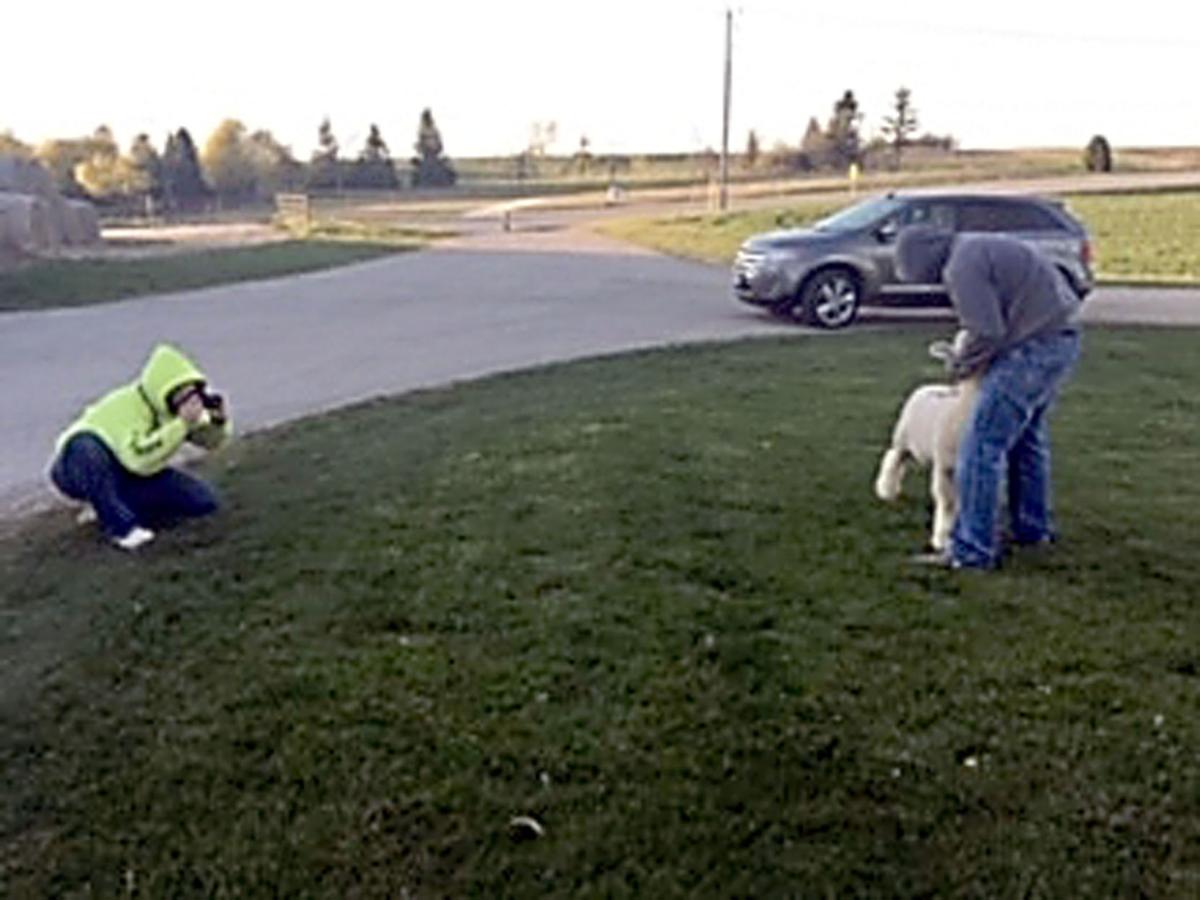 Participants photographed a lamb for participation in the Corona Kicker Virtual Livestock Show.

Ally Loosen of Hartford, coordinator of the Corona Kicker Virtual Livestock Show, prepared merchandise orders for participants and supporters of the show.

Participants photographed a lamb for participation in the Corona Kicker Virtual Livestock Show.

Ally Loosen was, like a lot of people, trying to find ways to cope with the realities of the coronavirus pandemic.

Schools had been canceled for the year, ending her freshman year of high school at Slinger. The spring livestock shows she and her brother, Paul, had planned to take part in were canceled due to the coronavirus, which meant the past-time she had been participating in since she was 4 was gone.

And Ally knew she wasn’t alone in missing the camaraderie that comes along with showing livestock, so she coordinated the Corona Kicker Livestock Show, a virtual show where any junior-level participant anywhere in the country could show their swine, cattle, lambs or goats.

The event, for which Ally lined up all the judges, drew more than 700 head and about 350 exhibitors. The Corona Kicker Facebook page had more than 2,000 followers by the time judging took place at the end of May.

“There have been so many mornings where I would wake up to 20 notifications from Facebook and a dozen texts,” Ally said. “I would read through them and tear up because I never knew how much this idea could touch people.

“My brother, Paul, and I have talked about how it’s a hard thing to cope with, not being able to take our livestock out, but we didn’t know there were so many families and kids that felt the same.”

Registration for the Corona Kicker was $30 for the first entry and $15 for each entry after that and included a complimentary t-shirt or yard sign. Additional yard signs, t-shirts and sweatshirts with “1st (Hopefully Not) Annual Corona Kicker” and “Let the Kids Show” slogans were also available to purchase. All proceeds from the show will be donated to the American Red Cross, National 4-H Organization and National FFA Organization.

Ally’s family lives on a 60-acre farm and runs a wet-to-feeder-calf operation. They raise anywhere between 120 to 160 head of dairy beef bull calves each year. They also have a half dozen beef cows, two Herefords, a Chianina, an Angus, and two Limousins. They have eight show lambs on the property and own about a half dozen brood ewes that are kept at another farm in the area.

She started her show career at the Washington County Fair’s “Half-Pint” or Cloverbud show when she was 4 years old with dairy feeder calves. When she was 8, she started showing lambs and full grown dairy beef steers at the county fair. Over the years, she transitioned over from dairy steers to beef steers. Ally began showing ewe lambs in the open show at the Wisconsin State Fair when she was 10, and began showing market beef and sheep in the junior show at the Wisconsin State Fair as soon as she became eligible.

Ally, who is a member of the Slinger FFA, now shows at county, state and national fairs, jackpots and other shows. Ally and Paul have found success at every level. They have won their market show and showmanship at county fair many times, been named overall breeding champions and showmanship at the Wisconsin State Fair, and been named champions at nationals, including the third overall Prospect at Minnesota Beef Expo.

But with spring showing opportunities dwindling, the idea of the virtual show came about in the family driveway, Ally said.

“I was talking with my mom, aunt and uncle about how we can advocate for the show industry,” she said. “All of our jackpots for the season were pretty much gone, so we wanted to do something to help.”

She said they talked about yard signs and t-shirts, but didn’t think that was big enough.

“I went in the house and shot a text off to the jockey I buy cattle from and that was how we got this one kicked off,” Ally said. “I sat down at the computer and started making a Facebook page, Venmo, and getting the details of the show together. It just kind of blew up from there!”

Ally said she had to learn to balance organizing the show with finishing up her freshman year of high school, which included honors courses. She said she has two binders with merchandise and registration information and a few spreadsheets set up on different computers to handle everything.

“It’s been kind of crazy over here between the show, school and working with our own livestock,” Ally said. “I went ahead and set it all up on Google Drive, thinking it would be a cake walk. We ended up hitting a few bumps in the road as far as video downloads and uploads, but we got it done.

“It has really stressed my organization skills, but it’s been a very fun thing through it all.”

Ally said when she created the Corona Kicker, she didn’t have particularly high hopes. Their original goal was to have 100 head total take part in the show.

“When we started this project, the thought in our head was ‘we’re just a no-name family from Small Town, USA’,” Ally said.

As can be the case with things on the internet, Ally said they got two or three negative comments, but overall the experience “has been amazing.”

“It’s been such a heartwarming experience, one of the only silver linings we’ve seen to this pandemic,” she said.

With the cancellation of both the Wisconsin State Fair and Minnesota State Fair and numerous county fairs in Wisconsin and around the country, Ally said she is already thinking about creating a second virtual livestock show.

“The next one, we want to be bigger and better than this one was,” she said.

Ally said she would like to get some help in the IT side of things to get a website put together for the next show. “I think that was the one thing that we really needed for this show to be improved,” she said.

On the participant side of things, Ally said she thought the Corona Kicker ran pretty well. Still, she said, there are definitely things she is looking forward to for when in-person showing resumes on a regular basis.

“It was a lot easier than going to a show, not having to take load up the tack,” Ally said. “There was definitely a little hole in the show where our ‘family’ used to be. We have met so many amazing people through live shows that we constantly travel with for events. It was sad not having them to fit with, nap with, laugh with and have success with.

“Despite missing them, we were able to meet so many more people that we never would have at live shows. I think we will recognize so many more friendly faces at the nationals. That’s what made it so much better.”