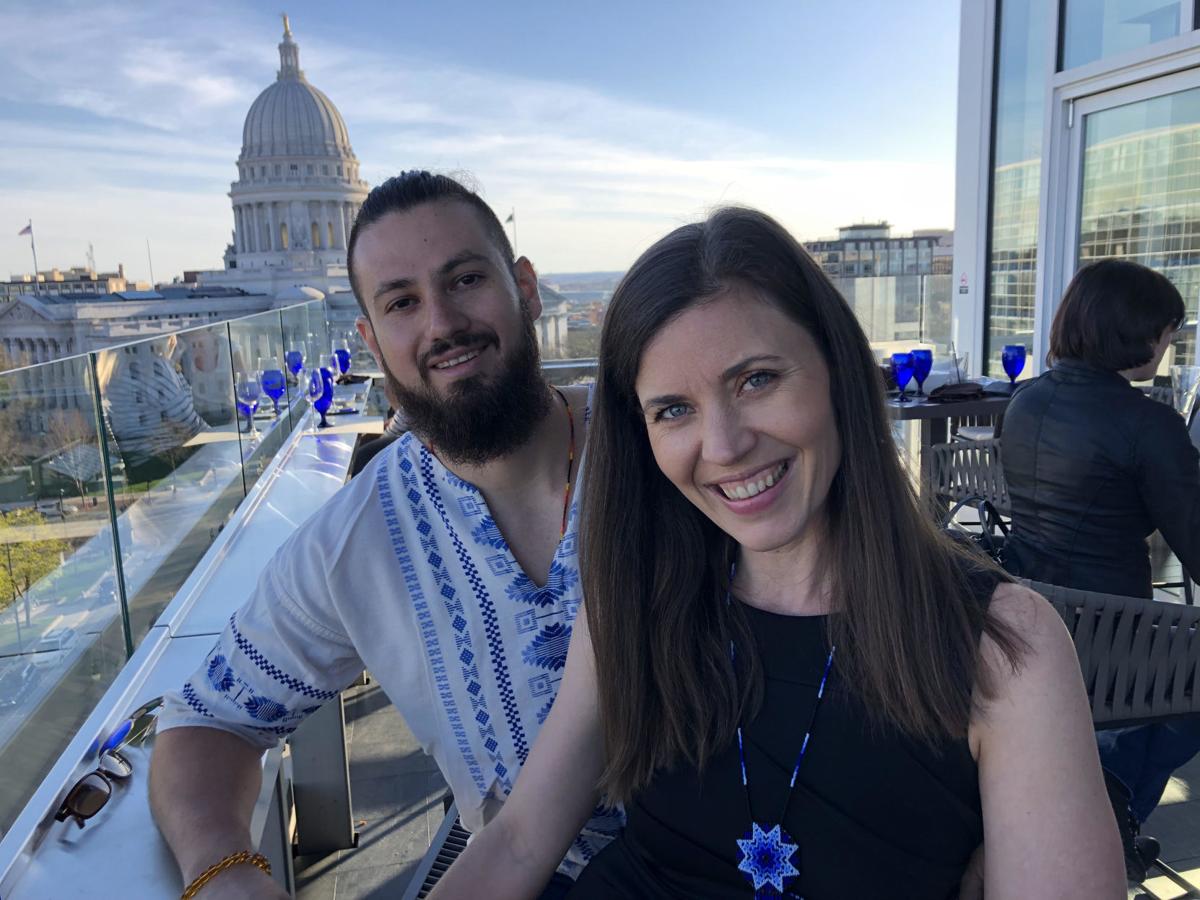 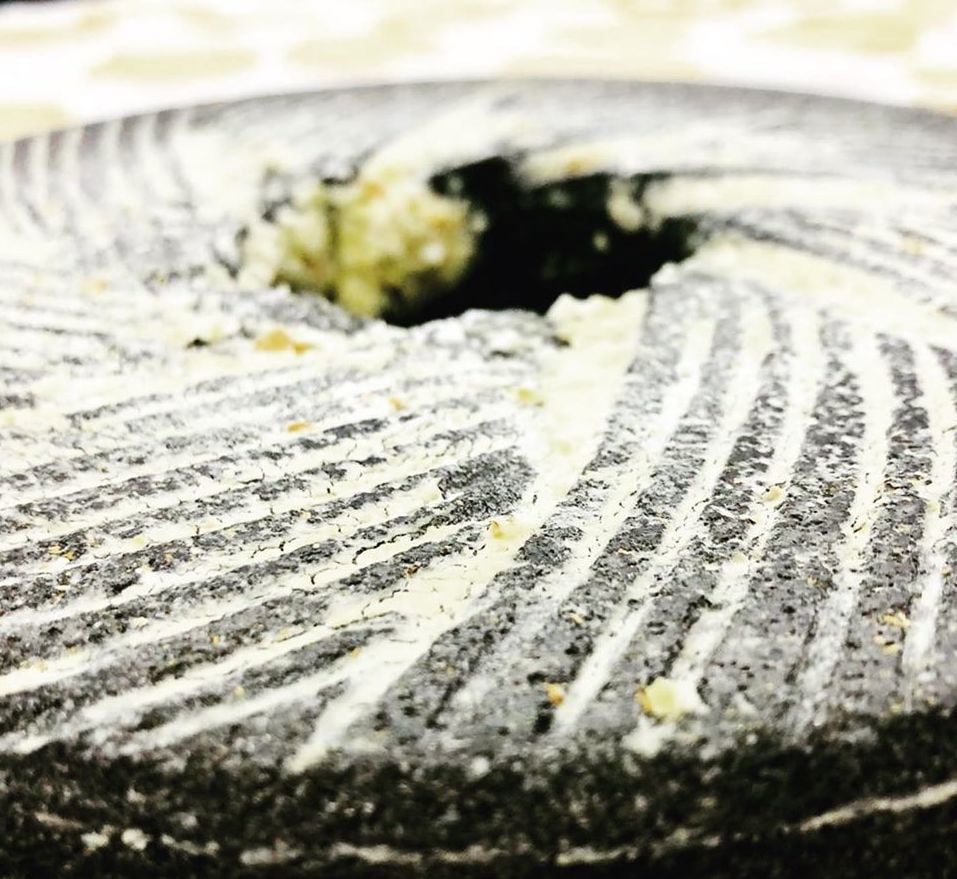 Tortillas made at Tortilleria Zepeda are ground on a volcanic rock stone at Lonesome Stone Milling in Lone Rock. 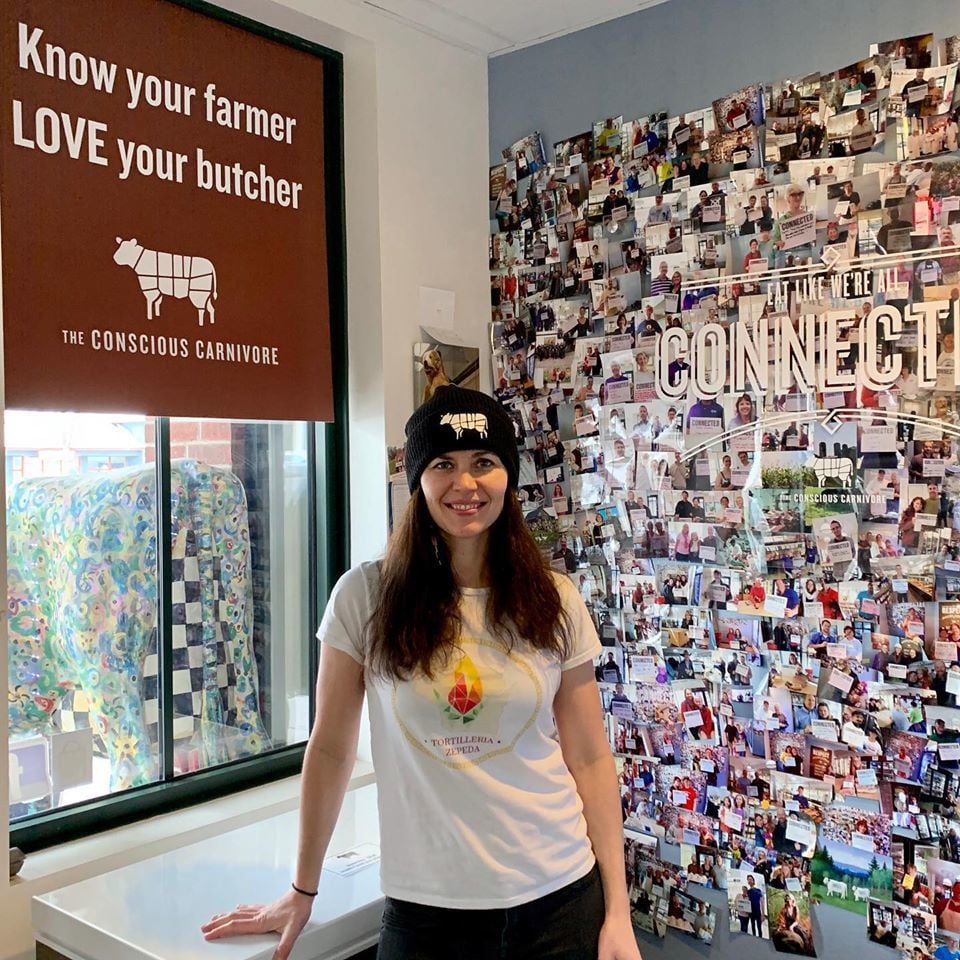 Julian Zepeda takes a bite out of a taco thst featured his tortilla at a local Madison business. 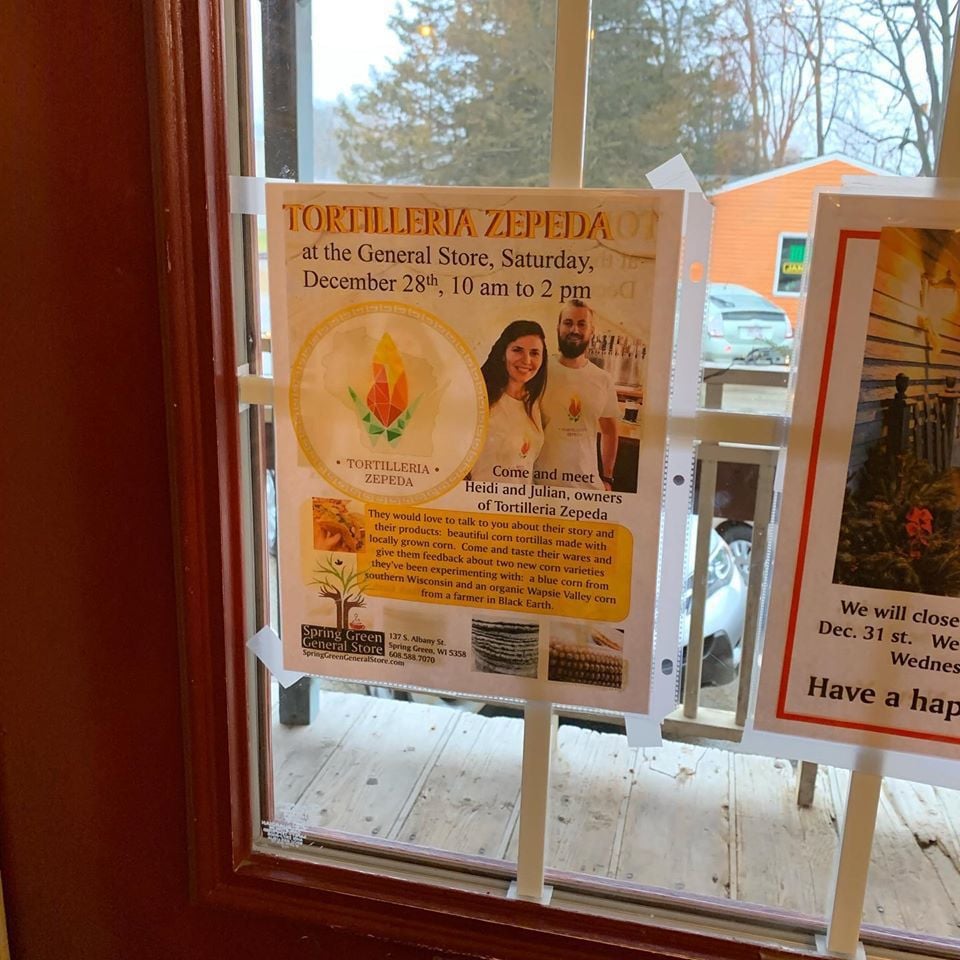 A poster promoting a tortilla-tasting demonstration hung recently at the Spring Green General Store, a business Heidi Zepeda remembers frequenting with her family as a child.

Tortillas made at Tortilleria Zepeda are ground on a volcanic rock stone at Lonesome Stone Milling in Lone Rock.

Julian Zepeda takes a bite out of a taco thst featured his tortilla at a local Madison business.

A poster promoting a tortilla-tasting demonstration hung recently at the Spring Green General Store, a business Heidi Zepeda remembers frequenting with her family as a child.

MADISON — When Heidi Zepeda was a little girl in the 1980s, she would accompany her father to the neighboring town of Lone Rock to grab groceries and animal feed for her family’s organic, grass-fed beef farm in rural Clyde. She also went with her father to the Spring Green General Store so that the beef from their farm could be sold to the market.

“Thirty plus years later and it’s where one of our first retail clients went,” Heidi said with a smile.

Since 2016, she and husband, Julian, have owned and operated Tortilleria Zepeda, making from scratch authentic, locally sourced corn tortillas using a pre-Hispanic nixtamalization technique. They utilize shared space at Lonesome Stone Milling in Lone Rock to make their tortillas — something that has come full-circle for Heidi, who grew up in the area.

“I have so many fond memories of Lone Rock,” she said. “I never thought I’d be back in the area — it’s so nostalgic.”

The feeling is similar for Julian, who grew up in Puerto Vallarta, Mexico, in what he called “a traditional Mexican family.” His family had a restaurant, and Julian had spent many hours in the kitchen observing; however, he was working as a marine biologist when he met Heidi in 2013.

In the 1990s, Heidi’s father purchased a 30-acre lime plantation in Puerto Vallarta, Mexico, and in 2013, he sent Heidi to there to sell it after it wasn’t as fruitful as anticipated. It was during that trip that Heidi met Julian, and soon they were married and retreated back to Wisconsin.

After working in a lab for the first two years in Madison, Julian began wondering why he couldn’t find an authentic Mexican taco in the state’s capital city. He asked Heidi, “With fields upon fields of beautiful corn in Wisconsin, why is no one making fresh corn tortillas?”

And from that idea, Tortilleria Zepeda was born.

“I’m full time tortillas now,” Julian said. “I would have never imagined but I don’t see myself doing anything else now.”

He was able to connect with a local corn farmer and began making his own tortillas, giving them away to close friends and family to try at first. Everyone who tried the tortillas had the same positive reaction — and even people that claimed they didn’t like corn tortillas were commenting on how tasty there were.

“We thought we might as well start selling them,” Julian said.

Last year, the Zepedas started selling their tortillas commercially, with customers finding their product in retail shops like the Spring Green General Store, on menus at farm-to-table restaurants like Brix Cider in Mount Horeb and featured at Madison’s well-known butcher shop, The Conscious Carnivore. The Zepedas also frequent area farmers’ markets and hope to expand their presence into other farmer’s markets this year.

“The best platform for us has been social media,” Heidi said. “Word of mouth has been powerful too. And other times, we just happened to get (a tortilla) in the right person’s mouth.”

Friends, family and co-workers continue to spread the word about Tortilleria Zepeda, with local chefs also taking interest in having the tortillas featured on their menus. They also receive referrals from Lonesome Stone Milling co-owners Gary Zimmer and Gilbert Williams.

At Lonesome Stone Milling, Williams shares his expertise with Julian and Heidi, helping them both on the production side and on the farmer side of things. Importantly, Williams helps establish relationships with local corn farmers so the Zepedas can work directly with the farmer to source the corn for the tortillas that they make artisanally in small batches.

“People are really nice; they want everyone to be successful so they talk amongst each other. Everyone is connected,” Julian said.

While Heidi works at Trek Bicycle during the day, she and Julian drive to Lone Rock from Madison three to four evenings a week and on weekends for tortilla production. They work around the schedules of others at the mill and when almost everyone else heads home for the day at 4 p.m., they crank up the music and make tortillas.

Making tortillas is a far cry from Julian’s days of being a marine biologist, but he tries to combine his background in science with his food experiences; he still experiments a lot, combing over data and creating an analysis.

He recently had the opportunity to return to Mexico for a three-month apprenticeship, where he continued to learn and perfect the tortilla-making process.

There are many parallels between Mexico and the United States when it comes to a food movement in which consumers are gravitating toward simple foods that are nutritious and authentic, he said. Mexico has also seen the industrialization of tortilla-making, with added ingredients finding their way into commercial tortillas, and there’s a movement to go back to the basics.

“It’s a different product that we have and we’ve been converting people to corn tortillas,” Julian said. “We want to be open and transparent too. We make a clean product with no preservatives.”

And the Zepedas have no immediate plans to get bigger. They aim to remain local — using local corn for their product and local businesses to distribute it.

“No company is doing the same,” Julian said. “There’s a niche for it and our name is getting out there.”

For more on Tortilleria Zepeda, visit tortilleriazepeda.com or find them on Facebook @TortilleriaZepeda.