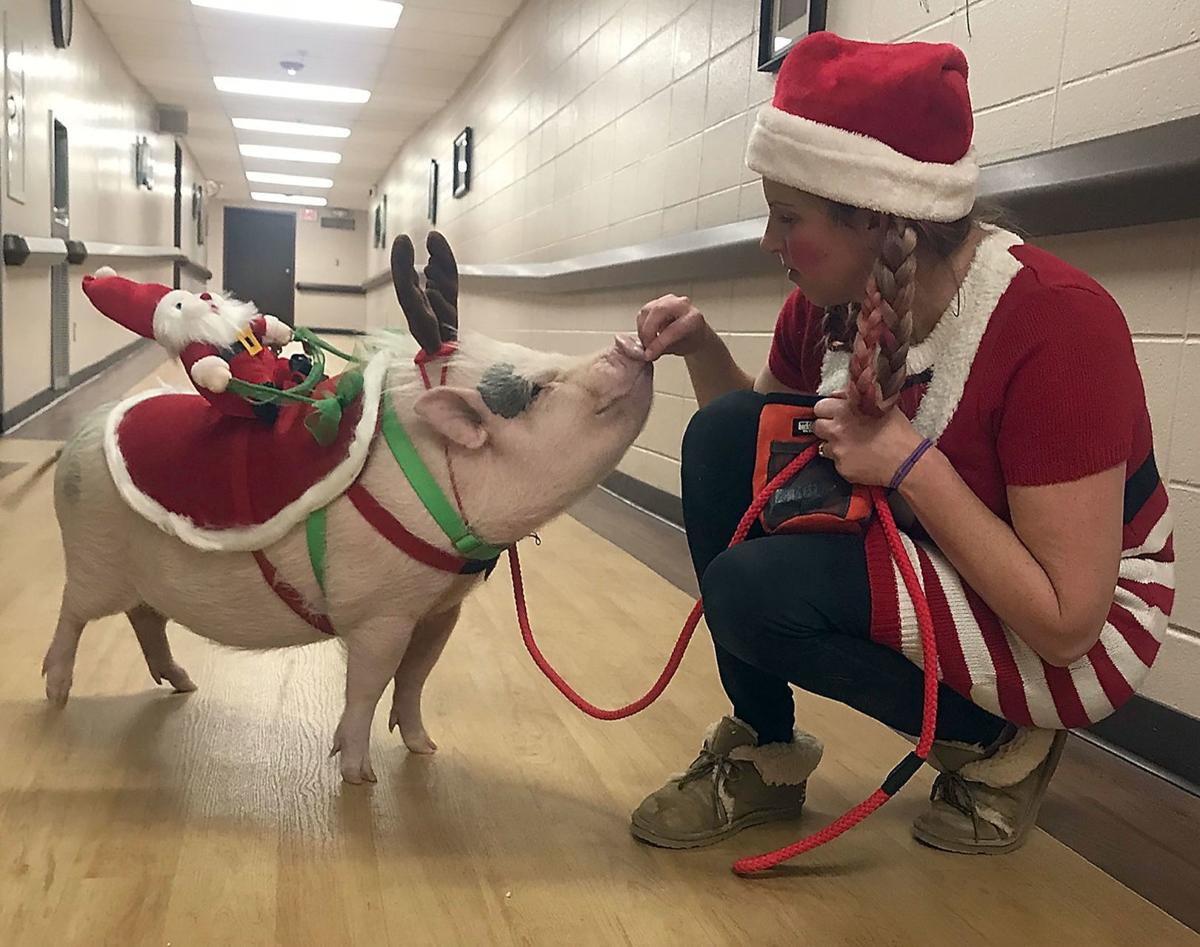 When mini pig Brutus visited the Rolling Hills Rehabilitation and Retirement Home during the holidays, he was dressed for the season. Brutus’ owner Jancee Doemel has been training Brutus as a therapy pet so he can bring joy to the home’s residents. 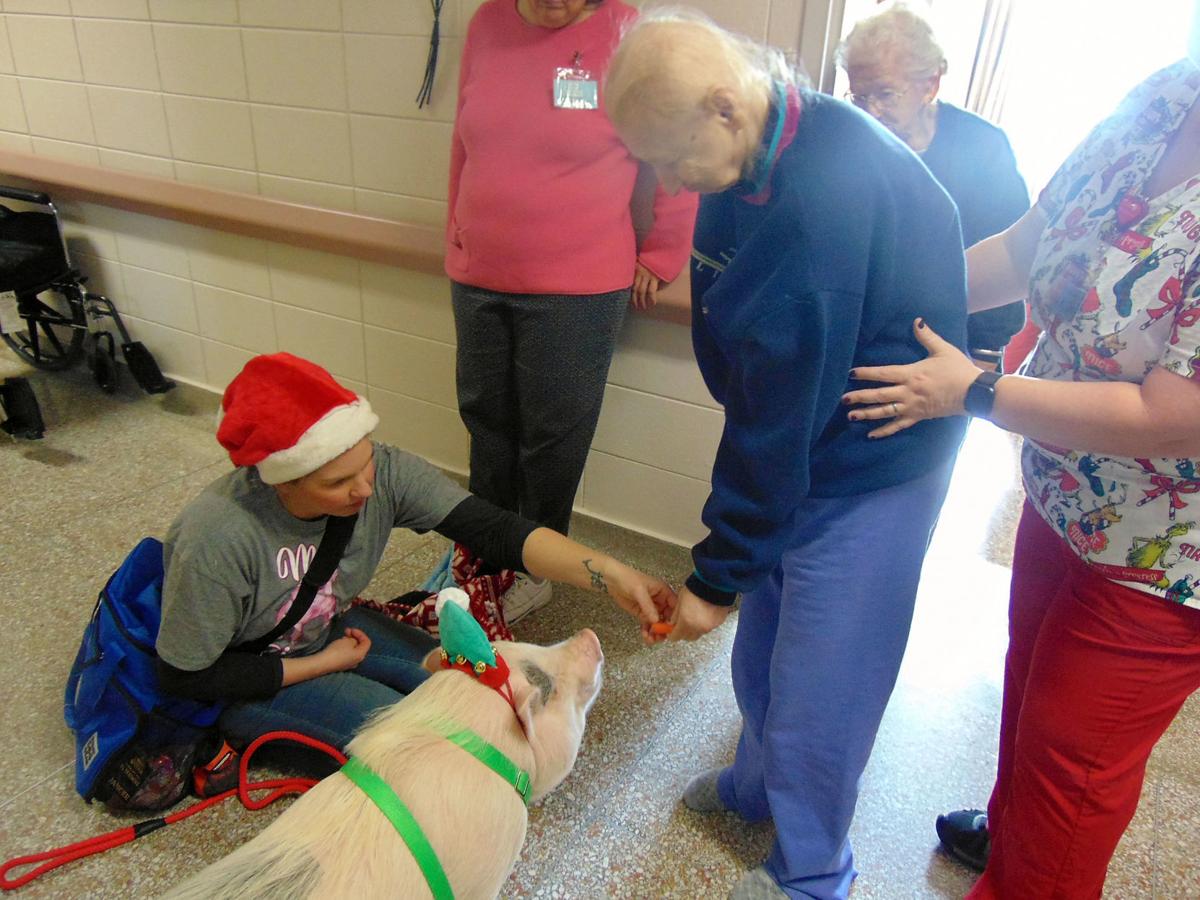 During a recent visit to the Rolling Hills Rehabilitation and Retirement Home, Jancee Doemel and her pet pig, Brutus, met home residents, Sharon Oyer, front, and Edna Eckelberg, back. Oyer was handed a carrot to feed to the therapy-trained mini pig. 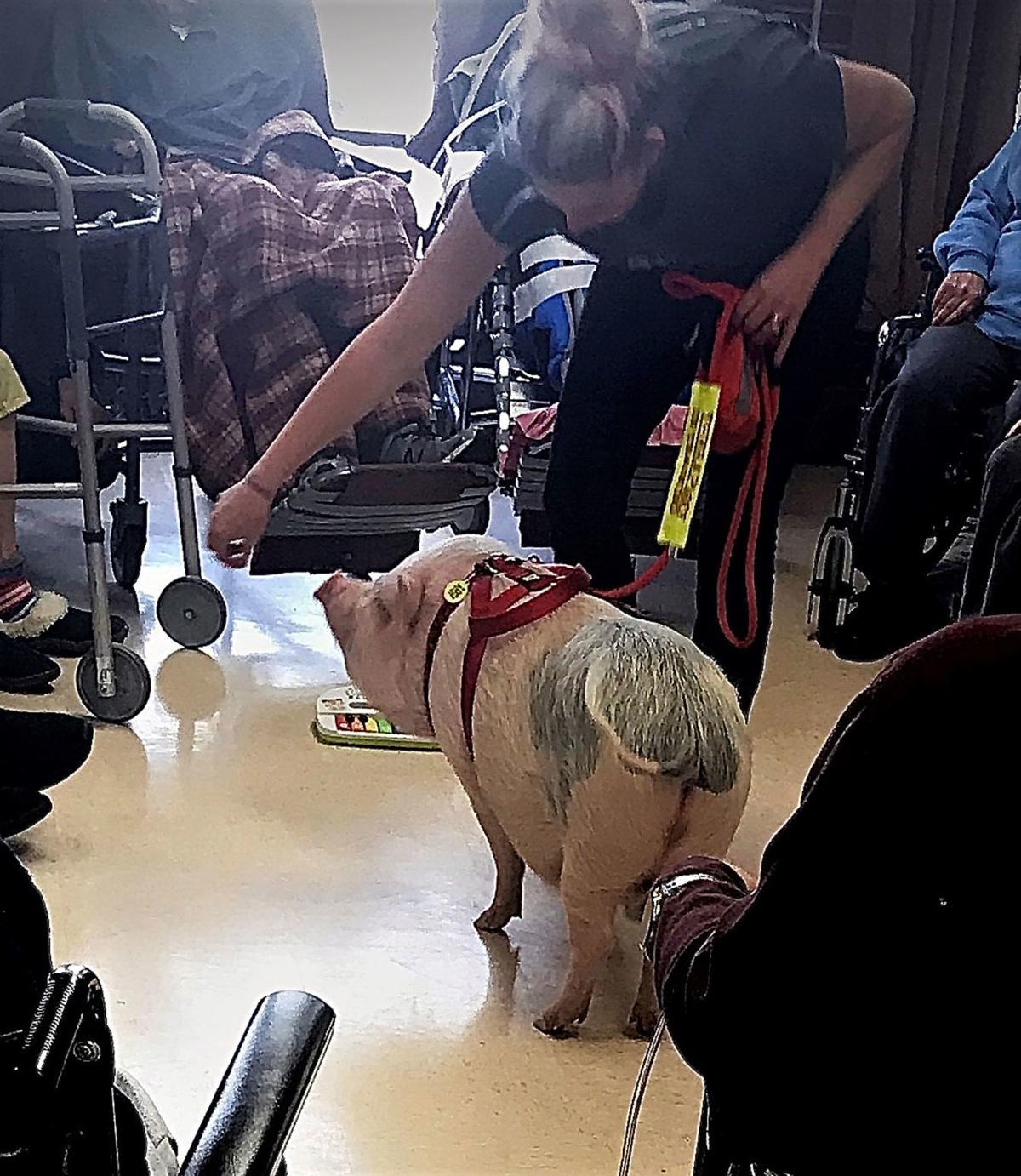 Jancee Doemel gave her mini pig Brutus the cue to circle when the two entertained residents at Rolling Hills Rehabilitation and Retirement Home. Brutus is in training to become officially certified through the American Mini Pig Association therapy program.

When mini pig Brutus visited the Rolling Hills Rehabilitation and Retirement Home during the holidays, he was dressed for the season. Brutus’ owner Jancee Doemel has been training Brutus as a therapy pet so he can bring joy to the home’s residents.

During a recent visit to the Rolling Hills Rehabilitation and Retirement Home, Jancee Doemel and her pet pig, Brutus, met home residents, Sharon Oyer, front, and Edna Eckelberg, back. Oyer was handed a carrot to feed to the therapy-trained mini pig.

Jancee Doemel gave her mini pig Brutus the cue to circle when the two entertained residents at Rolling Hills Rehabilitation and Retirement Home. Brutus is in training to become officially certified through the American Mini Pig Association therapy program.

A rescued mini pig is giving back to his community as a therapy animal. After his adoption by Jancee Doemel of Sparta, mini pig Brutus has been in training as a therapy pig to bring joy to the residents of a Sparta area retirement home.

Rolling Hills Rehabilitation and Retirement Home Director Linda Smith says the residents at the facility as well as the staff have loved Brutus’ visits. Doemel says Brutus seems to like going to the nursing home as much as its residents enjoy having him stop by. Those visits can be especially poignant for residents who grew up on farms and raised hogs.

“It is really neat to listen to the residents talk about their farm experiences and the similarities and differences they see with Brutus,” Doemel said. “I also have Brutus wear something fun on every visit. I’m not sure if he enjoys that part as much as everyone else though, but I can assure you his belly is fully compensated for putting up with it.”

So far, the mini pig’s skill-set includes sit, stay, come, go up and down steps, use a ramp, spin in a circle, ring a bell, play a piano, high-five and kiss.

When Doemel was first adopted Brutus a year ago, the mini pig joined three other minis in the Doemel household, all are rehomed or rescued pets. The veterinarian checking over Brutus estimated the pig was about six or seven months old at the time.

Doemel learned the little porcine animal needed a forever home from a post on a Facebook mini pig group page. The caring woman posting the information about Brutus had discovered he was in an unpleasant situation and she didn’t want Brutus to “end up on someone’s dinner table.”

It’s thought Brutus’ original owner believed him to be a micro-mini or teacup pig, but when he started growing larger and larger, he was no longer wanted.

“It is important to note that there is no such thing as a micro-mini or teacup pig that will stay around 20 pounds full grown,” Doemel said. “My advice to anyone considering a mini pig as a pet is to do a lot of research prior to getting one. Pigs are not like dogs. They require a lot of attention and stimulation. A bored pig can be very destructive. It can be hard to find a vet that will see a mini pig. Most cities consider mini pigs livestock and therefore they are not allowed. And lastly, please adopt, there are many pigs in rescues across the country that are looking for homes.”

Except for his spunky and sassy moments, Doemel says Brutus tends to be easy going and has a unique personality.

“Pigs throw temper tantrums when they don’t get their way,” Doemel said. “They also have the intelligence of a 4-year-old (child). Pigs are very sensitive to human emotions. If I am not feeling well, Brutus senses this and will want to snuggle with me to offer his support. He also likes to know where I’m at and follows me all around the house. He may be a little spoiled.”

While doing online research to expand her mini pig knowledge, Doemel was intrigued by pet therapy. She came across the American Mini Pig Association and the pet pig therapy training program the organization offers. At the time, she determined the two pigs she had were not the right fit for the program. That changed when Brutus came along.

AMPA pig therapy training program advises not every mini pig is a good candidate for the job of therapy pet. The organization says good candidates should have a laid back and social personality and will readily accept training. The trainee should want and enjoy the work as much as the trainer does or even more so. Doemel believes her pig does.

“I looked more into doing therapy but still wasn’t sure how people would react to it,” Doemel said.

The defining moment for Doemel was when she took Brutus to a pet friendly store and was overwhelmed with the reaction from others in the store toward her and Brutus. The other customers were approaching the two, asking a lot of questions and listening to his story. Smiling adults and children wanted to touch him admitting they had never seen a pig up close, let alone be able to touch one.

“I thought, ‘Wow!’ Look how truly happy everyone became just because they got to experience a pig,” Doemel said. “It’s like a ‘unicorn effect;’ it’s not every day you see a pig doing therapy work. It’s something different and really gets your attention. It is a very rewarding and fulfilling experience to know Brutus and I made someone’s day.”

The two began therapy training in earnest in October and had their first visit at Rolling Hills in November.

“I think if you asked Brutus, he would say, ‘of course, I love it. I just show up, do some tricks, make people smile and get rewarded with a ton of Cheerios,’” Doemel said. “Pigs are very food motivated. Combine that with their high level of intelligence and it can be fairly easy to train a pig to do many things. Brutus is getting more and more comfortable every visit we make.”

Since pigs are prey animals, their instinct tells them to always be on alert. While that quality can be challenging at times, Doemel says Brutus is adapting very well to being around carts and wheel chairs and larger groups of people. He is always swooshing his tail — a sign of being happy or content. This is something everyone notices and comments on.”

Doemel reports Brutus has almost mastered all the requirements to become officially certified through the AMPA therapy program. The mini pig is currently working on shape puzzles and scoring a basket with a mini basketball hoop.

In addition to the three other mini pigs and Doemel, Brutus shares a home with Doemel’s husband, their two teenage sons, four dogs and two cats.

Fans can follow Brutus’ adventures on his Facebook page: BRUTUS The Mini Pig. Anyone wanting more information or to schedule a visit from Brutus can email brutustheminipig@gmail.com.