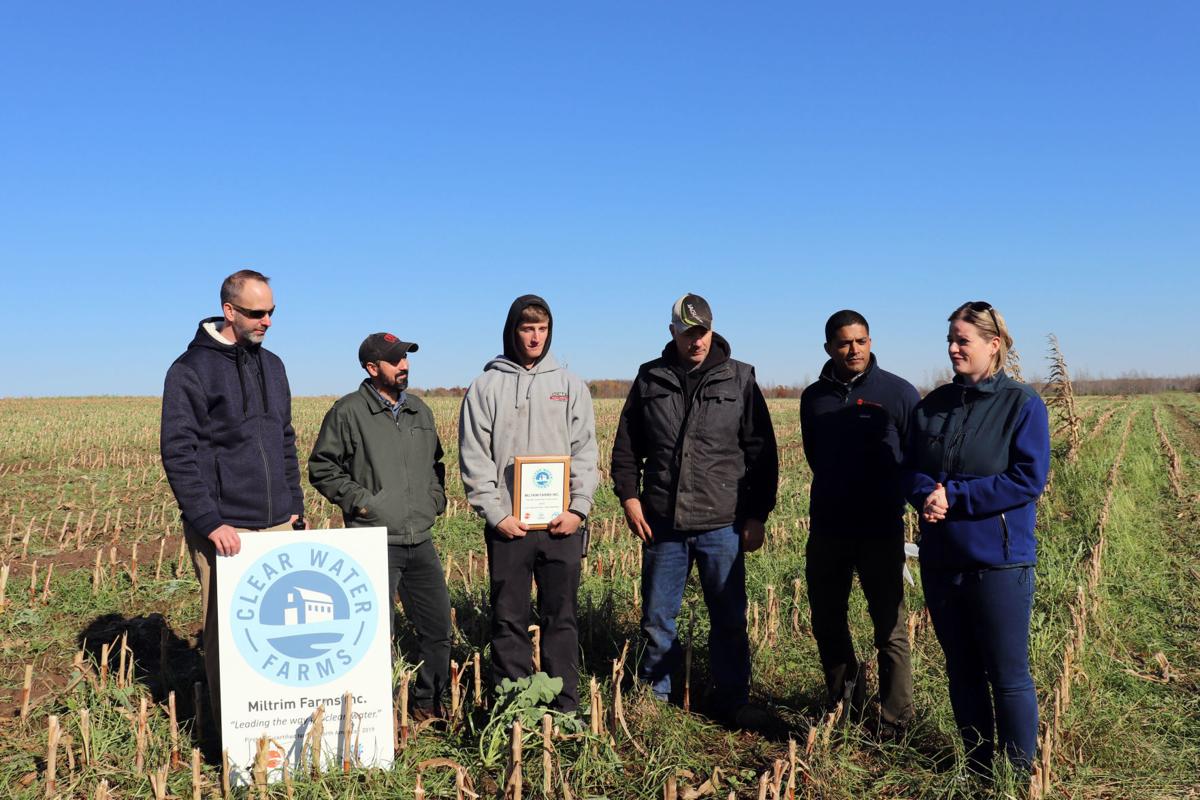 Miltrim Farms accepted the award for being the first farm in North America to be AWS-certified through the Clear Water Farms program earlier this fall. 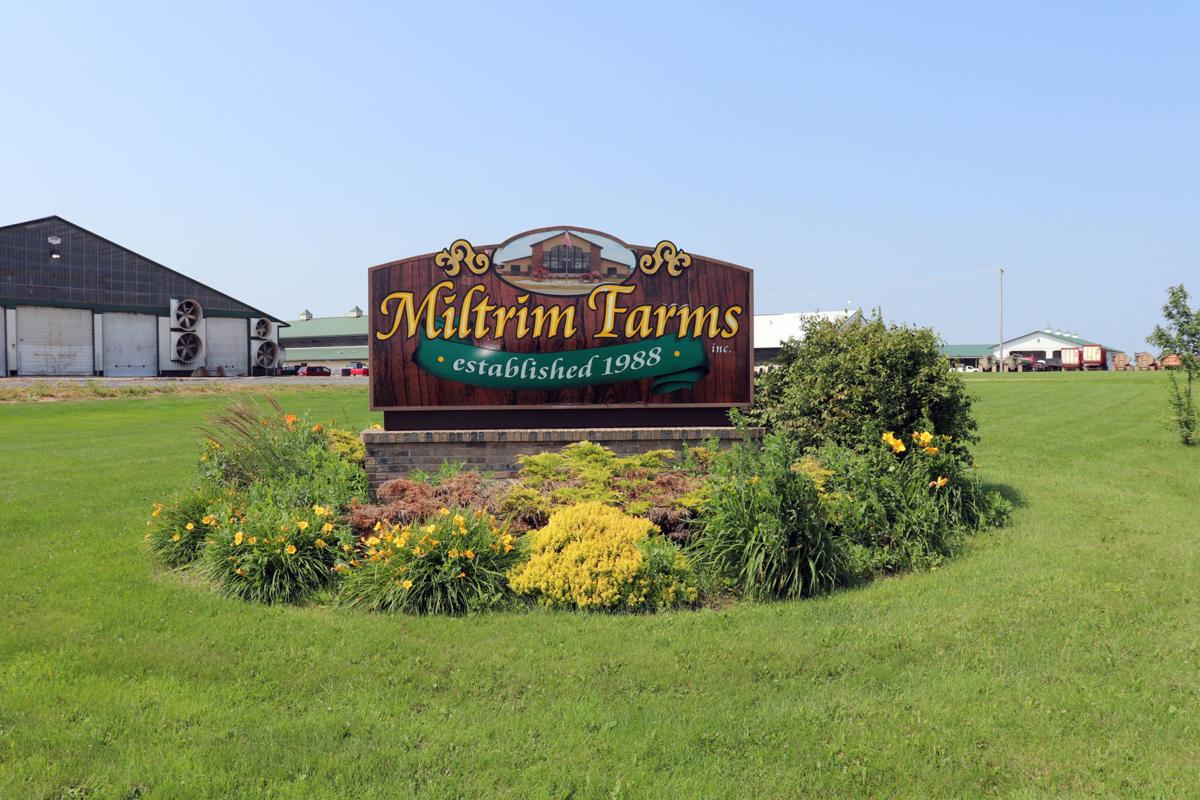 Miltrim Farms in Athens became the first farm in North America to be certified using the AWS Standard.

Miltrim Farms accepted the award for being the first farm in North America to be AWS-certified through the Clear Water Farms program earlier this fall.

Miltrim Farms in Athens became the first farm in North America to be certified using the AWS Standard.

ATHENS — Showcasing and verifying their water stewardship practices isn’t about the glory of it for Miltrim Farms. It’s about creating a pathway for other farms to receive the same recognition in the future.

Certification on the AWS Standard means that an organization meets and surpasses existing regulatory standards. The standard identifies a comprehensive and vigorous process for water stewardship and verifies the progress of participating groups through independent auditing.

Just because Miltrim was the first farm to achieve this status, though, certainly doesn’t mean they want to be the last.

“We don’t want to stay the only one,” said David Trimner, general manager of Miltrim.

There are a lot of farms out there who are also doing similar things as Miltrim is and who are trying their best, Trimner said. Miltrim is simply setting the pathway on how to receive the recognition for those good practices.

Miltrim, started in 1988 by Trimner’s dad, uncle and grandpa, began with 40 cows. Now, the farm has 2,100 milking cows, with plans to expand even more, Trimner said.

The growth of the operation isn’t just in their herd size, though. The number of ways that they are working to protect the water resources around them has grown, too.

Four years ago, the farm began embracing cover cropping and no-till practices in an effort to help save water, Trimner said. The use of new technologies in the operation, including robotics, has helped reclaim more water as well.

They wanted to try new things and push the envelope, Trimner said.

In achieving their certification, Miltrim was also the first to participate in the Clear Waters Farm program under the River Alliance of Wisconsin.

Miltrim began their water stewardship practices before the Clear Water Farms program really started, but taking part in the program once it began gave Miltrim a good guide to measuring and documenting their efforts, something that hadn’t been there before, Trimner said.

The program offered a verification of the practices they already had in place, he added.

The Clear Water Farms program started a couple of years ago in earnest, said Michael Tiboris, Clear Waters Farms director, but the idea had been floating around for some time before that.

AWS, an international organization, has their North American headquarters in Milwaukee, which provided Clear Water Farms an opportunity to partner with them to see if expanding the standard to agriculture, as opposed to continuing to focus primarily on industry, was a good option, Tiboris said.

To start the certification process in an agricultural setting, Clear Water Farms looked to Marathon County, where they had an existing relationship, and Miltrim was quick to raise their hand to participate as the first farm in the program, Tiboris said.

“They are personally very interested in protecting water resources around them,” Tiboris said.

Miltrim wanted to “let people know there are farms that care about water,” Trimner added.

Water stewardship is also a good business investment as farms can be sure they are protected from regulatory burdens and they can add value to the community around them, Tiboris said.

As water quality is a “significant” issue in the state of Wisconsin and farmers are often seen as a contributing problem, the program gives farms an opportunity to adopt practices, speak out about them, show they’re putting in the effort and help lessen any negative reputation, Tiboris said.

Being certified on the AWS Standard can help people “see that farms can be part of the solution,” Trimner said.

Placing blame doesn’t make anything better, Trimner added, but working together can.

Tiboris said the purpose of Clear Waters Farms and their work to help farms gain AWS certification is threefold: to form a cluster of certified sites, creating a situation for monitoring water quality improvement; to give credit in a verified, credential-based way to farms who are practicing good water stewardship; and to focus and consolidate available resources for farmers who are interested in water stewardship.

Farmers are motivated to practice water stewardship and many are already doing it, Tiboris said. But many farmers may see those practices as financially out of reach or may want to be sure that their time investment will produce the desired results.

Clear Water Farms is designed to take some of the guesswork of the water stewardship equation.

“This partnership with Miltrim and River Alliance of Wisconsin is a great demonstration that Wisconsin can be a leader on water quality improvement and farm community economic development nationally,” Matt Howard, director of AWS North America, said in a news release.

Additional farms and agricultural processors are being recruited to take part in the Clear Water Farms program. They’re currently looking to expand to more than 10 farms in Marathon County and the Eau Pleine Watershed, Tiboris said.

“This is the beginning of a larger program,” Tiboris said, adding that they’ve worked to created a replicable model that can be used by other farms moving forward.

While Clear Water Farms worked with Miltrim on their certification for approximately two years, Tiboris said, they expect the process to take a little less time in the future now that it has been gone through once.

Although Miltrim was the first farming operation in North America to adopt the AWS Standard, major industry players, such as MillerCoors, had already adopted the standard.

For more information on Clear Water Farms, visit www.wisconsinrivers.org/clear-water-farms. Additional information on the AWS Standard can be found at a4ws.org/the-aws-standard-2-0.