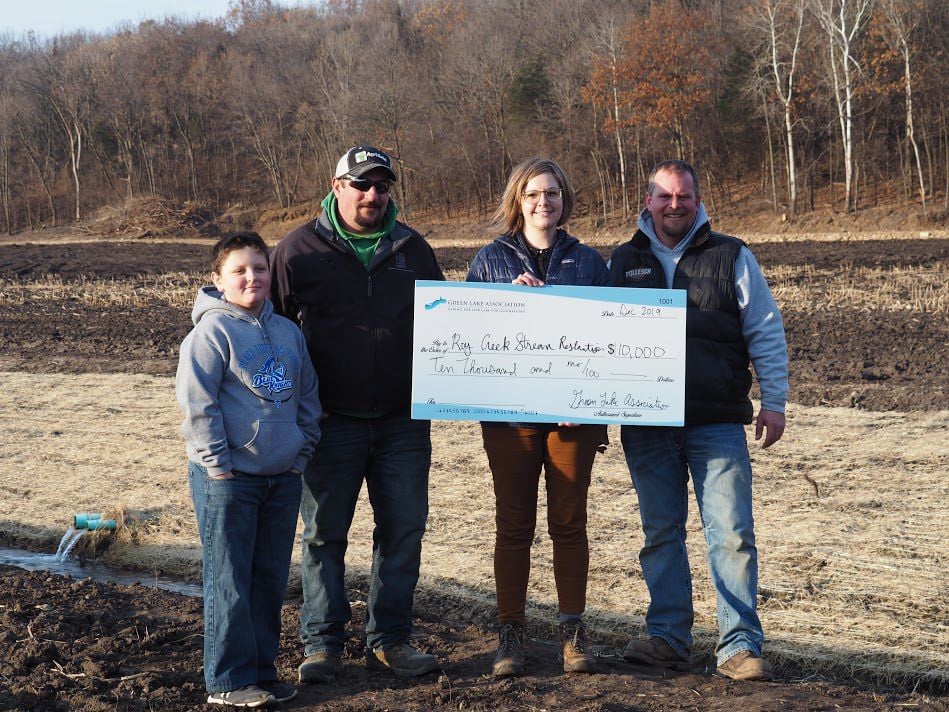 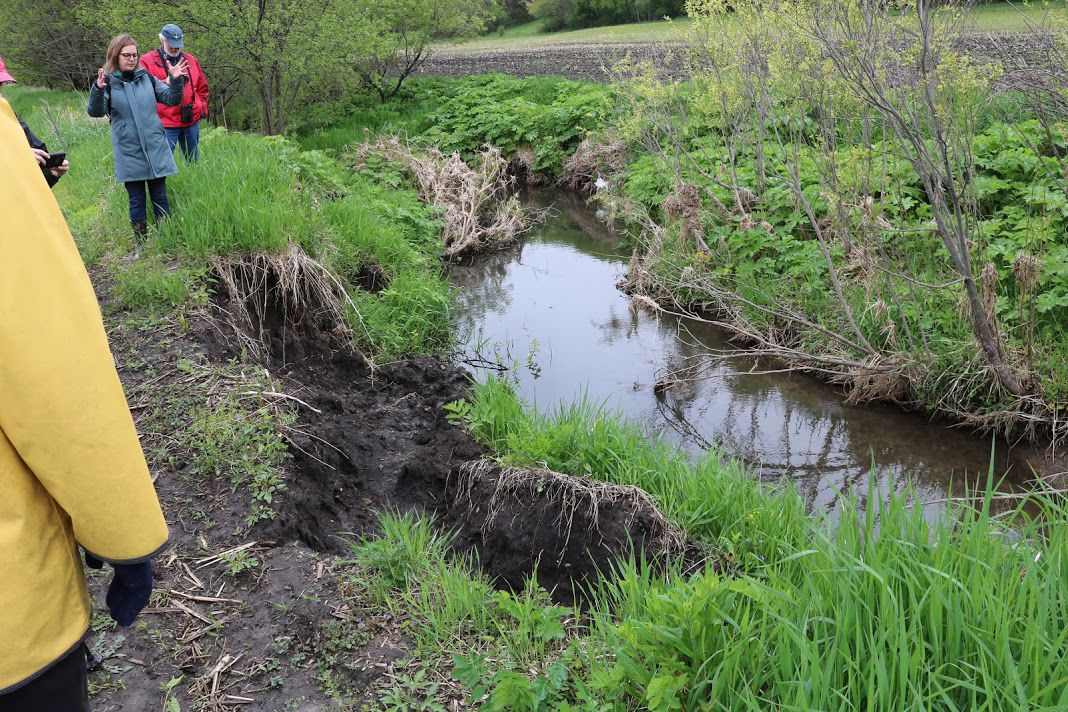 Stephanie Prellwitz, Executive Director of the Green Lake Association, and board members, visited the site before the restoration project began. A large portion of the bank, in the process of collapsing into Roy Creek on the Waldvogel’s property, demonstrated the urgent need for restoration and the personal safety concerns. 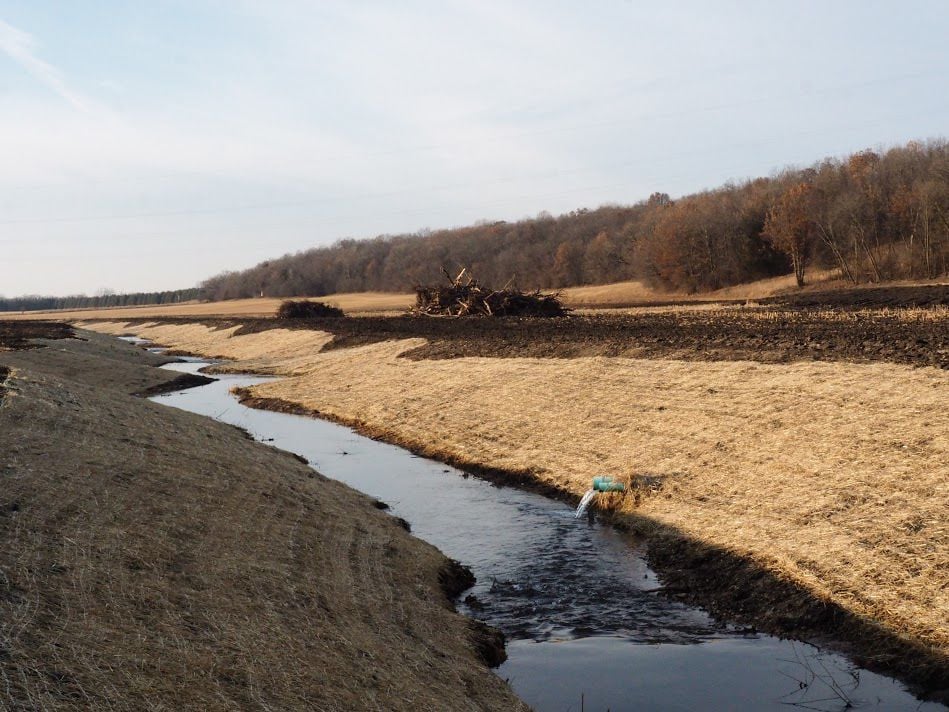 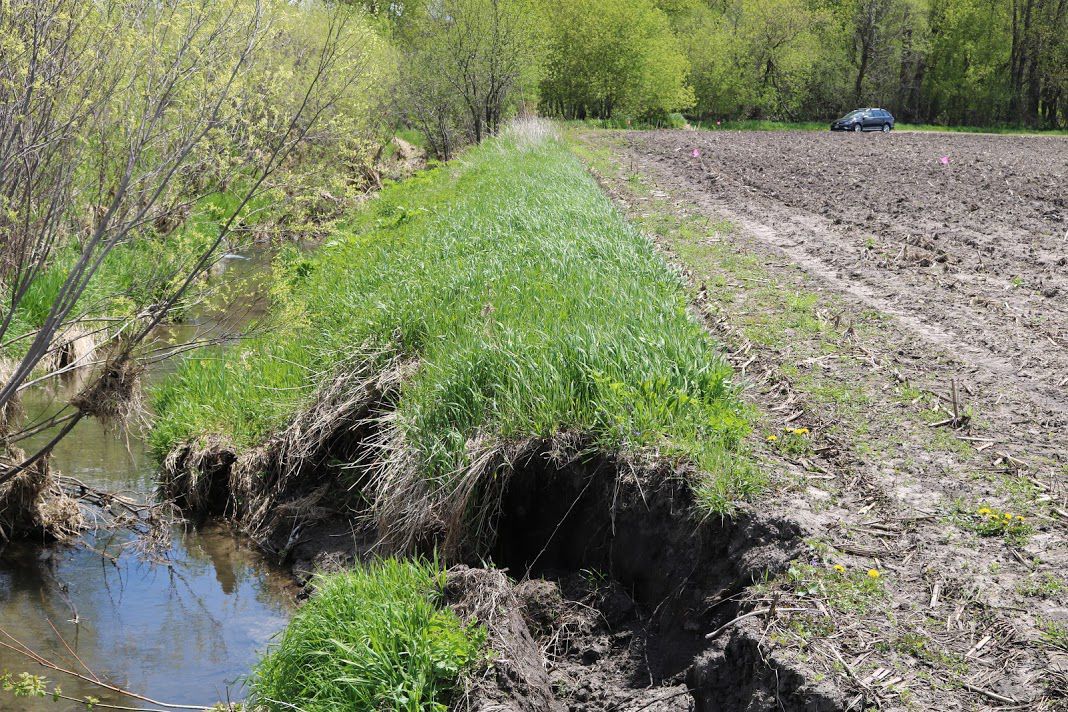 Eroded streambanks can be seen caving into Roy Creek along the edge of the farm field on the Waldvogel’s property. This is bad for stream and lake health, and is potentially dangerous for farm equipment operators.

Stephanie Prellwitz, Executive Director of the Green Lake Association, and board members, visited the site before the restoration project began. A large portion of the bank, in the process of collapsing into Roy Creek on the Waldvogel’s property, demonstrated the urgent need for restoration and the personal safety concerns.

Eroded streambanks can be seen caving into Roy Creek along the edge of the farm field on the Waldvogel’s property. This is bad for stream and lake health, and is potentially dangerous for farm equipment operators.

Of the eight named streams that flow towards Green Lake, the Green Lake Association estimates that more than 11 miles of them are in urgent need of repair. Eroding streambanks send nutrient pollution downstream and hurt water quality in Green Lake, but they can also pose a real threat to human safety. This was the case at the Waldvogel’s farm, the site of a major stream restoration project in 2019.

Along the edge of the Waldvogel’s property, where it meets Roy Creek, nearly 3,000 feet of streambank have been transformed. Where the land adjacent the creek once had steep eroding banks and cracked chunks of land ready to cave-in to the stream below, there are now gently sloping banks with meandering curves.

This restoration project not only protects water quality, but it also helps keep people on the farm safer, too.

“(Stream) banks were starting collapse, and we were scared of equipment tipping over into the creek,” said Dave Waldvogel. “If you haven’t been in a field for a couple of months, you may not be able to see that the bank has washed out, and then over you could go,” when driving equipment near the stream bank.

Their property along Roy Creek has been affected by recent bad weather, including the major 2008 flood and rapid snow melting event in the spring of 2019.

“In 2008, this whole field looked like a river. This past spring — when the thaw came so fast and then it rained — it washed out more of the banks, and even created some big holes within the stream itself,” Dave said. “Every year we would lose topsoil. Sometimes, during heavy rainstorms, the creek would get so full it would flood over the banks and start taking the field with it.”

The Waldvogels’ overall feeling about the project is optimistic, especially after seeing the yearly damage to the creek and their fields.

“Hopefully, now if we do get a bad storm or flood again, the water will be able to stay in the stream,” Becky said. “This work is important because, with the increase rain we’ve been seeing over the years, we need to be ready.”

Jason Pollesch, owner of Pollesch Excavating who completed the work, noted that it has been interesting to compare the Waldvogel’s improved stream, to areas left unrepaired farther upstream. Now during rainstorms, the new gently sloping banks on the Waldvogel’s property remained unaffected by the rain while areas with steep, vertical banks still erode during rainstorms. This is because the power of the additional runoff cannot temporarily expand into the nearby floodplain, so it instead eats away at the stream bank.

“It proves that this type of project works. The sloped banks and gentle curves give the water a place to go,” said Pollesch.

The Green Lake Association was one of the project’s funding sources. Thanks to their Project Clean Streams donors, they donated $10,000 toward completely underwriting the cost of this important stream restoration project.

“The funding was extremely important,” Becky said. “We’re 100% certain this project would not have happened without it. The whole agricultural economy is tough right now. There’s no money for extra projects like this.”

When asked if they would recommend this kind of work to others that have eroding creeks on their property, the answer was a resounding yes.

“There are a lot of programs available to help plan and fund these kind of projects. Everyone involved was very helpful and hands on, but a lot of people don’t know the kind of help that’s available,” Dave said.

The Waldvogels said they have more creek farther up the valley that they plan to look into having restored, too.

“We’re the temporary caretakers of the land,” Becky said. “If we don’t do this important work, who will?”

For more information about stream restoration work, contact the Green Lake Association at 920-294-6480 or info@greenlakeassocation.com.