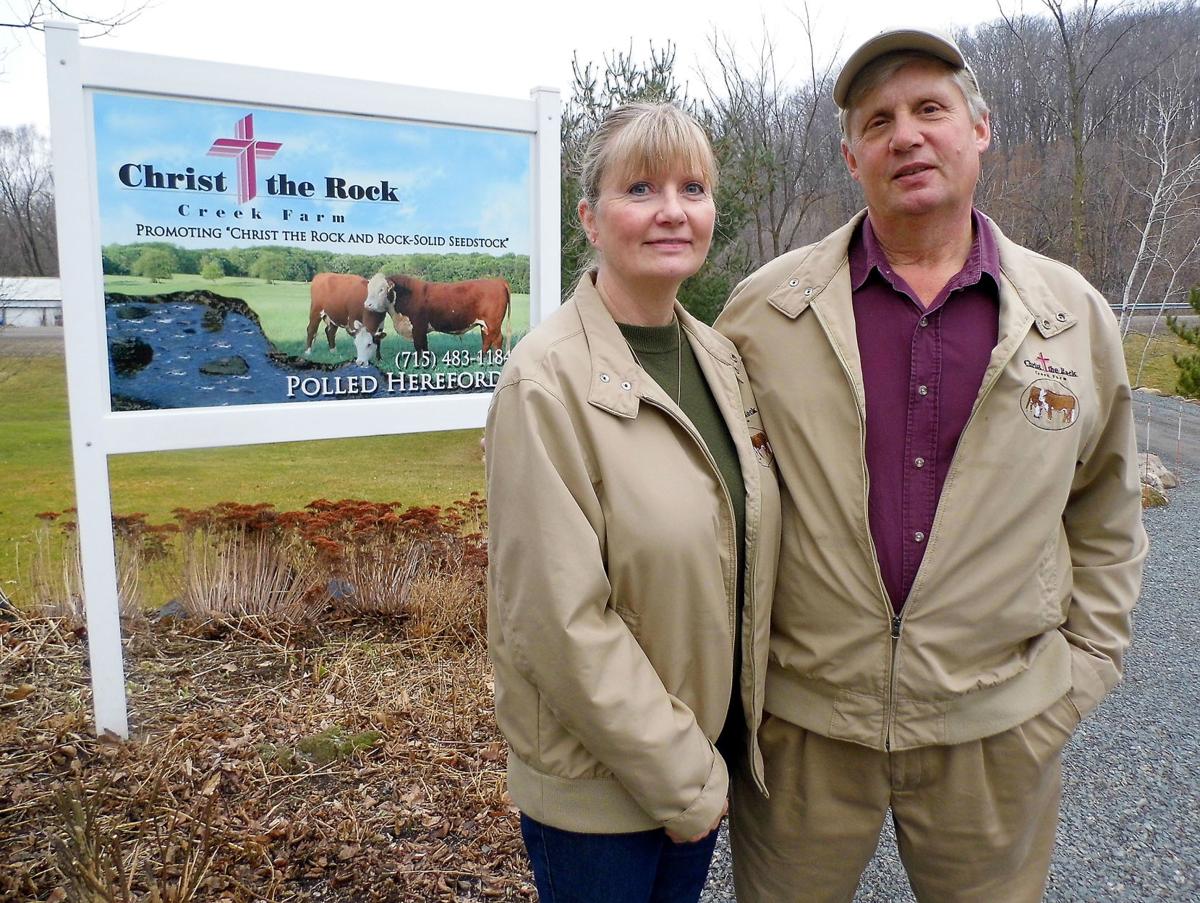 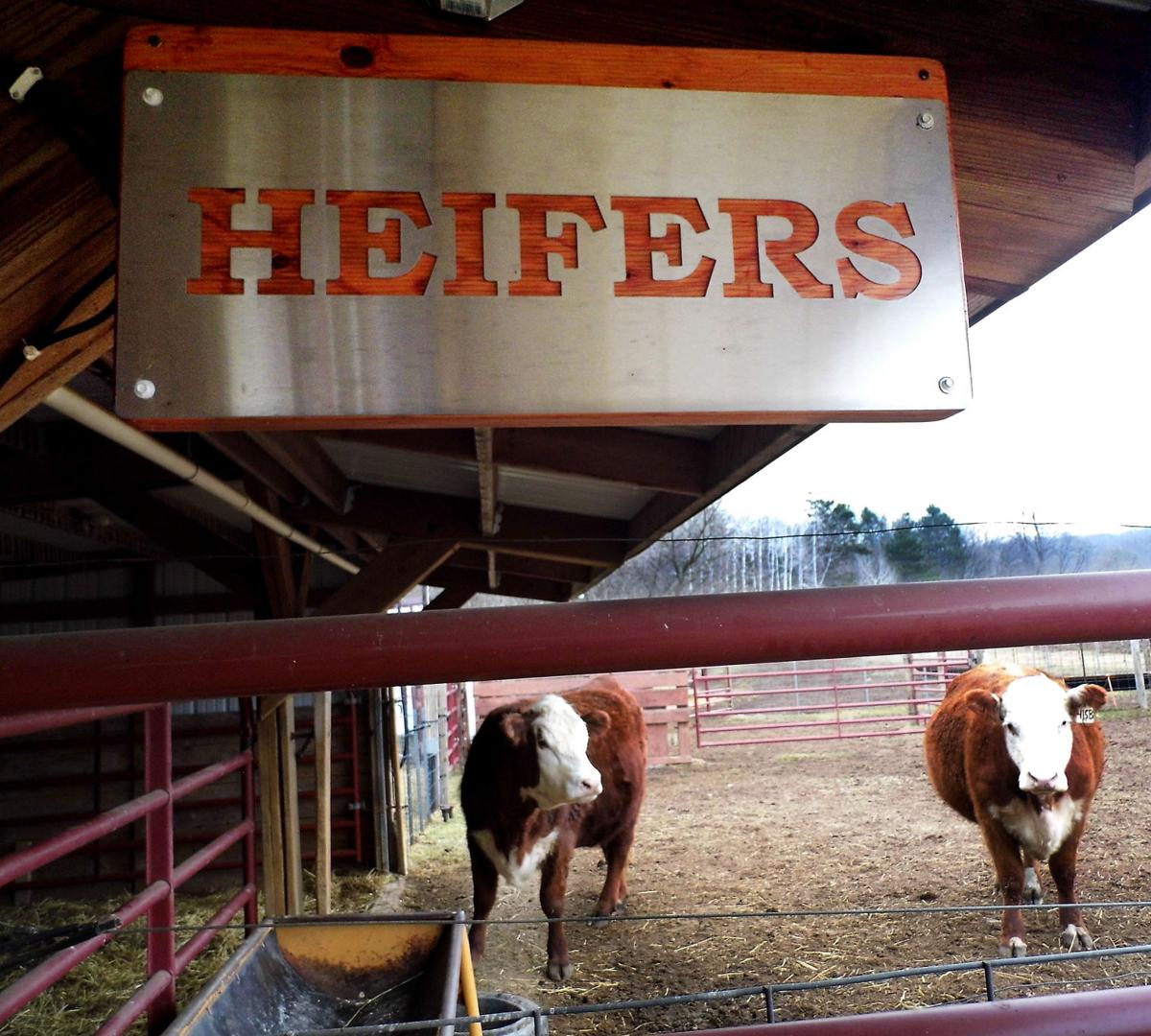 A sign designates heifer housing at the Schoen farm. 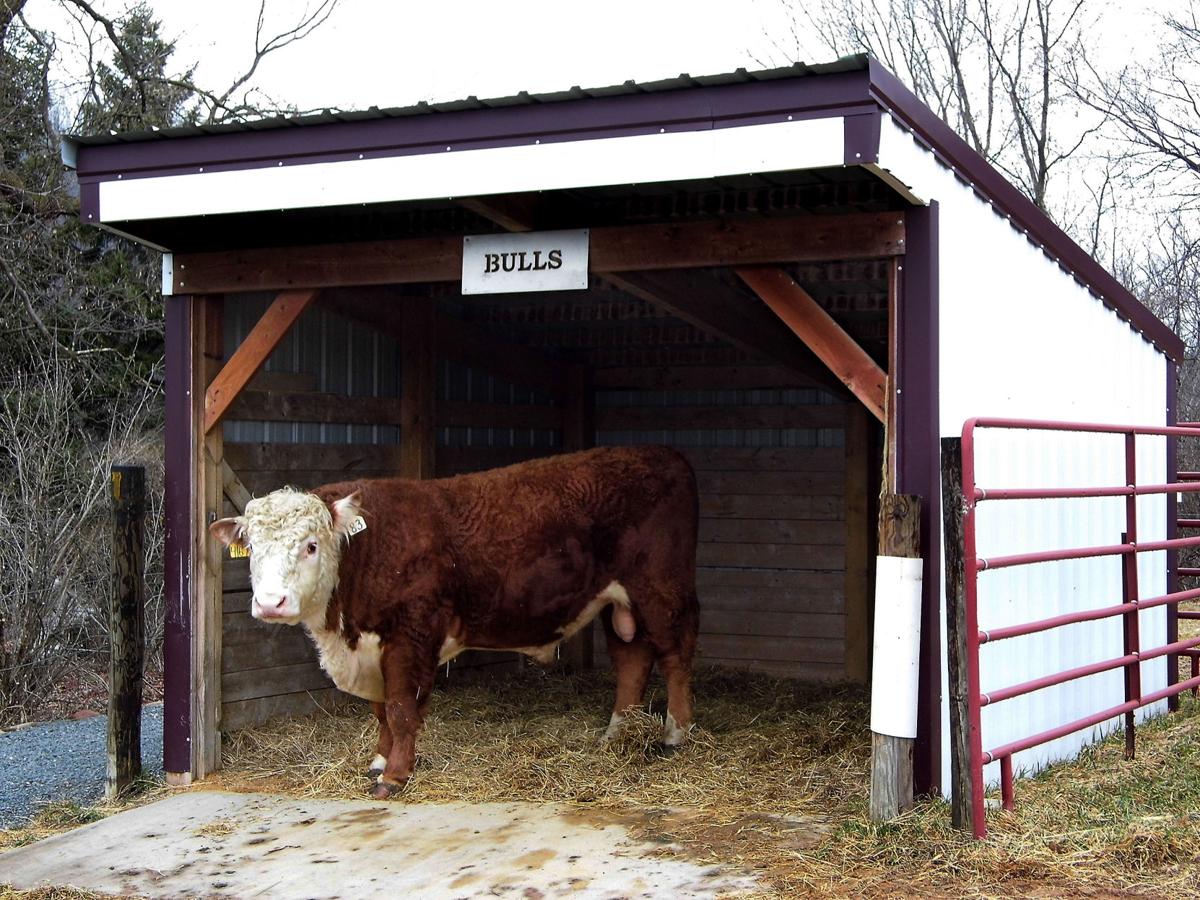 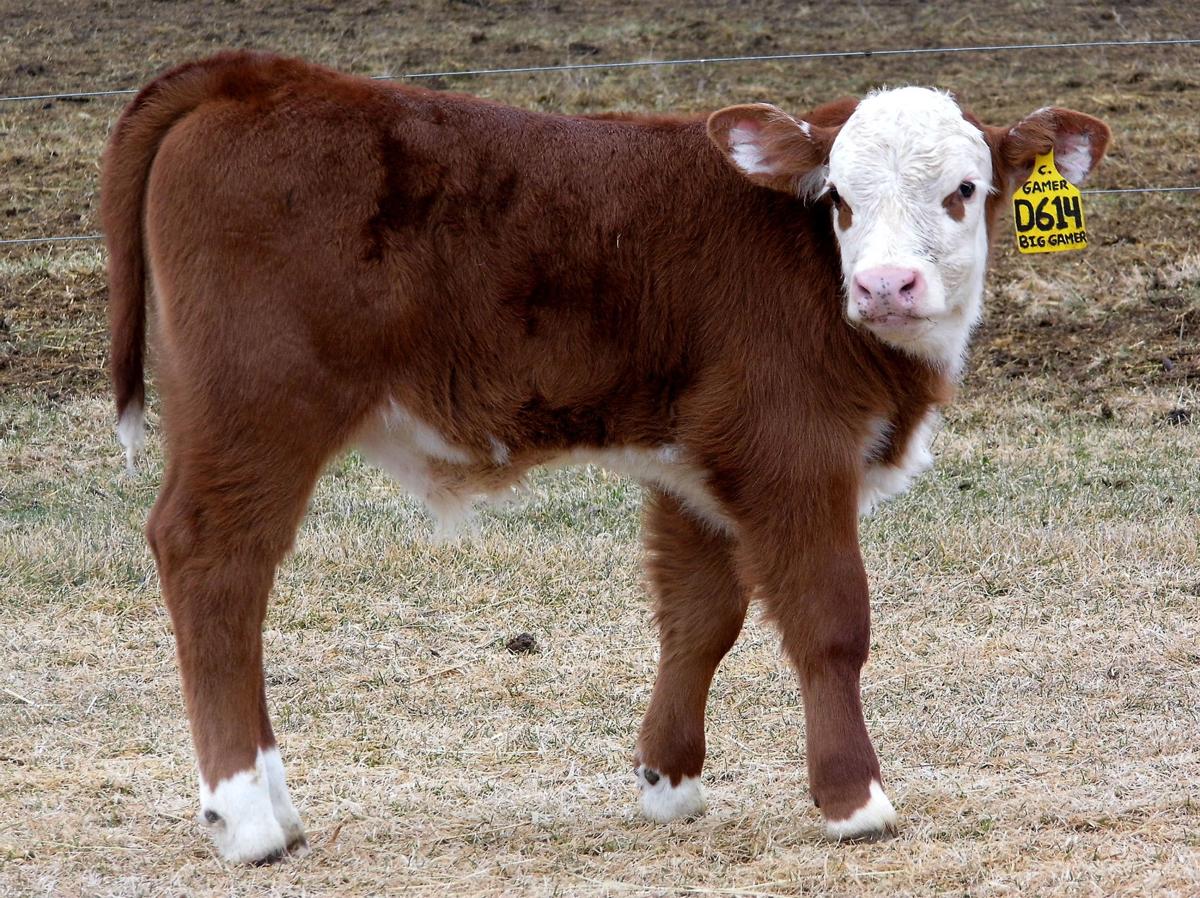 Striving for genetic improvement, the Schoens say this year’s calf crop is their best so far. This young bull, Big Gamer, is a son of their new herd bull. 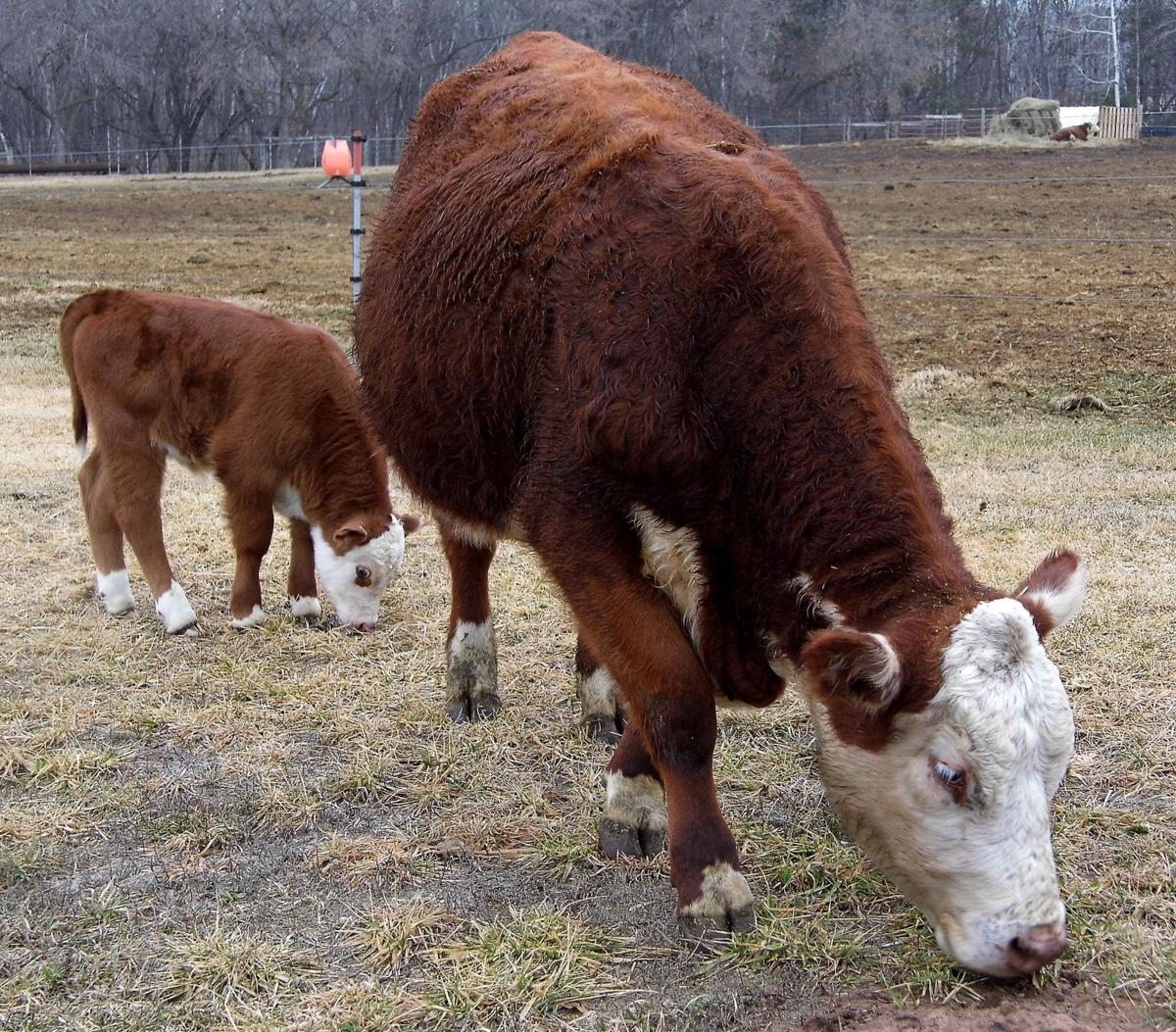 A Hereford cow and calf enjoyed some early-spring grazing at Christ the Rock Herefords. 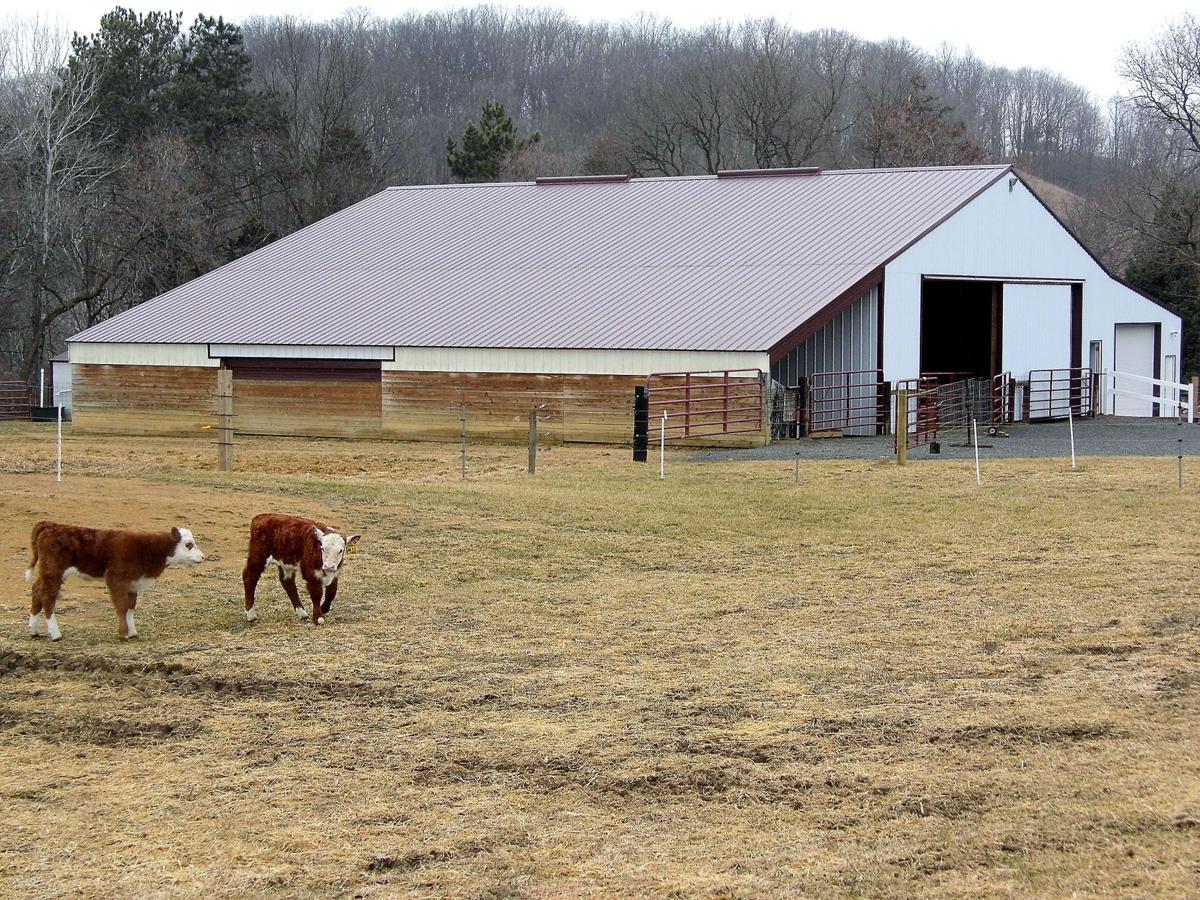 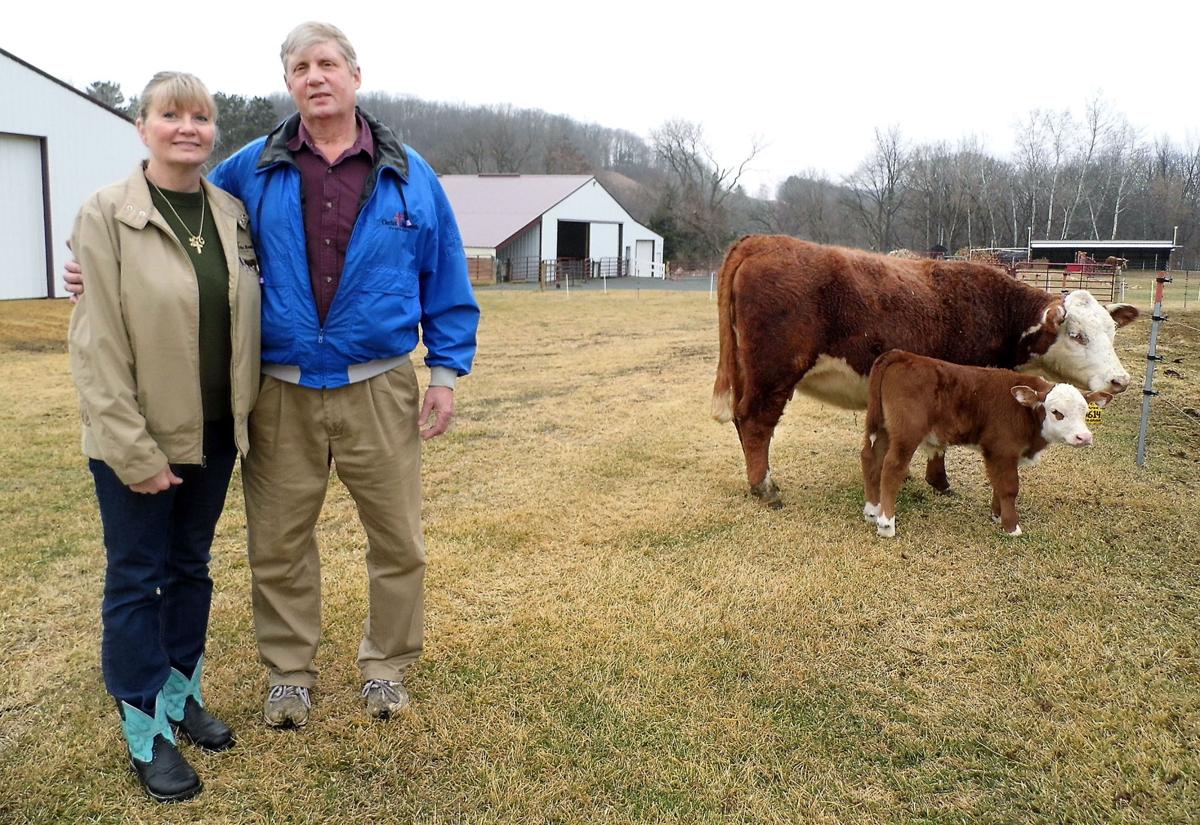 A sign designates heifer housing at the Schoen farm.

Striving for genetic improvement, the Schoens say this year’s calf crop is their best so far. This young bull, Big Gamer, is a son of their new herd bull.

A Hereford cow and calf enjoyed some early-spring grazing at Christ the Rock Herefords.

ST. CROIX FALLS — Whether he’s in the pulpit or in the pasture, Rev. Mark Schoen is equally at ease and equally proficient.

The pastor at Shepherd of the Valley Lutheran Church in St. Croix Falls tends, with great care, to both his flock of some 250 members and his herd of Herefords just north of town.

Faith is at the heart of Christ the Rock Herefords, which Mark owns with his wife, Deb. Through their farm, the Schoens use every opportunity to witness to others, from the red Lutheran Church-Missouri Synod logo on their farm sign to the Bible verse (John 3:16) on the back of their business card.

The Schoens’ neat-as-a-pin 68-acre farmstead set along Big Rock Creek is home to about 20 purebred Hereford cow-calf pairs. For Mark, it’s the fulfillment of a boyhood dream.

“Now, he has come full circle,” Deb said. “He started out farming and now, he is able to serve the Lord plus raise the cattle that we love. That is why our farm promotes our Lord and our Lutheran church and our cattle. It is something that we love to do together.”

“Whatever we do, we do all to the glory of God,” added Mark, a farm boy at heart, who admits, “I couldn’t hack living in town.”

While there’s no doubt that he was destined for the ministry, Mark’s first career choice out of high school was agriculture and, more specifically, working with livestock.

Growing up near Chaska, Minn., he raised ducks, pigs, rabbits and Jersey cattle and earned his own small dairy herd while working on a local farm. In 4-H, he helped friends show their Hereford cattle, developing an affection for the breed.

After graduating from Mayer Lutheran High School, he took classes at Normandale Community College with plans to transfer after two years to the University of Minnesota to study animal science, perhaps going on to be a veterinarian.

Just married, he and Deb, had barely gotten settled into U of M farm campus housing the summer before classes began when he began to wonder if he should be a pastor.

Mark enrolled at Concordia University, then attended Concordia Theological Seminary in Fort Wayne, Ind. While there, he worked and lived on a 300-acre farm.

His first call was to a church in Michigan, then he spent four years in Minnesota before moving to St. Croix Falls in 1991 to plant a new church, starting with a dozen people.

After several years living in town, the Schoens bought their farm in 2001, remodeling the house, adding on and buying their first five Hereford cows from Spring Valley breeder Fred Larson.

The lack of outbuildings on the property was a blessing, Mark said, as they could add what made the most sense for them. They started with a 12-by-12-foot barn and a couple of small sheds on movable skids.

Since then, they have built a handling facility for breeding, vaccination and calving; a shop, where they keep their John Deere tractors; and a hay storage barn.

Everything is in its place, and the couple tackles a new farm improvement project every year.

“When you sell your cattle, you’re selling where they come from, too,” Deb said.

‘The cattle on a thousand hills are Mine … ’

With a focus on selling quality seedstock, mostly by private treaty in the fall, the Schoens are on a constant quest to make their herd better.

“We have tried to focus on improving our genetics to the best of our ability,” Deb said.

In their experience, it’s worth it to invest in good cattle. They have attended national sales and gone as far as Montana to purchase a clean-up bull. They use top bulls in their artificial insemination program and, in an effort to more rapidly improve the foundation of their herd, buy embryos.

They’ve come to enjoy playing the numbers games, with a focus on Expected Progeny Difference, calving ease, milk production, ribeye and marbling. They strive to breed “clean-fronted” animals with square top lines that grow into moderately sized mature animals that don’t require a lot of feed to yield and nurture a healthy calf.

“Some people just focus on EPDs,” Mark said, “but we like to also have good-looking cattle. We like the best of both worlds.”

While the Hereford breed sometimes gets a bad rap and is overshadowed by the Angus breed, the Schoens say it’s come a long way in recent years, especially with regard to marbling and ribeye. Realizing the importance of getting colostrum into a calf in the first 36 hours of life, more attention also is being paid to cow teat and udder size.

In fact, many Angus breeders now cross with Hereford, reaping the benefits of the red breed and hybrid vigor along with the usually higher price paid for black cattle.

This calving season, from January to March, brought the Schoens’ best calf crop to date. Most cows calve in the comfort of the barn and remain there a couple of days.

Faithful caretakers, the Schoens have cameras installed in the barn and can watch cows as they calve from a monitor in their living room. A picture window there looks out upon a hillside wooden cross and feeding cattle.

The herd is rotationally grazed, with supplemented hay in the winter. The Schoens raise about a third of their own hay and bring in big square bales from a grower in Elk River, Minn. Only yearlings and calves get grain.

“We want them to be easy keepers,” Mark said.

As Deb begins to cut back on her off-farm work as a dental hygienist, the Schoens say they hope to build the herd up to about 30 cows.

“I would prefer to be here,” she said.

When Mark is away on church business, Deb often handles the chores. She also halter-breaks animals for ease of handling and crafts “genuine Hereford soap” from the tallow after butchering.

For the Schoens, farming isn’t so much work as it is “therapy.” It’s also a way to grow closer to God as, according to their farm motto, they promote “Christ the Rock and Rock-Solid Seedstock.”

For more information about Christ the Rock Herefords, visit www.ctrherefords.com or call 715-483-1184.

The 2016 Indianhead Polled Hereford annual sale will be Saturday, April 9, at the UW-River Falls Mann Valley Farm. Animal preview starts at 10:30 a.m., with the sale at noon.