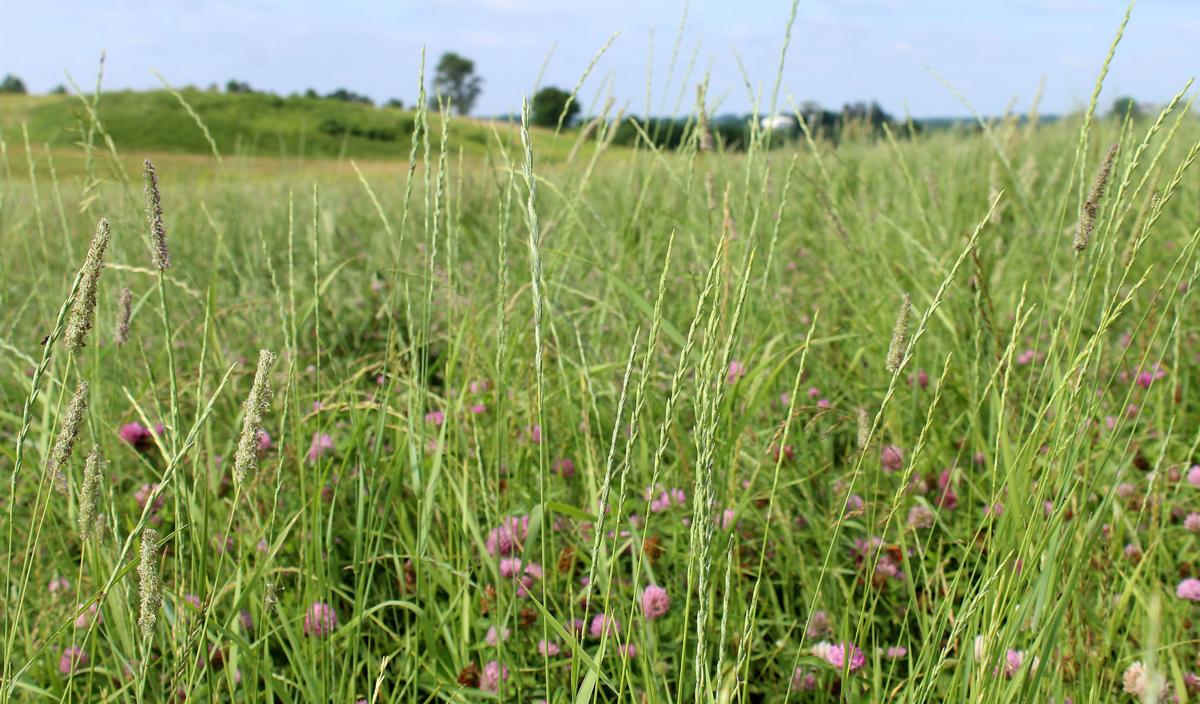 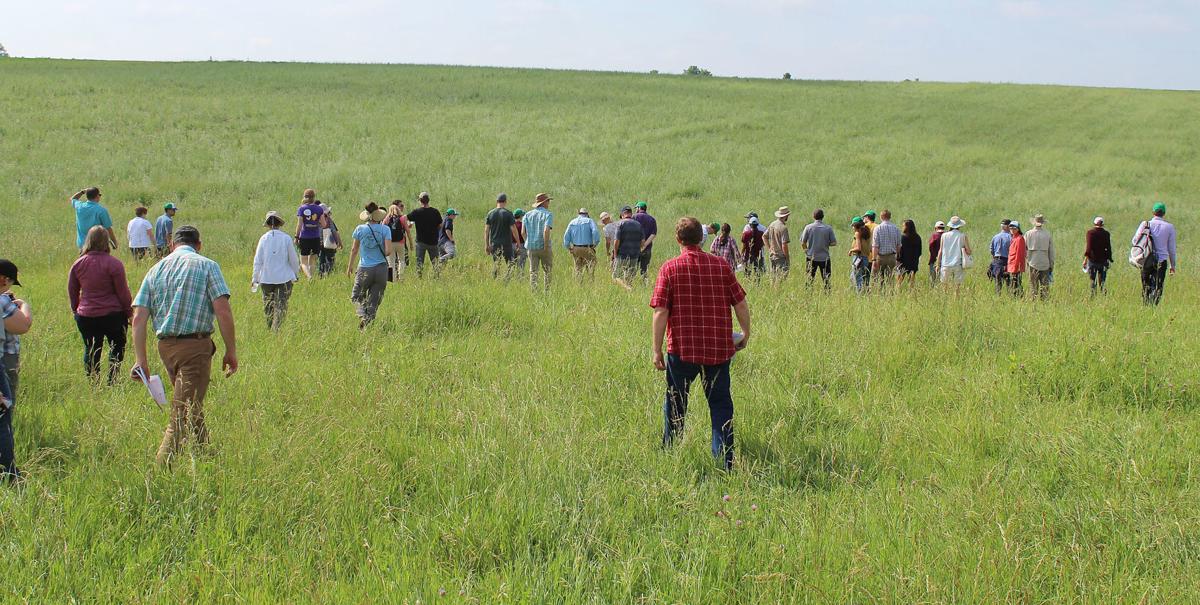 Attendees of the fourth annual International Kernza Conference hopped off several wagons to walk into what is believed to be the first perennial grain polyculture commercial field in the world at the farm of John and Dorothy Priske, Fall River. 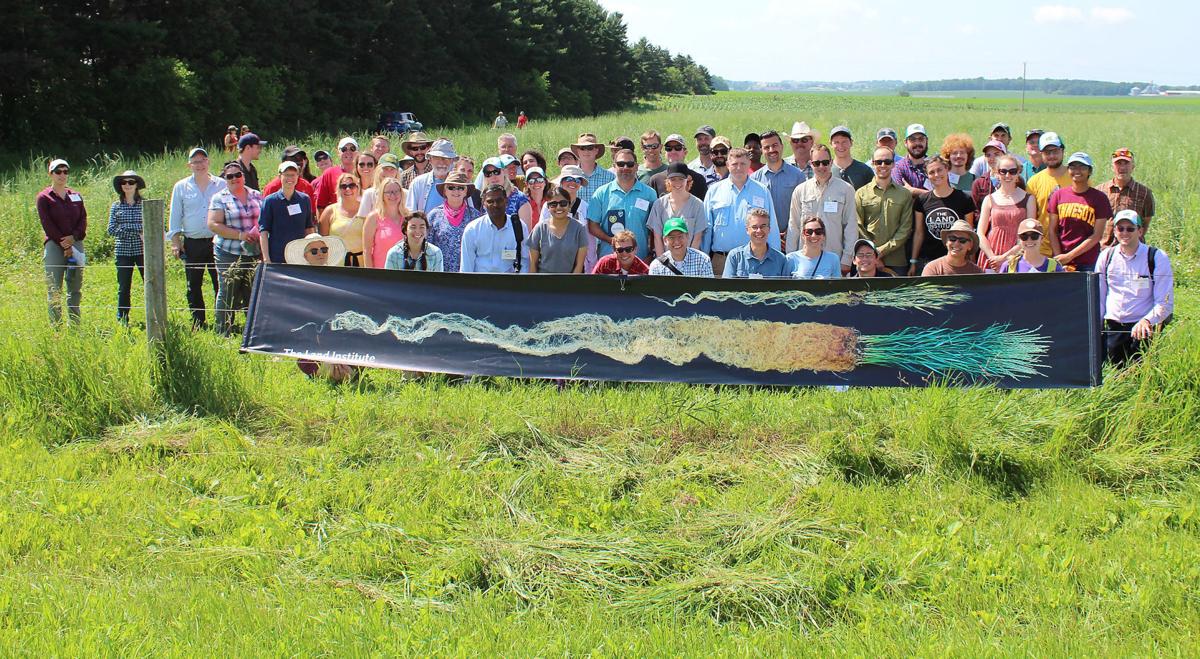 Kernza is known for its deep roots, as depicted in this banner proudly displayed near some of the plots at the UW Arlington Agricultural Research Station. Attendees of the conference paused for a group photo by this banner during the field day last week. 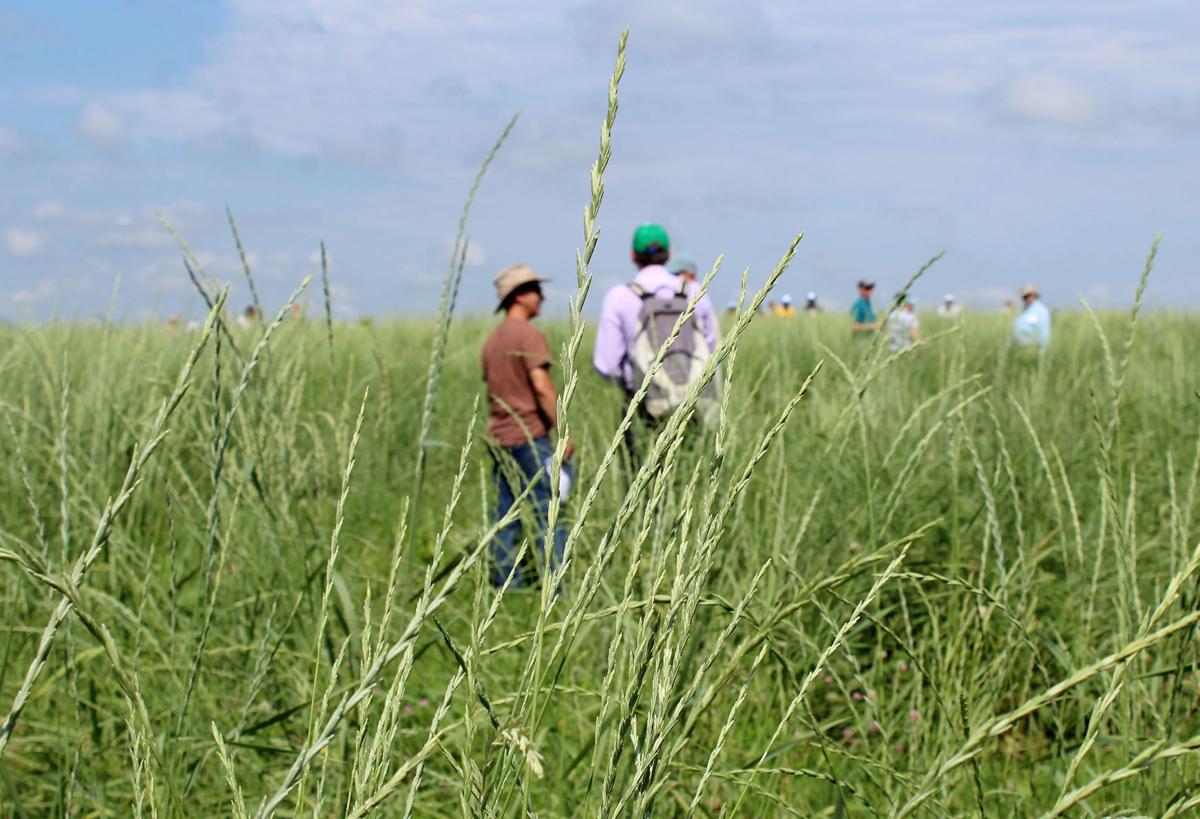 Several experiments are underway at the UW Arlington Agricultural Research Station in regards to kernza, including polyculture and intercropping experiments.

Attendees of the fourth annual International Kernza Conference hopped off several wagons to walk into what is believed to be the first perennial grain polyculture commercial field in the world at the farm of John and Dorothy Priske, Fall River.

Kernza is known for its deep roots, as depicted in this banner proudly displayed near some of the plots at the UW Arlington Agricultural Research Station. Attendees of the conference paused for a group photo by this banner during the field day last week.

Several experiments are underway at the UW Arlington Agricultural Research Station in regards to kernza, including polyculture and intercropping experiments.

MADISON — When Valentin Picasso, an assistant professor in UW-Madison’s agronomy department; Julie Olmstead, a program officer at The McKnight Foundation; and Fred Iutzi, president of The Land Institute, were all working in the lab together at Iowa State University many years ago, they often wondered if there would be a perennial grain developed in the future. It seemed like a radical idea then, one that was considered “on the fringe,” but the trio was hopeful someone would plant the seeds for what would come later.

“I’m so struck by the amount of young people here who are now interested and it’s not such a radical idea anymore,” Olmstead said at the conclusion of the fourth annual International Kernza Conference, held last week in Madison. “I have incredible hope and faith we’ll get where we’ve always wanted to go.”

About 100 people attended the two-day conference that focused on research, particularly genetics, ecosystem services and agronomic management of the new perennial grain, along with tours of plots and fields where the crop is now growing in central Wisconsin.

Attendees first visited Fountain Prairie Farms in Fall River, owned by John and Dorothy Priske. The Priskes have been growing kernza since 2017 through a partnership with UW-Madison; the Priskes’ field is believed to be the first perennial grain polyculture commercial field in the world, an organic kernza and red clover field used for production and cattle grazing efforts.

What attendees observed at Fountain Prairie Farms is not typical for what a kernza field looks like as most are in monoculture, Picasso said. However, researchers at the UW Arlington Agricultural Research Station are also studying polyculture and intercropping of kernza, and attendees were able to visit those research plots during the conference as well.

The Priskes, along with several other farmers from across the country who grow kernza, were included in a panel discussion about their experiences with the perennial grain. While The Land Institute, the entity that owns the trademark for Kernza, is interested in commercializing the grain, farmers still play an important role as research and data continues to be collected on it.

“Kernza won’t move forward without farmer participation,” said Aaron Reser of Green Lands Blue Waters, who also moderated the farmer panel. “You all are sticking your necks out and going to the forefront with this.”

Carmen Fernholz farms 500 acres of certified organic cropland in Madison, Minn., recalling when Dr. Don Wyse, a professor and plant geneticist at the University of Minnesota, told him in 2011 that he was working on an intermediate wheatgrass variety and asked if Fernholz would be interested in trying to grow a bit of it. He received enough seed to plant 2 acres that first year, and has been growing it in partnership with the university since then.

Erik Engellant is a farmer from Montana with about 4,000 acres to care for. In 2015, he moved back to the farm and began transitioning it to organic; he credits his brother for telling him about kernza, a grain he discovered after they enjoyed a beer with it as an ingredient.

He acquired seed and planted about 100 acres of kernza, also allowing his cattle to graze on the grain. He is seeing success with the crop and plans to continue to plant it.

“We’re very excited about it,” Engellant said. “It seems to meet the needs we have and the goals we want to achieve.

“It’s also fun for us young farmers to see something new like this and to see the potential,” he added.

Josh Svaty farms about 2,000 acres split between crops and livestock in a dry climate in Kansas. He planted about 27 acres of kernza in 2014, admitting that first year was a loss. However, the second year was a better year, followed by two more years of bad crops before being surprised in the fifth year of growing with a good crop again.

“It works well in my operation and fits my farming philosophy,” Svaty said.

He implements cattle into his system, adding that his cattle spend about 70 percent of their time hanging out in the kernza fields.

As attendees of the kernza conference, both Svaty and Engellant were interested to hear more about some of the research behind intercropping, which Svaty said he sees as an exciting opportunity.

However, when asked what they’d each do with $10 million for research, each farmer had different priorities depending on their use of the grain. While some would like to see research on disease resistance and yield, others were more interested in how to market the unique crop and engage end-users of the products made from kernza.

James Farag, managing director at Padagonia Provisions, an online food retailer based in California, shared how Padagonia has seen success after releasing a kernza beer three years ago. Padagonia now has two kernza beers available and plans to expand their beer program, along with two to three new food items featuring kernza. But Farag has run into problems sourcing the grain, which has led to putting the further development of kernza food items on the shelf for now.

Christina Skonberg, a senior sustainability analyst for General Mills, detailed how the company is focusing on sustainability in agriculture and promoting regenerative agriculture through a new initiative announced in March. General Mills also has interests in developing kernza products, including a commercially available kernza cereal, although like Farag, is finding that sourcing of the grain has been a challenge.

She is excited to see other companies on board with kernza, and she feels efforts have been pretty collaborative so far instead of competitive when it comes to developing kernza products in these early stages. Both she and Farag are interested in working together to get kernza more well-known and to a point where there is a good supply assurance of kernza grain.

Staff at The Land Institute are working on several pieces of the kernza puzzle, including the breeding and development of techniques for successfully growing the crop, particularly on a larger scale. Although the grain has made its way into the commercial supply chain in small niche markets, their goal is to commercialize the grain — an effort already underway by The Land Institute.

But when looking back at the commercialization of wheat, which took hundreds of years of evolution, kernza advocates admit there is still quite a way to go.

“If your life’s work can be accomplished in your lifetime, you’re not thinking big enough,” Tessa Peters, commercialization manager at The Land Institute said, referencing a quote by the Institute’s founder Wes Jackson.

Part of Peters’ job is to work on building kernza.com as a resource for those with interests in growing and marketing the perennial grain. Within the next six months, the Institute has planned to update the website with more information and knowledge, including licensing agreements for growing kernza. They also aim to create a Kernza Consortium to connect kernza growers across the world.