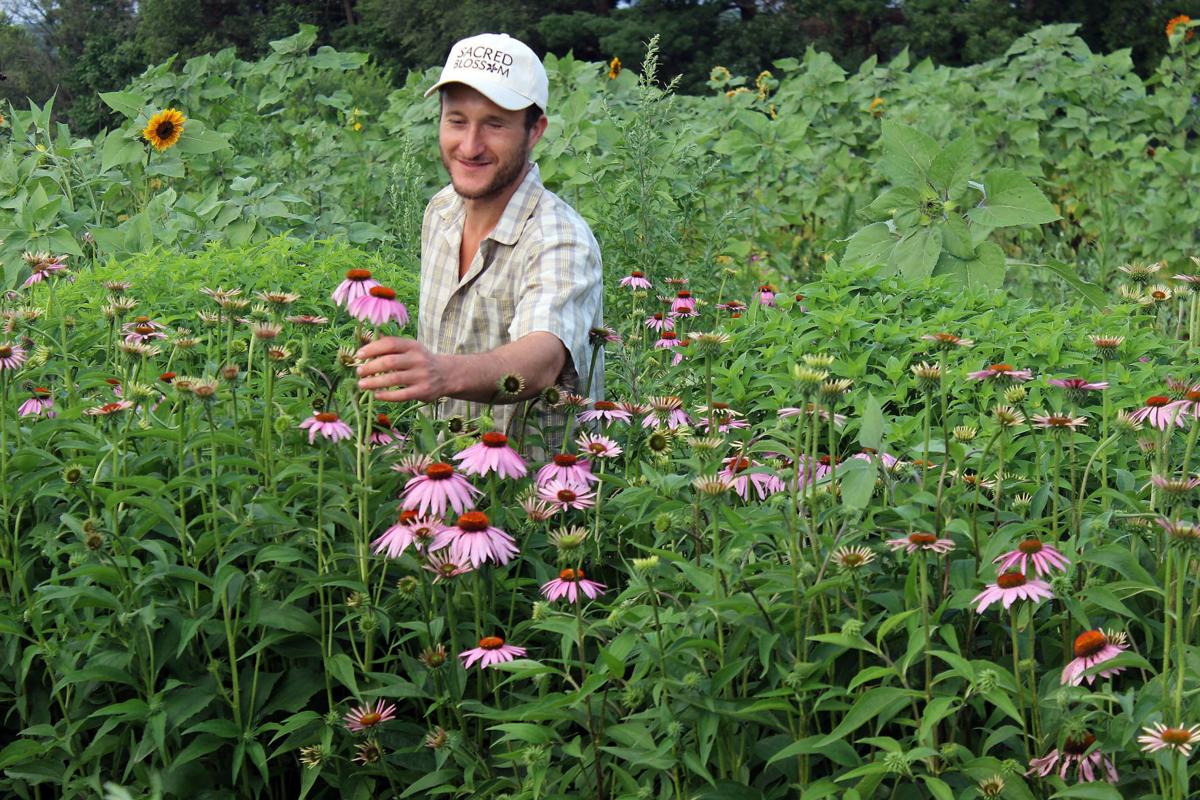 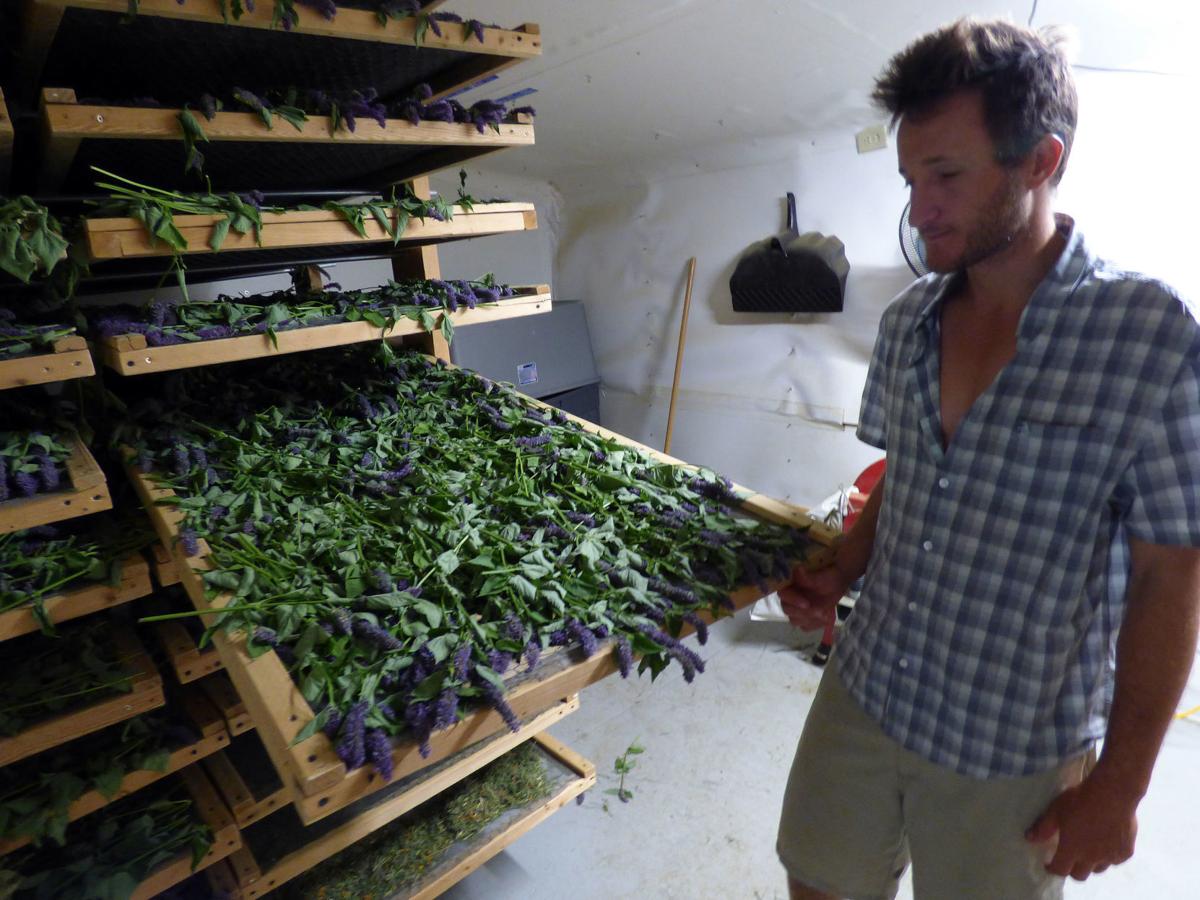 DiMaggio said his herb-drying building, which he said is the largest for diversified herb production in the Midwest, allows him to harvest and dry herbs more slowly than other drying options would allow. 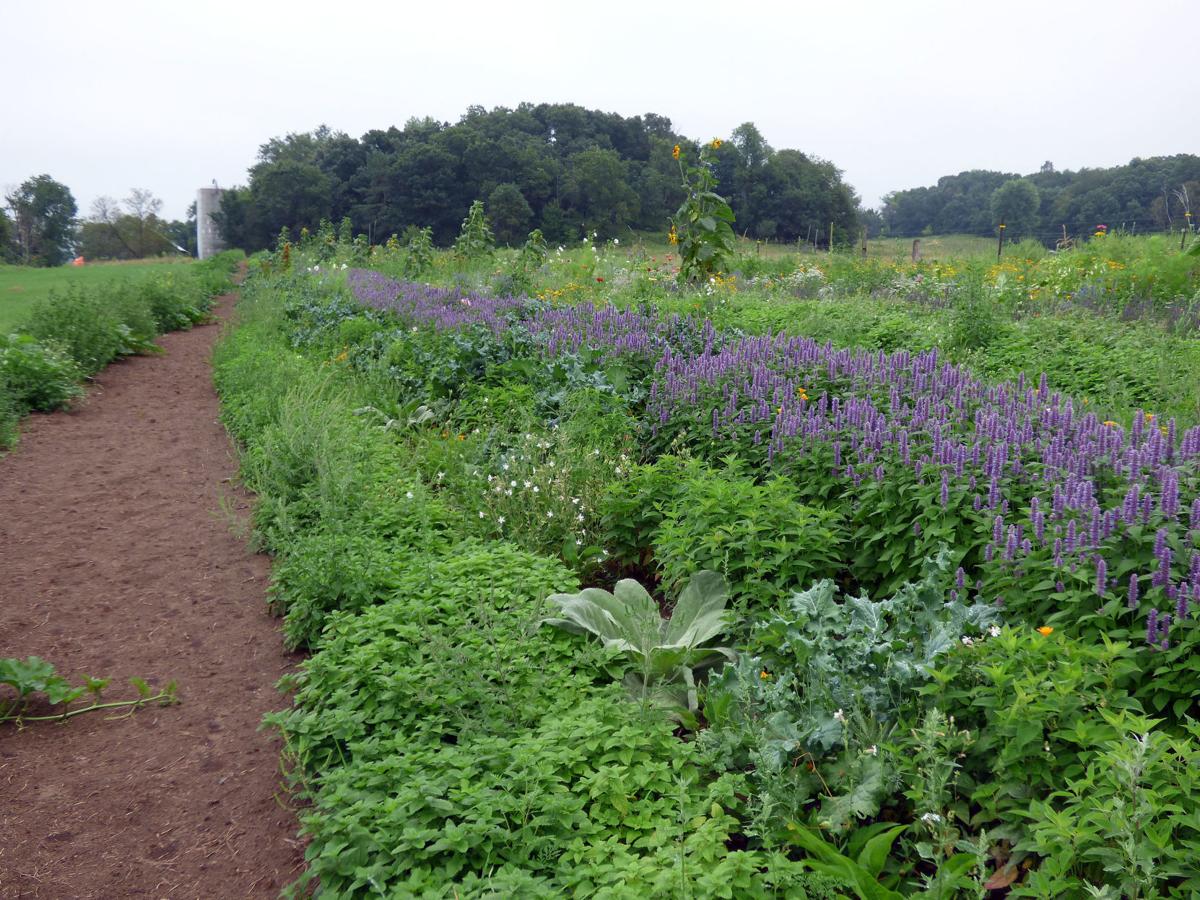 DiMaggio said growing Sacred Blossom’s herbs tightly packed together in dense polycultures has benefits for both the soil and the plants. 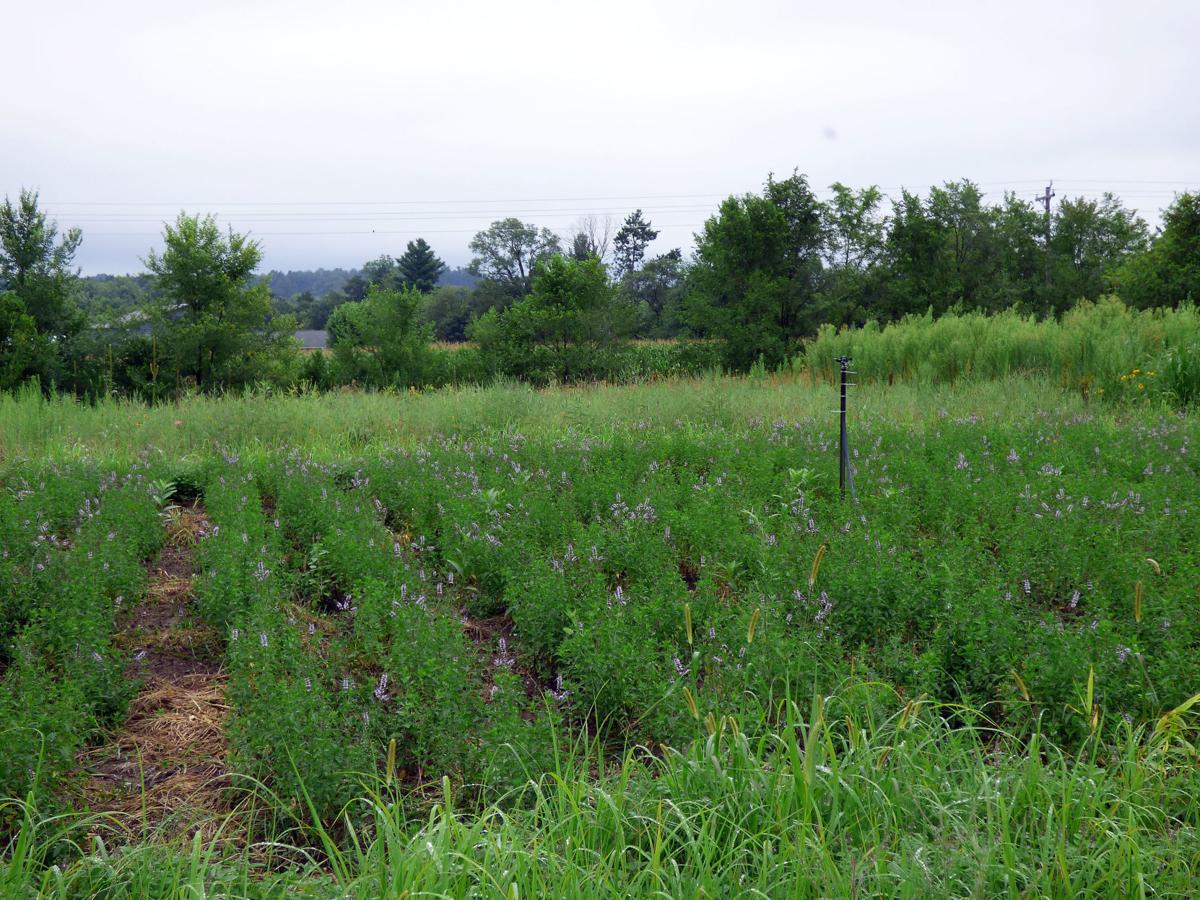 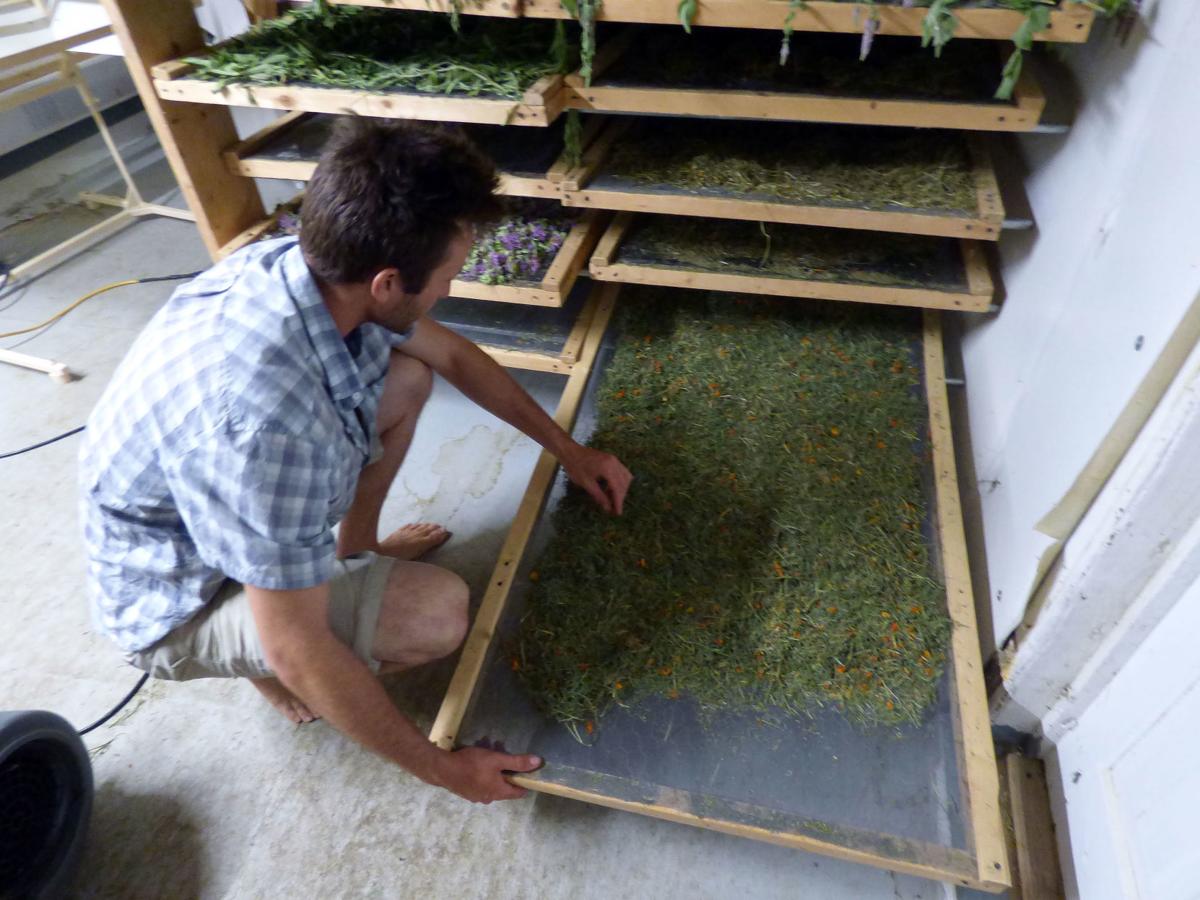 Tony DiMaggio checked on the drying progress of a harvest of California poppies, the main ingredient in his Dream tea. 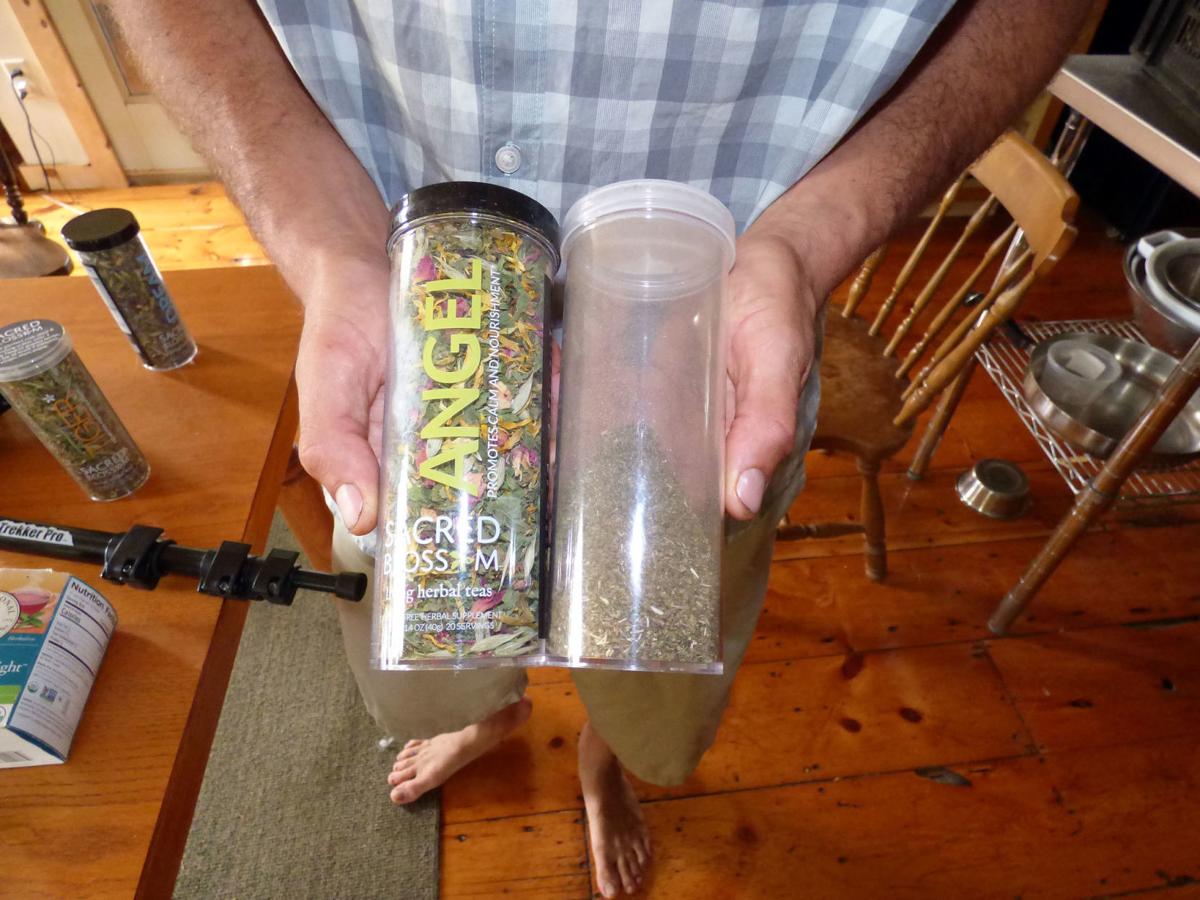 Sacred Blossom farmer Tony DiMaggio said using herbs he has grown himself allows his teas to stand out from the larger producers. 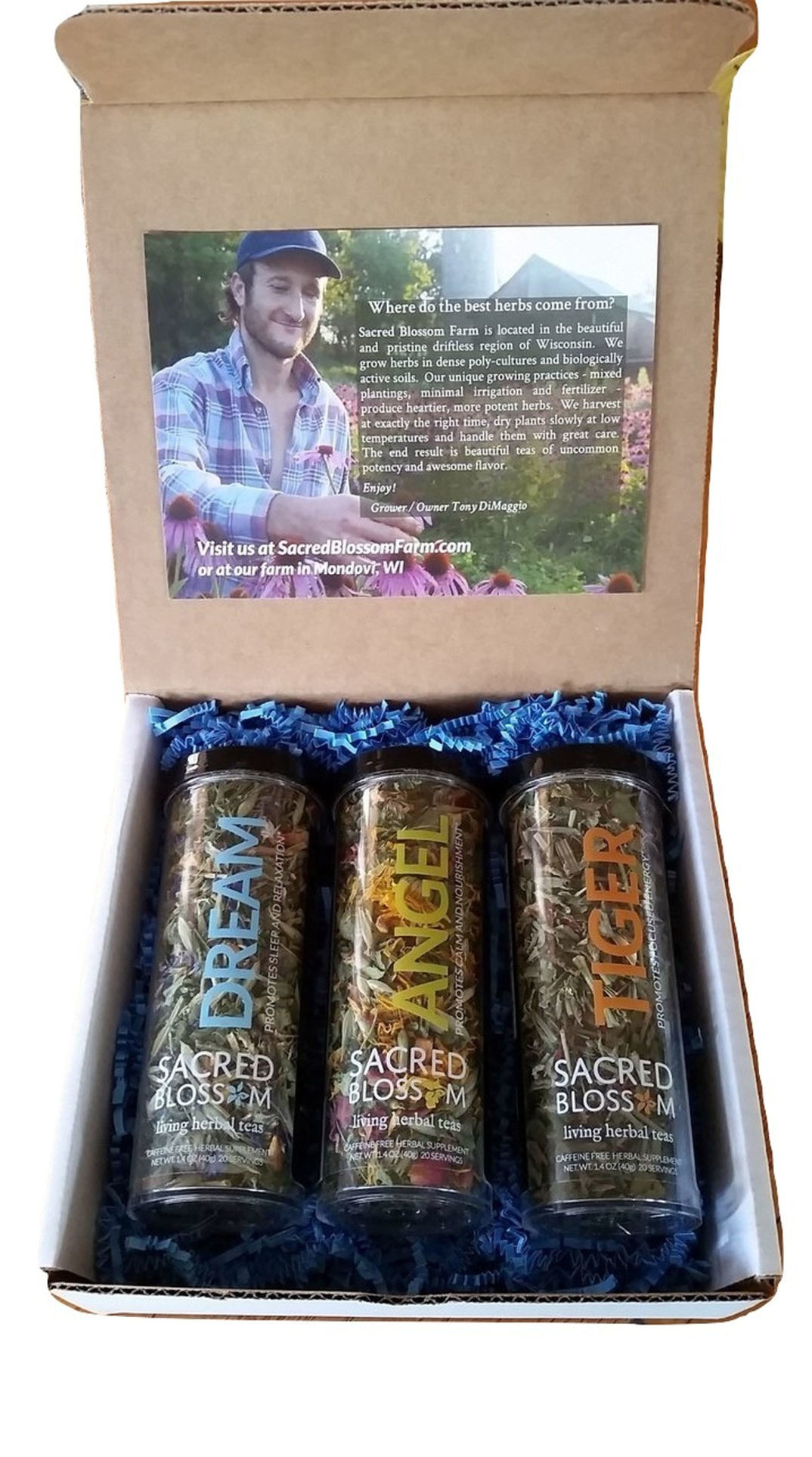 Sacred Blossom is offering three varieties of herbal tea in 2019.

DiMaggio said his herb-drying building, which he said is the largest for diversified herb production in the Midwest, allows him to harvest and dry herbs more slowly than other drying options would allow.

DiMaggio said growing Sacred Blossom’s herbs tightly packed together in dense polycultures has benefits for both the soil and the plants.

Tony DiMaggio checked on the drying progress of a harvest of California poppies, the main ingredient in his Dream tea.

Sacred Blossom farmer Tony DiMaggio said using herbs he has grown himself allows his teas to stand out from the larger producers.

Sacred Blossom is offering three varieties of herbal tea in 2019.

GILMANTON — It may have been by accident that Tony DiMaggio got into farming, but it was no mistake.

DiMaggio, who is in his fourth year growing herbs that he turns into tea at Sacred Blossom Herb Farm in Buffalo County, said it was after some time spent “bumming around the world” that he found farming and figured out how he wanted to dedicate himself.

“I fell into farming by accident one summer,” DiMaggio said. “I was working all sorts of odd jobs, and one of the jobs I fell into was with Natura Farms in Minnesota. I kept going back every year because I was learning so much.”

DiMaggio was born in California, grew up in Costa Rica and went to university in Buenos Aires, Argentina. Since then, he has run a beach bar and started a horse tour company in Uruguay, worked on a reforestation project on property owned by Shania Twain in New Zealand, and helped start an eco-lodge in Vietnam.

His career in agriculture started as a summer job which turned into a six-year apprenticeship under master berry-grower Paul Otten at Natura Farms in Minnesota.

“Paul was a real student of soil health and human health and where those two things come together,” DiMaggio said. “I loved what we did and decided I wanted to make a career of it. I kept coming back year after year because there was so much learning, and I find it endlessly interesting.”

DiMaggio knew he couldn’t make as much money as he needed to growing small-scale vegetables, so he spent 18 months visiting more than a dozen farms around North and Central America studying some different specialty crops like hops, wine grapes and marijuana, truffles, apples, avocados, mangoes and more. He decided to focus on medicinal herbs and went to southern Oregon, this country’s herb production capital, where he got a job as the only legal worker on a crew of 12 on a large production herb farm, he said.

“I learned the ins and outs of an industrial-scale herb farm,” DiMaggio said. “I figured out I needed to have a value-added product if I was going to be really small scale, so I looked at the tea industry. When you rip open a tea bag, there’s nothing in it. I thought, ‘I can do so much better than that.’”

So in 2016 DiMaggio started his own operation on a former Amish farm in Mondovi.

“My passion is farming for health; my health, your health and the health of the planet,” DiMaggio said. “Herbs fit in really well with that because, first of all, they are some of the most medicinally healthy things you can eat, and second of all, they are just leaves I’m growing, basically. It doesn’t require the fertility you’d need for 200 bushels of corn. These do well in our native soils.”

Last year, DiMaggio produced about 2,000 pounds of dried herbs on Sacred Blossom Herb Farm. This year, he is likely to produce about 3,000 pounds, and would like to bring production up to about 8,000 pounds, he said.

DiMaggio has four acres in herbs on Sacred Blossom this year, and his acreage in herbs has grown every year on the farm.

Among the dozens of herbs DiMaggio has growing at Sacred Blossom are black currants, several varieties of spearmint and peppermint, California poppies, echinacea, nettles, stevia, tulsi, lemongrass, elderberries, hyssop, sage, and milky oats. He is expanding with a field of elderberries and has plans to use the rows between the elderberries for his main new herb production area next year.

“Everything I do here is all tailored to allow me to do the very best I can,” DiMaggio said. “I can’t compete with the big farms putting out tonnage. I need to produce the very best quality.”

According to DiMaggio, the goal at Sacred Blossom Farm is to grow herbs of superior medicinal potency and blend amazing herbal teas.

DiMaggio says wild harvested herbs are generally more potent, so to mimic natural systems on the farm, he grows most of the herbs in dense poly-cultures in biologically active soils. Mixed plantings and minimal fertilizer and irrigation makes smaller, heartier, more potent plants, he said.

“If you have this biodiversity above ground, you’re going to have biodiversity below ground and it’s going to lead to a healthier system,” DiMaggio said. “The plants struggle and grow more slowly, but they are more potent than something that has cells that are just filled with water.”

With the help of some Amish neighbors, DiMaggio built the largest diversified herb dryer in the Midwest. The herb dryer has more than 1,000 feet of drying space and uses hot air pumped through a bed of rocks to help moderate temperatures during the day and maintain heat at night.

“I intentionally built it very large because I don’t want to have to harvest herbs every day, and the herbs aren’t always ready,” DiMaggio said. “By having a large herb dryer, I can wait until things are at peak potency and dry them at lower temperatures.”

DiMaggio said after his first year of growing herbs, he spent a significant amount of time perfecting the flavors of his teas.

“I thought, ‘this’ll be easy, I’ll just put together some tea blends.’ Oh, my goodness, it took me months and months, 300 iterations just on my Angel blend,” he said. “I’d do tests, trials, make notes. It doesn’t happen overnight. It was quite a process.”

“The stuff you find in most stores is drastically different that we produce here,” said Tyler Criswell, who has worked with DiMaggio for two seasons through the organization Worldwide Opportunities on Organic Farms. Criswell and other WWOOFers, as they call themselves, offer help on organic farms to gain experience in exchange for room and board.

Sacred Blossom teas can be found in about 80 Midwest grocery coops and cafes, DiMaggio said. Tea blends and bulk herbs are also available through SacredBlossomFarm.com.

“Folks have been enthusiastic about our unique growing practices and our teas,” DiMaggio said. “People really love it. They recognize the difference between this tea and whatever else they are able to get.”