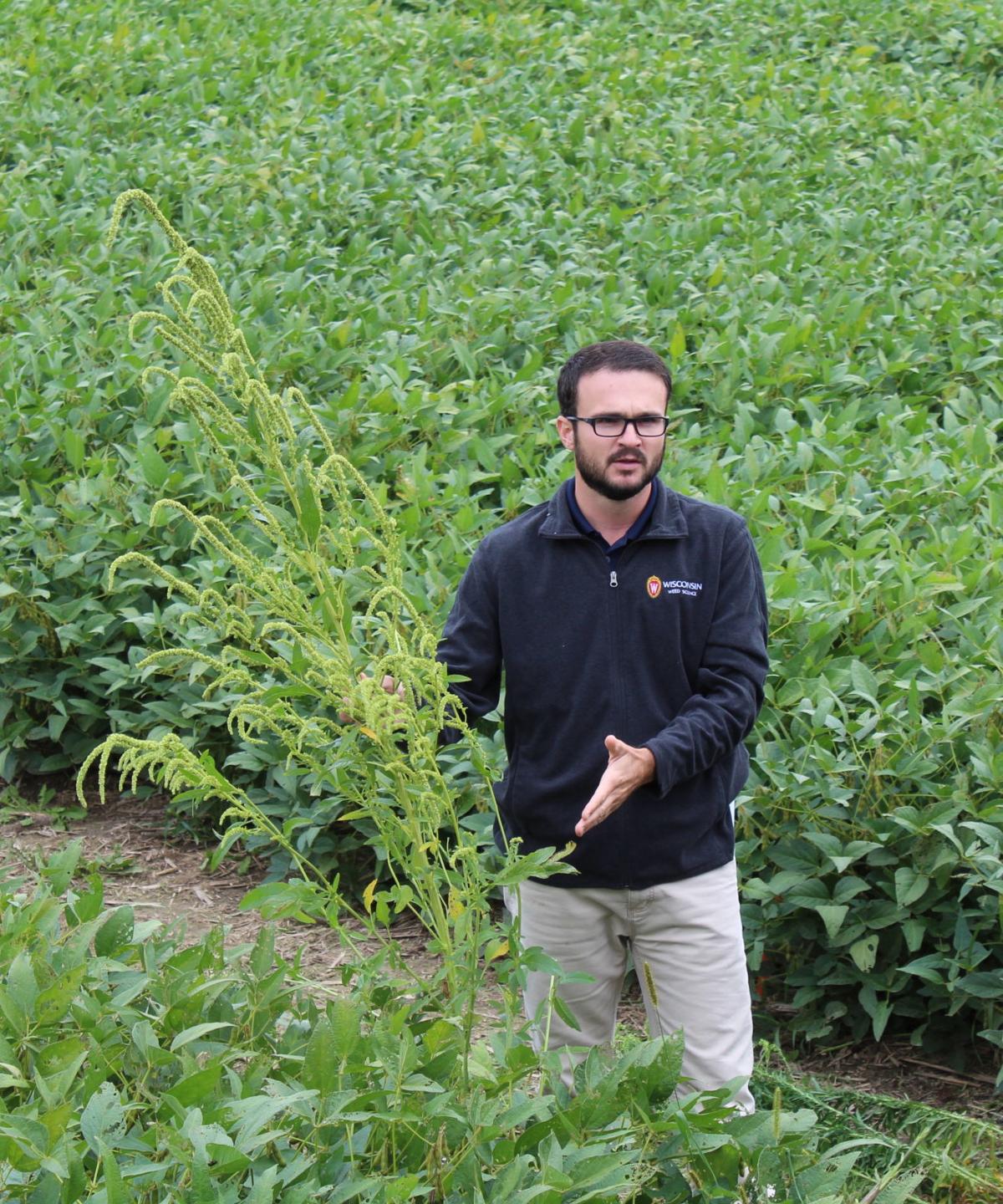 Rodrigo Werle, an assistant professor at UW-Madison and an Extension Cropping Systems weed scientist, displayed a large water hemp plant that was found in a soybean field during the workshop on Sept. 4. Cover crops may be a tool for farmers to use to combat weed pressure, such as pressure from water hemp. 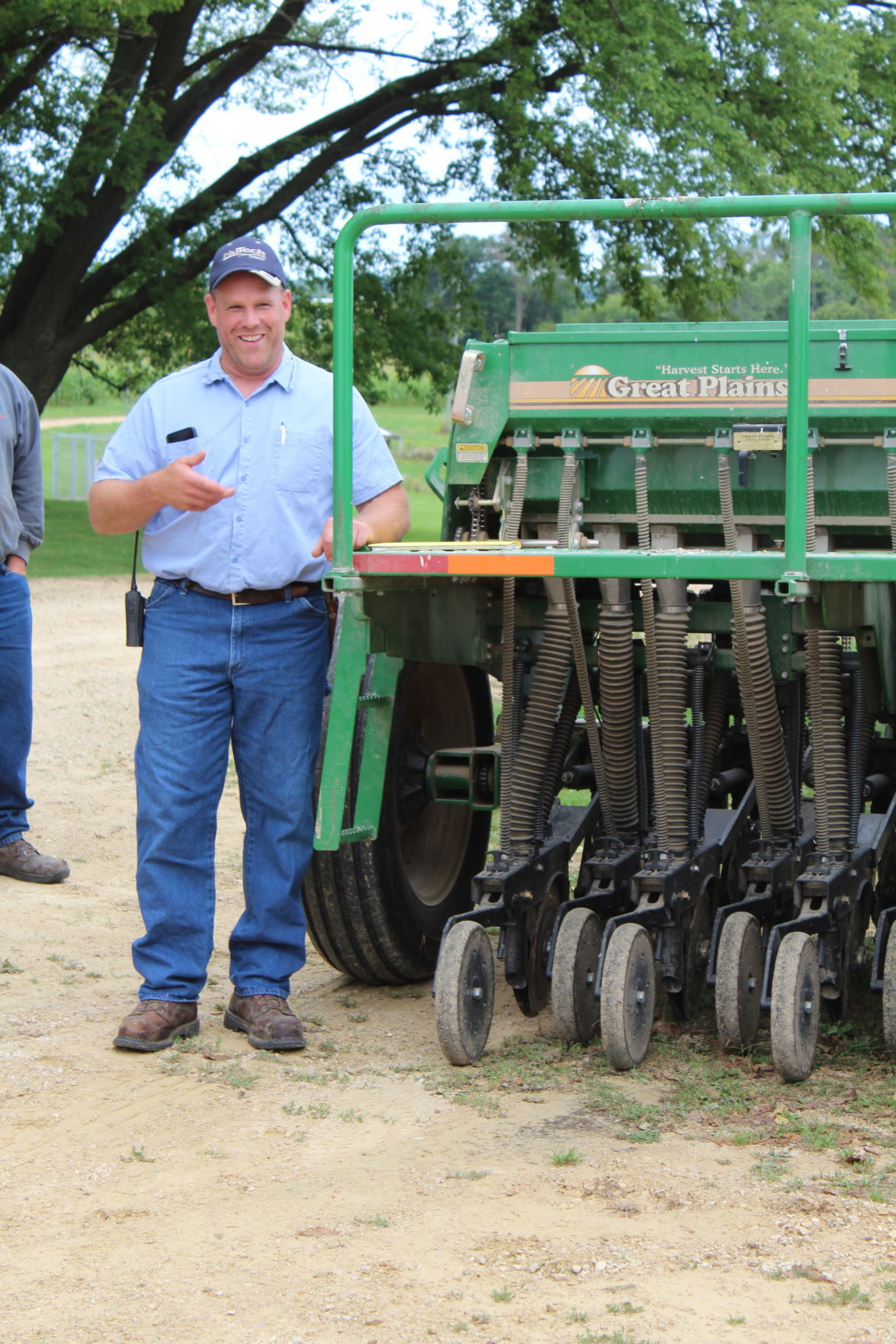 Doug Wiedenbeck, Lancaster Agricultural Research Station’s supervisor, explained how equipment already available on the farm was modified for both planting and harvesting of cover crops. 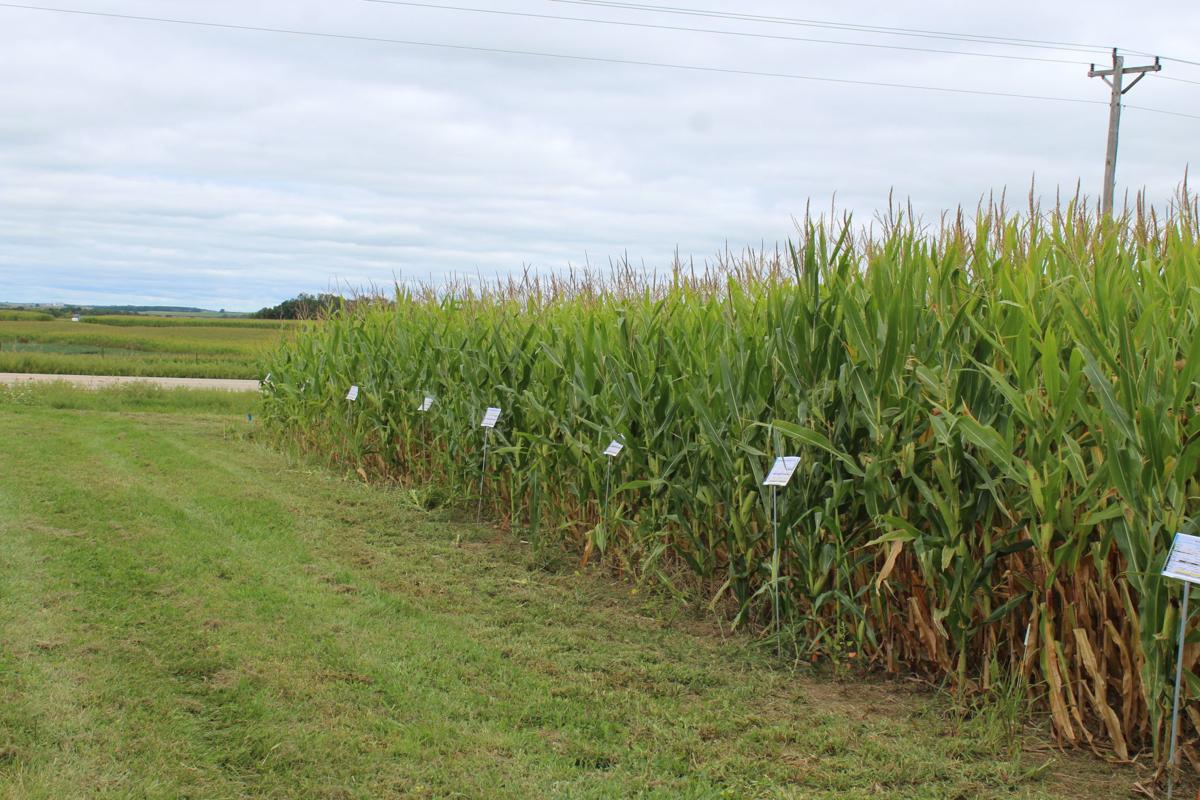 Rodrigo Werle, an assistant professor at UW-Madison and an Extension Cropping Systems weed scientist, displayed a large water hemp plant that was found in a soybean field during the workshop on Sept. 4. Cover crops may be a tool for farmers to use to combat weed pressure, such as pressure from water hemp.

Doug Wiedenbeck, Lancaster Agricultural Research Station’s supervisor, explained how equipment already available on the farm was modified for both planting and harvesting of cover crops.

LANCASTER — Steve Adrian and his son, Adam, have seen success in using cover crops in southwest Wisconsin. A hay shortage in 1978 led Steve to try cover crops for the first time, planting rye to feed his heifers during that time. Now rye is an important component to their farm, serving as excellent forage for their steers’ high energy and finisher rations and a feed supplement when dry years have reduced expected forage production.

Cover crops have also proved a success for Gary Stelpflug, who began using cover crops in 1983. He currently plants winter wheat, harvesting it for both grain and straw. Following wheat, he establishes another cover crop of winter cereal rye and radishes, harvesting that mix in the fall as forage for his heifers.

Josh Kamps, Lafayette County UW-Extension agriculture agent, has even seen the benefits of cover crops on his own farm as well, serving as good livestock feed, increasing soil tilth, allowing for more timely manure applications, preventing soil erosion and building more organic matter and soil life. He has also seen cover crops reduce weed pressure on his farm — an idea that is currently being explored through trials at the Lancaster Agricultural Research Station, which was the setting for a Cover Crops Workshop on Sept. 4.

Cover crops are mostly annual or winter annual plants — plants that we’ve always planted and had the option to plant, just in a different system, setting and for a different purpose, Kamps said. They are becoming more popular as farmers begin to realize their potential benefits, including their ability to establish a living root quickly, provide quick foliage growth, thrive in adverse weather conditions and be competitive with other plants, particularly weeds.

The role of cover crops in weed suppression is something currently being researched by Rodrigo Werle, an assistant professor at UW-Madison and an Extension Cropping Systems weed scientist, and his graduate students. One student in particular, Colby Grant, has been studying the costs, weed population dynamics and crop productivity of soil conservation practices, such as cover crops and no-till, in corn-soybean production systems, testing 12 different treatments over 4 years.

Cover crops can be a good tool for weed management as they directly compete with weeds for light, water and roots; they also physically hinder weed seedling emergence and tie up nitrogen. The bigger the biomass of the cover crop, the fewer weeds there typically are.

While the research is ongoing, Werle challenged those farmers in attendance to think of adjustments that can be made in their systems — such as non-chemical applications — to help a herbicide program. Incorporating cover crops may be one tool that could be added to that tool kit, cutting down on the number of herbicide applications and saving the farmer some money.

“We’ve been seeing that combining a cover crop and herbicide as an integrated program has shown the best results in the research plots,” said Werle. “It’s a new mode of action to our system.”

However, Iowa County UW-Extension agriculture agent Gene Schriefer was quick to note that farmers should identify the key issues they’d like to address on their farm through cover crops first before buying seed, which can often be expensive. One plant won’t fix all the problems, but a farmer can match the right species of cover crop to their current goals and select something that suits their current needs.

“It does complicate management, but it can be done,” he said. “It comes down to timing.”

It’s also important to have a plan for termination of cover crops; otherwise the farmer’s success in weed management can turn into a weed problem. The best termination strategy will depend on the farmer’s purpose and preference, along with the availability of equipment.

Dan Smith of UW-Madison’s Nutrient and Pest Management program and Doug Wiedenbeck, Lancaster Agricultural Research Station’s supervisor, showed how equipment already owned by farmers can be modified to suit the needs for cover cropping. Wiedenbeck displayed planting equipment that he modified after doing some research and explained that it doesn’t have to be complicated or that expensive to adjust.

“My main takeaway here is that we can keep it simple,” said Smith. “What we already have can be upgraded easily and without much expense. It can be simple to start.”

Like many new ideas and systems within agriculture, it takes time, effort and dedication to try something new, and cover crops are no different.

“It’s only going to work if you make the time,” Werle said. “Make sure you take the time to do it right.”