A farmer baled hay along 84th Avenue in Eau Claire County in July. 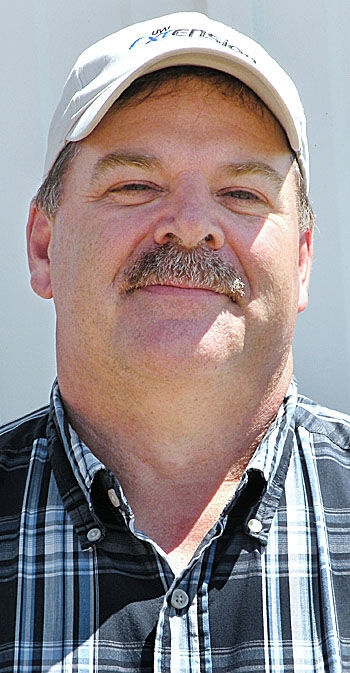 After years of slogging through soggy fields, Wisconsin farmers finally have some cause to be optimistic about the progress of their crops this time around.

Crops are racing ahead of the slow pace set by poor weather last year, with the progress of corn silked at 93% and soybeans blooming at 94%, paces that are 25 days and more than four weeks, respectively, ahead of last year, according to the Wisconsin Crop Progress & Condition Report issued Aug. 10 by the U.S. Department of Agriculture National Agricultural Statistics Service Wisconsin office.

Both of those metrics are ahead of the five-year average as well, with corn silking a full week ahead and soybeans blooming nine days ahead of anticipated timing.

The hay crop has overall done well, said Jerry Clark, Chippewa County UW-Extension agriculture agent, adding that some farmers are even seeing their third crop turn out better than their second.

Crop conditions continue to fare well, with most crops rated over 80% good or excellent statewide, according to the Aug. 10 progress report. The all hay condition, rated 78% good to excellent, and pasture condition, rated 68%, were the only items reported by the National Agricultural Statistics Service to fall below the 80% marker.

“I think, overall, (the growing season has) been pretty good,” said Clark.

The experience in many Wisconsin fields this year has been a far cry from the extremely abnormal wet conditions they faced last year.

That Mother Nature has been kinder this year is good news for an occupation that Halopka described as 15% dependent on farmers’ management input and 85% reliant on Mother Nature.

It was dry enough this spring to get crops in in a timely manner this spring, Halopka said, and there’s been enough rain since to maintain a good crop.

The heavy moisture that persisted from planting to harvest in 2019 hasn’t reappeared for the 2020 growing season.

While farmers have likely become more accustomed to the overly wet growing seasons that have been typical recently, in a change of pace, more fields this year could use, if anything, a little more moisture.

Heavy rains and localized storms have been sporadic across the state to provide the amount of moisture farms have received this summer, with the potential for rain totals from an event to have a multiple-inch range within a single county, Clark said.

That trend is continuing, with the Aug. 10 NASS report stating that areas, particularly in western Wisconsin, that missed out on scattered showers the weekend prior to the report specifically needed additional rain.

In Chippewa County, Clark said he has seen more irrigation systems in use recently.

The drier growing season has allowed some farmers to get back into some lowlands, clean them up and get more bedding, Halopka said.

As the season progresses, crops could use a little more rain and a little more warmth to finish off, Clark said, followed by a warm and dry fall with a later frost.

If forecasts from the Aug. 12 USDA NASS Wisconsin Crop Production Report — based on Aug. 1 conditions and not reflective of weather events since — are realized, farmers may see record-high yields for corn and the second-highest yields on record for soybeans this year.

Year-over-year yield increases are also being projected for winter wheat and oat production.

While good field conditions — which will also ideally turn into lower drying costs at harvest time — may be providing some measure of relief for farmers this year, low prices for the commodities themselves still present some concerns.

“Prices could be better,” Clark said.

A good growing season with an expected good yield can offset those low prices, but that offset isn’t a substitute, he said.

While strong wind storms known as a derecho last week caused significant damage to crops and buildings in Iowa, Illinois, southern Wisconsin and parts of Indiana, neither Clark nor Halopka foresaw a widespread ripple effect on the crops industry elsewhere. The full extent of the damage from the wind storms will likely not be known for weeks, however.

With prices seemingly unlikely to change much, farm managers will have questions they have to address yet, Halopka said, including “How am I going to market that crop?” and “Am I going to get enough yield to make a profit?”

Farmers will also have to consider the potential benefits of putting their crops into livestock versus selling them at market, Halopka said.

In getting answers to questions like those, “it’s OK to pick up a phone and ask for advice,” Halopka said.

Despite the challenges presented by prices and COVID-19, though, Clark said, farmers, from a crop management perspective, are finally getting a bit of a break this year.