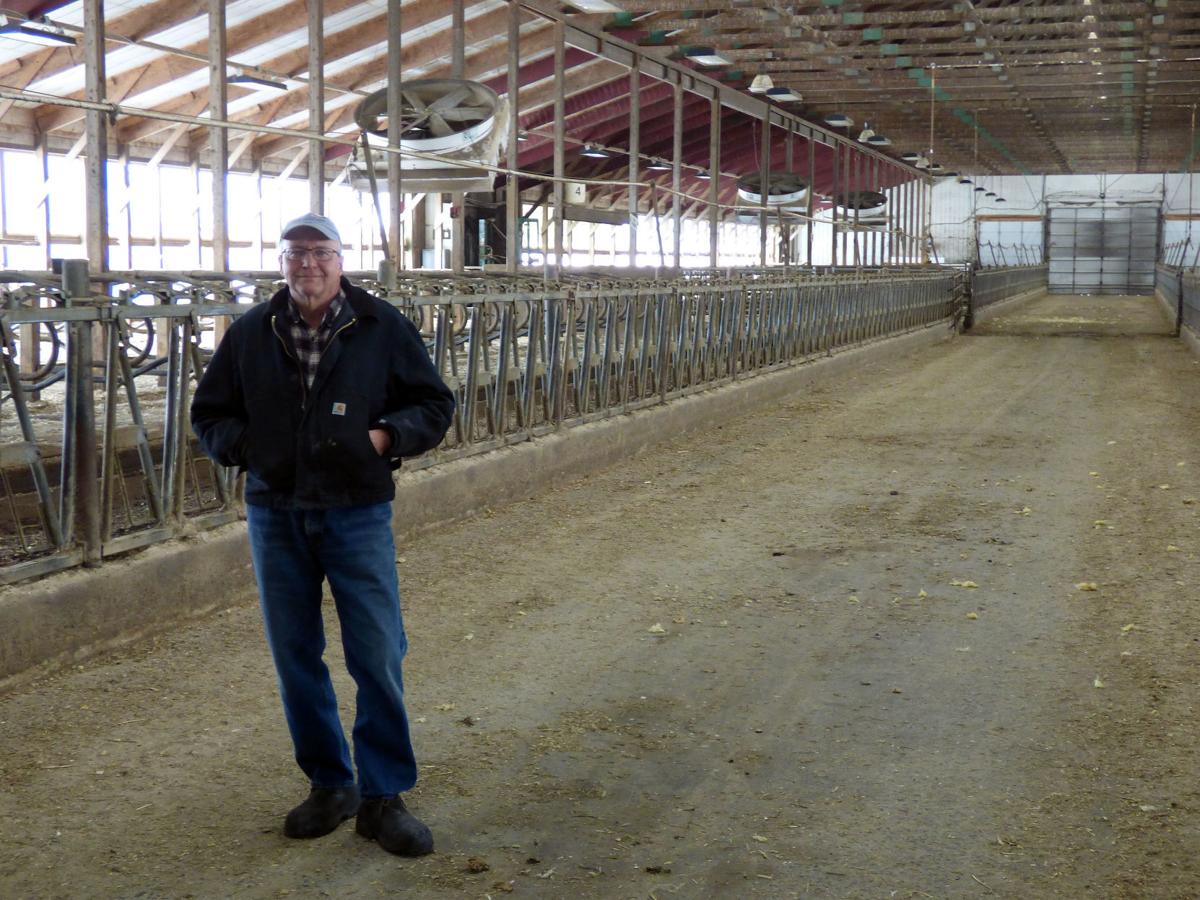 Paul Adams stood in the empty free-stall barn on his Trempealeau County organic dairy farm. Many of Adams’ cows were sold to a large dairy in Texas. 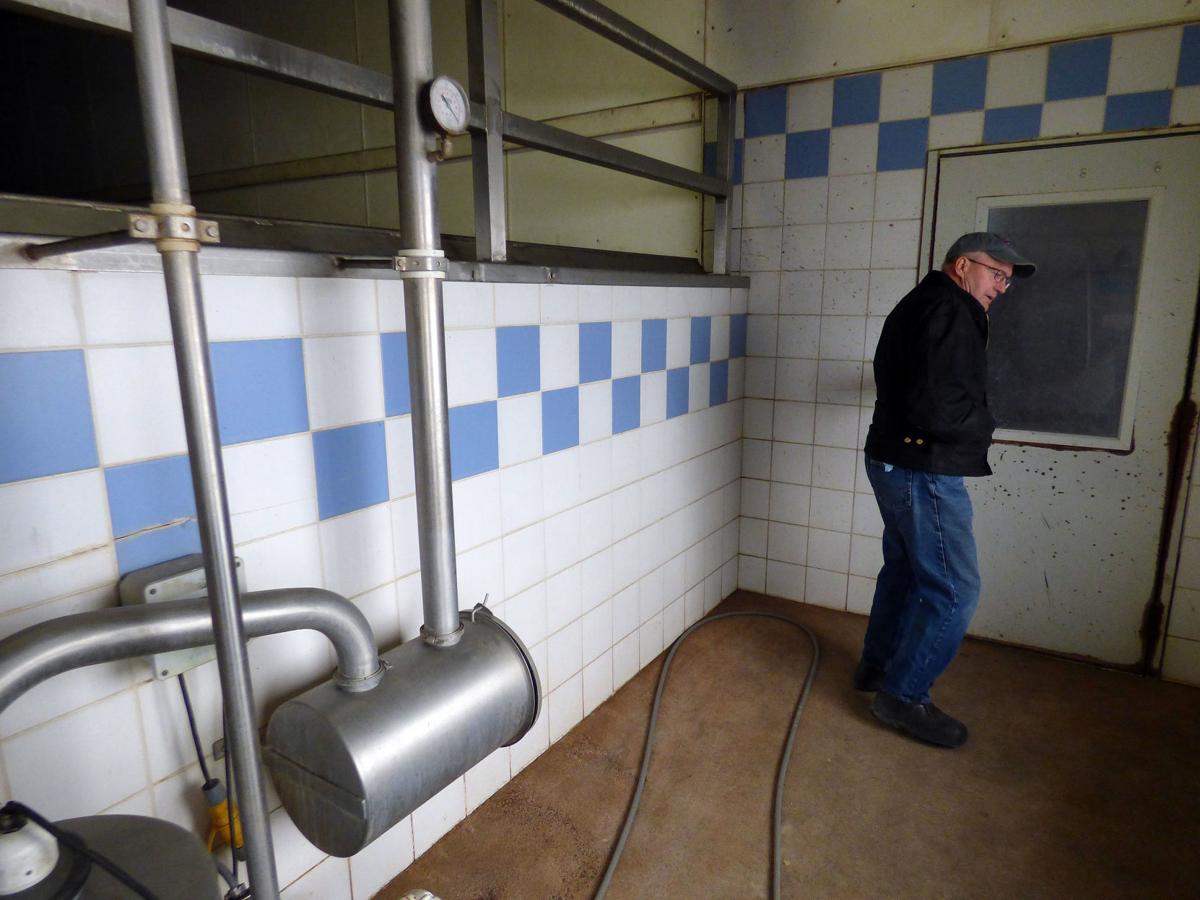 Paul Adams walked out of the milking parlor on his Trempealeau County farm. The double-12 herringbone parlor was built in 1994, “and still structurally sound, so I guess we got what we paid for,” Adams said. 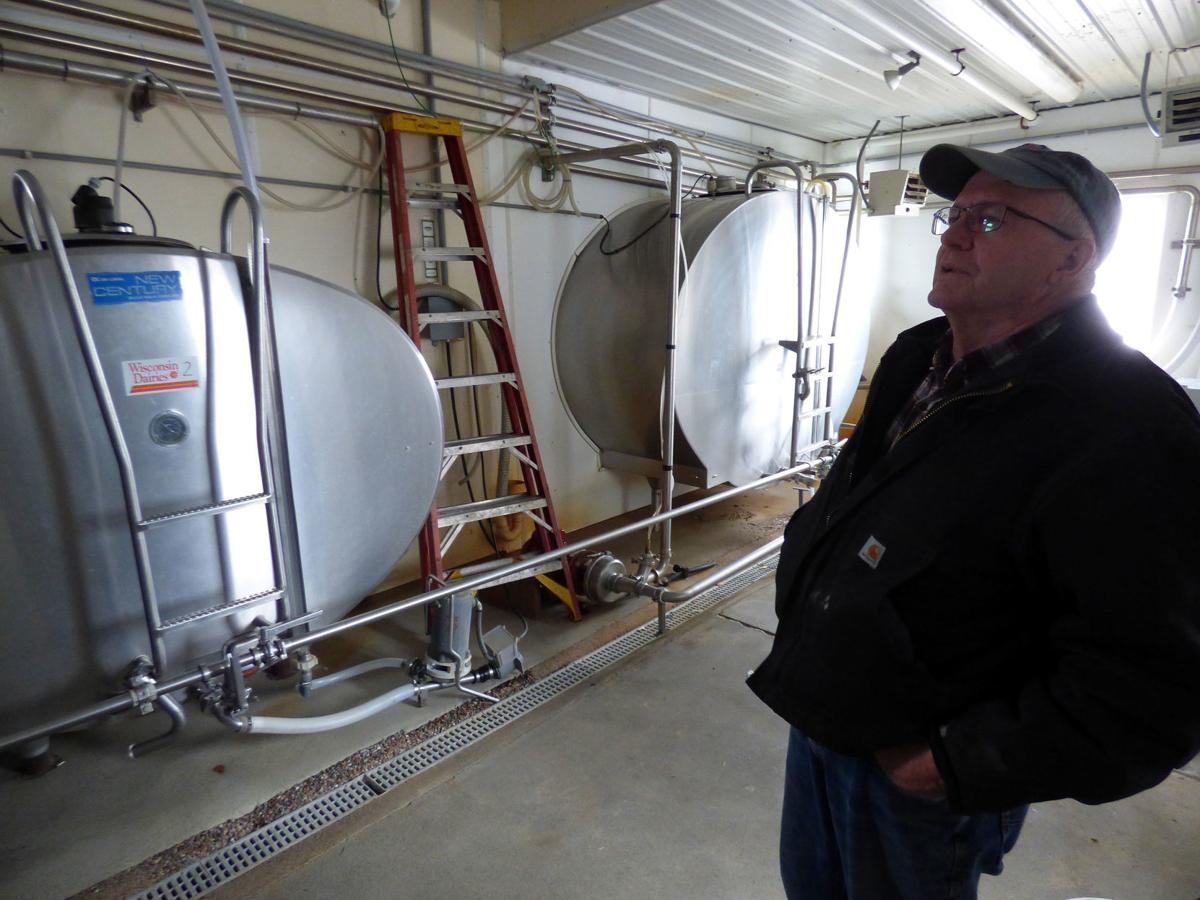 The milkhouse on Paul Adams’ Eleva dairy farm had 4,000-gallon milk tanks to allow for storage before shipping.

Paul Adams stood in the empty free-stall barn on his Trempealeau County organic dairy farm. Many of Adams’ cows were sold to a large dairy in Texas.

Paul Adams walked out of the milking parlor on his Trempealeau County farm. The double-12 herringbone parlor was built in 1994, “and still structurally sound, so I guess we got what we paid for,” Adams said.

The milkhouse on Paul Adams’ Eleva dairy farm had 4,000-gallon milk tanks to allow for storage before shipping.

ELEVA — Paul Adams thought he had done everything right.

His northern Trempealeau County dairy farm had been certified organic in 2002. He took care of his cattle, his land and his employees. He even had a daughter hoping to eventually take over the farm that had been in his family for 148 years.

But by early March, his barns were empty, his cows were loaded onto trailers headed to Texas and Adams Dairy had joined the growing number of farms forced out of the dairy industry due to unfavorable market conditions in recent years.

“I could not see a way to produce milk cheaper while still taking care of my cattle and employees how I felt was right,” Adams said. “You think, jeepers, you should have done something differently. But you talk to anybody in the industry, and they’re all hurting.”

Adams was cropping about 1,100 acres and milking about 600 cows, but declining organic milk prices and growing debts were catching up with him, and several factors that hit in 2019, including weather difficulties, loss of a bedding supplier and no rebound in the price of milk, made it impossible to continue farming, he said.

Wisconsin lost a total of 818 milk cow herds in 2019, according the Wisconsin Department of Agriculture, Trade and Consumer Protection. In the past five years, the state has lost more than 3,000 dairy herds. This year has started off much the same way, with another 64 dairy farmers leaving the business in the first two months of 2020, according to DATCP.

For many years, organic was seen as a bright spot in the dairy industry. But recently organic prices have been declining as well as more milk comes on the market.

According to the U.S. Department of Agriculture, organic milk production jumped 18.5% in 2016. Because the jump in production eclipsed the growth in market demand, wholesale purchasers of raw organic milk cut prices to farmers by 25 to 30% or more, according to the Cornucopia Institute, an organic industry watchdog group.

Adams said that rapid increase in the amount of organic milk on the market was making it increasingly difficult to find both a steady buyer and a good price for his milk, and on Oct. 31, 2017, Adams was given 60 days notice that a milk contract with their distributor on the East Coast would not be renewed.

“There was so much cheap milk on the East Coast from Plains states large dairies,” Adams said.

Adams was most recently shipping milk with Dairy Farmers of America to Kemps. Before that, the dairy was shipping milk to the East Coast through Amish Country Farms with Scenic Central Co-op.

“They were able to find buyers on a weekly basis,” Adams said. “A couple days it went to conventional in early January.”

At about that same time, loans Adams had with local banks were sold to another financial institution and saw his required payments increase.

“We were concerned what direction things would go when we first lost that contract out east,” Adams said. “If we had to work at a lower-yet price, it was below our break-even, and if it was going lower, it would be impossible to continue.

“We had hoped for a potential rise in milk price when our contract ended of maybe a dollar or two higher. Instead we got no contract and less money and an investment company that wouldn’t work with us.”

Adams took over the family farm from his father in 1979. In 1994, he built a free-stall barn for 360 cows and a milking parlor. He then added a compost barn for calving and another four years ago for breeding age and pregnant heifers.

After switching to organic in 2002, Adams was separating manure solids and liquids and composting manure in windrows. He would also inject liquids into fields so it wasn’t sitting on the surface for weeds.

“We were trying to work with organic as a system, not modifying conventional to be organic,” Adams said. “I saw fantastic results, but then the price of milk dropped so low you couldn’t make it right.

“I was able to be in long enough to prove to myself that was the right way to do it. The quality of the food we produced the last few years — nobody else may realize it — but we’ve got to feel good about it.”

Mary C. Anderson, president of River Country Resource Conservation and Development, said Adams and his farm were a model for how a farm should operate, even during challenging times.

“As a businessman, Paul did everything right,” Anderson said. “When he started his expansion, he paid very close attention to the market. He went to grazing at exactly the right time to lower his cost of production. And he went to organic with an eye to the future.”

Once the price paid for organic milk started to decline, Adams expanded the dairy to its recent level of 600 cows. However, he said, the Driftless Area surrounding his farm is not conducive to the farm getting any larger.

According to the USDA, there are now six organic dairies in Texas that produce more organic milk than the 453 organic dairies in Wisconsin combined. A majority of Adams’ cows and pregnant heifers went to Texas to a farm expanding from 2,200 cows to 3,000, he said.

The Cornucopia Institute has called into question USDA enforcement of grazing rules required of organic dairies, saying, “factory farms, some milking as many as 15,000 cows in desert-like conditions in the Southwest, are defrauding consumers by depriving them of the documented nutritional superiority in pasture-based organic dairy production.”

“I’ve not been able to find anyone who can explain how you can graze 5,000 cows to comply with the organic rules,” Adams said. “When I went organic, I looked at it and thought, ‘I like what this is doing for the soils, the cattle and the product.’ But I also think the difficulty of doing it should keep it Wisconsin-small-farm scale.

“When that was no longer the case, it became a spiral downward.”

With Adams Dairy’s closing, Adams said 21 employees, including Adams and his daughter, Becky, are out of the job. Becky returned to the farm 15 years ago after earning a dairy science degree at UW-Madison and had hoped to continue farming in the future, Adams said.

“She loved the animals,” he said. “Now she’s left with nothing.”

As his prices have been declining over the past couple years, Adams has become more politically active, working to bring attention to his situation and the difficulty many Wisconsin farmers are facing.

“If there aren’t some big changes, Wisconsin is not going to have much dairy left,” Adams said.

“Wisconsin farmers are the backbone of our rural economy, but right now they are facing a storm of challenges and President (Donald) Trump’s trade wars have hurt, not helped, our farmers,” Baldwin said. “This administration needs to do better for family farmers in Wisconsin ... .”

Adams said he expects the land and equipment to be sold to cover as much of his debts as possible. While he doesn’t see himself directly involved in farming in the future, he said he plans to continue lobbying legislators until other farmers see some relief.

“With that, I feel like I’ve at least accomplished something,” Adams said. “Maybe I can make a difference for the rest of the farmers in Wisconsin, just telling my story.”