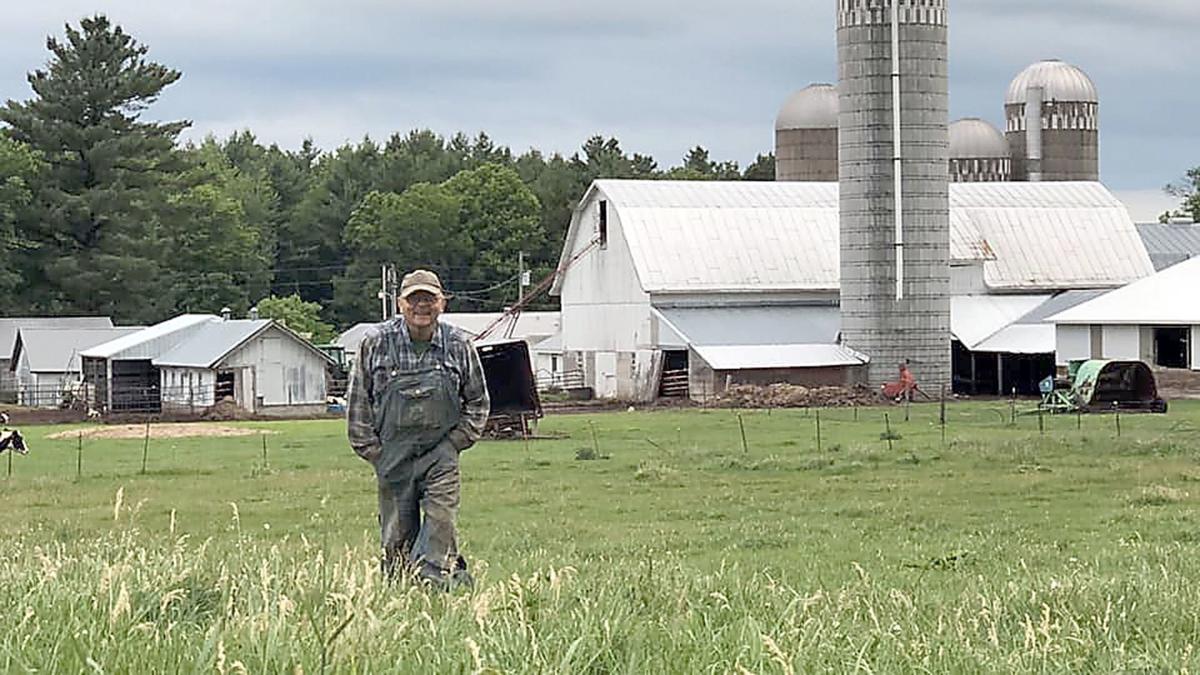 Norman Anderson brought the cows in from pasture for their final milking on Sweet Pine Farm June 15 in Fall Creek. Anderson’s daughter, Christine Engler, went out to the pasture early that morning and sat and waited for him to come and get the cows in order to get this photo. 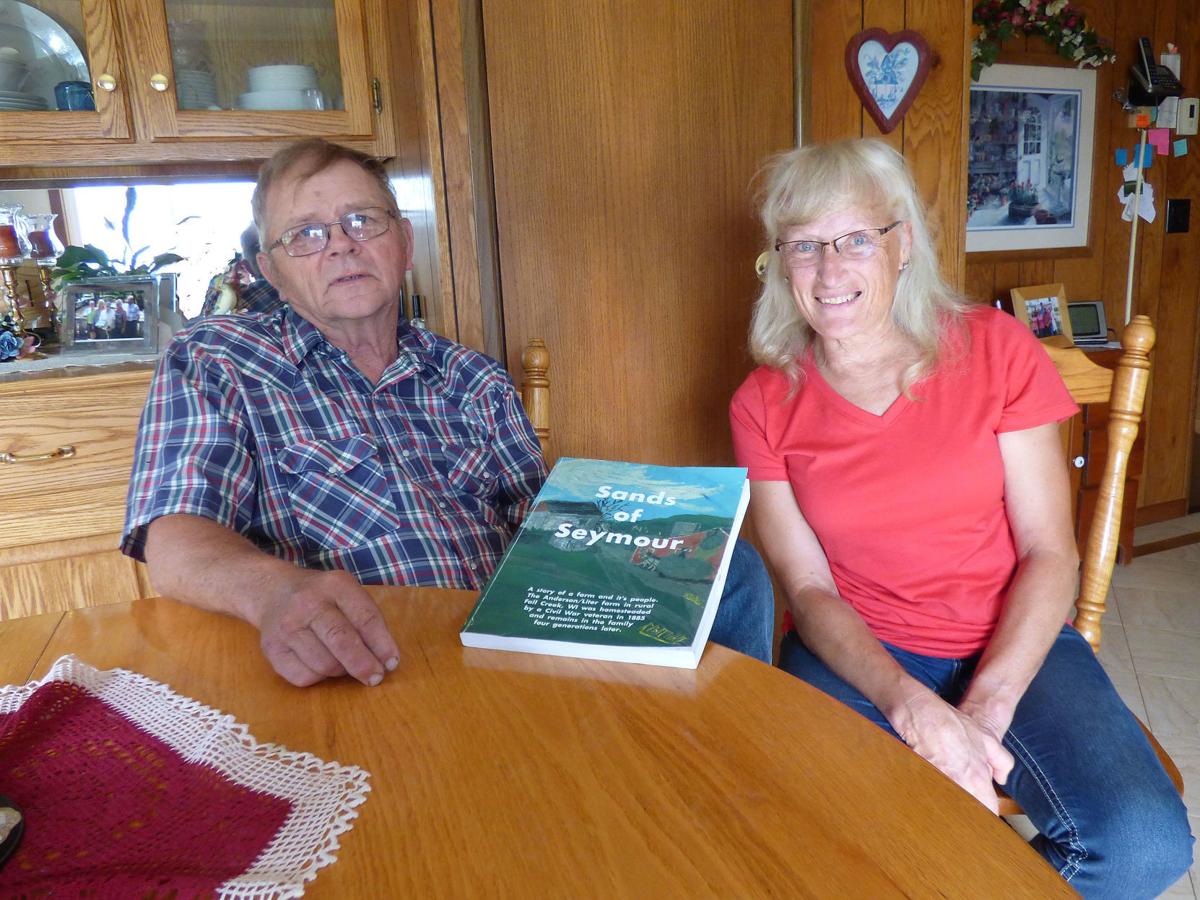 Norman and Jane Anderson left the dairy industry in mid-June at their Fall Creek farm in Eau Claire County. The Andersons are holding a copy of a book about the history of their farm, which has been in the family since 1885.

Norman Anderson brought the cows in from pasture for their final milking on Sweet Pine Farm June 15 in Fall Creek. Anderson’s daughter, Christine Engler, went out to the pasture early that morning and sat and waited for him to come and get the cows in order to get this photo.

Norman and Jane Anderson left the dairy industry in mid-June at their Fall Creek farm in Eau Claire County. The Andersons are holding a copy of a book about the history of their farm, which has been in the family since 1885.

FALL CREEK — Like 43 other Wisconsin farmers, Norman and Jane Anderson of Sweet Pine Farm in Fall Creek quit the dairy industry in June.

After 55 years of milking cows, it wasn’t an easy decision to make, Norman Anderson said, and because of the coronavirus pandemic, it wasn’t easy to accomplish.

But on June 15, Anderson milked his cows for the final time before loading the herd onto trailers for their journey to new homes.

“It hasn’t hit too hard, because I’ve got too many undone things yet,” he said. “The situation of late is, I’ve got three tractors that went down that all need maintenance.”

The Andersons had been planning their exit from the dairy industry for several months. Norman said milk prices taking a hit at the beginning of the coronavirus pandemic in the U.S. was just another factor in their decision.

But because of COVID-19, the path out of dairying wasn’t as straightforward as it otherwise might have been. Not only did dairy prices take a hit at the onset of COVID-19, but cattle prices did as well, and the Andersons didn’t want to part with their herd for less than a fair price.

“Jane’s going to retire, and I thought I’d pull my horns in a little bit after she retired,” Norman said. “And then with COVID, the cattle market took a plunge, so we held back for a couple months.”

Norman had planned to crop more of his farm this summer, but because he pastured his cattle he had to hold off on planting the last 35 acres.

“So my corn didn’t get planted until the day after the cows were gone,” he said.

The Andersons were milking about 30 cows at the end of their dairying. The farm’s tie-stall barn was designed to hold 35 animals. Over the years, Anderson added a pipeline, a pack barn and designed his own single-6 step-up parlor and expanded to milking 60 head.

“I’d do it all over again if I had to,” Norman said. “There are things you wish you wouldn’t have done this or would have done that, but operations like what’s here, there’s not that many more of anymore.

“I hope we see the small dairies continue. It’s kind of a family thing, which is the biggest, most important part of the small dairy industry.”

As of Jan. 1, Wisconsin was home to 7,292 dairy farms. By July 1, the number of dairy herds in the state had dipped to 7,079, according to the U.S. Department of Agriculture National Agricultural Statistics Service Wisconsin field office.

Wisconsin lost a total of 818 milk cow herds in 2019. The rate of decline had slowed in early 2020, but 45 dairy farmers exited the business in May and 44 followed in June.

After five years of depressed milk prices, a turnaround looked like it was on its way in late 2019 and early this year, but the coronavirus pandemic put an end to that recovery.

The Wisconsin all milk price for May 2020 was $13.60 per hundredweight, according to the June 30 NASS Agricultural Prices report. That was 40 cents lower than last month’s price and $4.60 lower than last May’s price.

June’s prices were projected to rebound, but Norman was worried that wouldn’t last.

“Right now there’s a pie-in-the-sky idea that milk will be better priced, but it’s just going to be for a short time, I’m thinking,” he said.

Sweet Pine Farm has been in the Anderson family since 1885. The original homestead and a neighboring parcel added by Norman’s grandfather in 1936 make up the 240-acre home farm. Another 107 acres to the north of the home farm were added to the farmstead when his grandfather married his grandmother.

Norman, who is about to turn 73, had been milking for 55 years. He took over from his father not long after graduating high school. His milking herd started with the gift of a 4-H animal from his father and five cows he bought while in high school. Norman said his father didn’t want him to feel tied to the family farm, so he attended short course at UW-Madison.

“He gave me the impression I should venture out to do something I wanted to, but I guess I had my mind made up,” he said.

Norman said that due to low milk prices and wanting to get out while he’s got his health, he’s been thinking about leaving the industry for about four years.

“The reality of the situation is, he’s the person would stay positive no matter how bad it got,” said Christine Engler, the couple’s daughter and one of their four children. “He would have hung on to the end, but it just doesn’t look like it’s going to get better.”

Norman said he plans to maintain the dairy barn just in case it can ever be of use again. His son, Wade, has some interest in the farm, and Norman said he’d be willing to mentor a farmer hoping to get into dairying.

“I’ll take care of what we’ve got here, and if there is a good future for someone, they definitely could step in,” he said.

Norman said his leaving the dairying behind comes at a good time, since he and Jane are healthy. He said he’s had a couple close calls with cows over the years, and the couple survived another close call while being trapped in a silo about four years ago.

Norman was trying to clear haylage from a clogged chute when he got trapped in a silo. Jane also got trapped in the chute after going to look for him when he didn’t come in from the barn for dinner.

“He told me not to come out to help him, because I was sewing tree skirts for the kids for Christmas,” she said. “I looked at my watch and said, ‘Oh, shoot, he’s not in for supper.’

“I bundled up and went out looking for him. It’s an eerie feeling when you walk into the barn and there’s no sound in the barn other than the cows bellering.”

Jane was trapped when she tried to clear the chute herself. Luckily, Jane had called 911 before going out to look for Norman, and rescuers were able to find both of them after figuring out which silo they were in.

The Andersons kept about 25 youngstock from the herd. They have chickens and plan to raise a few beef cattle and to continue to sell beef, eggs and produce from Jane’s five gardens locally.

“She’s got a green thumb,” Norman said. “She’s got all her gardens, so she has plenty to do.”

And while the dairying is done, the farming adventures have continued.