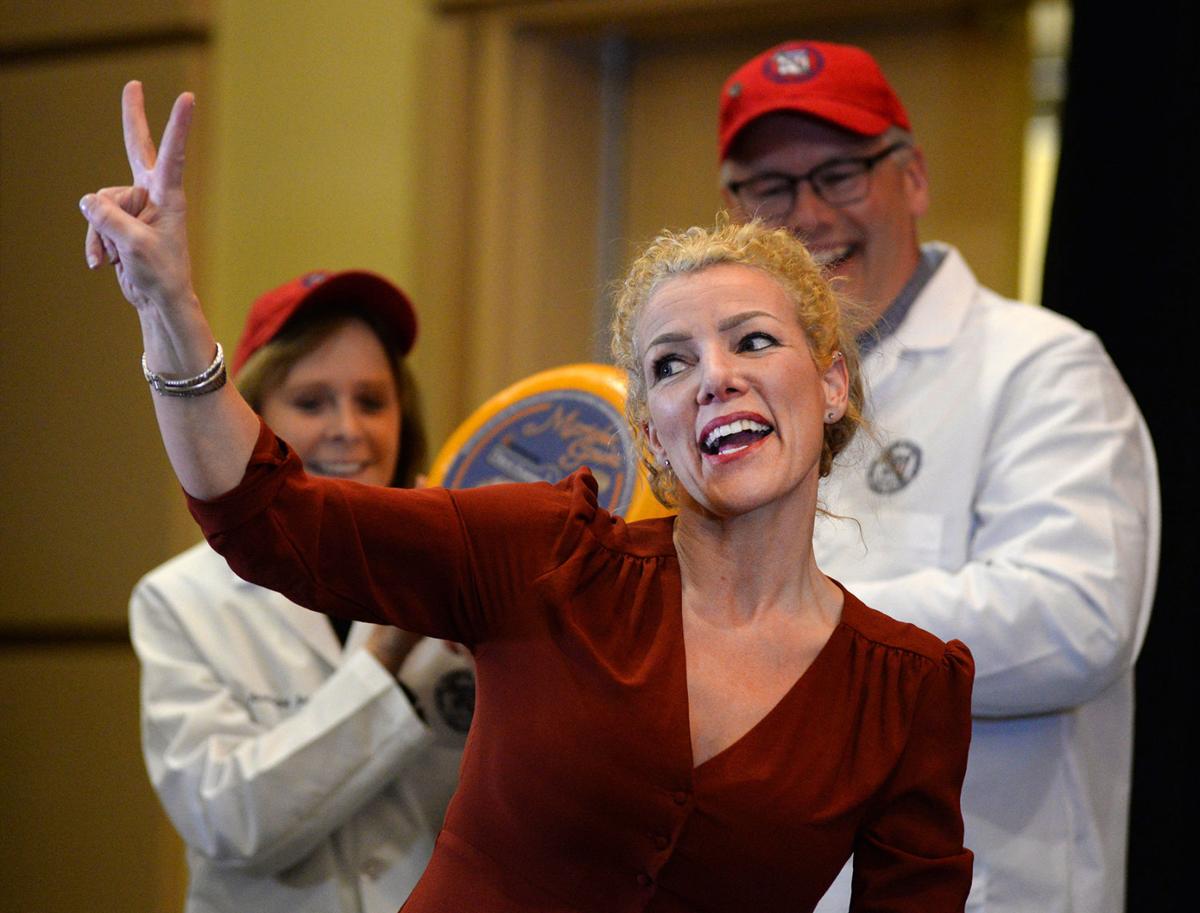 Marieke Penterman of Marieke Gouda in Thorp had cheese entries take first- and second-runner up honors at the United States Championship Cheese Contest in Green Bay. 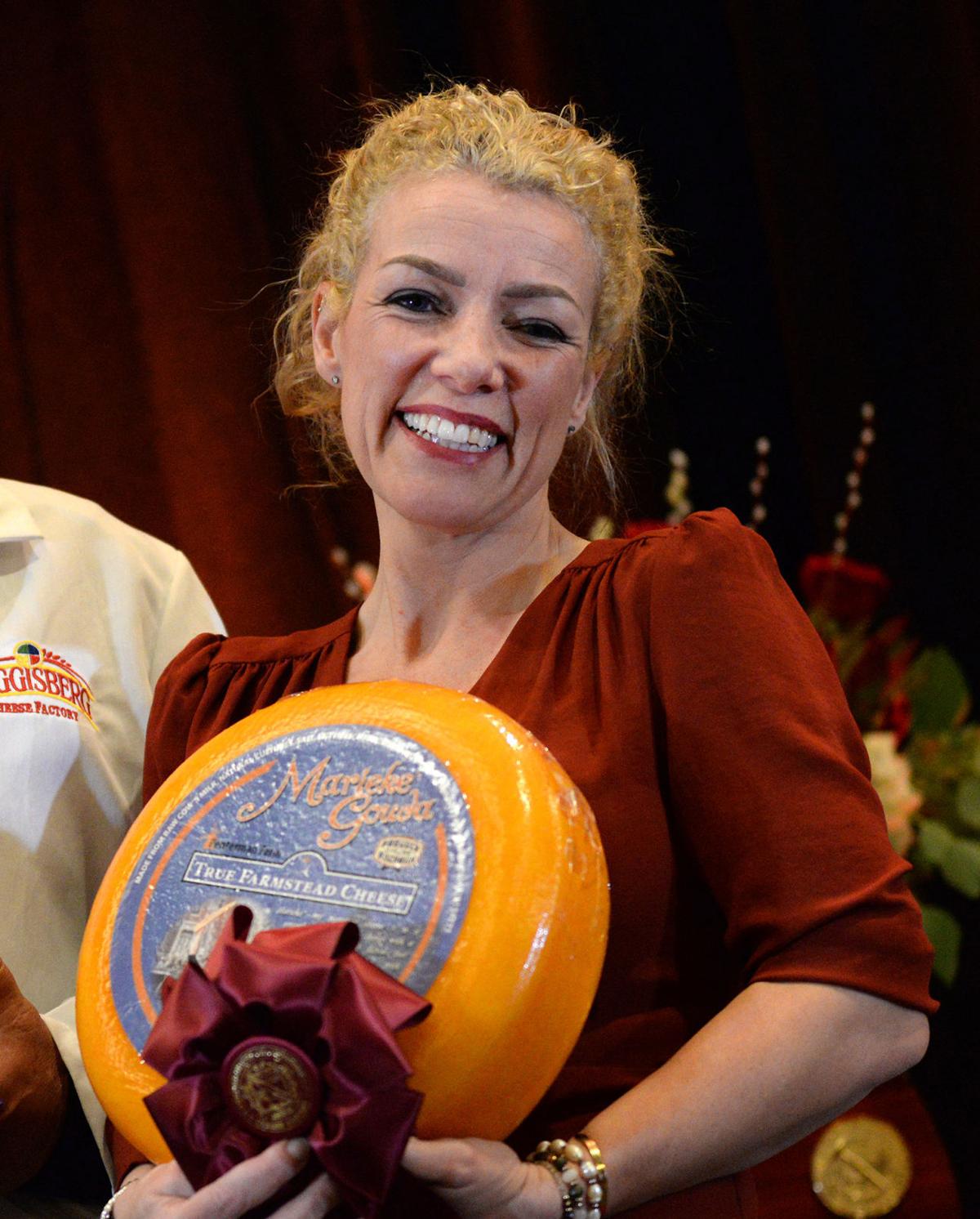 Marieke Penterman was all smiles at the United States Championship Cheese Contest in Green Bay.

Marieke Penterman of Marieke Gouda in Thorp had cheese entries take first- and second-runner up honors at the United States Championship Cheese Contest in Green Bay.

Marieke Penterman was all smiles at the United States Championship Cheese Contest in Green Bay.

Penterman flashed a smile, held her arms overhead and danced near the podium as her Thorp-based business, Marieke Gouda, clinched first- and second-runners up honors at the national championship on March 7.

“We are super stoked to have two of our cheeses in the top three,” she said, adding that the secret to her success are “happy cows here in Wisconsin. Dairy farmers here in the United States are putting so much passion in their product. They give us such a great quality of milk.”

Guggisberg Cheese also produced the top cheese in 2015, while Marieke Gouda staked its claim as best cheese in the land in 2013.

This year’s event featured a record-setting 2,555 entries from 35 states. The competition ranks as the largest technical cheese, butter, yogurt and dry dairy products contest in the country. A team of 60 nationally renowned judges from 20 states analyzed each entry’s flavor, texture, salt, color, finish and appearance.

Overall, Wisconsin cheesemakers dominated this year’s event, earning Best of Class awards in 57 of the 115 classes and placing 10 entries among the top 20 finalists nationwide.

Leading the way was Marieke Gouda, with nine entries placing in the top three of their respective classes.

After taking celebrating dance steps on stage at the awards presentation, Penterman shifted the spotlight to her fellow cheesemakers and colleagues at Marieke Gouda.

“I want to (dedicate) these awards … to all the dairy farmers in the United States,” she said. “Dairy farmers are supplying us with food every single day, and it hurts me to see that those dairy farmers are not having enough food on their own table. We are doing a great job providing a high-quality of milk being able to compete with very good cheeses.”

Penterman highlighted her team among those people doing a great job.

“I want to thank my team for always having my back through all the years,” she said. “This is just the beginning. I hope to do much more.”

Penterman was born and raised in the Netherlands, where she grew up on her parents’ 60-cow dairy farm. She met her future husband, Rolf Penterman, in Canada while serving a dairy farm internship.

Rolf ended up moving to Thorp and starting a dairy farm. The couple eventually reconnected, got married and are raising their children in Clark County.

Marieke Penterman wanted to start her own business before she turned 30, originally setting her sights on custom decorating children’s furniture.

Then one night she had a revelation.

“We have good Wisconsin milk here. I miss my Gouda. I want to start my own business,” she said a few weeks ago during a different event in Green Bay. “So I woke up Rolf and I said, ‘Honey, I think I know what we should do. I think we should make Gouda.’

“And like every good husband, he said, ‘Yes dear, let’s talk about it tomorrow.’ And he turned around. But my wheels were turning.”

With a few thousand dollars, including a loan from her parents, Penterman got the operation up and running using milk from their Holstein and Brown Swiss cows at Penterman Farms.

In November 2006, Penterman produced her first batch of Gouda. “I remember the first time cutting open that wheel and we both were very nervous,” she said. “Thankfully, it turned out pretty good.”

Four months later, the Pentermans entered their first U.S. Championship Cheese Contest and emerged with a medal, the first of more than 150 national and international accolades over the years.

Marieke Gouda is among a handful of Wisconsin farmstead cheese operations, meaning the cheese it produces is made from milk collected solely on that same farm.

“I started (in 2006) and never expected it would explode the way it did,” said Penterman, who in 2015 received the Wisconsin Outstanding Young Farmer Award. “We only had one team member (at first), and these days we have 35 people on our plant that help every day to milk the cows, to help produce the cheese, to sell the cheese.”

Penterman developed a deep appreciation for cheesemaking over the years.

“Before I used to make cheese, I had no idea how much work cheese was,” she said. “So I have to confess, I would go to the store, I would pick up a piece of cheese and I would think, ‘Wow, that’s a lot of money.’

“Now I go to the store, pick up a piece of cheese and think, ‘That’s not enough money.’ So I think education is very important. That’s why, again, everywhere we have windows (at their Thorp facility). We want to contribute a positive image to the dairy industry, but we also want to tell people what we’re doing. Transparency is very important.”

And so is staying true to their roots.

Penterman said they haven’t explored producing any cheeses other than Gouda.

Penterman said the sky’s the limit regarding opportunities for selling Gouda.

“Don’t tell everybody,” she said, “but I kind of want to take over the Gouda world, little bit by little.”

Marieke Gouda is at 200 W. Liberty Drive, Thorp. For more information about the business, call 715-669-5230 or visit www.mariekegouda.com.