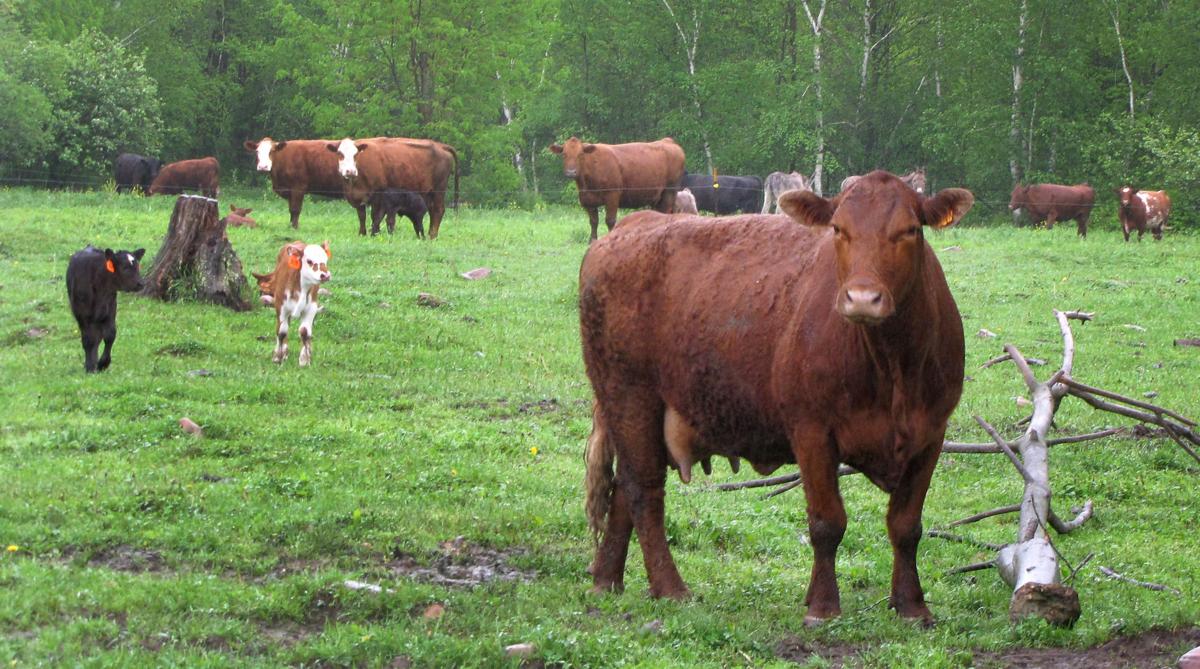 Cattle roam the pasture at the Lyons farm just north of New Auburn. The Lyonses have about 90 cattle, including 40 raised for beef production. 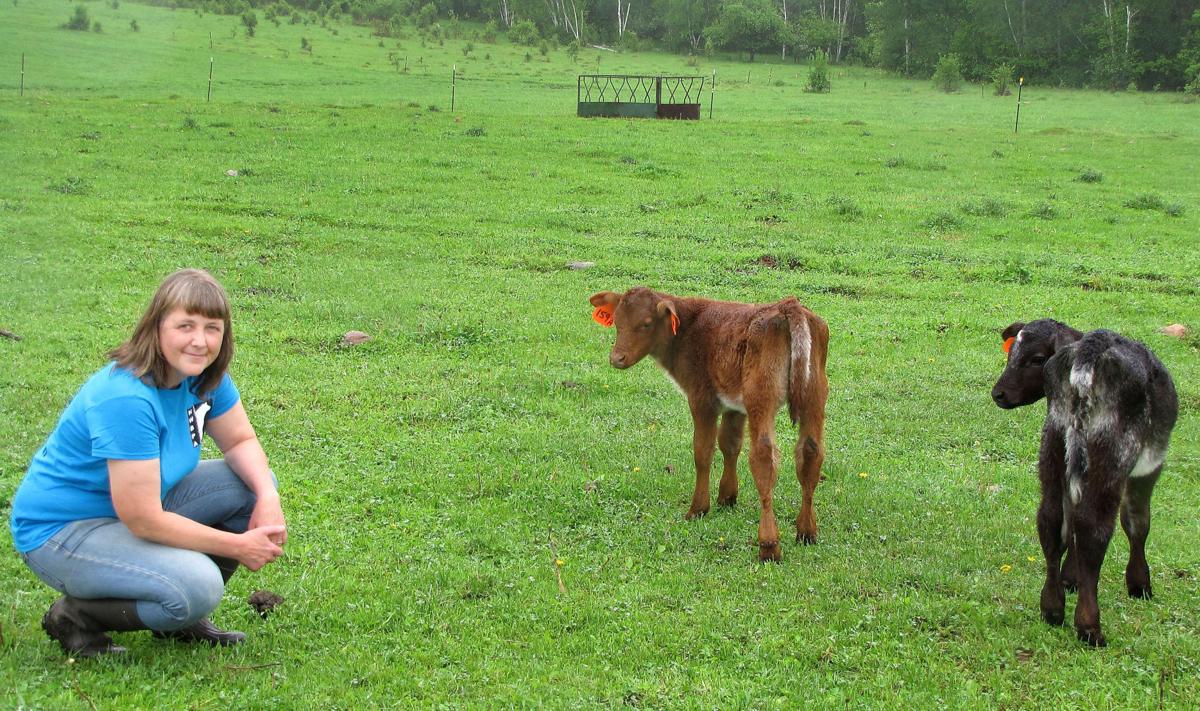 Lori Lyons checks on two newborn calves on her farm. The Lyonses have raised beef cattle since they purchased the farm 28 years ago. 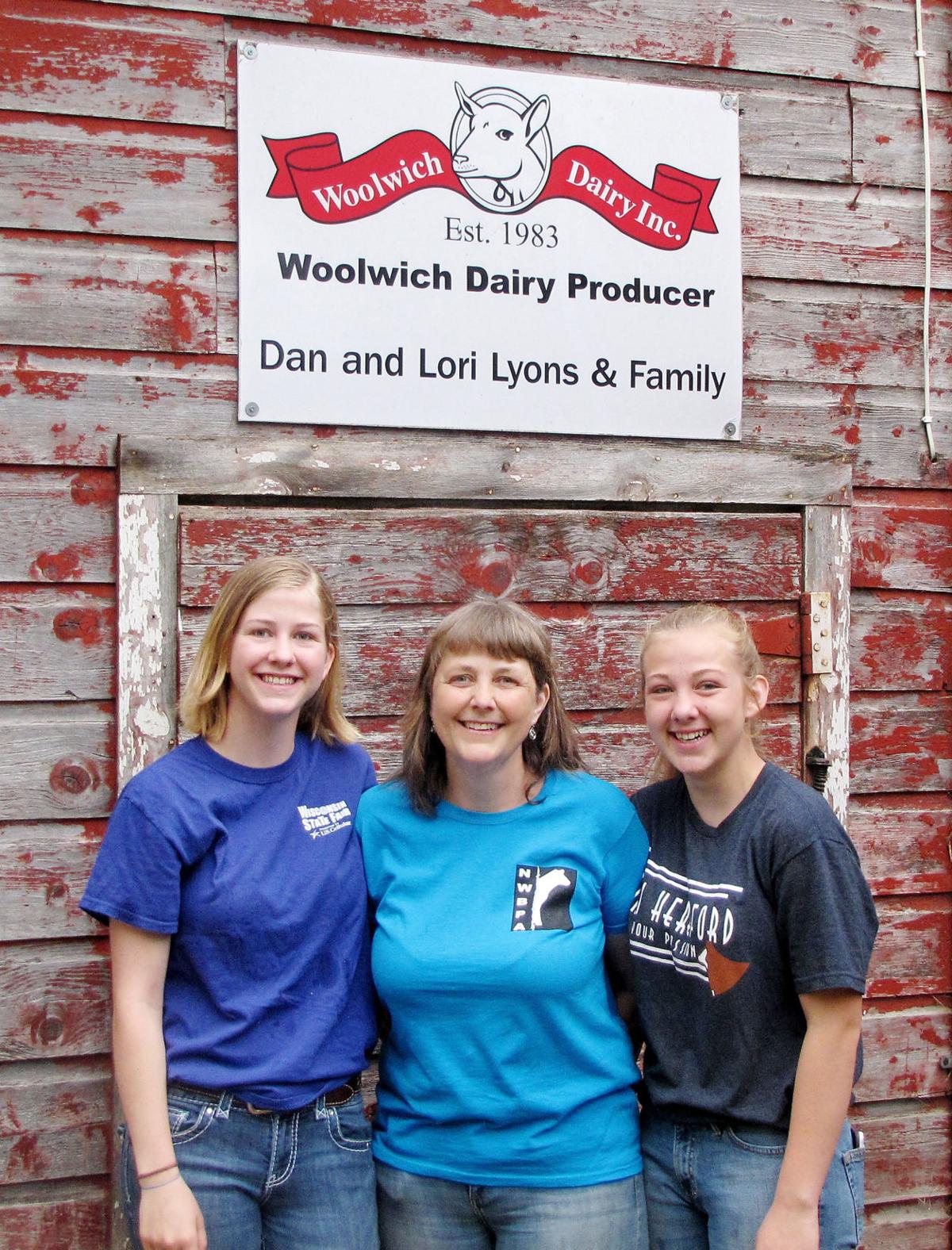 From left, 18-year-old Jamie, Lori, and 14-year-old Julia Lyons pose outside their barn in New Auburn. Each of the Lyonses’ six children had daily chores on the farm, along with doing their homework.

Cattle roam the pasture at the Lyons farm just north of New Auburn. The Lyonses have about 90 cattle, including 40 raised for beef production.

Lori Lyons checks on two newborn calves on her farm. The Lyonses have raised beef cattle since they purchased the farm 28 years ago.

From left, 18-year-old Jamie, Lori, and 14-year-old Julia Lyons pose outside their barn in New Auburn. Each of the Lyonses’ six children had daily chores on the farm, along with doing their homework.

NEW AUBURN — Many farmers who raise cattle in the Chippewa Valley use them in the dairy industry. However, for nearly three decades, Dan and Lori Lyons have raised beef cattle on their farm north of New Auburn in Barron County.

The Lyonses have 40 mature beef animals. They raise the cattle for roughly the first seven months after birth, then they are sold to a larger operation each fall, where they’ll grow for another year before being slaughtered.

Lori Lyons grew up on a family farm south of Eau Claire.

“I grew up with beef cattle,” Lori Lyons said. “I never milked cows. My parents had a small hobby farm with 15 beef cattle.”

Overall, the Lyonses have about 90 head of cattle, including the newborns and replacement heifers, and are involved in the promotion of beef cattle. She serves on the Northern Wisconsin Beef Producers Association board.

At one time, they had 100 mature beef cattle, but ultimately decided that was too challenging.

“Our farm is 170 acres. That’s a common size in the New Auburn area,” she said. “You can only put so many cattle on land.”

So, for years they rented additional farmland, but that meant making sure water, fencing and corrals were available at each site.

The COVID-19 pandemic isn’t helping her farm, she added. Because some meat processing plants are shut down or have reduced staffing, some animals that were slated to be processed haven’t gone to market yet, she explained.

“There is a problem with the supply and demand right now,” she said. “If there are a lot out there, you are getting low prices.”

The Lyonses delayed selling two older cattle at this time.

“I’m hoping things will be straightened out by the fall, when we normally sell,” she said.

The Lyonses have six children, including 18-year-old Jamie and 14-year-old Julia, who still live at home. Their oldest son, 28-year-old Alex, works full-time on the farm. Everyone is required to pitch in on farm chores every day.

“It’s been a family effort,” Clark said. “The kids are all in 4-H and showed cattle at the Northern Wisconsin State Fair.”

Clark said there are just a few small beef operations in the county, but he sees that becoming a growing industry.

“We’re slowly moving in that direction,” Clark said. “We’re seeing more of it. It’s always been a dairy area. You need to have an outlet (for finishing). Usually, the cattle have to leave the area to be processed.”

Lyons said they have learned to be somewhat detached from the animals, saying they never give names to the steers.

“You feed them, you take care of them, but you don’t show them (at fairs),” she said.

At the same time they made the decision to reduce from 100 mature beef cattle to 40 animals, the Lyons family added a large goat-milking operation.

The Lyons family milks between 120 and 140 goats on their farm. Currently, they also have about 300 newborn goats, as the birthing season is usually in April and May.

Milk is picked up twice a week, on Mondays and Thursdays. On a recent three-day stretch, the goats generated 3,300 pounds of milk.

The milk is sold to a company that will produce soft goat cheese. Just like COVID-19 affecting beef prices, Lyons is now concerned that a volatile economy will lead to reduced sales of artisan cheeses, which would drive down the price she is receiving for goat milk.

“This is our 10th year of milking goats,” she explained. “We spent four, five months just researching goats.”

They constructed a parlor on the barn, where 24 goats can be milked at a time.

With 300 births every spring, Lyons said she keeps 20 to 30 females to replace older dairy goats. The rest are sold.

“We have high-producing goats,” she said. “So, people really want them. I have contracts for them, sometimes a year or two in advance. The buck kids, I sell them as quickly as I can, because they are work for me.”

Clark, the UW-Extension agent, praised the Lyonses for opting to add the goat milking operation.

“They were looking to diversify and be innovative,” Clark said.

Lyons said being a farmer definitely has its challenges, saying it’s hard to have much of a social life.

“It’s very hard for young people to get into farming because of the cost,” she said.

Farmers are always concerned about the cost of feed or things out of their control, like shifting weather patterns.

“In June, we’re looking at December. Farmers are always looking ahead,” she said.