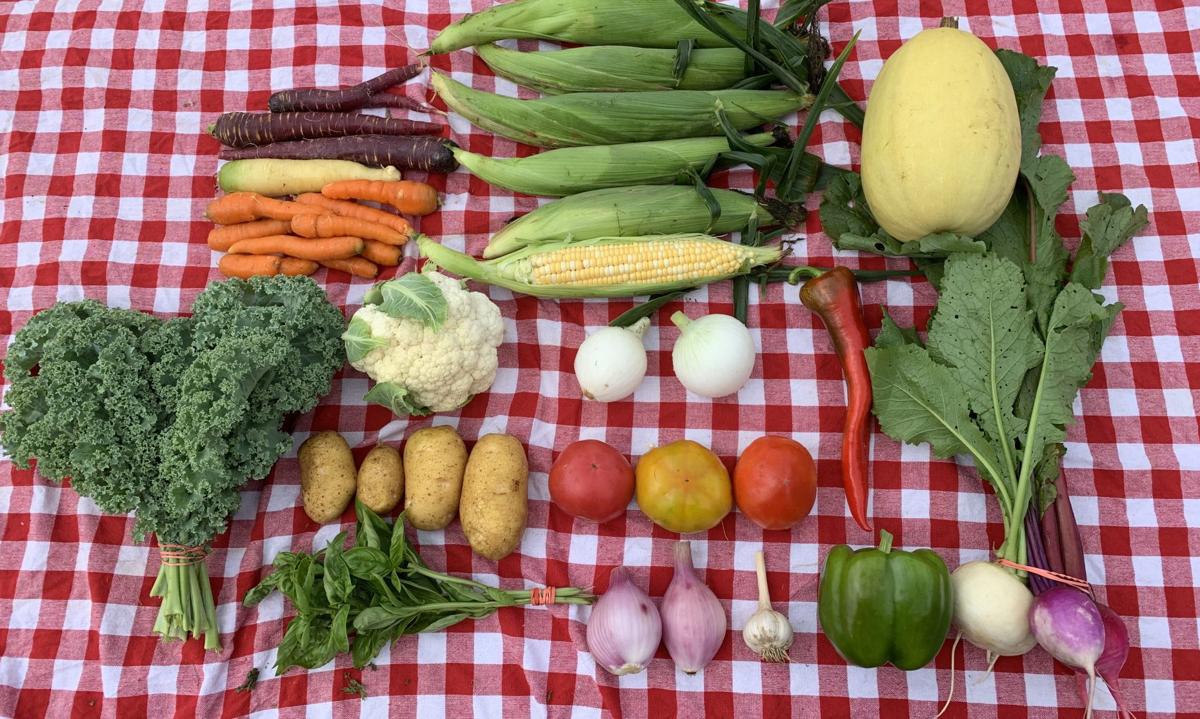 CSAs provide a reliable source of assorted produce, such as this from Cattail Organics in Marathon County, to members during the growing season. 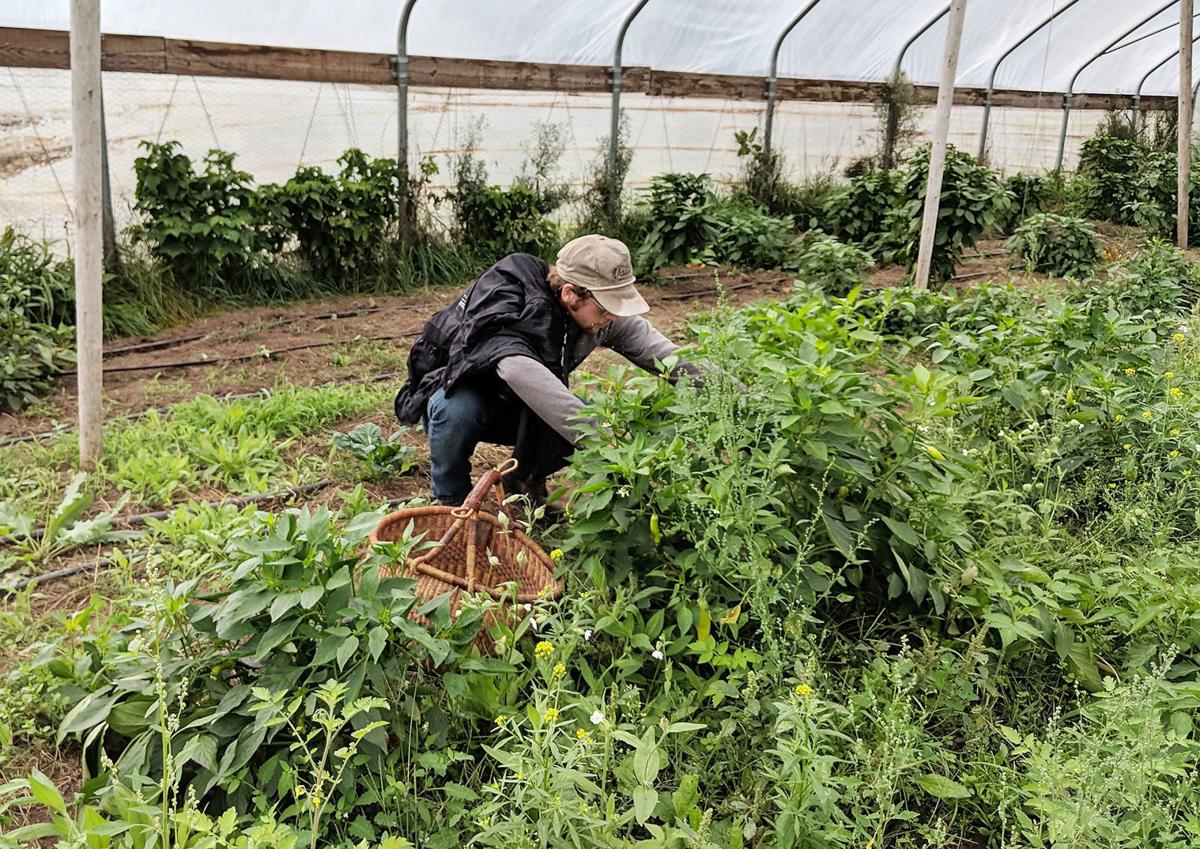 Worker CSA shares at Lonely Oak Farm in Milladore allowed owners to pick peppers from one of the farms greenhouses.

CSAs provide a reliable source of assorted produce, such as this from Cattail Organics in Marathon County, to members during the growing season.

Worker CSA shares at Lonely Oak Farm in Milladore allowed owners to pick peppers from one of the farms greenhouses.

With many concerned about the security of the U.S. food supply chain as COVID-19 continues to spread, the local food movement has increasingly been in the spotlight.

That goes too for farms offering community supported agriculture, which saw heightened demand when stay-at-home orders went into place, causing many CSAs to sell out of shares weeks ahead of schedule.

Cattail Organics near Athens in Marathon County; Oxheart Farm near Hager City across the river from Red Wing, Minn.; and Raleigh’s Hillside Farm near Evansville in southern Wisconsin each sold out of their shares of produce for this growing season well ahead of schedule, and they’re far from alone.

“There is so much to love about CSAs, and these factors are just underscored by this pandemic,” said Carrie Sedlak, executive director for FairShare CSA Coalition, noting that farmers are adapting in a variety of ways to the COVID-19 pandemic.

Still, despite many farms expanding their CSAs from the previous year or allowing more members to join this season than they initially intended, there’s more interest than most CSA farms can satisfy.

“There’s absolutely more demand than we could meet,” said Lauren Rudersdorf of Raleigh’s Hillside Farm, which typically delivers to 400 customers but still sold out of shares a month earlier than usual.

Contributing to that demand increase is an influx of new CSA members.

“Once the state shut down, people started joining CSAs who hadn’t been in CSAs traditionally,” said Kat Becker, who offers a three-season CSA at Cattail Organics and regularly delivers 80 boxes a week among 125-135 shareholders during the main season.

With the surge in interest from COVID-19, now is CSAs’ “time to shine,” said Emmet Fisher of Oxheart Farm.

For many of those new members, this year might be their first experience working within the CSA model, which sees boxes of seasonal produce provided to shareholders for pick up on a regular basis (weekly, every other week, etc.) at neighborhood sites or the farm itself during the growing season.

Some new names this year may also be former CSA members who have decided to rejoin one or regular farmers’ market attendees deciding to take their support of local farmers to another level.

While the increase in interest can be a boon for CSA farms, especially for those who are able to convert at least a small portion of wholesale that might otherwise go to currently shuttered restaurants to CSA shares, farms also want to make sure that new CSA members know about the investment they’re making upfront and are sure that CSA is the right fit for them.

Some people find that they love the way CSAs are set up and the variety of produce they get over a season, Becker said, while others find the concept more challenging to work within.

Claire Strader, organic produce educator for FairShare CSA Coalition and UW-Extension Dane County, said that while she thought it was great that a lot of new members were coming to CSAs, there are several reasons why it might not be right for someone, not the least of which is cooking ability. While some CSAs allow a degree of customization of their boxes, produce at a given time is still typically limited to what is in season, and if someone doesn’t have the skill or interest to be able to cook with the assorted produce that they’re given at a particular time, they might find that the CSA model doesn’t suit them.

Farms in turn try to provide the education they think their shareholders, new or returning, need to have a successful CSA experience, including offering recipes, previews of what CSA members can expect in a given delivery, farm updates and individual advice as needed. FairShare CSA Coaltion also provides resources for those interested in learning more about CSAs on its website, csacoalition.org.

Rudersdorf, who not only offers several avenues of engagement for their shareholders but also a podcast and class for farmers interested in starting a CSA, said that for CSA members, it’s important to “learn what your farmer’s language is” as well.

Strader said that some of the appeal of CSAs for new shareholders this year is that getting CSA boxes has traditionally been a socially distant process, which can be an attractive option in the midst of COVID-19.

Most CSA produce is delivered to drop sites throughout neighborhoods, such as grocery stores or residences that open their porches or garages as a pick up site, or available for pick up at the CSA farm itself. Boxes of produce can often simply be set out ahead of a scheduled pick up time, and shareholders can show up, pick up just their box, and indicate receipt of their box on a check off slip, with little to no face-to-face contact.

Even though the typical method of delivery of CSA shares already aligns closely with social distancing guidelines, many CSAs are still taking extra steps to fully ensure the safety of their customers.

At neighborhood sites, CSAs are testing options such as providing longer pick up hours, encouraging one person at a pick up spot at a time, trying different ways to avoid sharing pens when checking off receipt of boxes, and offering hand sanitizer, among other things to further reduce physical contact and closeness.

For Oxheart Farm, which has on-farm pick ups, they’re considering many options, including having hand sanitizer or hand washing stations, requiring masks or requiring shareholders to pick a specific time slot to avoid any crowding, as they continue to see how their current spring share distribution, which has operated similarly to a drive-thru, works before the main season begins in June, Fisher said.

Some farms have also started offering home delivery, especially aimed at populations that are more vulnerable to COVID-19.

“Farms are really talking a lot with each other about how to develop those systems,” Strader said.

But becoming a part of a CSA is about much more that just having a reliable way to get produce in a time where local supply chains are being particularly counted on as many voice concerns about the stability of the food supply chain nationwide.

For Fisher, joining a CSA may be better described less as food security and more so as food sovereignty because the model creates “an investment in ownership by the people who are consuming the food.”

When customers are truly invested in the farm, they become more than just customers, Fisher said.

The shared risk of CSAs — when the farm does well or not as well, so do shareholders — is a defining principle of the model that benefits from having strong relationships between both parties.

As bad and good years balance out over time, Rudersdorf said, it provides an opportunity to further encourage long-term investment from members.

The relationship goes beyond that shared investment, though.

Whether it be in-person conversations during an on-farm pick-up; socializing at an on-farm event for shareholders; calling or emailing for information or advice; or reading emailed newsletters, farm updates and recipes, there are often many ways for members to engage with the CSA farmers.

“These elements create a strong bond between a CSA member, their food, and the family that grows that food,” Sedlak said.

Those bonds are a large part of what keeps CSA members like Lindsey Buscher, who is a member of Raleigh’s Hillside Farm’s CSA and its core team of members, invested in the farm year after year.

“As soon as we learned about what it means to be a CSA member, it quickly became an essential part of our lives and how we wanted to raise our two boys,” Buscher said.

“I love that we have been able to develop such a wonderful friendship with our farmers and the community that they (especially Lauren) have worked so hard to build and nurture and expand year after year,” she added.

Those connections, especially as customers become more invested the longer they are a part of a CSA, are mutually beneficial.

Sedlak said, “The contents of a CSA box are grown with incredible care and when you buy from a CSA you support your local economy in a powerful way, while also literally helping to ensure that small, local farms can survive and thrive.”

Rudersdorf added that as a farmer, it has been “really wonderful” to be able to build those kinds of relationships with CSA members over time.