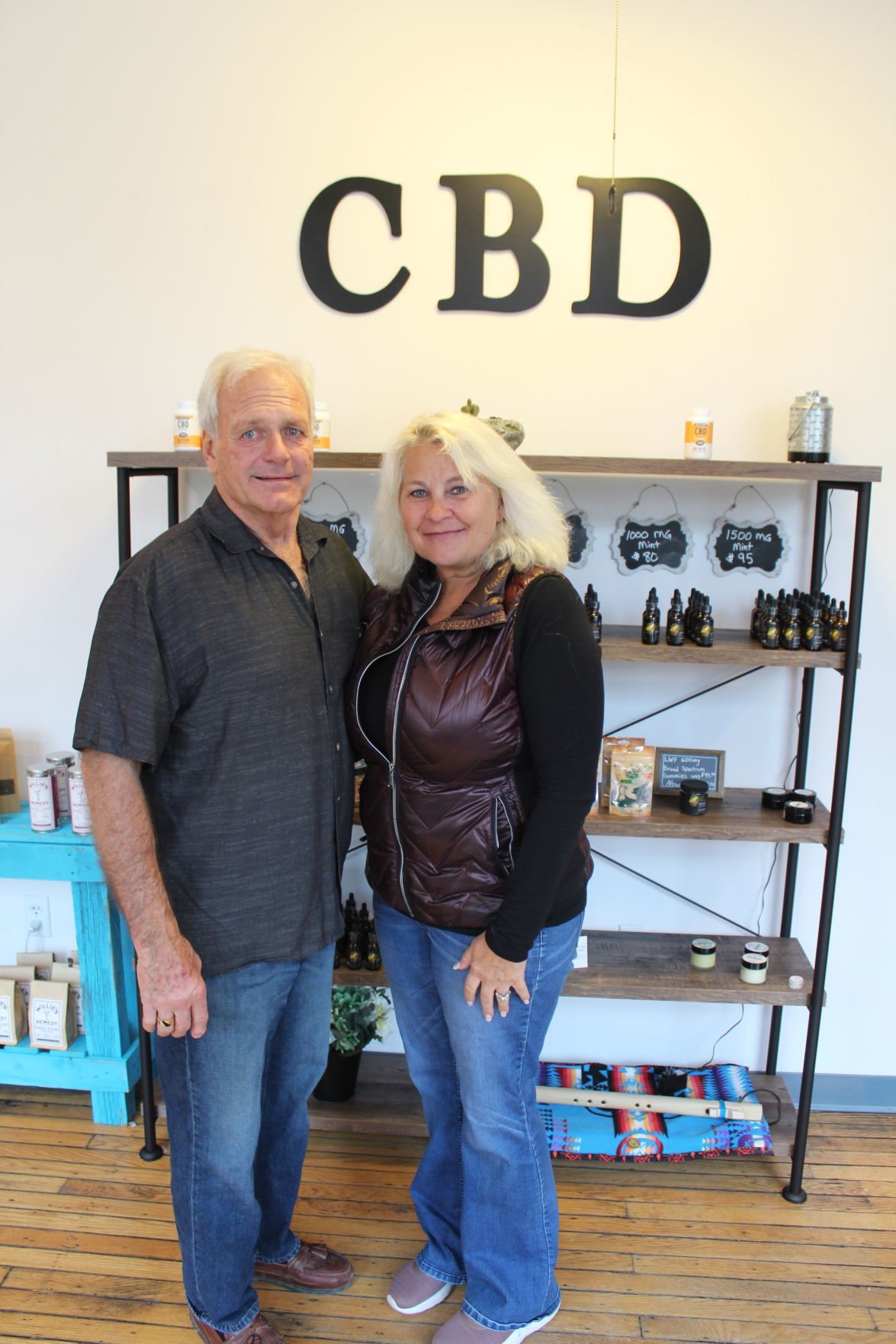 Jim Tibbetts and Dori Zimmerman own and operate Little Wolf Farm CBD, a retail store in Mineral Point that sells CBD products. The majority of the products at their retail store are made with CBD oil from their hemp farm outside of town. 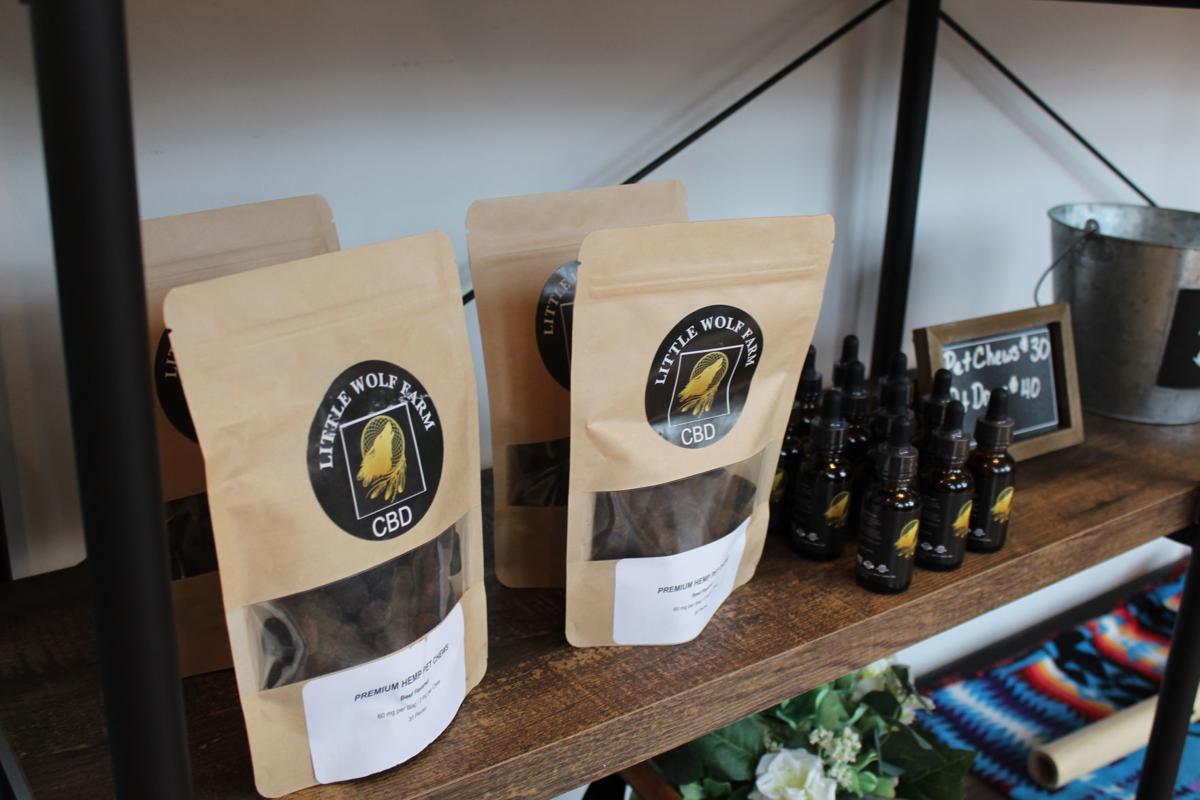 Pet treats are one of the more popular products that are sold at Little Wolf Farm CBD. 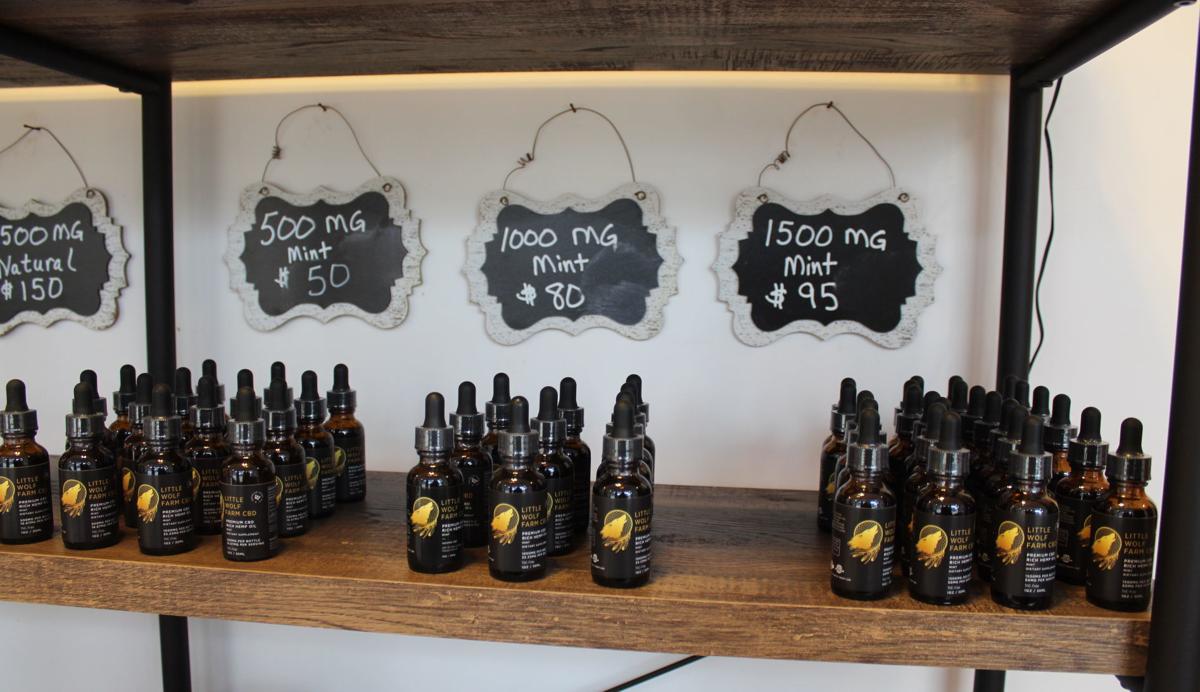 Various tinctures and oils are also popular at the CBD store in Mineral Point. 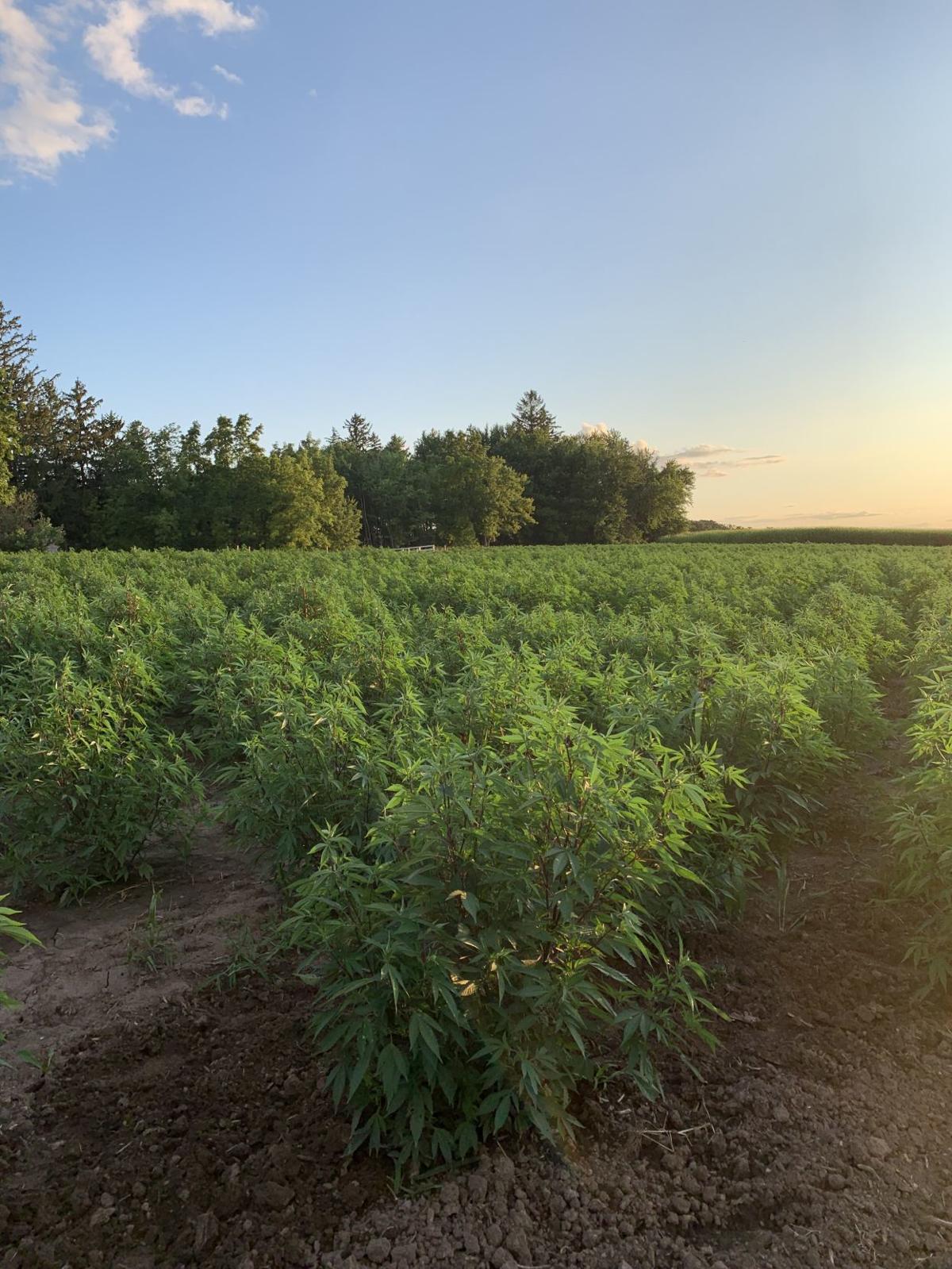 Tibbetts spent a lot of time in the fields this past summer, tending to three acres of hemp near Linden. 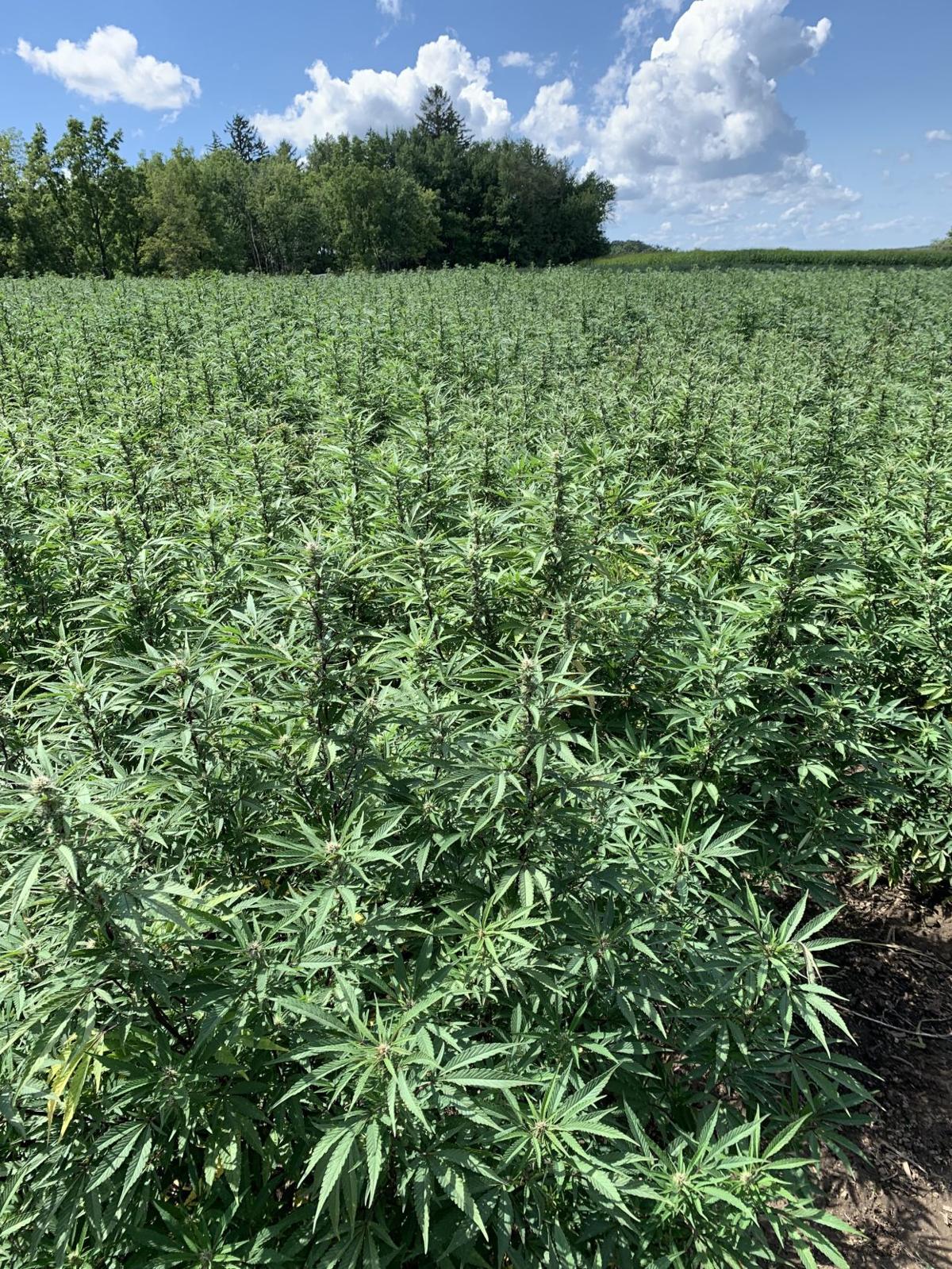 Zimmerman and Tibbetts grew three acres of hemp, along with a greenhouse, this past summer. Using a processor in Plymouth, they now sell their own branded CBD products derived from the hemp grown on their farm.

Jim Tibbetts and Dori Zimmerman own and operate Little Wolf Farm CBD, a retail store in Mineral Point that sells CBD products. The majority of the products at their retail store are made with CBD oil from their hemp farm outside of town.

Pet treats are one of the more popular products that are sold at Little Wolf Farm CBD.

Various tinctures and oils are also popular at the CBD store in Mineral Point.

Tibbetts spent a lot of time in the fields this past summer, tending to three acres of hemp near Linden.

Zimmerman and Tibbetts grew three acres of hemp, along with a greenhouse, this past summer. Using a processor in Plymouth, they now sell their own branded CBD products derived from the hemp grown on their farm.

MINERAL POINT — About 15 years ago, Dori Zimmerman and her son, Zachary, were living in Kansas and watching a documentary on the Emerald Triangle, a region in northern California that has gained attention for being the largest cannabis-producing region in the United States. At that time, several states had legalized medical marijuana, and the two discussed plans to grow medical marijuana together as a business.

Today, Zimmerman, along with her partner Jim Tibbetts, now own and operate Little Wolf Farm CBD, fulfilling a dream that started all those years ago. And although a tragic accident took the life of Zachary in 2015, Zimmerman honors her son each and every day in multiple ways.

The name of their farm and their business, Little Wolf Farm, is dedicated to Zachary, a nod to his Potawatomi heritage and his Indian name, which translates to “Little Wolf.” A portion of proceeds from the CBD business also go into a scholarship fund in Zachary’s name, which has helped send area high school students abroad for the past three years.

“Zach is one of the reasons we’re in this business,” she said.

Zimmerman, who grew up in southwest Wisconsin, met Tibbetts in Florida, where the two were living just a few years ago. When Zachary passed away, the couple moved back to Wisconsin. Tibbetts expressed his ambitions to get back to a farm, recalling his time as a youth on his family’s diversified grain farm in South Dakota.

“My passion was to come back to the farm,” he said. “And when Wisconsin introduced their hemp pilot program (in 2018), it really caught Dori’s interest.”

Zimmerman did a lot of reading and research, accessing any information on hemp that she could get her hands on. She took a special interest in the medical benefits of CBD and how CBD could be used to treat arthritis, seizures, insomnia, anxiety and more.

The couple also did a lot of networking, attending various farmer meetings and connecting with others growing hemp; it was how they found a processor to take their hemp and process it into CBD oil.

“It was really important to us to meet people and get set up,” Tibbetts said. “We really enjoy networking with others farmers too.”

With Tibbetts’ interest in farming and Zimmerman’s interest on the retail side, the couple decided to apply for their growing license through the Wisconsin Department of Agriculture, Trade and Consumer Protection, growing and harvesting their first crop in 2019. They had a little over three acres growing at Zimmerman’s parents’ land outside of Linden and another greenhouse with plants at their hobby farm outside of Mineral Point.

At the time, they were the only people they knew growing hemp in the immediate area. The person they bought their initial cloned hemp plants from told them they were one of the their first customers too.

Tibbetts and Zimmerman decided to start their hemp business with clones purchased from a grower in Wisconsin. Although it is more expensive than buying hemp seed, Tibbetts wanted to minimize the risk involved and reiterated that every farmer is different in their choices.

All summer, the couple tended to the hemp plants, with Zimmerman teasing how they had names like “the girls” or “the ladies” for their crops. Tibbetts said he could even recognize some plants individually.

While the soil and drainage were excellent on the farm, allowing for the crop to grow well, Tibbetts did run into some issues with hemp borers outside and aphids inside the greenhouse. Surprisingly, cottontail rabbits also helped themselves to some of the younger plants as they began to grow earlier in the year.

“It takes a lot of time and attention. You’re out amongst the plants and doing the hands on work,” he said.

Then came time for harvest, something Tibbetts called “a big job” that takes a lot of manual labor and extra hands to complete. Once harvested, the plant needs to dry for 10 to 14 days in an adequate area. Tibbetts and Zimmerman used several barns to dry their crop before it was run through a stripper, put into totes and delivered to the processor in Plymouth, who processes the oil from the biomass of the hemp plant.

Back in Mineral Point, Zimmerman has been working with a chemist to develop new products from the CBD oil, processed directly from hemp plants at their farm. It took an entire year for Zimmerman to determine which types of products to offer, with their store on High Street now carrying popular products such as hemp flower, oils, tinctures, salves, pet treats and more.

“The end goal is to have Wisconsin grown oil and put it into Little Wolf Farm products,” she said. “We’re big proponents of support local and aim to make products that are unique to the store and for those who we wholesale to.”

Little Wolf Farm products are not only sold at the store in Mineral Point, but also at a salon in Livingston, a nutrition store in Platteville, and two gas stations in Linden and Montfort. They just recently added a fitness business in Dodgeville to their list of wholesalers too.

“We’re very proud of the products,” Zimmerman said, adding that it’s one of her personal goals to get into the Madison market with Little Wolf Farm products.

She has other goals for Little Wolf Farm in 2020 as well, including incorporating some different plant varieties and CBG, another non-psychoactive cannabinoid found in low-THC, high-CBD hemp strains.

For Tibbetts, who focuses more on the farming side of the business, he, too, would like to grow different varieties for Zimmerman but also wants to see an improved crop in 2020 as some of last year’s crop was lost due to weather and pests.

“We’re working hard on the farming aspect,” he said. “The first year was experimental, and we’ll continue to learn and experiment with different varieties. We have a lot to learn yet.”

“But that’s where the fun and passion comes in,” Zimmerman said.

For those who may be interested in growing hemp, the couple also had this advice.

“Go smaller than bigger, don’t overcommit financially and make sure you have access to manual labor,” Tibbetts said.

He also recommended being very familiar with state rules and regulations and to make sure you comply with them, along with testing the crop once it starts flowering to make sure it is legal.

“And be sure to enjoy it,” Zimmerman said. “It’s a very rewarding and fulfilling plant to grow. Most of the people who grow it will tell you that.”