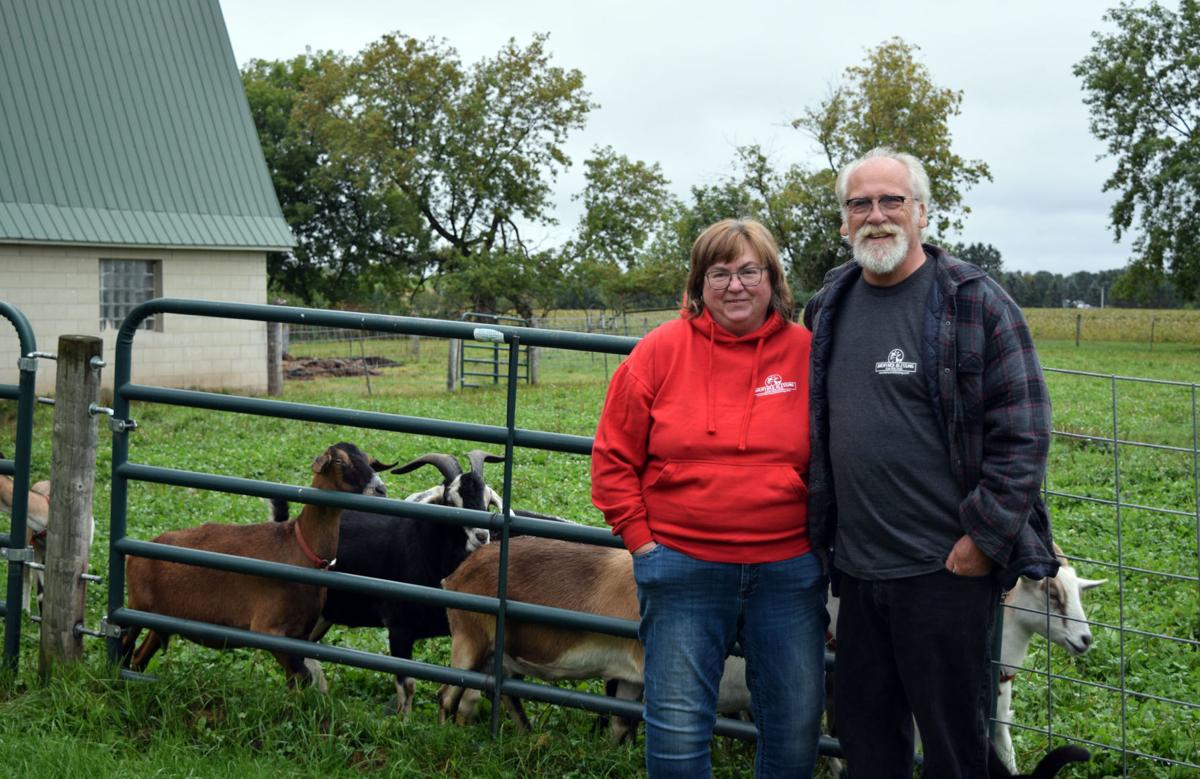 Don and Susie Stiver own Barnyard Blessing between Rice Lake and Cumberland. 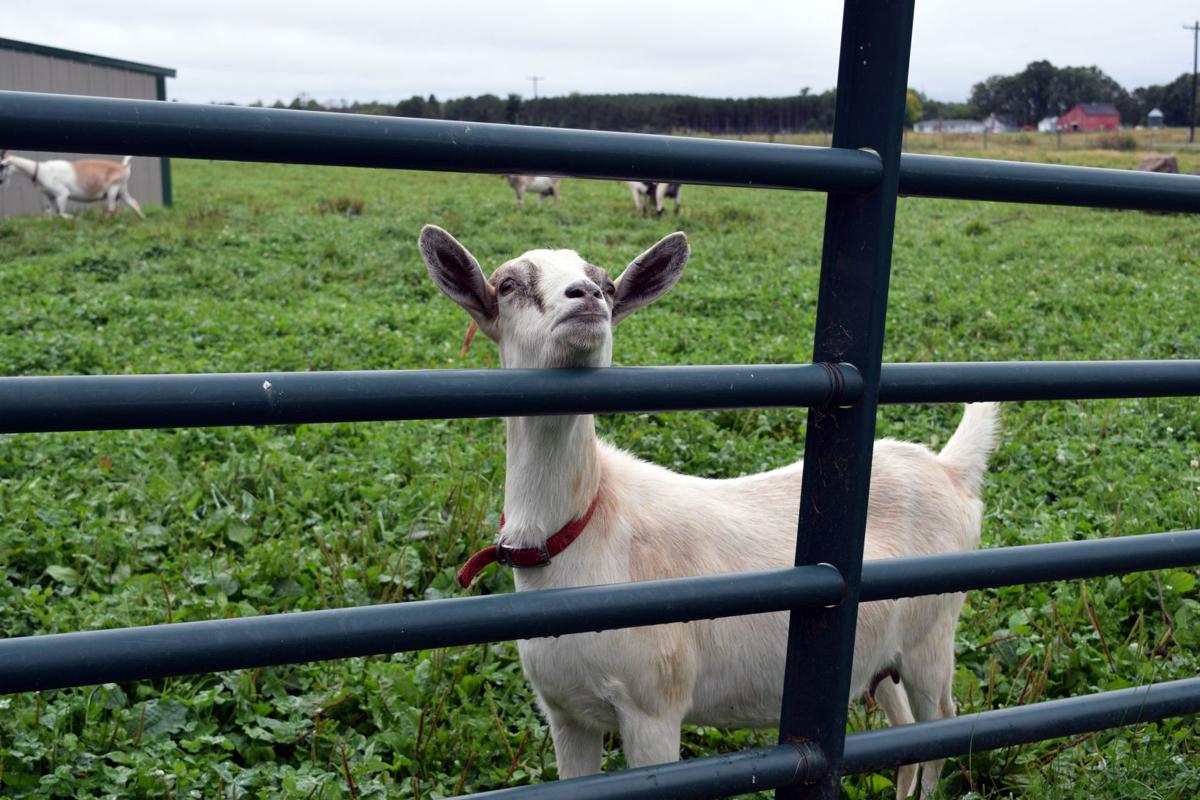 A goat looked through the bars of a gate. 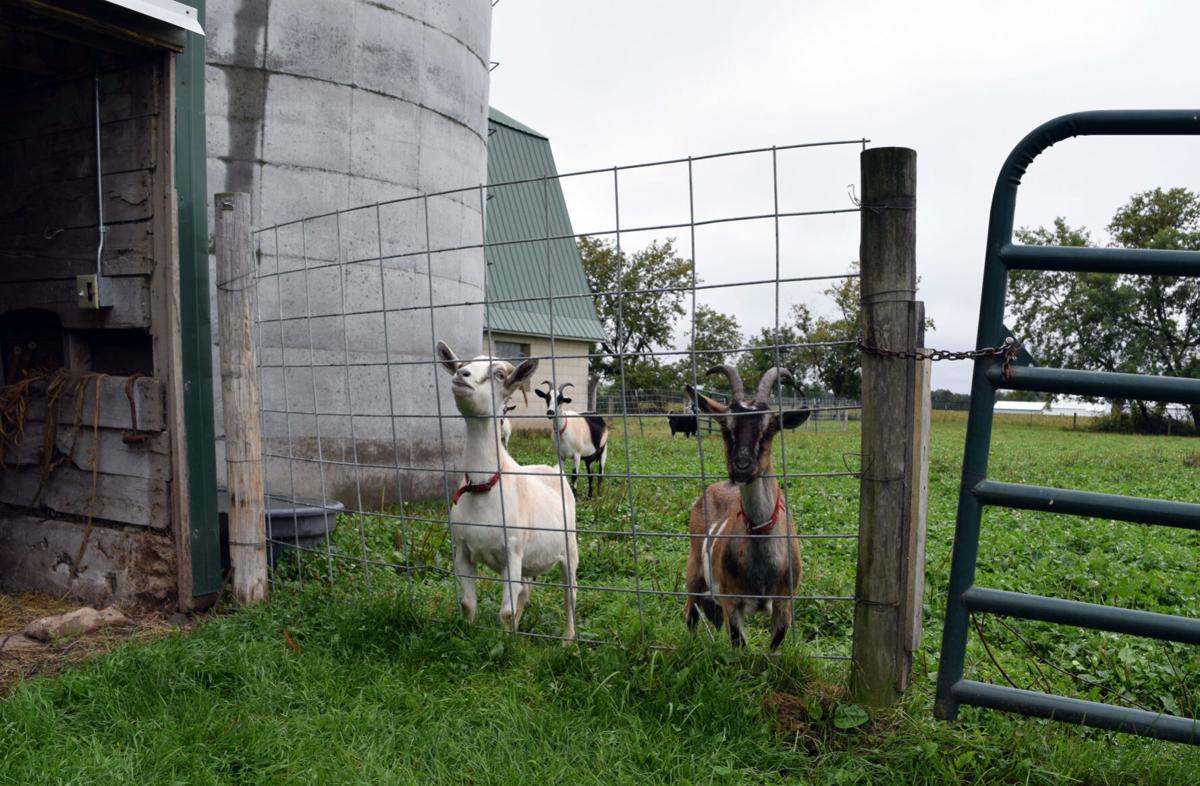 Goats stood by the pasture fence next to the barn. 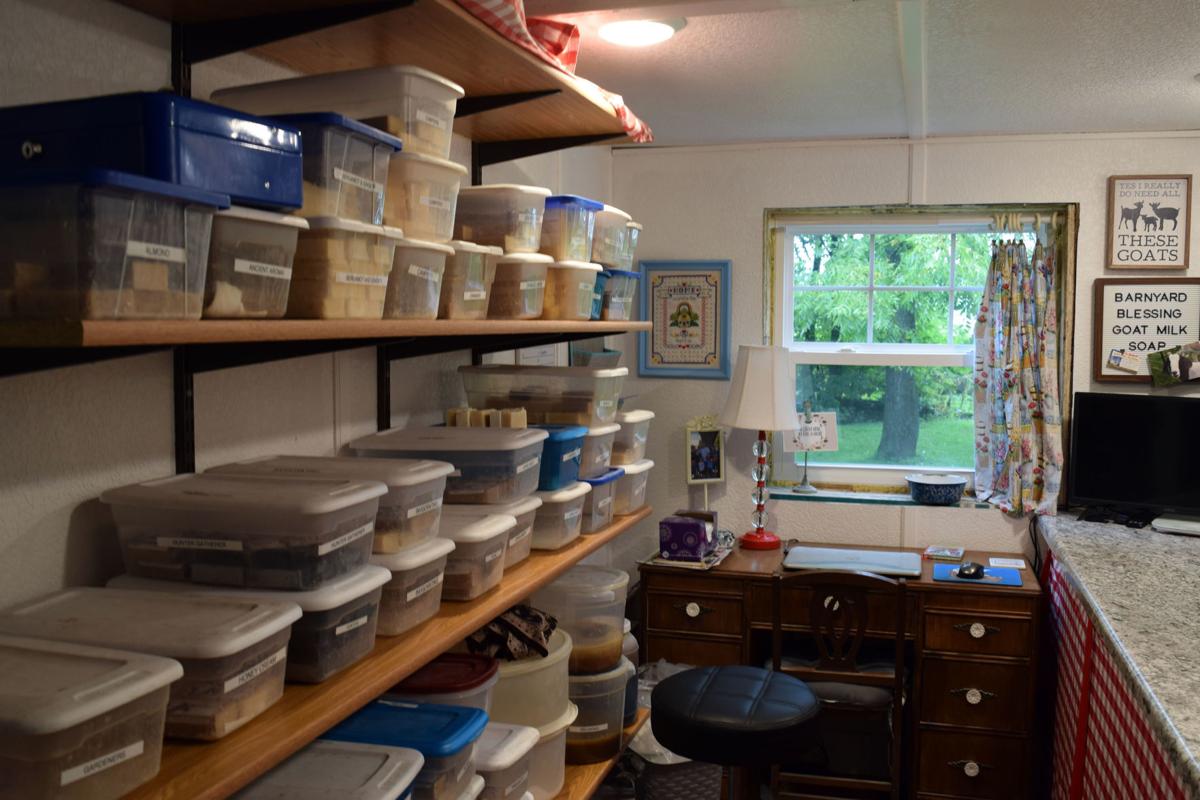 There is a dedicated space for soap making in the Stivers' house. 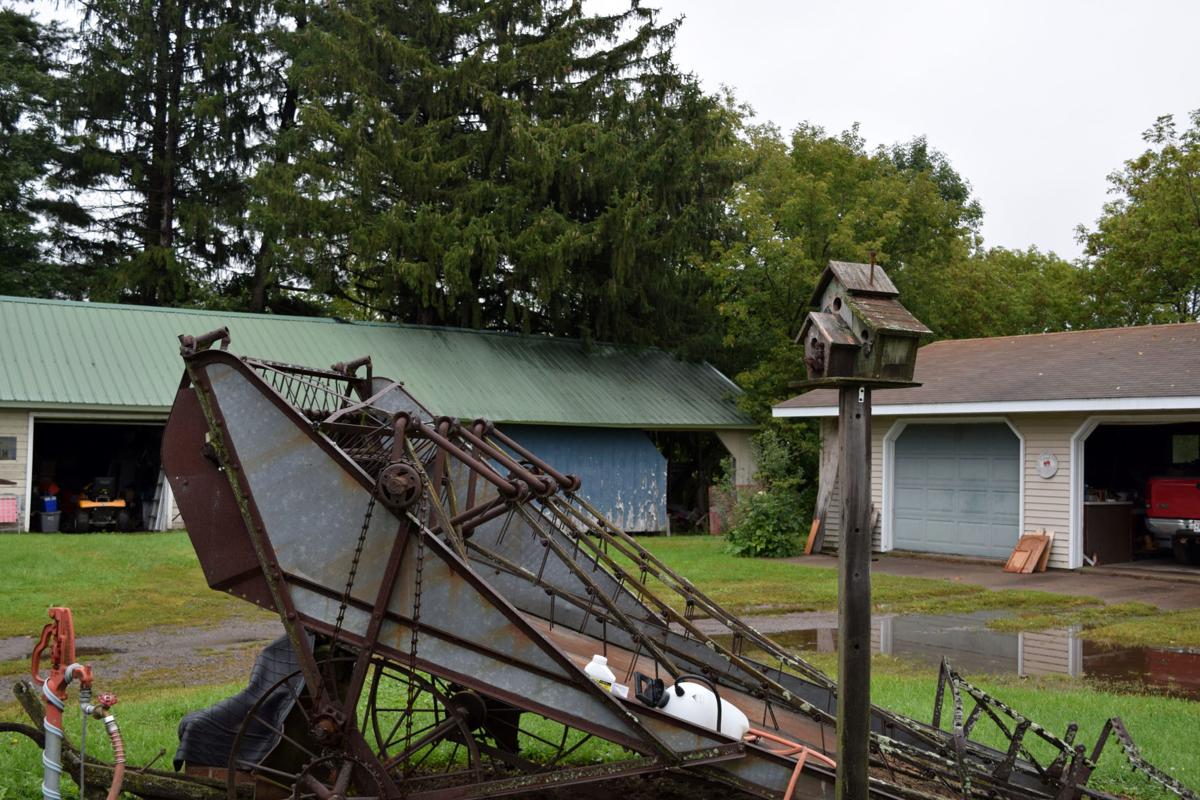 Don Stiver builds and sells birdhouses as well. Many of his creations, including the one pictured, can be seen around the farm.

Don and Susie Stiver own Barnyard Blessing between Rice Lake and Cumberland.

A goat looked through the bars of a gate.

Goats stood by the pasture fence next to the barn.

There is a dedicated space for soap making in the Stivers' house.

Don Stiver builds and sells birdhouses as well. Many of his creations, including the one pictured, can be seen around the farm.

RICE LAKE — The business between Rice Lake and Cumberland in northwest Wisconsin might be named “Barnyard Blessing,” but Don and Susie Stiver know the goats being raised on their farm are a little more complicated than that.

But while goats, who among other traits are known escape artists, and the business the couple runs can prove to be a lot of hard work, “we enjoy it,” Susie said.

The Stivers moved from California, where they had a small ranch where they raised meat goats and sheep, to Wisconsin in 2005. They wanted to utilize the farm they moved to but discovered that there wasn’t the call for goat meat in Wisconsin that there had been in California.

A friend from California had made goat milk soap, so the concept wasn’t a foreign idea, but the endeavor still took a lot of research and trial and error to begin, with the business starting out very small and very slowly.

Outside of the goat milk industry, the Stivers also make all-natural laundry detergent, and Don crafts birdhouses, each one unique in its own right, although styles may be repeated. Last year, the Stivers made over three tons of laundry soap, and over the last three-plus decades, Don said he has made thousands of birdhouses, some of which can be spotted on their farm.

As for their goat milk products, the Stivers say that there are several qualities to them that make them more unique.

Barnyard Blessing Goat Milk Soap primarily uses therapeutic-grade essential oils as opposed to fragrances (except for rose, due to its higher cost); replaces all water in the soap with goat milk, for a total of 1 to 1¼ ounces of milk per soap bar; and follows the philosophy of not putting anything in that doesn’t need to be there.

Don described both the soap and lotion as “very pure.”

Goat milk soap is soothing, nourishing and moisturizing for the skin, Susie said, crediting the vitamins, minerals and antioxidants in goat milk and the therapeutic effects of essential oils for the quality of their product.

The farm has seven does, a buck, 11 goat kids and “pasture pals” for their buck, who is kept separated from the females for most of the year. The Stivers plan to keep some of the baby does to replace ones who will be retiring in the next couple of years. The other kids will be sold.

The Stivers’ goats typically kid in March. An insistent buck this season means that next year’s babies will likely arrive in February, Susie said.

The goat kids are allowed to nurse for eight weeks, which allows them to bond with their mother and become more “well-adjusted” to go to a new home later, Susie said.

Don said allowing the kids to be with their mothers for that amount of time serves another useful purpose, too: when the Stivers take their annual spring craft show road trip, they only have to hire someone to feed the goats, not milk them, too.

The goats are milked once a day during milking season and only just as much as needed to provide the Stivers with enough milk — three freezers full — to make soap for a year to a year and half. The goats are also only bred once a year, as the Stivers believe a “season of rest” is important for the goats’ well-being, Susie said.

While the Stivers’ goats do ultimately serve the purpose of providing milk for the soap, the Stivers also see themselves as stewards of their animals, they said.

“It’s important to us to take care of what we’ve been entrusted with,” Susie said.

The couple is also active in the community, whether it is working with the Cumberland FFA, going into classrooms to talk about their goats or allowing people to bring their children out to the farm to see what it’s like.

Like it has for most people, the pandemic has brought challenges for the Stivers and their business this year. Normally, the couple sells their goods at 40 craft fairs, festivals and junk/vintage upcycle shows in several states during the year. This year, with so many cancellations happening, they’ve only had five.

Still, the shows they have been able to go to this year have gone fairly well overall, with the Stivers saying that only one wasn’t very good.

They’re thankful for the customers who have come out to the shows, sometimes driving long distances to do so, because if it weren’t for them, “it would be much harder than it already has been,” Susie said.

Helping to compensate for the lack of shows this year is increased online ordering through their website, www.barnyardblessing.com. They ship their products all over the country, they said. The Stivers also welcome customers to give them a call at 715-822-6301 to set up an appointment to stop by the farm to pick up an order or browse their selection.

While the pandemic was an unexpected challenge, raising goats and producing soap has always had a learning curve that the Stivers have had to and continue to adjust to over the years.

Since starting their business, the Stivers have found themselves doing a lot of education about goat milk, something people tend to be less aware of than cow’s milk, Susie said.

The awareness has grown somewhat in the state, though, particularly as goats have become more popular in Amish communities. Sometime years in the future, Don said, they foresee themselves as potentially turning to Amish farmers to buy the goat milk they’d need for their products in bulk and eventually get out of raising goats themselves.

Finding a vet to help care for their animals was something else more difficult to do for their goats. Goats aren’t exactly small animals or large animals, the two categories veterinarians are often classified as, Susie said.

Eventually the Stivers found a vet in Hayward, a town about an hour northeast of the farm, who is able to work with the goats. The Stivers have also done a lot of research to help them do their own doctoring when necessary.

But whatever challenges their business and goats might bring, the couple is dedicated to taking care of their animals and using them responsibly, Susie said.

“We consider this to be a gift to be able to do this business,” Susie said.