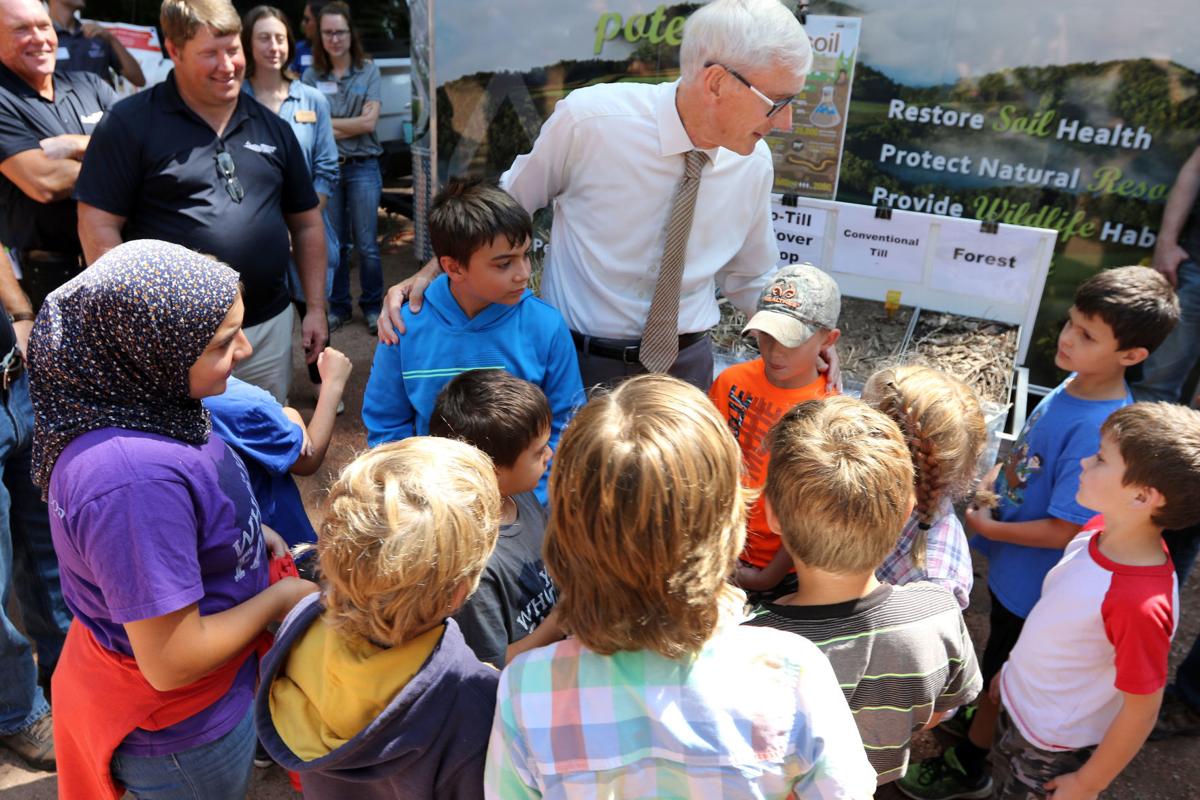 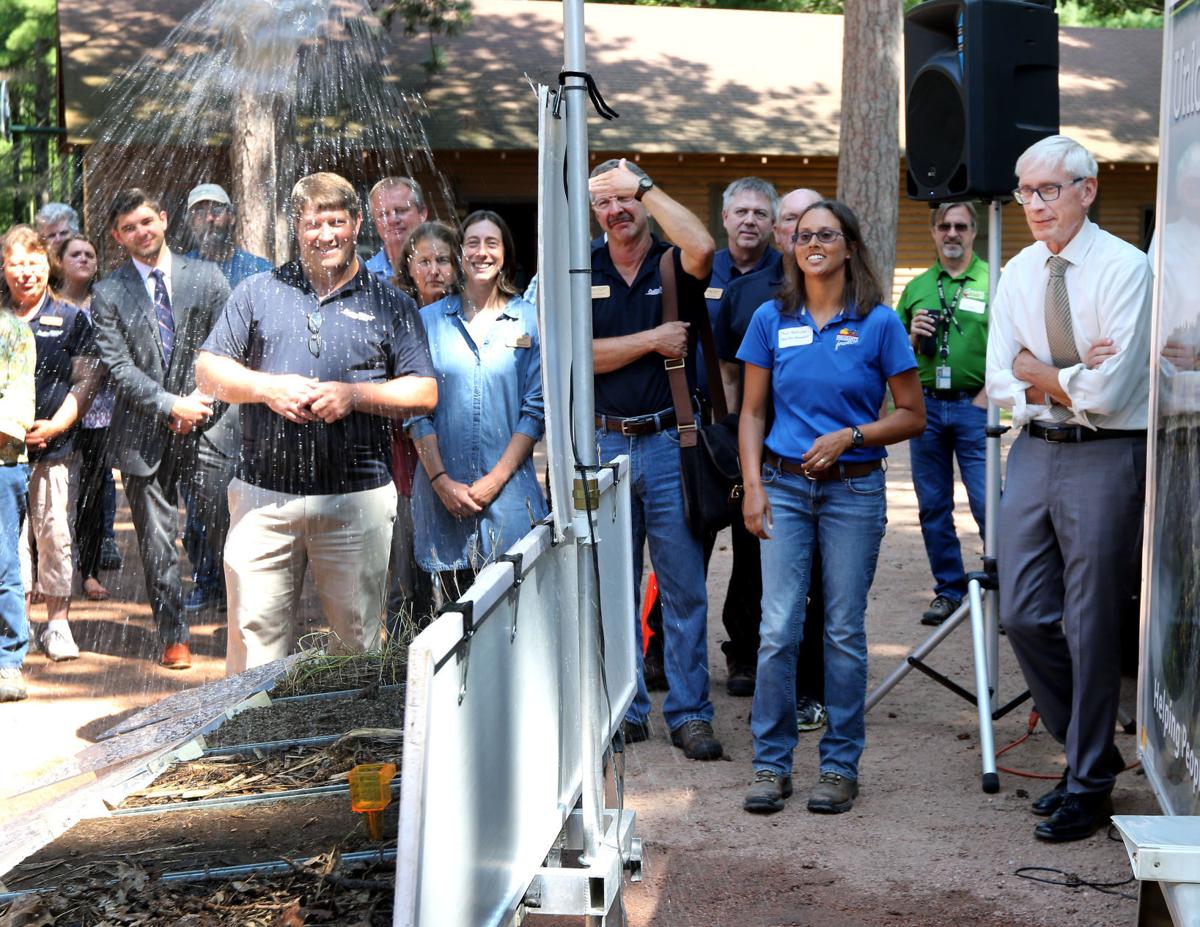 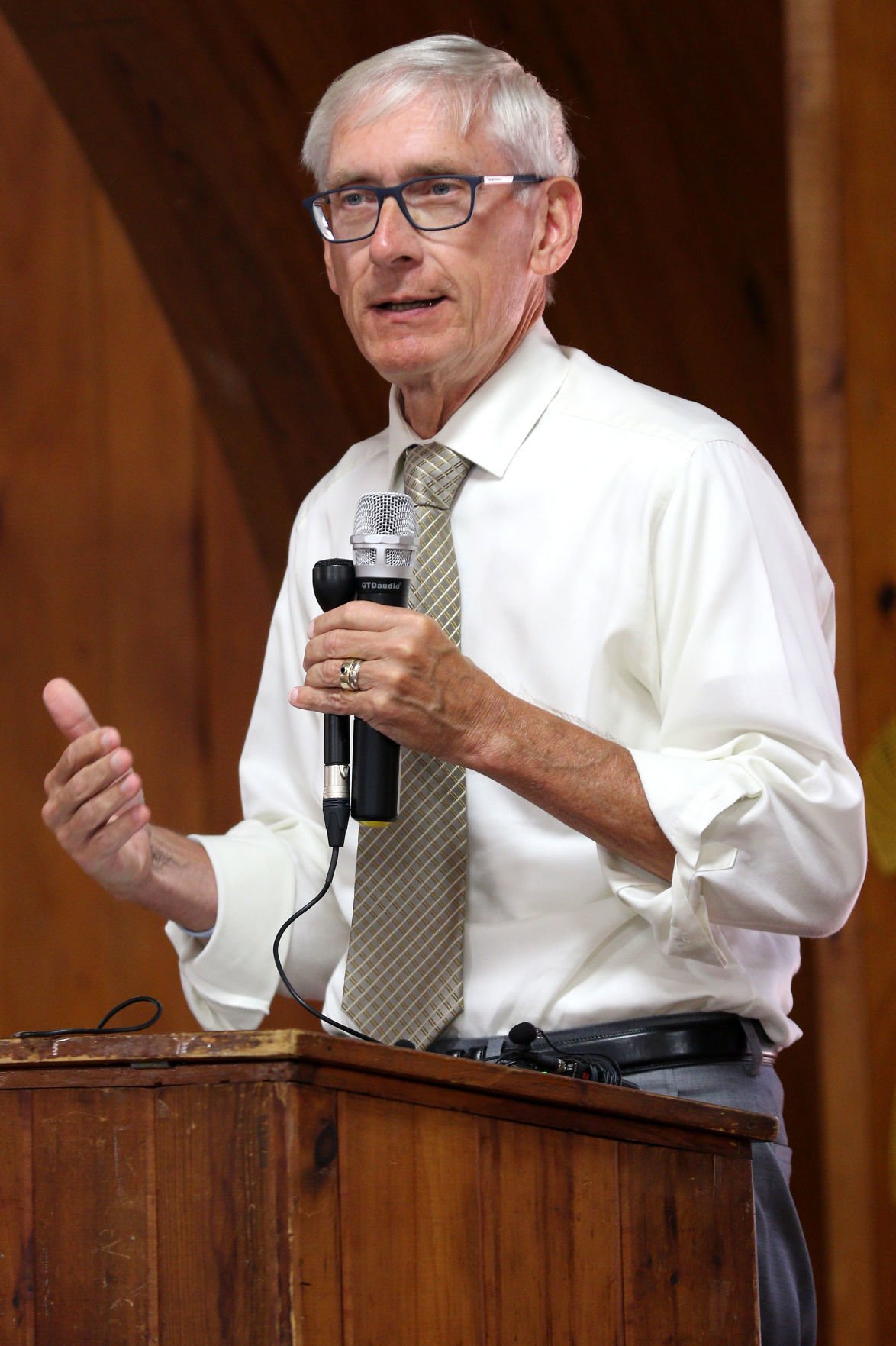 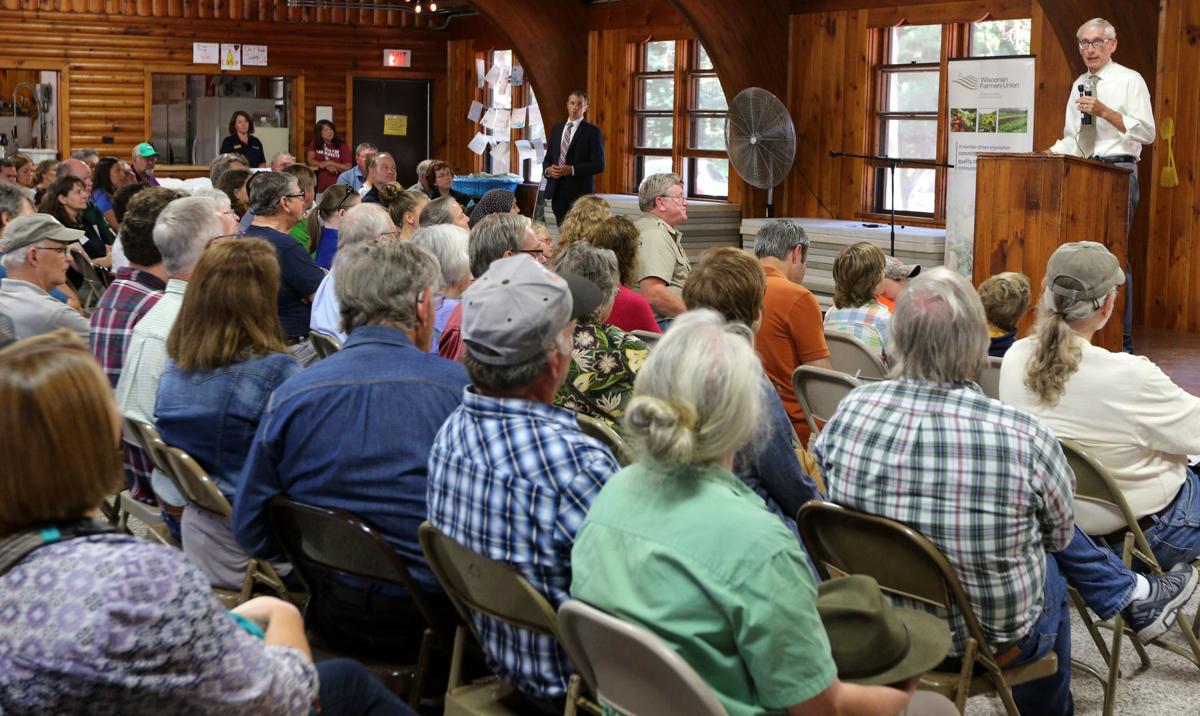 CHIPPEWA FALLS — A dozen kids showed up, hoping to swim, at Kamp Kenwood on the east shore of Lake Wissota on Aug. 15. However, the children were told that the blue-green algae along the shore meant the beach was closed.

Gov. Tony Evers said the bad news for the kids was a perfect example of the problems Wisconsin is facing with maintaining and preserving water quality.

“Not only are people concerned about water quality from their wells, they are concerned about the water they put on their fields,” Evers said at the Wisconsin Farmers Union summer conference. “Everyone should have access to clean drinking water. We have to protect our watersheds now and into the future.”

Evers added, speaking to the children: “Sometime in the future, we won’t have to worry about people swimming (in poor water quality.)”

During his visit to the campground Aug. 15, Evers observed a rainfall simulator, which showed the impact that runoff has on five different surfaces, from forests to cropland. The soil samples were all collected within a mile of each other in Pierce County.

The rainfall simulator showed how damaging runoff was on land that isn’t properly managed. It also showed the positives of no-till land management on farms.

Evers said he is working with the Department of Agriculture, Trade and Consumer Protection, having officials go around the state and visit large livestock farms. He also has ordered scientists in the Department of Natural Resources to work on ideas to reduce nitrates in soils. He said he recently observed a powerful DNR exhibit at the Wisconsin State Fair about clean water.

“I appreciate the good work done around wetlands,” he said.

“I recognize it’s a challenging life to be a farmer,” Evers said.

Craig Myhre, who farms about 800 acres south of Osseo in Trempealeau County, said this has been a tough year for farmers. At age 52, he is worried about going out of business. Fertilizer and seed prices remain high, and market prices are down.

“I didn’t have a good year last year,” he said. “Anyone I talk to is very worried. It’s going to be a do-or-die year for many farmers. I’m too young to quit, but how much equity do you want to burn up? The banks will call the shots, ultimately.”

Like other farmers, Myrhe said the tariffs have devastated the soybean business, as China completely stopped buying U.S. soybeans. China had been the number one foreign market.

“We’ve got a lot of backup of grain that should have been going out all summer,” Myrhe said. “Once they get them loaded (on cargo ships), is there anywhere for them to go?”

Ken Schmitt, a former Chippewa County board member from the town of Howard, said it will be a challenging year for all farmers. Schmitt is cutting back on the number of cows on his farm.

Schmitt said he was pleased that Evers made the trip to Chippewa County to hear from farmers.

“It’s nice to see the concerns about groundwater, because there are a lot of issues out there,” Schmitt said. “It would be a shame to squander that for future generations.”

About 120 people attended the WFU summer conference. WFU executive director Julie Keown-Bomar said it was a positive discussion about water quality and reducing pollution, along with analyzing consolidation in agriculture and the impact it is having on farmers. She was thrilled Evers participated in the discussion.

“We’re focusing on water and anti-trust issues, and he’s here to hear our perspectives on it,” Keown-Bowar said.

Like others, Keown-Bowar said the tariffs are adding to the stressful conditions farmers are facing.

“Things were bad before the tariffs, and the tariffs have made them worse,” she said. “This is salt in the wounds.”

Evers spoke about 15 minutes, then observed the rainfall simulator before leaving. He declined to speak with the assembled media, citing his tight schedule.