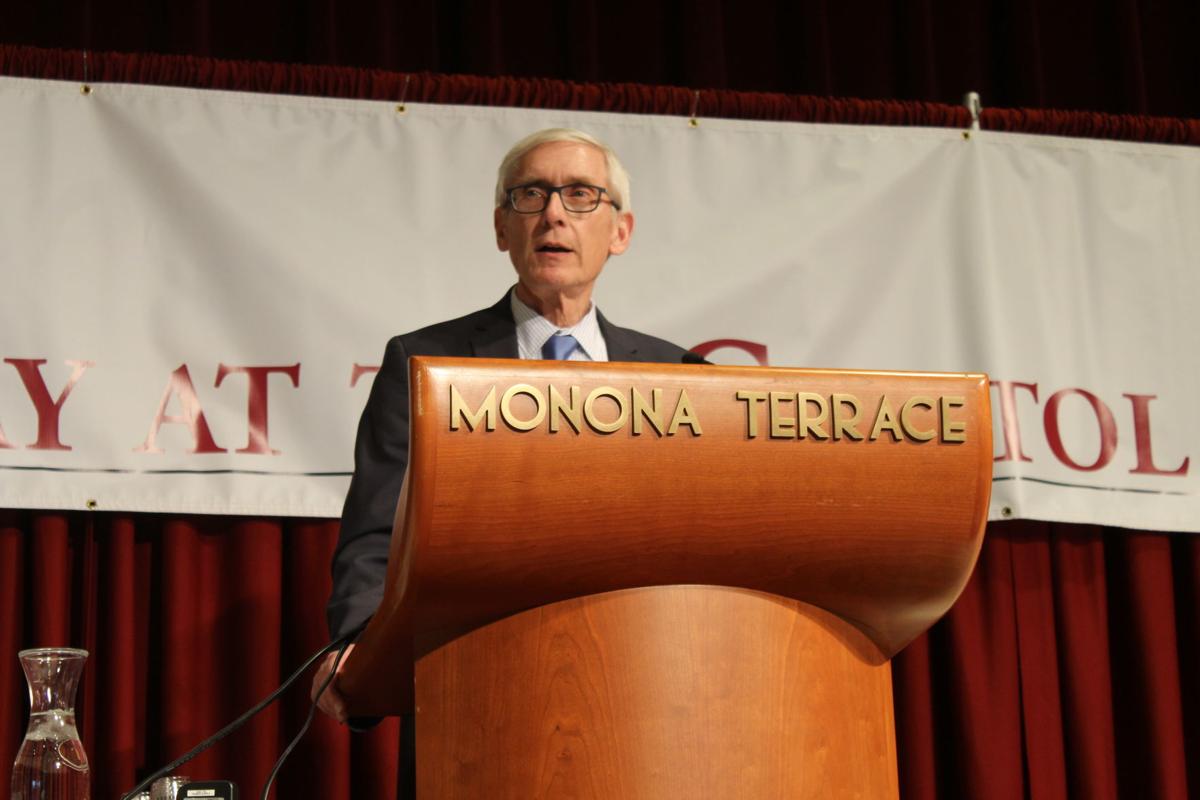 Gov. Tony Evers spoke at Ag Day at the Capitol on Feb. 4, addressing members of the Wisconsin Farm Bureau Federation before they met with legislators that afternoon. 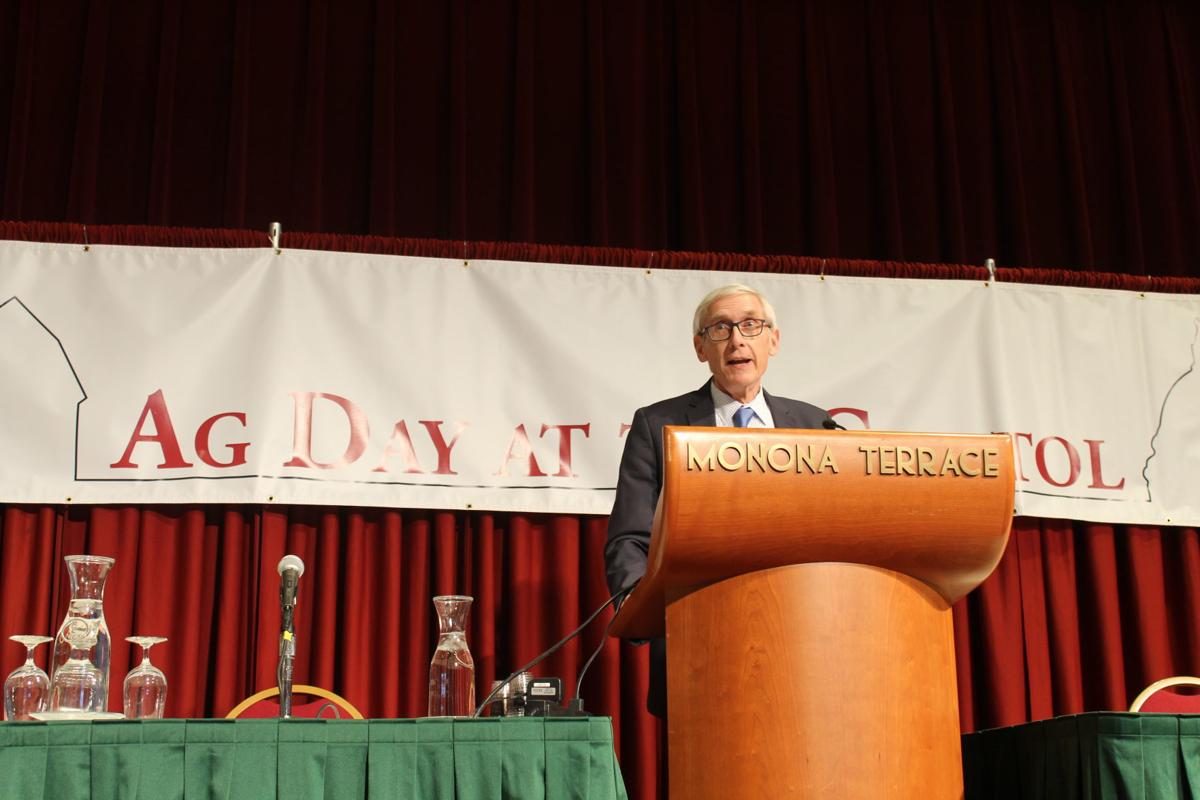 Gov. Tony Evers took to the podium at the Wisconsin Farm Bureau Federation’s Ag Day at the Capitol, sharing with members his three-pronged plan for agriculture and rural Wisconsin. 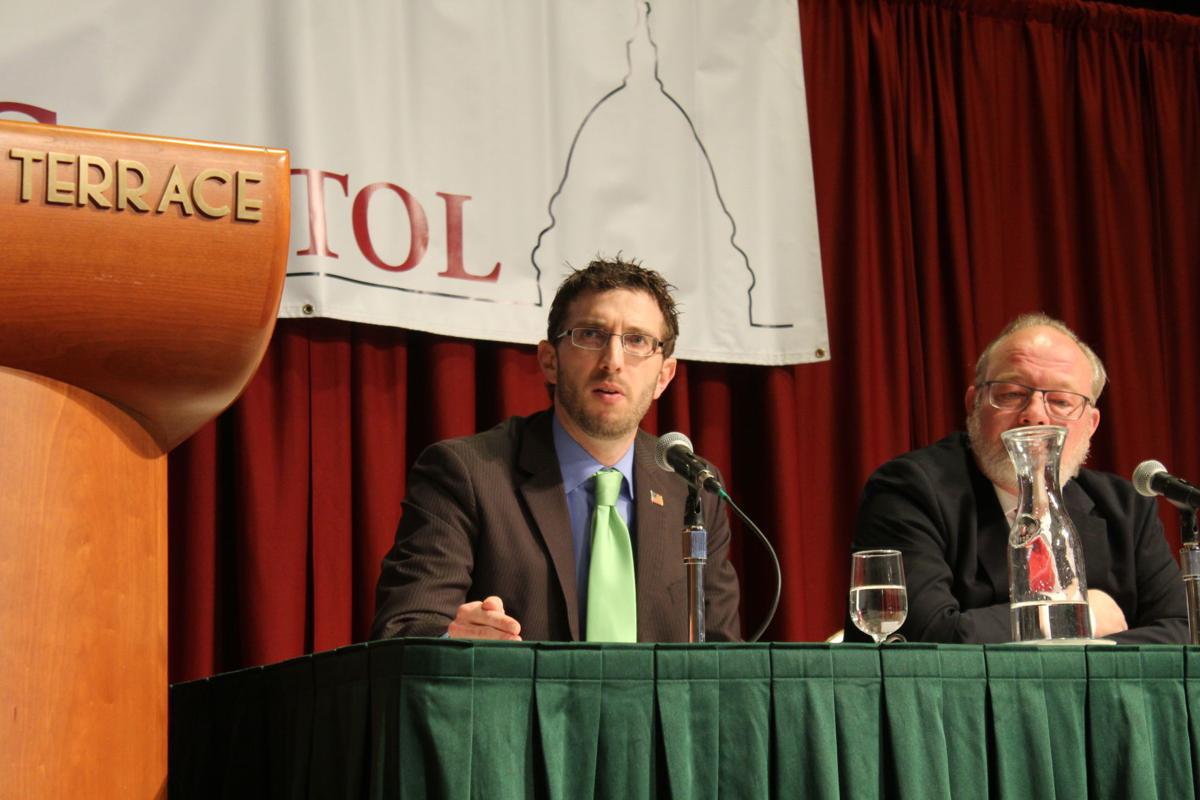 Gov. Tony Evers spoke at Ag Day at the Capitol on Feb. 4, addressing members of the Wisconsin Farm Bureau Federation before they met with legislators that afternoon.

Gov. Tony Evers took to the podium at the Wisconsin Farm Bureau Federation’s Ag Day at the Capitol, sharing with members his three-pronged plan for agriculture and rural Wisconsin.

MADISON — Joe Bragger, president of the Wisconsin Farm Bureau Federation, recently had the opportunity to attend Gov. Tony Evers’ State of the State address, complimenting the governor for putting a spotlight on agriculture and rural communities before introducing him at Ag Day at the Capitol on Feb. 4.

In his address, Evers unveiled a three-pronged plan to address agriculture and rural Wisconsin issues, a plan he created after visiting with farmers from across the state to get their feedback and input.

The first prong of the plan included calling a special session in the legislature to discuss eight bills proposed by the governor that addressed items such as providing resources to farmers closer to home through county agents and the Farm Center; creating a new farm-to-fork program that connects farmers and their products to local hospitals, businesses and universities; creating new regional mental health programs for farmers; and support for diversification of farm products.

“Frankly, I don’t care who gets the credit for this — I don’t care at all,” he said. “All I want us to do is to work together and have some good conversations about what’s right for rural Wisconsin.”

The second prong aims to make sure farmers, agriculture industries and rural communities are part of the state’s economic development portfolio. Evers has already called a commission together to work on long-term strategies to invest in agriculture and rural prosperity, but encouraged those in attendance to engage with their lawmakers to keep the conversations going.

“(Economic development) can’t all be around south-southeast Wisconsin,” he said. “It’s got to be a 72-county issue.”

The final prong ties in with the second prong of his plan — working with Wisconsin Economic Development Corporation to establish an Office of Rural Prosperity, which will be a “one stop shop opportunity” for people to navigate the state’s programs and resources.

It will be specifically tailored to residents of rural Wisconsin.

“I know all of this is just scratching the surface, this is not a silver bullet. But I do believe with what we have proposed and what legislators are working on now that we are going to make some meaningful and comprehensive steps towards farmers and our rural communities, and they are crafted with the help of all of you,” Evers said.

He’s also building off accomplishments and progress made in 2019. Significant improvements were made to the state’s industrial hemp program, hopefully poising the state to become a leader in the hemp industry once again. Almost $50 million was invested in broadband services, the largest state investment in state history, Evers said. With the help of the legislature, Evers’ administration was also able to improve the state’s commitment to making bridges and roads safer in Wisconsin. And finally, the state took some critical steps in improving water quality in 2019, which Evers proclaimed the “Year of Clean Drinking Water” at his address last year.

“The important thing about that is that it’s going to take more than one year to deal with (the water quality) issue, but I have the utmost faith in the farm community. They are the original stewards of the land, after the Native Americans, and there’s no reason why we can’t work together to make clean drinking water a priority for the state,” Evers said.

“We still have a lot of work to do, especially for our rural communities that have been hit pretty hard the past four or five years, or longer,” he added. “But farmers have supported our state for generations and our state has survived because of your resilience and your dedication to your work.”

He also commended the work of organizations like Wisconsin Farm Bureau Federation for supporting students’ access to agriculture education through FFA and other agriculture-oriented programs in school districts of all sizes across the state. No matter the size of the district — urban or rural — students in Wisconsin are being exposed to agriculture, and Evers is thankful for that.

WFBF 2020 prioritiesBefore reviewing bills and policies to support on Feb. 4, Bragger asked for a moment of silence for those struggling in agriculture and for those who have succumbed to the struggle in rural areas of our state; he asked that those in attendance reflect on their lives as well as the lives of others and try to think of ways we can continue to support each other.

He knows the legislature and the government is faced with many issues and that agriculture is often misunderstood or passed over when it comes to legislation, but unwaveringly, only the farmer can tell their story.

“With all your heart and soul, tell your story and make that ask,” Bragger said.

Farm Bureau members were asked to support a number of bills and legislation during their visit to the Capitol this year, including revisions to the Wildlife Damage Abatement and Claims Program; Truth in Labeling legislation that addresses labeling for dairy and meat products for public consumption; changes to the Farmland Preservation Program to encourage more participation; funding of eight state specialist positions that have been left vacant due to budgetary restraints; a fix in the MAC crop insurance program; and an exemption for farmer CDL mileage.

Members were then asked to support specific Water Quality Task Force bills, including the creation of a nitrate pilot program for farmers interested in on-farm projects to reduce nitrate; additional funding for county conservationists; an increase in Well Compensation Fund grants; and the creation of a system for buying and selling nitrogen credits through a central clearing house.

An additional bill, which provides a variety of water conservation strategies that include the promotion of cover crops through a partial rebate for crop insurance premiums paid; an increase in funding for producer-led watershed groups; and the addition of a fully-funded managed grazing specialist at the Wisconsin Department of Agriculture, Trade and Consumer Protection, were also asked to be supported.