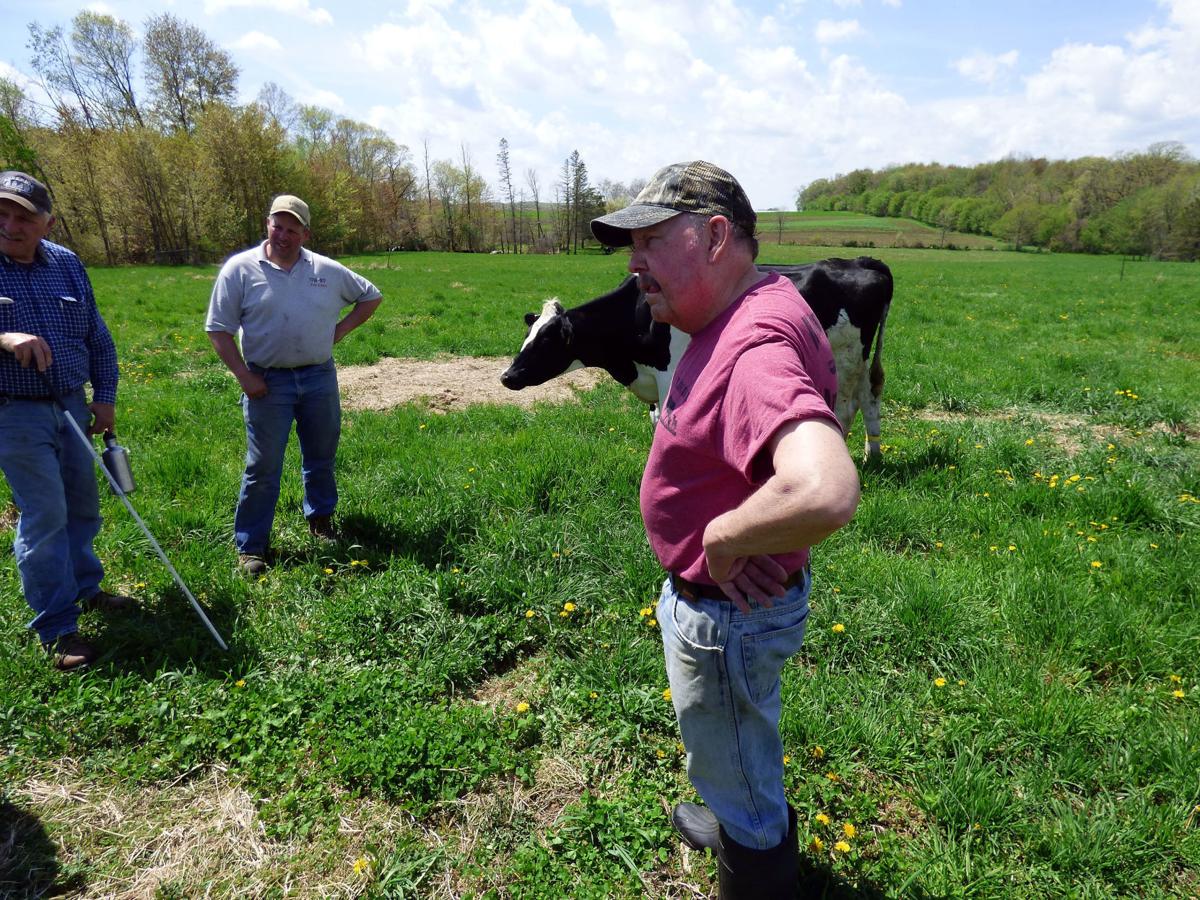 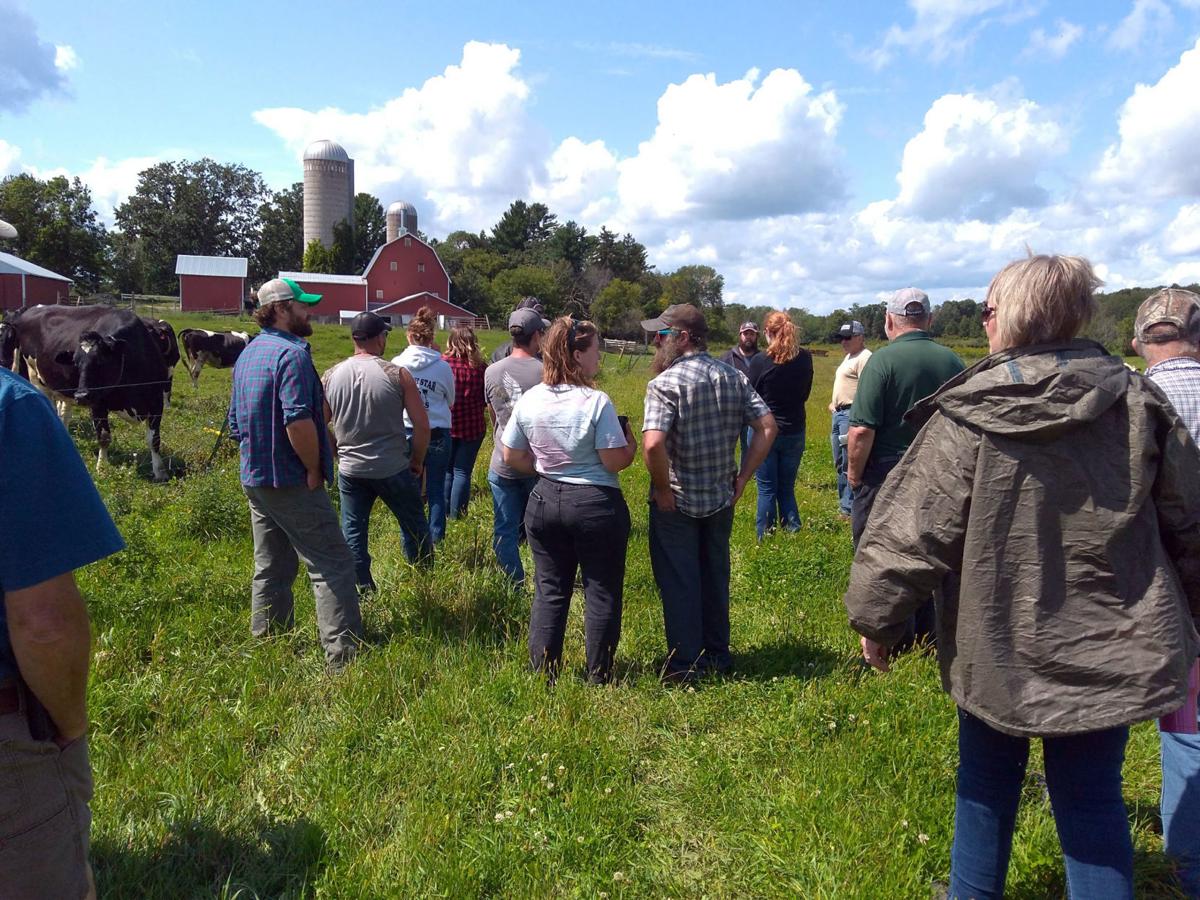 Farmers and other interested parties gathered Aug. 27, 2019, to learn about the challenges and benefits of transitioning to rotational grazing at Berglane Farm near Chetek.

Farmers and other interested parties gathered Aug. 27, 2019, to learn about the challenges and benefits of transitioning to rotational grazing at Berglane Farm near Chetek.

As spring rolls out across the state, so too does pasture walk season — usually.

But current plans to hold the pasture walks that give farmers the opportunity share observations and learn from demonstrations are, like many other events, in a wait-and-see holding pattern as organizers await news of whether they will be able to continue with the events safely.

“Everything’s kind of put on hold,” said Rachel Bouressa, grazing planner for Golden Sands Resource Conservation and Development and a GrassWorks board member.

Mary C. Anderson, president of River Country Resource Conservation and Development, said that going forward for them, a lot is dependent on what happens over the next few weeks, with decisions on if or how to proceed with pasture walks this season to be made by the end of the month.

River Country generally starts holding pasture walks in April and May but has shelved the pasture walks they had planned for those months since the “safer at home” order directed by Gov. Tony Evers was put in place. Due to the order, River Country also had to postpone its annual meeting, which will now be planned for fall.

Golden Sands hadn’t quite officially set their pasture walk season when the order went into place, Bouressa said, but they have had to postpone at least one other event planned for this spring until fall.

There’s hope that GrassWorks’ annual picnic may be able to continue as scheduled for July 25, Bouressa said, but planning still has to be done.

Pasture walks, as outdoor events, might be among the first to be OK’d when restrictions begin to ease, Bouressa said, but other options, such as further season delays or virtual options, are also being considered.

Since the COVID-19 pandemic began and “safer at home” orders have been put in place, many events have fairly successfully transitioned to virtual formats, but applying that to pasture walks may be more difficult.

While grazing groups have been looking at which virtual options may be available to them and have even considered the feasibility of setting up mobile hot spots in pasture to provide Wi-Fi access, Bouressa said, technological hurdles would have to be crossed and a lot would still be lost from the in-person experience.

Without in-person pasture walks, farmers would lose the in-the-field experience of actually seeing what is going on at a particular farm, Anderson said.

Farmers, in addition missing out on hands-on experiences and a sense of camaraderie, could also wind up “missing out on quality conversations,” Bouressa said.

The kind of group discussion that defines many pasture walks would be harder to do virtually, Anderson said.

That has further implications on fulfilling the mission of pasture walks because “the heart of a pasture walk is farmers learning from each other,” Anderson said.

“Staring at screens is not the same as walking in the fresh air,” Bouressa said.

With COVID-19 spreading during a busy farming time, farmers may also be less motivated to give up the part of the day they would otherwise use on a pasture walk for a virtual experience, Bouressa said.

Still, farmers can benefit from information being shared even if its in a virtual format, and those options can be set up to be accessible at times farmers are less likely to be busy with the rest of their work. GrassWorks has been working with other organizations to set up different online options for farmers to get the answers they’re looking for, Bouressa said.

“Ask a Grazier” online discussions have been held as biweekly Zoom meetings.

A Google group (groups.google.com/forum/#!forum/grassworks-ask-a-grazier) and a Facebook group (www.facebook.com/groups/550684955557954) have also been established for graziers to have their questions answered.

Anderson said that River Country was just starting to look at virtual options as a possibility but was going to follow GrassWorks lead because of the educational webinars GrassWorks had already done.

But even if pasture walks can begin in-person later this year or if suitable virtual alternatives are found, grazing has begun in parts of the state, and farmers are still going to miss the pasture walks and topics that might otherwise be covered at this time of year.

“Some windows of opportunity have been lost because of the seasonality of the topic,” Anderson said.

Farms that had volunteered to host early season pasture walks and couldn’t may be able to later in the season with another topic, though, Anderson said.

“There’s a million topics to cover,” Bouressa said, noting that planned topics may have to be adjusted anyway due to the nature of a season — for example, if it is cool and wet compared to if it is warm and dry.

Future updates on pasture walk seasons can be found on the RCDs websites and Facebook pages.

River Country will send emails to a list of previous pasture walk attendees, too.

Additionally, GrassWorks compiles pasture walks and other events from several groups on its website, grassworks.org.