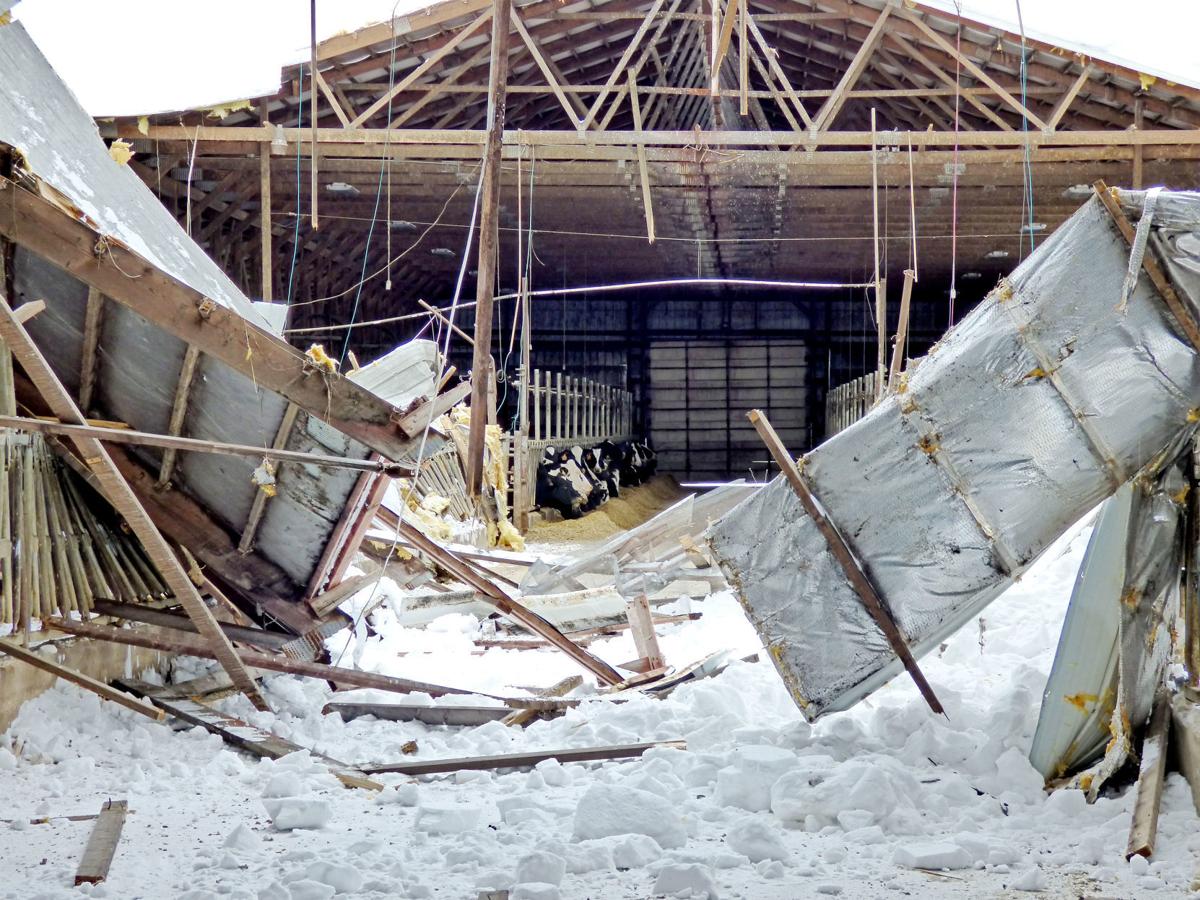 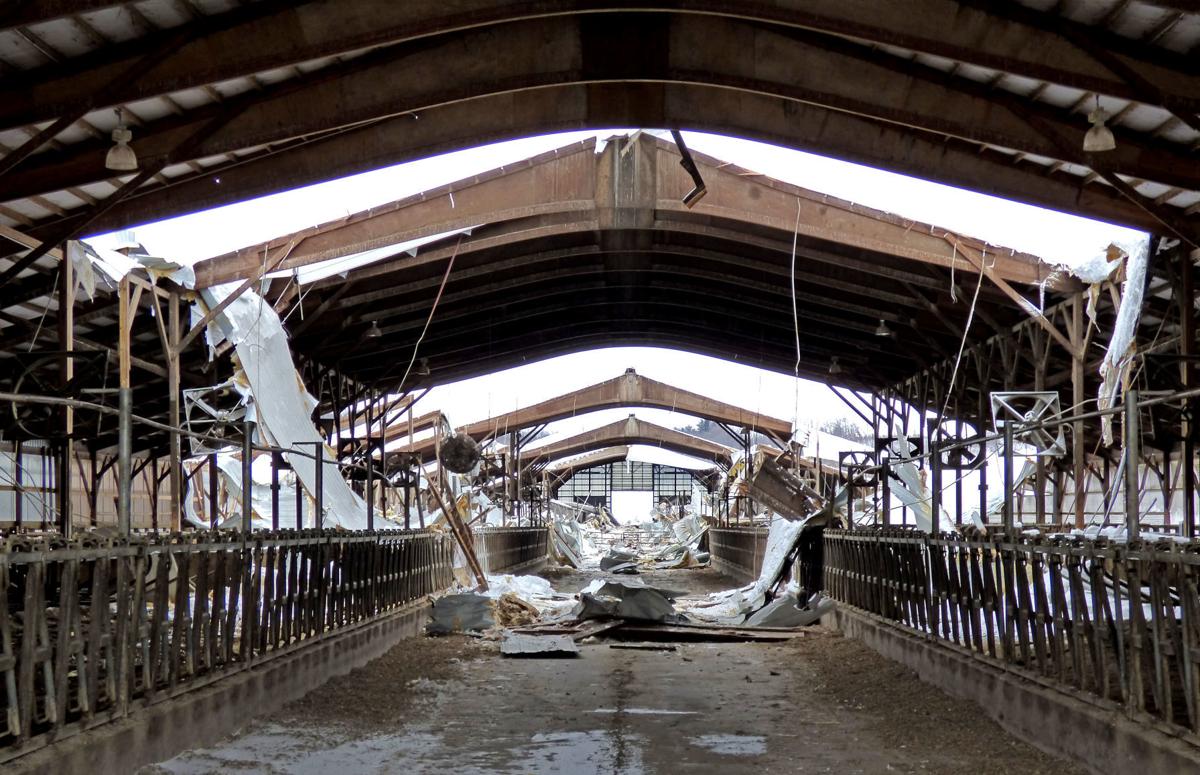 The roofs of four buildings at Hamlin Valley Farms in Trempealeau County collapsed during the Feb. 23-24 round of winter storms. 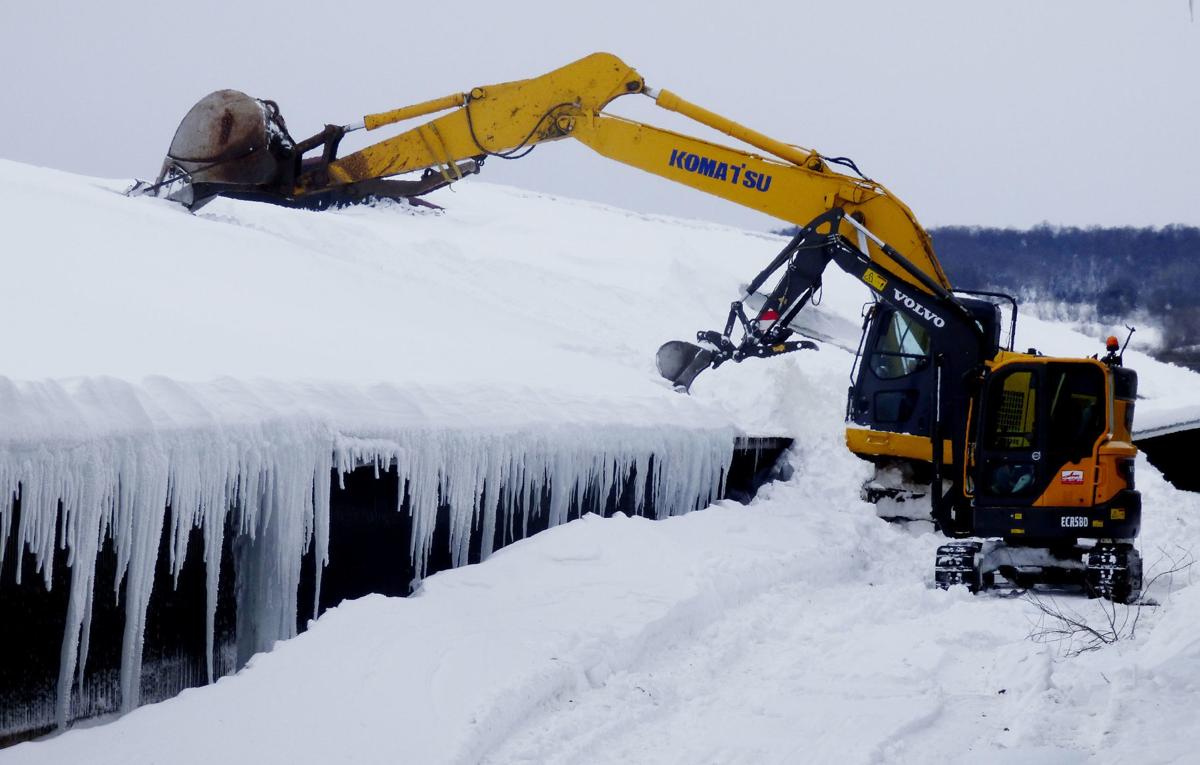 Top: Workers cleared snow from the roof of a barn Feb. 26, at Hamlin Valley Farm east of Eleva. Heavy snows and winds caused the collapse of roofs of four barns at the farm. 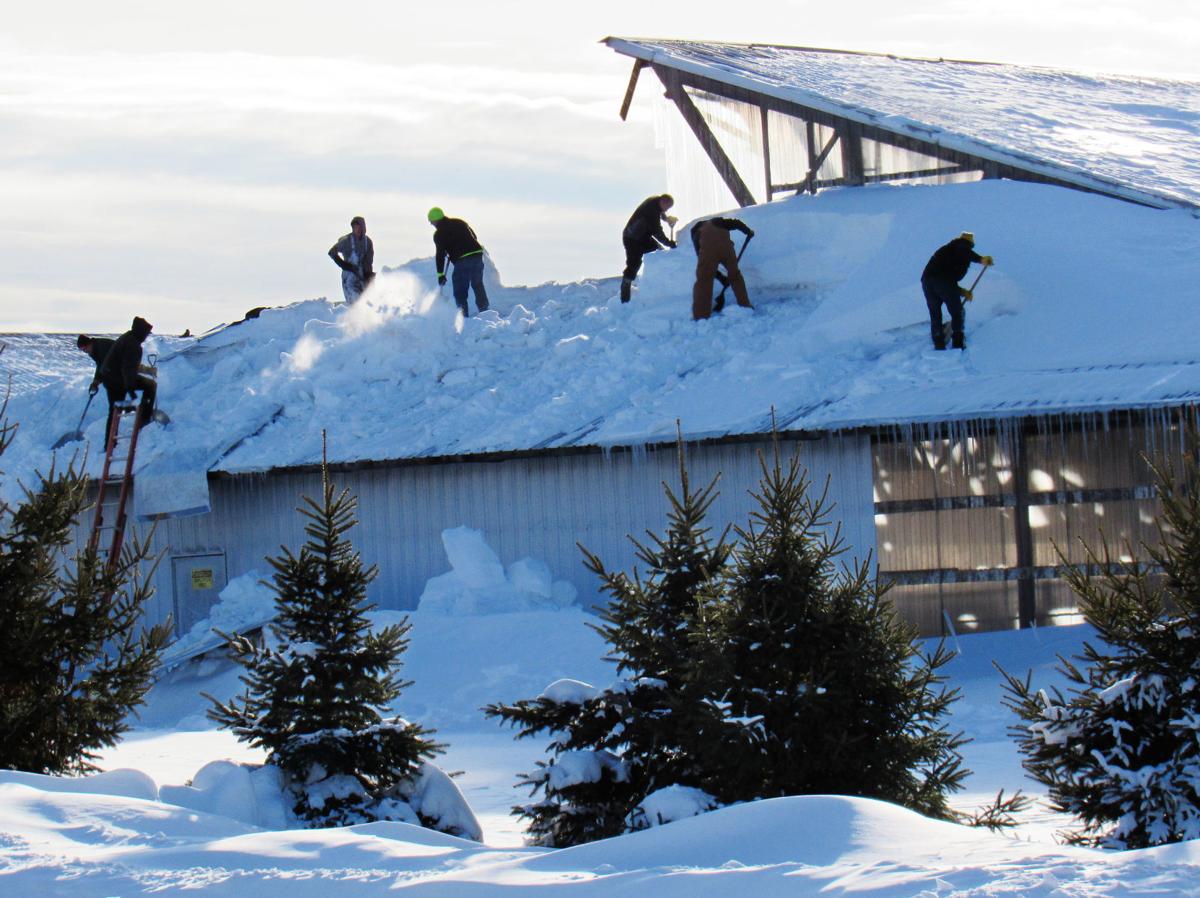 Workers shoveled snow from what remained of a barn roof at Friendshuh Farms near Clear Lake in southern Polk County. More than 30 head of dairy cattle were killed after another section of roof on the barn collapsed in February due to heavy snow load.

The roofs of four buildings at Hamlin Valley Farms in Trempealeau County collapsed during the Feb. 23-24 round of winter storms.

Top: Workers cleared snow from the roof of a barn Feb. 26, at Hamlin Valley Farm east of Eleva. Heavy snows and winds caused the collapse of roofs of four barns at the farm.

Workers shoveled snow from what remained of a barn roof at Friendshuh Farms near Clear Lake in southern Polk County. More than 30 head of dairy cattle were killed after another section of roof on the barn collapsed in February due to heavy snow load.

ELEVA — Even as another round of snow was beginning to fall, employees, contractors, an insurance adjuster and a veterinarian scrambled around Hamlin Valley Farms surveying the damage after a winter storm Feb. 23-24 caused the roofs of four buildings on the farm to collapse, killing at least 40 head of Holsteins and injuring another 30.

“It’s pretty depressing,” said Gary Gullicksrud, one of the farm’s owners. “A person is just trying to manage to get along with the low milk prices, and all of the sudden to get a catastrophe like this makes things worse yet.”

Gullicksrud said roofs started collapsing early Sunday morning, when one of the main milking barns went down. After a connecting link used to bring cows to the parlor collapsed, panels on the roof of the 1,000-cow barn started collapsing.

“Shortly after it started, it was a domino effect, and every barn was collapsing,” Gullicksrud said. “Luckily, nobody got hurt, but we weren’t able to get all the animals moved away quick enough.

Gullicksrud said the loss of animals could have been worse if it wasn’t for the efforts of the farm’s employees, who heard the roof cracking and were able to clear out some of the pens. They then called Gullicksrud, who made his way back to the farm at 2:30 a.m. Sunday.

“Trying to get back to the farm, it was unbelievable, the snowstorm,” Gullicksrud said. “Once we showed up, it was just like every barn was coming down on us. It was just the worst feeling ever.”

Gullicksrud said the farm shipped their heifers to an area grower for the time being and consolidated the milkers. He said the family felt fortunate their parlor was undamaged.

“We’re able to still keep milking. We’re just really crammed right now for cow space,” he said. “It would have been totally devastating if we wouldn’t have been able to keep milking. Twenty-one-hundred cows is a lot of animals to try to move somewhere.”

“That wind just carried the snow from one side of the roof to the other, to the east side of the roof, and it just got to be too much snow and weight,” he said. “You get that much snow load blowing over the top of them and landing on the other side, it’s a lot of weight.”

Hamlin Valley Farms was founded in 1986 by brothers Gary, David, Mark and Eric Gullicksrud. Gary’s son Chad and David’s sons Jordan and Justin have since bought into the farm.

“It’s a family operation, so it’s not just one person getting the stress load,” he said. “We’re all stressed out about it. But our employees are doing the best they can to help us along.”

The farm milks about 2,100 black-and-white Holsteins three times a day in a double-30 parallel parlor.

“The cows are crowded, but as long as we can keep them fed and bedded and watered, we’ll keep plugging along,” Gullicksrud said. “We keep crossing our fingers and praying every day that nothing more will happen.”

Gullicksrud said several area businesses volunteered to help with clean-up, and several workers were using backhoes with scrapers in an attempt to clear snow off some of the farm’s undamaged roofs.

“We really appreciate the help we got from the local businesses,” he said. “Everybody trucked through the snow to get here and help us out. You have something like this happen, the support you get is wonderful, especially considering the conditions they were working in.”

UW-Extension agriculture agents in western Wisconsin had heard reports of several roof collapses, with Mark Hagedorn in Eau Claire County reporting eight to 10 in his county alone, and Jerry Clark said he was aware of another four in Chippewa County.

“It doesn’t seem to be older or newer buildings; there’s been a mix,” Okonek said. “It’s already been such a challenging four or five years financially for these farmers anyway.”

Randy and Char Glenna are going through the first full winter with their new dairy barn near Amery in Polk County. Char said hearing of recent barn roof collapses has her on edge.

“I look at our barn roof every day in fear, not knowing how much is too much or even what’s there,” she said.

Across the border, more than 15 barn roof collapses were reported in southern Minnesota, displacing many dairy herds. Ellsworth Cooperative Creamery reported damage to its popular cheese curd trailer after the roof of the shed in which it’s stored for the winter caved in.

Paul Fischer milks 75 cows in the Owen area and ships about 5,000 pounds of milk each day. Normally, milk from his farm is picked up daily, but because the milk truck couldn’t get through to the farm due to treacherous, drifted roads, the Fischers were forced to send 1,000 pounds down the drain after the Feb. 24 evening milking to make room in the tank for the next morning’s milking.

“I was watching it (go down) to make sure I didn’t take any more than I needed to,” he said, adding that his cooperative, FarmFirst, will cover 75 percent of the loss. “We also milked 1½ hours later on Monday, waiting for the milk truck.”

Fischer said he knows of several other local farmers who had to dump milk — one as much as 5,000 pounds — during the storm because drifting snow made the roads impassable and milk trucks couldn’t make it to their farms. One smaller farmer stored excess milk in pails.

Across southern Minnesota, hundreds more dairy farmers had to dump milk Feb. 24-25 after milk tankers failed to reach their destinations for timely pickup.

The Fischer farm is located on a town road about two miles off a county road. Fischer said that even from the driver’s seat of his four-wheel-drive Dodge pickup, he could barely see over the snowbanks last week.

He said he knows of several collapsed barn roofs in Clark and Taylor counties and recently had someone come in to shovel off two of his roofs because he was concerned about snow load. With more snow forecast last week and temperatures remaining well below freezing, he said, more snow removal could be necessary later.

Fischer said his farm received more than 4 feet of snow last month, and with the ground freezing so deeply earlier in the season, he fears that much of this snow will run off in the fields.

“It’s really disgusting,” Fischer said. “It’s not good. I’m on the town board, and they had to put the V-plow on our grader for the first time in years.”

Salt in the wound

The recent heavy snowfall provides good reason to be concerned about heavy snow loads on farm buildings, especially if more snow falls before the snow already there melts or slides off.

{div class=”page” title=”Page 1”}{div class=”section”}{div class=”layoutArea”}{div class=”column”}“Snow and ice accumulations on roofs cause a loading which can cause the roof to collapse when the roof is not strong enough to resist the load,” said Brian Holmes, UW-Extension emeritus agricultural engineer. “The more dense the snow and ice, the greater the load for a given depth. Wind blown-off and snow slide-off can reduce snow load on a roof. However snow drifting into leeward or lower roofs and valleys and snow slide onto lower roofs can add significant loads from accumulated snow.”

In addition to estimating the roof loading, he said, it’s important to know the loading the roof can resist.

Okonek recommended farmers who were planning to get up on roofs to remove snow first remove the equivalent of their body weight in snow before climbing onto the roof.

“You don’t want to add another 200, 250 pounds to an already fully loaded roof,” Okonek said. “And they’ve got to be careful. Steel roofs get slippery.”

Okonek also said farmers and homeowners should check with their insurance provider to make sure they are covered in the event of a roof collapse.{/div}{/div}{/div}{/div}

“As farmers were already handling the severe wind and snow, building collapses added even more stress and hardship,” he said.

Holte said Rural Mutual Insurance is setting up and assigning claims to adjusters as they are submitted by insured farmers. Rural Mutual adjusters will be in touch within 24 hours of a farmer submitting a claim and will set up a time to come view the damage. Farmers are encouraged to submit claims as soon as possible and be specific about the location and extent of the damage.

“I ask you keep our farmers in your thoughts and prayers as they dig out and continue caring for their families, farms and livestock to the best of their ability,” he said.