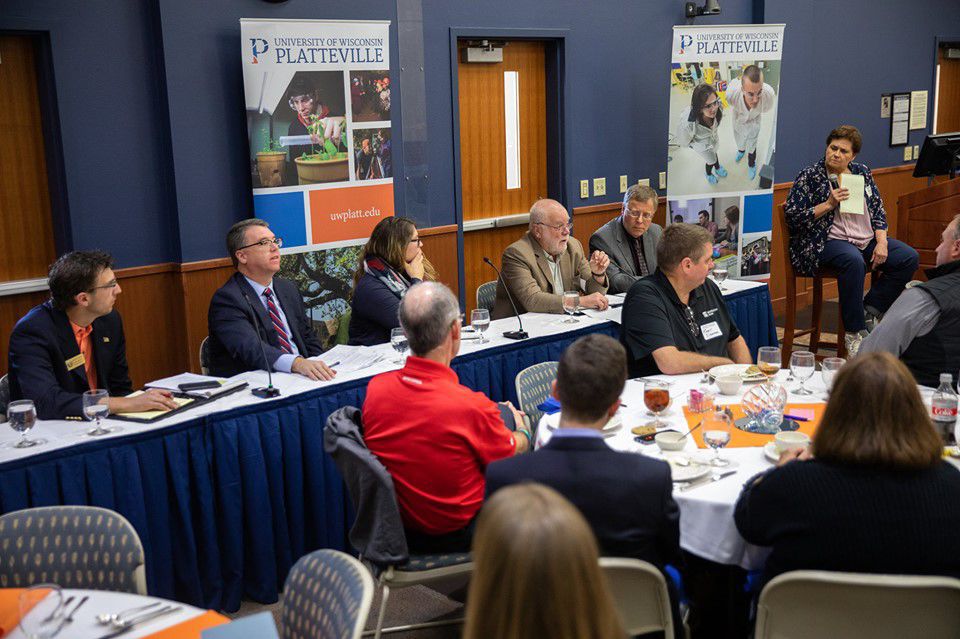 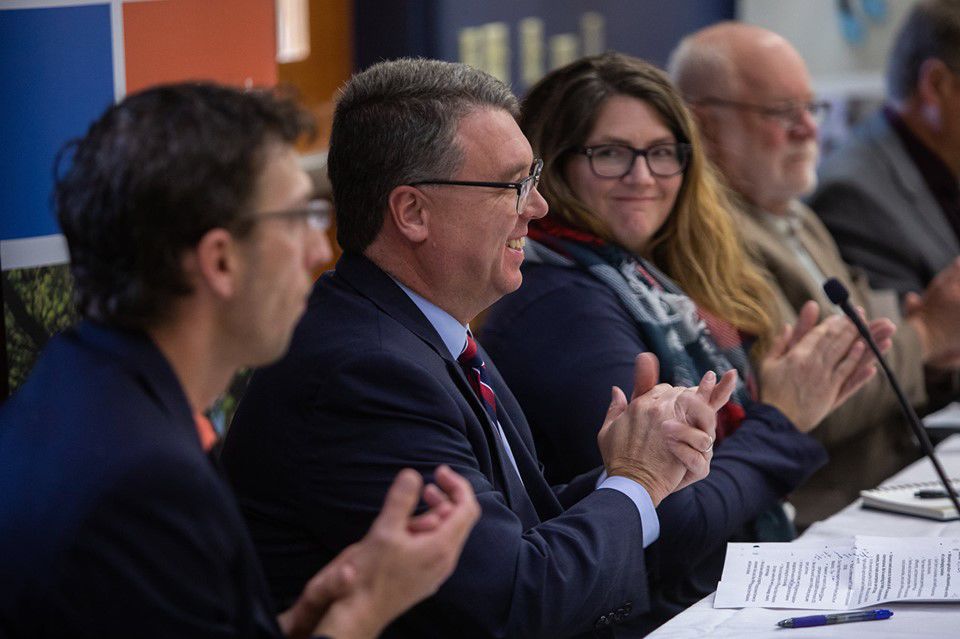 Brad Pfaff, secretary-designee of the Wisconsin Department of Agriculture, Trade and Consumer Protection, joined in a round of applause at the conclusion of the panel discussion on struggles in Wisconsin's farm country.

Brad Pfaff, secretary-designee of the Wisconsin Department of Agriculture, Trade and Consumer Protection, joined in a round of applause at the conclusion of the panel discussion on struggles in Wisconsin's farm country.

PLATTEVILLE — During a dry stretch of weather two weeks ago, Representative Travis Tranel, like many farmers across the state, was out chopping into the early hours of the morning. As a state legislator, Tranel is in a unique position — serving in the statehouse and dairy farming with his family near Cuba City.

But being a farmer in the legislature can also be a challenge, as he attested to during a recent panel discussion at UW-Platteville titled “Struggles in Wisconsin Farm Country.” The panel was part of WisBusiness.com’s “Navigating the New Economy” series and was moderated by farm news personality Pam Jahnke.

“There are less than a handful of us that know anything about agriculture in the legislature. It’s unbelievable,” Tranel said. “When our state started, the legislature was pretty much comprised of farmers and a few attorneys. Now it’s a lot of attorneys — and me.

Agriculture has been in an economic downtown for the past five years, as those in the agriculture industry already know; however, Tranel said his legislative counterparts may only just be tuning in. This summer, legislators visited dairy farms across Wisconsin for breakfast as part of June Dairy Month, and many of them returned to the Capitol wondering what’s going on in agriculture and if their farmer constituents were mad about something in particular.

To add to the challenge of disconnect, Wisconsin farmers have been faced with a number of hurdles this year and in years past.

Unfortunately, it may be a few years before a lot of the stress in the countryside is lessened. Mitchell said it’ll take awhile to build business back up and the stress will stay with the agriculture community for awhile too.

“The capital has been sucked away, and it’ll take awhile for those reserves to build back up,” he said.

“Ag’s on slow trends up and down, and I think it’ll take us a few more years, even after the markets recover, assuming they do, to get going again.”

The stress isn’t always something people not involved with agriculture understand, as Tranel alluded. The non-agriculture public may be wondering what’s wrong with farmers and assuming their mental health is fine, and that they just can’t afford to pay their bills this year.

“I think we need to separate mental health from not being able to pay their bills because they are two separate issues,” Tranel said. “That stress is so real, but I don’t think the general public understands that.”

A speaker’s task force was recently assembled to focus on mental health in the state, but Tranel was critical of a component specifically to address agriculture.

“Farmers need markets to sell product to at an affordable price so they can pay their bills,” he said. “Short of that, you’re not going to accomplish anything.”

Tranel said he fears it’ll continue to be challenging to get legislators, and the general public, in tune with these struggles as they become further and further removed from the farm with each generation.

While some farmers are exiting the industry due to struggles with weather, ongoing trade wars and low crop prices, Anna Landmark is determined to use her creativity to continue on with her business, Landmark Creamery. Landmark, a cheesemaker that utilizes sheep milk and pasture-raised cow milk, launched her business six years ago. She met her partner in business at a Soil Sisters event, where women farmers gathered to share ideas and have meaningful discussions about agriculture.

Two years ago, Landmark and her partner were able to open their own cheese aging facility, but working in the business hasn’t come without its challenges.

“We had hoped by year six that we’d be in our own cheese plant, but equity is always hard to scrounge up,” she said. “There aren’t a lot of grant programs for food businesses of my size to take advantage of. Banks are obviously reluctant to make loans right now so growth has been challenging.

“I think we could grow a lot faster if we had some more access to both cash and other services.”

Sharing the stories of Wisconsin farmers and connecting consumers with those farmers is top-of-mind for Wisconsin Department of Agriculture, Trade and Consumer Protection secretary-designee Brad Pfaff, who spoke about several initiatives the department is exploring. The department is partnering with the Wisconsin Department of Workforce Development to reinstate the Wisconsin Agricultural Education and Workforce Development Council, with goals to assist farmers leaving production agriculture in finding other employment within the agriculture industry.

The department has also participated in several reverse buyer missions in an effort to open more international markets for Wisconsin agriculture products.

The panel discussion was recorded and can be viewed at https://tinyurl.com/y4hzjjyn.