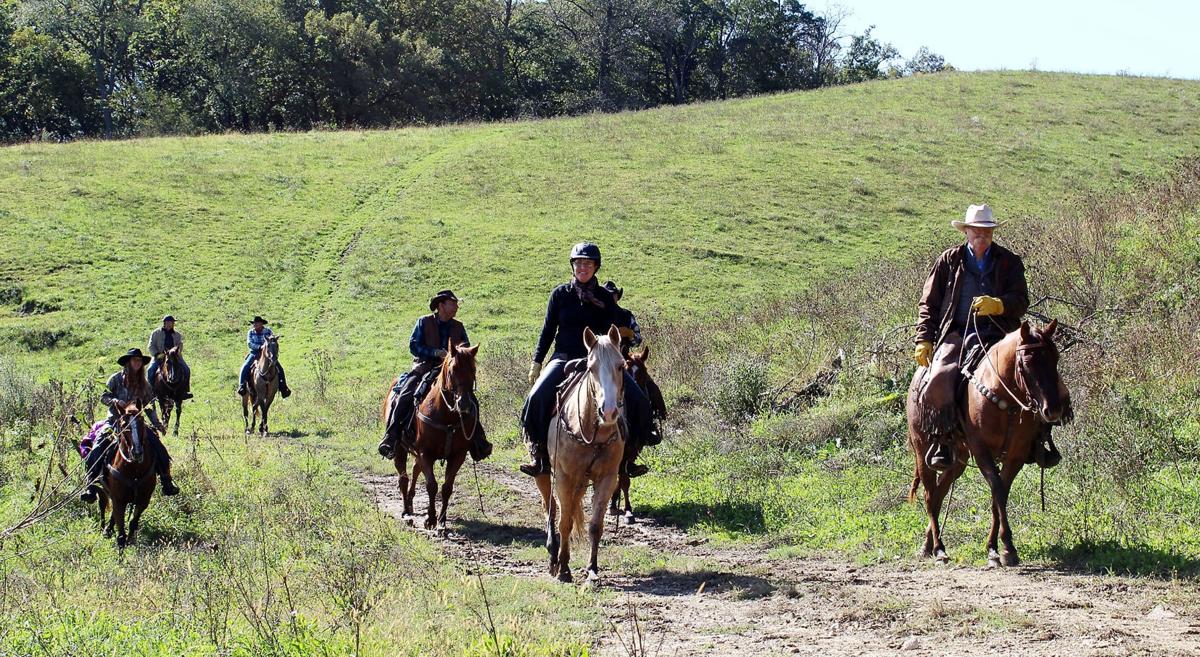 Riders taking part in the Oct. 4-6 Devil’s Hole Cattle Drive Clinic returned to home base after spending a morning gathering cattle. Ranch owner and cattle drive boss, Jeff “Doc” Menn rides on the far right at the head of the group.

Devil’s Hole Cattle Drive Clinic participants and clinic organizers are mounted up and ready to move cattle to a new pasture. The Oct. 4-6 clinic was the seventh clinic hosted at the Norwalk area ranch this year.

Riders taking part in the Oct. 4-6 Devil’s Hole Cattle Drive Clinic returned to home base after spending a morning gathering cattle. Ranch owner and cattle drive boss, Jeff “Doc” Menn rides on the far right at the head of the group.

Devil’s Hole Cattle Drive Clinic participants and clinic organizers are mounted up and ready to move cattle to a new pasture. The Oct. 4-6 clinic was the seventh clinic hosted at the Norwalk area ranch this year.

Horsemen and women with a yen to experience an old-time cattle drive don’t need to travel out West; they can learn how to gather and move cattle at Devil’s Hole Ranch.

The ranch, owned by Jeff “Doc” and Paula Menn, is located in the valley between Norwalk and St. Mary’s Ridge, where the Menn family operates one of the largest cow-calf operations in Wisconsin.

Menn, a fifth generation descendant of German immigrants who first started farming the land in the 1850s, serves as the cattle drive boss.

The Menn family raises Angus and Angus crosses, using rotational grazing. The cattle drive riders help move the cattle to new pastures, while learning skills for rounding up cattle roaming the rolling hills and valleys of the ranch.

In addition to Wisconsin, clinic participants have come from Illinois, Indiana and Minnesota with group sizes running from as few as seven riders to as many as 28. One of the clinic riders, Jessica McMillen of Stoughton, said the Oct. 4-6 cattle drive clinic was the third time she has taken in a clinic.

“I’m still learning something every time I come,” McMillen said.

Located in Wisconsin’s Driftless Region, the ranch’s ridges and coulees provide riders and their horses with challenging terrain.

Riders taking part in the early October clinic did get a taste of what cattle drovers of old might have endured, gathering and moving cattle on a cold, rainy Saturday. The weekend wasn’t a complete washout as they were able to enjoy pleasant fall weather the following day.

While participants learn about handling cattle on horseback, they also gain a sense of accomplishment. Menn recalled one past clinic participant who was a bit apprehensive in the beginning, but after herding cattle for the weekend, appeared to be much more self-assured.

“Success on a ride isn’t to train them as cowboys,” Menn said. “If we can help them gain confidence and come away with a positive experience, then we’re successful.”

The ranch has hook-ups for trailers, flush toilets and showers as well as a saloon and dining facilities. The accommodations allowed the ranch to host a wedding with the marriage ceremony taking place at a ridge point overlooking the clinic home base and the valley.

After attending the clinics for four years, Brianna Sheehan is now working as the cattle drive’s wrangler, traveling from northern Illinois to help with the clinics.

To be ready for difficulties riders might encounter on the drives, Sheehan makes sure to pack a first aid kit, as well as an extra halter and lead rope, extra reins, food to help diabetics and medicine for medical conditions such as asthma.

“You just never know,” Sheehan said. “This weekend, we had a couple loose saddles and people ended up off their horses.”

Around the evening campfires, Sheehan shares her gift of storytelling, reciting stories learned from her grandfather and poems she’s memorized.

The clinics grew out of the ranch’s annual roundup and the Menns involvement the Wild West Days held in August in Viroqua.

“It’s a labor of love,” Menn said. “You’re not going to get rich doing this, by any stretch of the imagination.”

The ranch has been known as Devil’s Hole since Menn’s great-great grandmother, Anna Margaretha, got lost in one of the valleys while trying to bring cows home for milking. When she was finally located, she exclaimed, in German, “That was a terrible ‘Devil’s Hollow’ out there.”

Despite great-great grandmother’s opinion of the land, the ranch has stayed in the family, getting passed down to Menn by his parents, Jake and Katherine Menn, in the early 1990s. Over the years, the ranch has grown from its original land grant to 3,500 acres.

Other locations on the ranch’s land have been dubbed Roller Coaster; a suitable description of the terrain; The Crack, where a winding stream flows through the lowland of a coulee; The Cuckoo’s Nest, “because anyone who would want to live there has to be cuckoo;” and Heaven’s Gate, to counter the negative nuance of Devil’s Hole.

The Menns now partner with their son-in-law and daughter, Gabriel and Aurora Slattery, who operate the ranch’s daily operations.

Additional information can be found on the Devil’s Hole Ranch website at www.devilsholeranch.com, by emailing devilsholeranch@gmail.com or by calling 608-343-5680.