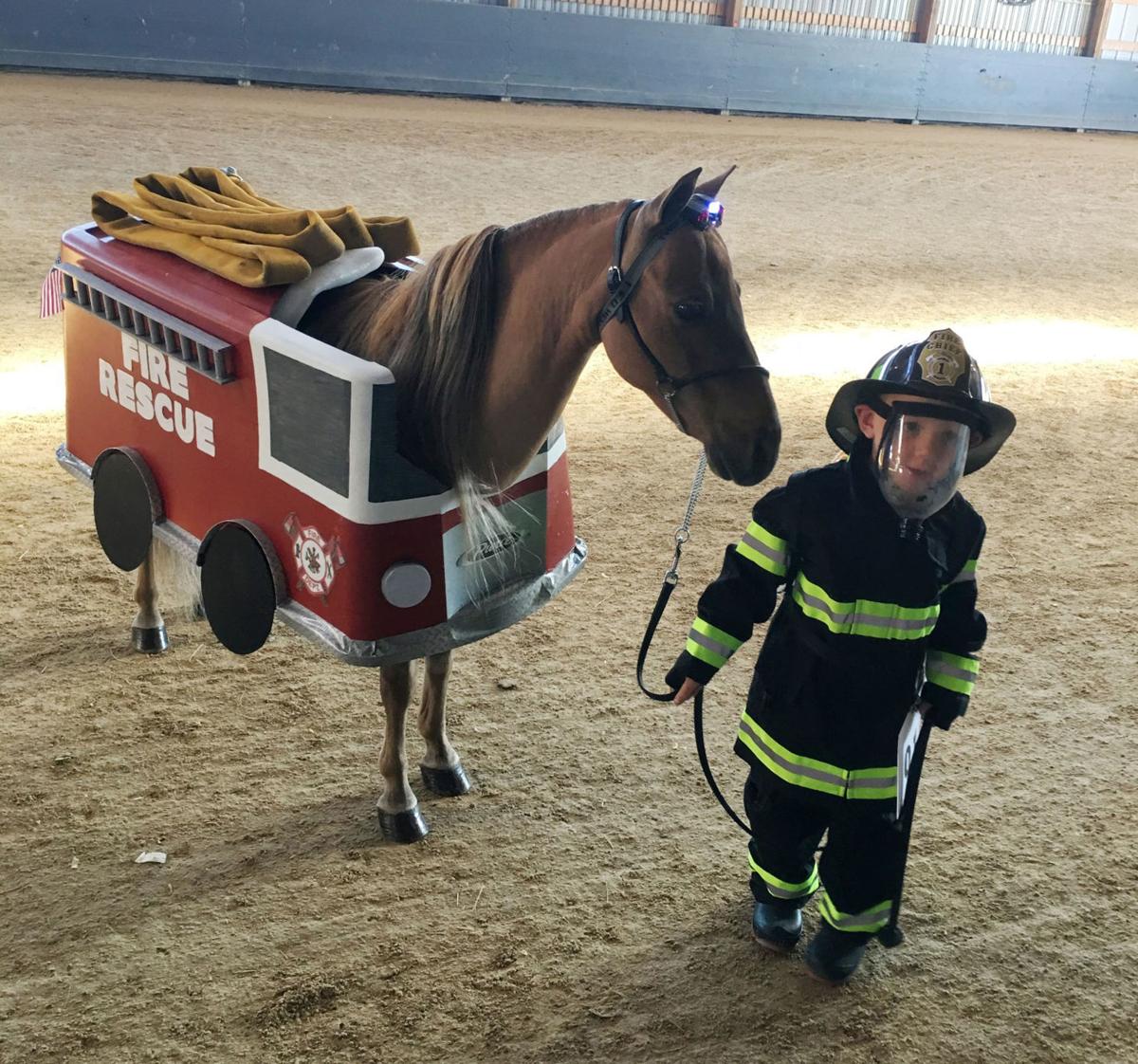 Prince, the equine fire engine, was equipped with an actual fire hose and flashing lights as he and firefighter Brantley Beilke took part in the costume class at the North Eastern Wisconsin Miniature Horse Club’s Halloween Fun Show held Oct. 24 at the KFME Stables near Pulaski. 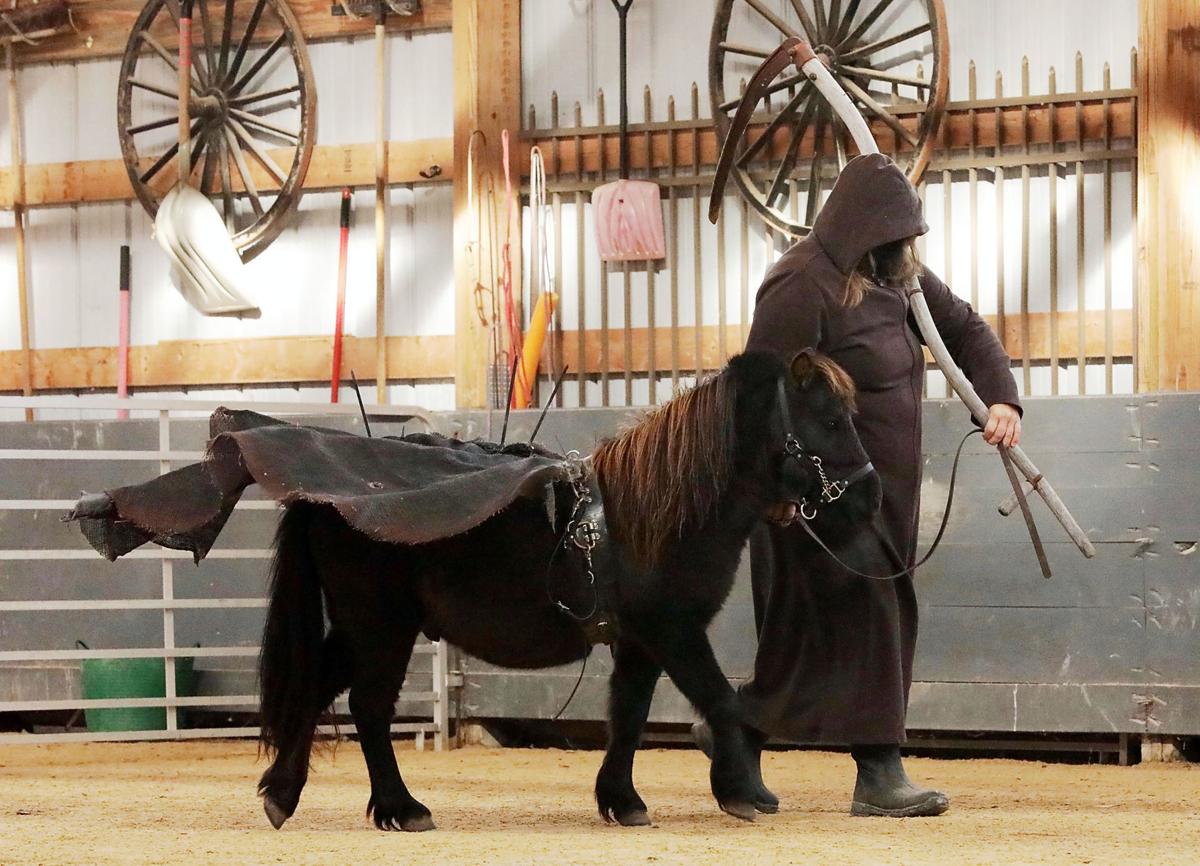 Prince, the equine fire engine, was equipped with an actual fire hose and flashing lights as he and firefighter Brantley Beilke took part in the costume class at the North Eastern Wisconsin Miniature Horse Club’s Halloween Fun Show held Oct. 24 at the KFME Stables near Pulaski.

At North Eastern Wisconsin Miniature Horse Club’s Halloween Fun Show, the diminutive horses were a big hit. They and their exhibitors were definitely in the Halloween mood dressed in costume and ready for some playful activities.

Exhibitors, both young and those young-at-heart, competed in the Oct. 24 show at Tom and Linda Kuczer’s KFME Stables near Pulaski. Fourteen competitors ages 6-68 showed their 20 horses vying for sweet prizes in a variety of classes.

“It was really fun and definitely a good treat after not being able to show this year,” said Sammy Kuczer.

In addition to the costume class, the show featured traditional halter, speed events and driving as well as other unusual classes such as driving egg and spoon, egg stomp, best winter hair coat, and liberty.

In the liberty class, each exhibitor and an assistant brought the horse into the center of the arena. Then music of their choosing played over the sound system as they release their horse and let the horse run free around the whole arena for one and a half minutes.

“After that time is up, you have up to two minutes to catch your horse,” said Erica Beilke, NEWMHC secretary. “This is judged on the beauty of the horse. You want the horse to run in both directions at a trot, extended trot, canter and ease of catching.”

“By just looking at them, you can pick out the ones with the longest, thickest, fluffiest coat that is going to keep them nice and warm this winter,” Beilke said.

In the driving egg-and-spoon class, exhibitors carried an egg on a spoon held in their mouths while guiding their horses through the various gaits and maneuvers such as reverse. The last one with the egg still on the spoon is the winner.

Young exhibitors urging their horses to step on an egg in the egg stomp class was a crowd pleaser.

“Watching the youngsters trying to get their horse to stomp an egg really got the laughter going,” Vande Hei said.

NEWMHC was organized 1993 and become an official club in Wisconsin in 1997. It was started so enthusiasts could get together and share their love of miniature horses. This year, the organization has about 25 families from all over Wisconsin and one from a surrounding state in its membership.

Beilke says the miniature sized horses are attractive to horse enthusiasts who want to have horses but aren’t comfortable with full-sized animals.

“For most of the members, it was health reasons like getting older and physically not able to work with big horses,” Beilke said. “They wanted something smaller for their kids to learn on, or a riding accident that ended their riding career. They still loved horses with a burning passion but needed something a little more accommodating to their needs. Minis are less work, less likely to hurt you (but still can), and take up less space.”

The small horses with big hearts also allow the owners to engage in activities large horses might find difficult to do.

“Our members love to do anything and everything that they can with their miniature horses,” Beilke said. “Shows, clinics, horse demonstrations, parades, trail drives, therapy animals where they take them to nursing homes, hospitals and schools. We take them trick or treating with us in town, and one of my minis is the mascot for one of the fire departments I am on. So any time the fire engine goes to an event, my horse goes too.”

More information about NEWMHC can be found on Facebook.