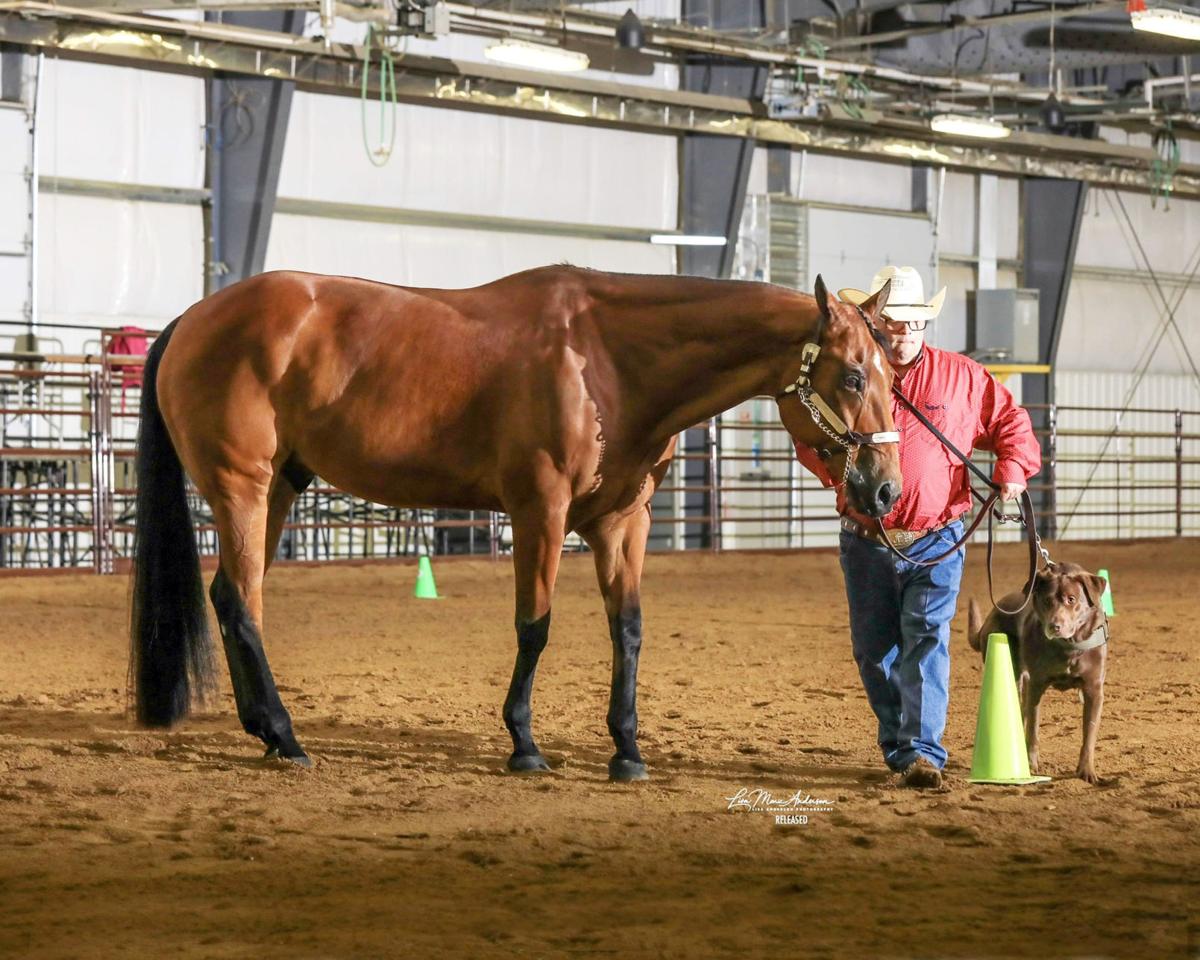 Equestrian With Disabilities showman John Greenan leads American Quarter Horse Association gelding Terms On The Moon “Cappuccino” in an EWD showmanship class with his service dog, Buggs, at his left side. The trio has competed in EWD classes after AQHA permitted the competitor to have his service dog become part of the team. 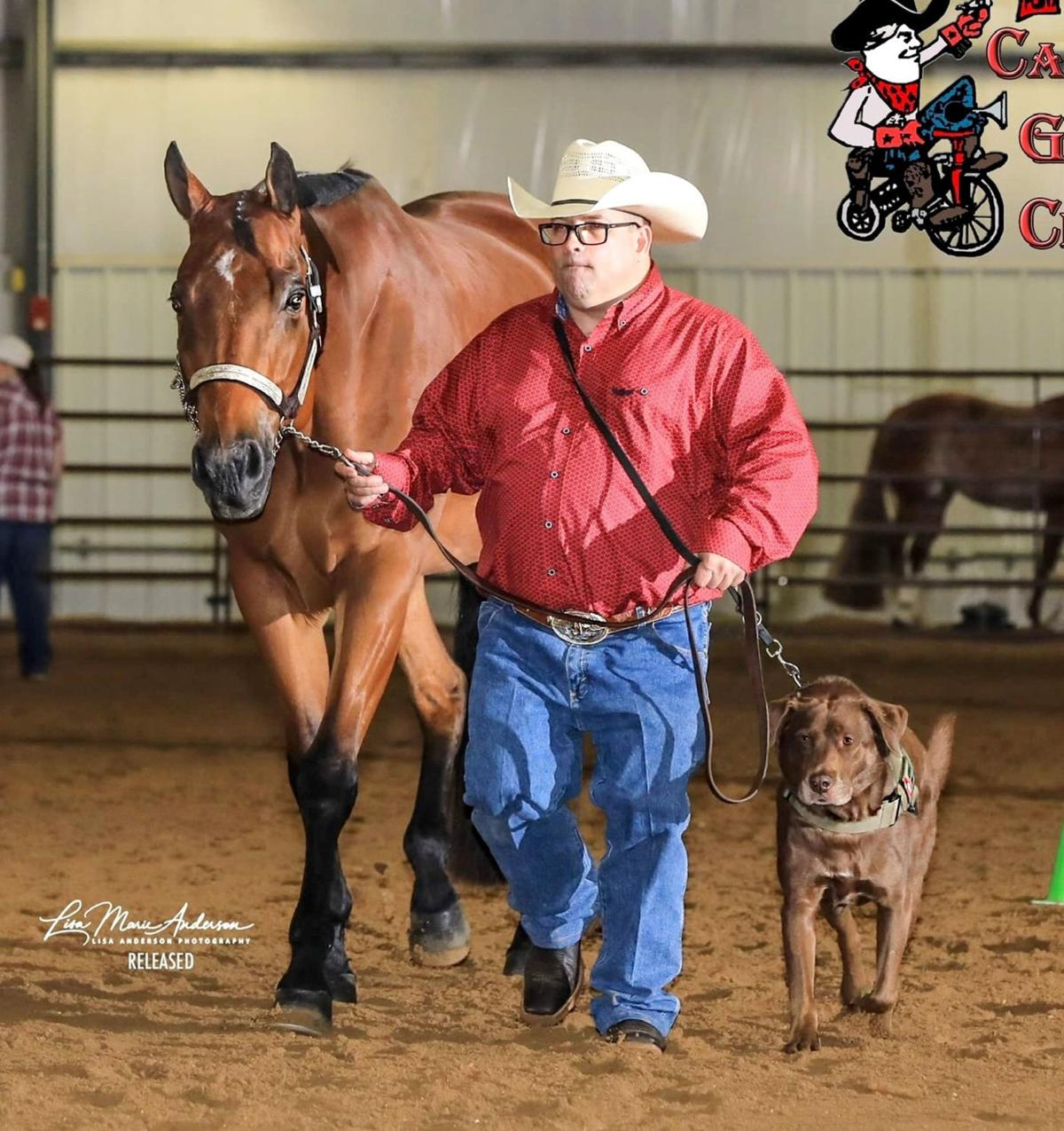 John Greenan performs a showmanship pattern in an Equestrian With Disabilities class with American Quarter Horse Association gelding Terms On The Moon (aka Cappuccino) and his service dog, Buggs.

Equestrian With Disabilities showman John Greenan leads American Quarter Horse Association gelding Terms On The Moon “Cappuccino” in an EWD showmanship class with his service dog, Buggs, at his left side. The trio has competed in EWD classes after AQHA permitted the competitor to have his service dog become part of the team.

John Greenan performs a showmanship pattern in an Equestrian With Disabilities class with American Quarter Horse Association gelding Terms On The Moon (aka Cappuccino) and his service dog, Buggs.

When John Greenan, his dog and horse enter the showmanship arena, none dares call it a “Dog and Pony Show.” Greenan, of Orland Park, Illinois, competes in Equestrians With Disabilities showmanship classes with his animal partners.

With Terms On The Moon (aka Cappuccino) on his right and his chocolate Labrador, Buggs, on his left, Greenan has showed in EWD classes as well as open show classes.

In his journey to reach his dream of showing in top level American Quarter Horse Association shows, Greenan has become a bit of a celebrity in the Cap Gun Horse Show circuit.

“When the word got around (that he was going to show), everyone said, ‘This is cool and we want to see this,’” said Greenan.

In order for Greenan to compete in the Cap Gun Horse Show with his service dog at his side, he had to ask permission from AQHA. The organization gave him the OK to have Buggs accompany him in showmanship classes. With this approval, they plan to compete in the show in Oshkosh June 16-20.

The former paramedic fireman qualifies to compete in the EWD classes because of a myriad of health issues. About 20 years ago, Greenan was on the job at an accident scene when a drunk driver entered the response team’s location and hit Greenan. The first responder was hospitalized for over a year. His recovery included having to learn to walk and talk again.

On top of having to cope with the traumatic brain injury and post-traumatic stress disorder, he now struggles with multiple sclerosis, bipolar depression, lupus, bacterial meningitis and cancers.

As part of his treatment, Greenan asked his doctors if he could add equine therapy to his regimen. Greenan took riding lessons when he was young and wanted to see if horses and riding could help him with his recovery.

Receiving doctors’ OK, Greenan connected with Lorri Ebeling of Nova Quarter Horses for help. Ebeling had worked with special riders and includes EWD classes in the shows held at her barn.

“I had already been teaching an adaptive riding program with only private lessons,” said Ebeling, “but they were high functioning riders and I had them loping and doing more things than an actual riders with disability programs have to offer. I guess I felt the passion John was showing me made want to teach him to compete at a higher level and also that AQHA was offering those type classes in our bigger shows.”

Greenan first met Buggs when he was a director with an animal shelter and Buggs was brought into the shelter as a puppy. The dog proved to be a difficult placement because of separation anxiety issues. However, an evaluation by a service-animal training business determined Buggs would be a good match for Greenan.

“The trainer said she never saw a dog and person who needed each other as much as we did,” said Greenan.

Cappuccino, a 19-year-old American Quarter Horse Association gelding is now owned by Olivia Rydzewski and is on loan to Greenan. The veteran show horse likes dogs and seemed to hit it off right away with Buggs. Ebeling was sure he was just the right equine for the job to help Greenan achieve his horse-showing goals.

“It wasn’t easy at first, but John put his time in and I’m looking forward to see what we will have now that he is able to go back to shows,” said Ebeling. “COVID and his many surgeries have kept him out of the show pen.”

While Greenan had planned to “rock AQHA in 2020,” that didn’t happen. It wasn’t due just to most shows being canceled. During the gap year, Greenan underwent eight surgeries due to complications connected with multiple sclerosis.

While the surgeries kept Greenan out of the saddle, Ebeling wasn’t going to let Greenan stay on the sidelines.

“Lorri said, ‘You can stay in the game. We’re not putting you on the back burner because you can’t ride. I’d like to teach you halter,’” said Greenan.

The new game plan was to focus on showmanship and halter classes and to train Buggs in his role. The effort resulted in the team becoming the only one of its kind in the country.

“Buggs wears a harness and was trained to correct my balance,” said Greenan. “If I lean to one side, he bumps me to get me straightened out.”

Buggs is trained to lie at Greenan’s feet when they set up in showmanship. In one class, Greenan recalls how Cappuccino nuzzled Buggs’ head. Greenan said the judge noted the display of affection “was really unfair” (because of the tug at emotions).

Throughout his ordeal, the dream of showing again kept Greenan going. After eight weeks of surgery, he was back up on a horse.

EWD classes are open to qualifying individuals. Although John qualified, he had to make a special request to allow Buggs to accompany him and Cappuccino in the show ring. The association granted the request for showmanship classes.

Greenan’s first AQHA show was two years ago at the Cap Gun Horse Show in Madison. He placed second and fourth in riding, competing in classes of eight to 10 riders.

The Cap Gun Quarter Horse circuit began 40-plus years ago; it got its name because it was held over Fourth of July holiday. Starting at Meri-J Stables in Beloit, the show grew over the decades. Because of the growth, it’s moved to various locations to accommodate the increased number of exhibitors.

“The EWD classes started about ten years ago,” said Pat Miller. “The American Quarter Horse Association and the National Snaffle Bit Association saw the need for these classes because of the desire for all riders to compete on a level playing field.”

“Because of these programs, these horses are still a valuable asset,” said Miller. “These horses have been there, done that and are reliable, safe partners for people who may not have full function of their arms or legs but want to compete.”

A sizable number of exhibitors entering the classes come from therapy programs. There are classes where people show independently and classes where exhibitors are assisted with one or two people walking along-side the horses and their riders.

Information about the Cap Gun Show circuit can be found on its website at http://capgun.timzhsm.com or on its Facebook page.