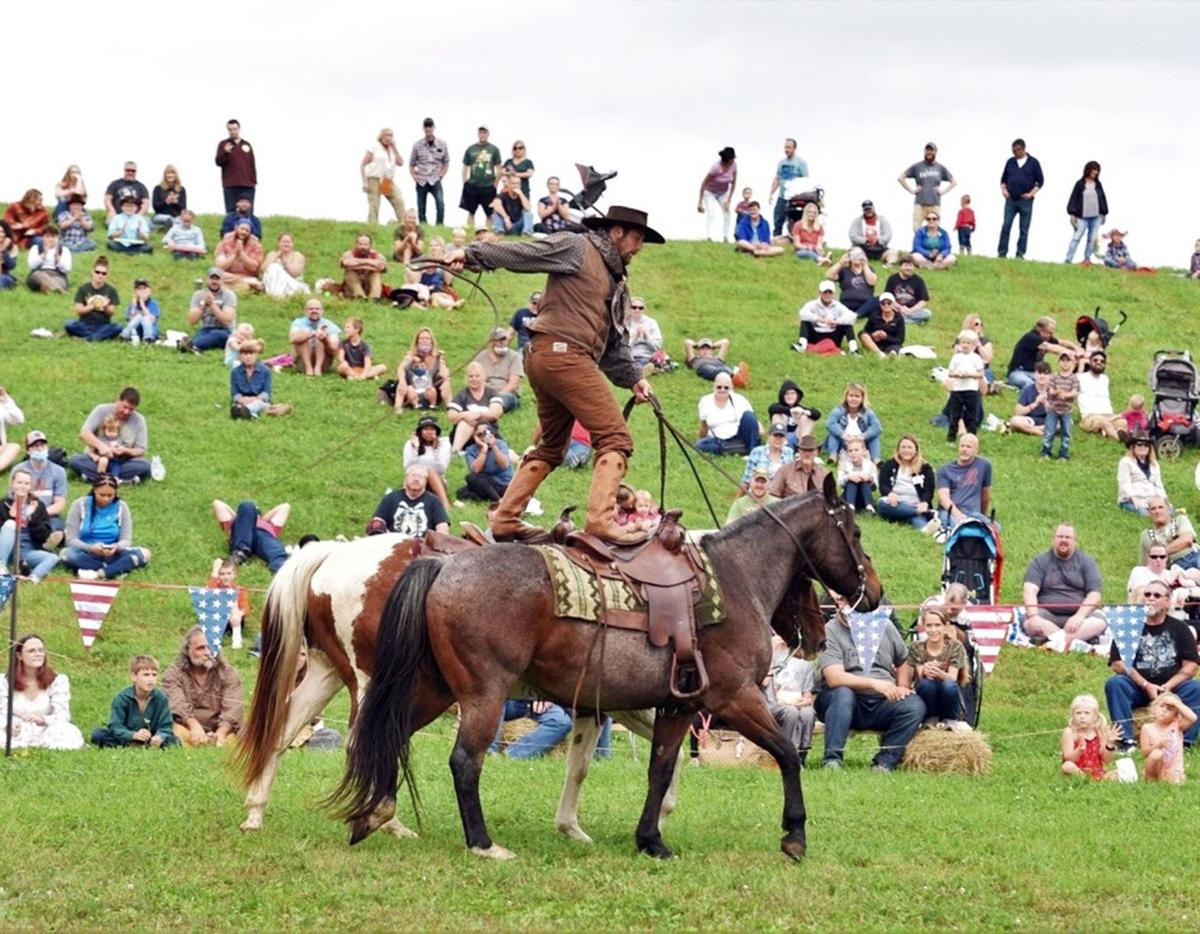 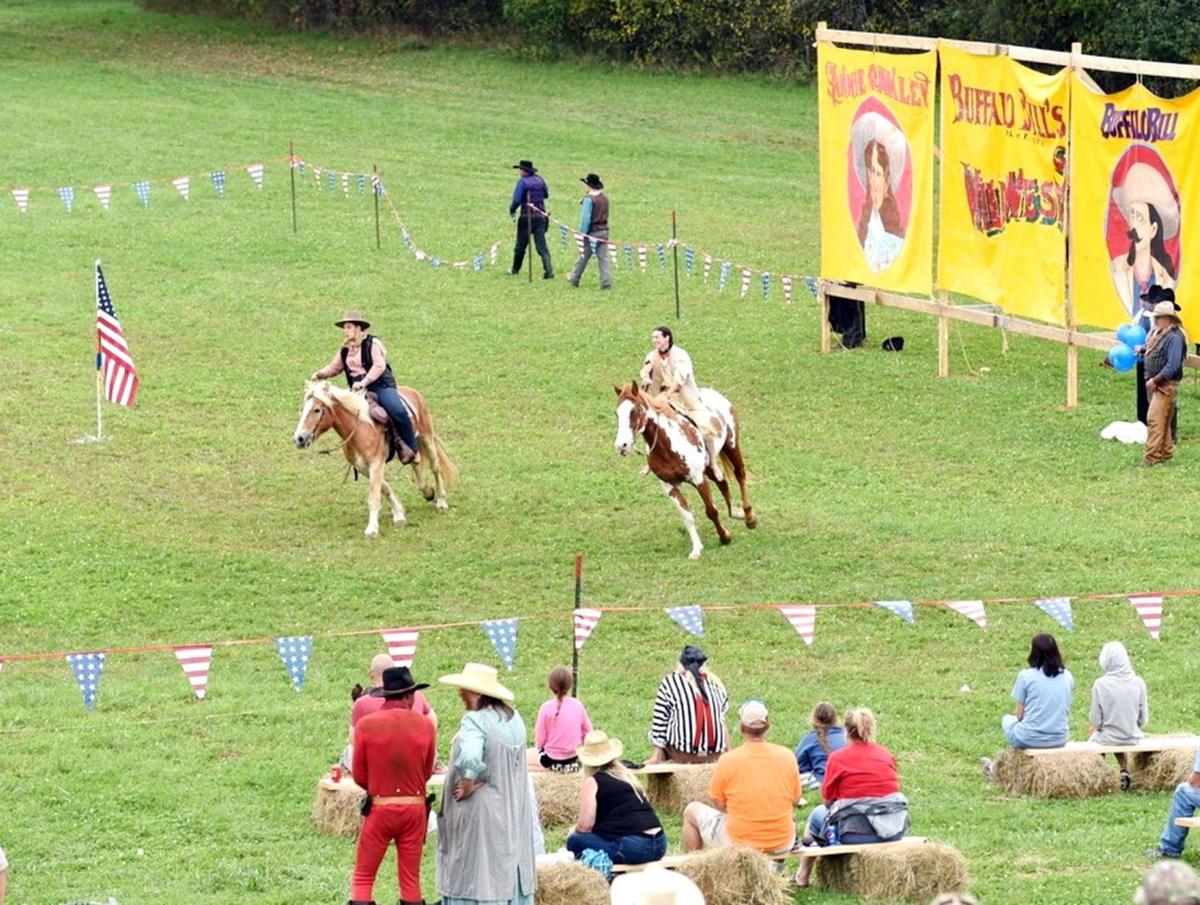 A cowgirl and Native American woman face off in a head-to-head match race during the Buffalo Bill’s Best of The Wild West event held at Woodside Ranch’s Frontier Fest Sept. 26-27.

A cowgirl and Native American woman face off in a head-to-head match race during the Buffalo Bill’s Best of The Wild West event held at Woodside Ranch’s Frontier Fest Sept. 26-27.

American frontier life was on display at Woodside Ranch during Frontier Fest held Sept. 26-27. The first-time fest was held by a group headed by Wayne Rettig and John Rogers as a new outing for visitors and guests of the Mauston dude ranch.

“There’s a lot they can see and learn and get to explore the (life in the American) frontier,” said Rettig, aka Buffalo Bill. “We tell the people who come out, if it wasn’t for you coming to watch, we would be history.”

An estimated 800 visitors took in the weekend fur trade encampment and Wild West show. Along with Wisconsinites, Illinois folks traveled to take in the two-day event with the majority taking advantage of Saturday’s pleasant weather.

“One woman came three hours from Illinois with her granddaughter,” Rettig said. “A lot of people who came said they had the opportunity to see something they don’t usually get to see. We’re keeping this part of history alive.”

The fest offered visitors a glimpse of life during the 19th century, including a fur trade rendezvous of the early decades and a re-enactment of Buffalo Bill’s Wild West show performed before audiences during that century’s later years. Visitors could walk through a pre-1840s rendezvous encampment to get up close and personal with fur trader re-enactors.

Along with showing how the fur traders lived and camped when they gathered to trade furs for supplies, the re-enactors held competitions such as muzzle loading and (toma)hawk throwing.

A crew of around 80 people and 25 to 30 horses joined forces to reenact the famed Wild West era extravaganza put on by frontiersman Buffalo Bill Cody during the late 19th century and early 20th century.

Cody took his live-action show around the country and overseas during the later days of the 19th century and early 20th century. The show re-enacted Native American and settler interactions as well as buffalo hunts and cattle drives. Cody brought the show to Wisconsin 65 times during its run.

The historic show and the modern-day version featured sharp-shooters demonstrating their prowess at hitting targets while horseback and from the ground. During the modern fest, renowned sharp-shooters Annie Oakley portrayed by Cathy Wagner, and Johnny Baker, the Cowboy Kid portrayed by Nick Miller, were among the performers in the hour and 20-minute daily performances. Other acts included trick riders and a Gatling gun demonstration.

Keeping the show as authentic as possible, a rare Mexican War era cannon was fired to alert visitors the show was about to start.

“The cannon is all brass,” Rettig said. “Most of the cannons of that war were melted down during the Civil War for other things. Ken Monroe of the 10th Wisconsin Artillery Battery owns the cannon.”

The loud cannon blast didn’t seem to faze the horses as much as might be anticipated.

“The horses flinched, but they didn’t mind it as much as I thought,” Rettig said. “I figured that so much concussive force was like thunder, which the horses have experienced. A lot of coordination is involved from a safety perspective. We want to serve up plenty of family fun and adventure for the public, while keeping things as safe as possible for all concerned.”

“People wanted to get out someplace where they could be less concerned about COVID” Rettig said.

Woodside Ranch, a family owned business, operates a resort and conference center on 1,200 acres in the Lemonweir River Valley. Some of its cabins were constructed in the 1850s, offering guests a truly rustic getaway.

“In the early 30s, it was a dude ranch with people from Chicago coming up to play cowboy,” Rettig said. “Today, they still have a huge trail riding operation with special activities such as breakfast outings.”

In addition to trail and hay rides, the conference center offers a petting zoo and pony rides, a lake for fishing and boating, outdoor activities such as nature hikes, archery and volleyball, an outdoor pool, fitness center, theatre, cocktail bar, dance hall and game room.

The trail ride concession was a popular feature during the Frontier Fest with folks eagerly waiting for a chance to experience the mode of travel of bygone days.

Woodside Ranch is planning to hold the event again next year, with dates to be finalized in the near future.