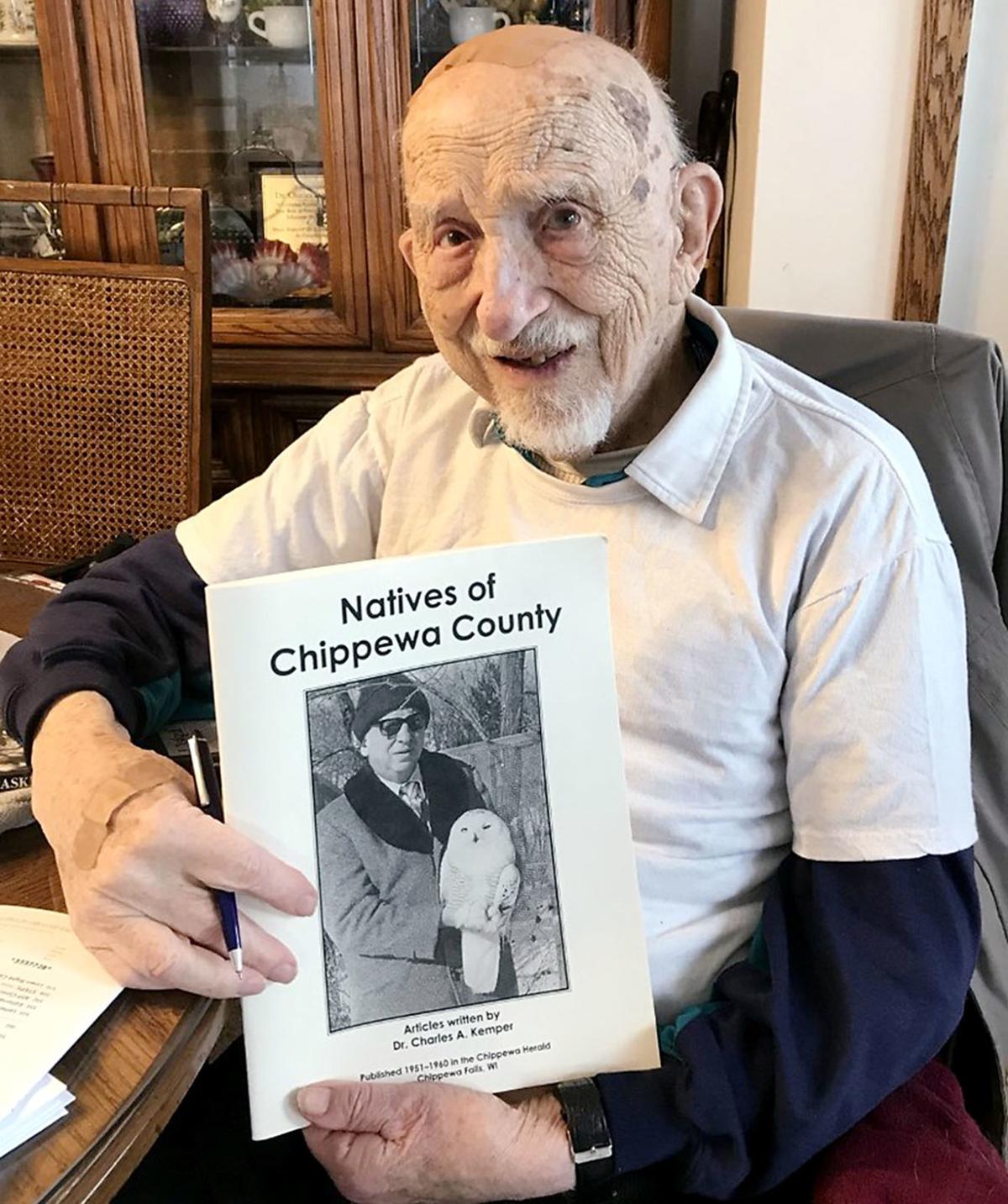 Charles Kemper, 100, hung up his stethoscope in the early 1990s, but he’ll be a bird lover forever.

Generations of Chippewa Falls children knew family doctor Charles Kemper as “the bird man.” Southside kids like me often rode our bikes through the alley behind his Maple Street house just to get a glimpse of the caged raptors he fostered, including a turkey vulture named “Maurice.”

Doc Kemper turned 100 years old in December. An MD for so long, the babies he delivered grew up to have babies — and he delivered those too. He once called medicine his “vocation” and bird study his “avocation.” He hung up his stethoscope in the early 1990s, but he’ll be a bird lover forever.

As a licensed volunteer for the U.S. Fish and Wildlife Service, Kemper captured birds in nets on his own 80 acres of Chippewa County forest and attached tiny aluminum or stainless-steel ankle bracelets around even tinier legs. The image that comes to my mind is a monitor for house arrest, though the purpose of banding is the opposite of home confinement for felons: fly away so we can trace your route. Birds are caught again elsewhere so their movement can be reconstructed, then they are released in a game of avian tag that sometimes spans continents.

All data — which offer clues on migration, behavior, reproduction, lifespan and survival — are sent to the U.S. Geological Survey’s Bird Banding Laboratory. Kemper donated all of his land to the Chippewa County Land Conservancy after he spent seven decades banding 110,000 birds. “Kemper’s Woods” is enjoyed by the public year-round.

Doctoring and birding were intertwined for Kemper almost from the beginning. His first interest in “feathered friends” was sparked out of boredom as an Army Air Corps flight surgeon whose trip across the Pacific took 30 days, often skirting a typhoon that churned up three-story waves. He passed mundane hours on board ship by watching the majestic albatross and other seabirds. He still recalls how the fulmars and shearwaters flew “straight as an arrow” a few feet above the sea.

“When you’re all alone,” Kemper wrote 15 years after World War II, “just a speck floating on the great ocean, you soon find a kinship to other living things that keep you company.”

Kemper grew up in Baltimore. After medical school he was drafted and sent to military training in Texas, where he met Wisconsin native Margaret Johnson. They married in July 1945, just three weeks before he shipped out. Though the war ended while he was at sea, he continued on to Okinawa. After his military service and further training at Harvard, he and Margaret settled in Chippewa Falls, and Kemper began his career as a general practitioner.

“We did everything,” he told the Wall Street Journal in 2018. “We delivered babies and did appendectomies and gall bladders.” He considered himself a “country doctor.” For over 40 years he made house calls, almost unimaginable given today’s HMO’s and medical centers so big they have separate “campuses.” In 1982 I pedaled to his home office for a sports physical with the $3 payment in my sock. Today that visit may cost 100 times more.

One former patient, Brad Sweitzer, told me, “Dr. Kemper helped my mother bring me into this world, and he was my doctor for many years.” As a kid Brad sliced his tongue on a door hinge, and Kemper stitched him up. This freak accident — I would guess Brad never again ran in the house with his tongue out — was worthy of documentation. When teenage Brad went for an appointment, Kemper showed him the photograph of his injured tongue.

Back then making house calls and knowing patients, birth through adulthood, were part of a small-town doctor’s role. Even today, wherever he goes, people still thank Kemper.

Not long after he moved here, he founded the Chippewa Wildlife Society to promote sanctuary and refuge to animals. Word spread.

A farmer once showed up in Kemper’s office cradling a colt with a broken leg. A veterinarian suggested putting it down, but Kemper set the leg with four Reader’s Digest magazines and a plaster cast. Even local game wardens brought wounded creatures his way. St. Joseph’s Hospital allowed him to X-ray birds. Year after year, his backyard was full of on-the-mend fowl and other critters. While one of his human patients was in labor, Kemper carried an injured chipmunk in his lab coat pocket. He swears that mother named her baby “Chip.”

After a roadrunner hitched a ride in an open U-Haul with a couple moving from California to the Chippewa Valley, Kemper nursed the dehydrated and starving “ground cuckoo” by feeding it minnows. Kids from all over town came to see this bird — exotic for Wisconsin — and ask why it didn’t say “beep-beep” like in the cartoons. Roadrunners don’t migrate, so this stray rode back home to Twenty-nine Palms on a Delta flight; a park ranger released it into the wild.

From 1957 to 2002, Kemper or a helper visited a local TV tower daily during spring and fall migrations to count birds that had collided with the thick guy wires which hold up communication towers. The worst night, he says, birds fell from the sky like rain. I get a lump in my throat when just one of my beloved black-capped chickadees or American finches flies into our picture window. Who can imagine the horror of counting over 10,000 dead bodies by hand?

“I guess if I wasn’t such a nut, I wouldn’t have bothered with it,” he told Duke University’s alumni magazine.

One might say “obsessed.” I do the math: migration seasons last at least 30 straight days, so 60 days for 45 years. Those 2,700 days mean that Kemper spent over seven years of his life waking up before dawn to count avian deaths. In 1996 he published a paper about his findings in The Passenger Pigeon, The Wisconsin Society for Ornithology’s journal. Even as a “citizen scientist,” Kemper’s decades-long study was well respected by bird specialists around the country, including Chandler Robbins, senior author of Birds of North America, who acknowledged Kemper’s work as a major contribution.

He counted live birds too. He organized the first Christmas Bird Count in Chippewa County and participated for 58 years, almost half of this Audubon Society-sponsored event’s 120-year history. Kemper’s 2007 book, Birds of the Chippewa Land: Long-term Study of Bird Population in Chippewa, Eau Claire, and Neighboring Counties, further documented his work. He also published nine years of his newspaper column in the collection Natives of Chippewa County. The centenarian tells me, “There is a story for each species.”

To call him a “birder” is like saying Fred Astaire was a “fine dancer” or Kobe Bryant was a “pretty good ball player.” There is no telling the number of lives Doc Kemper helped save: from young soldiers to Chippewa county residents — human and animal — to billions of birds flying through Wisconsin, cared for and counted by the bird man.