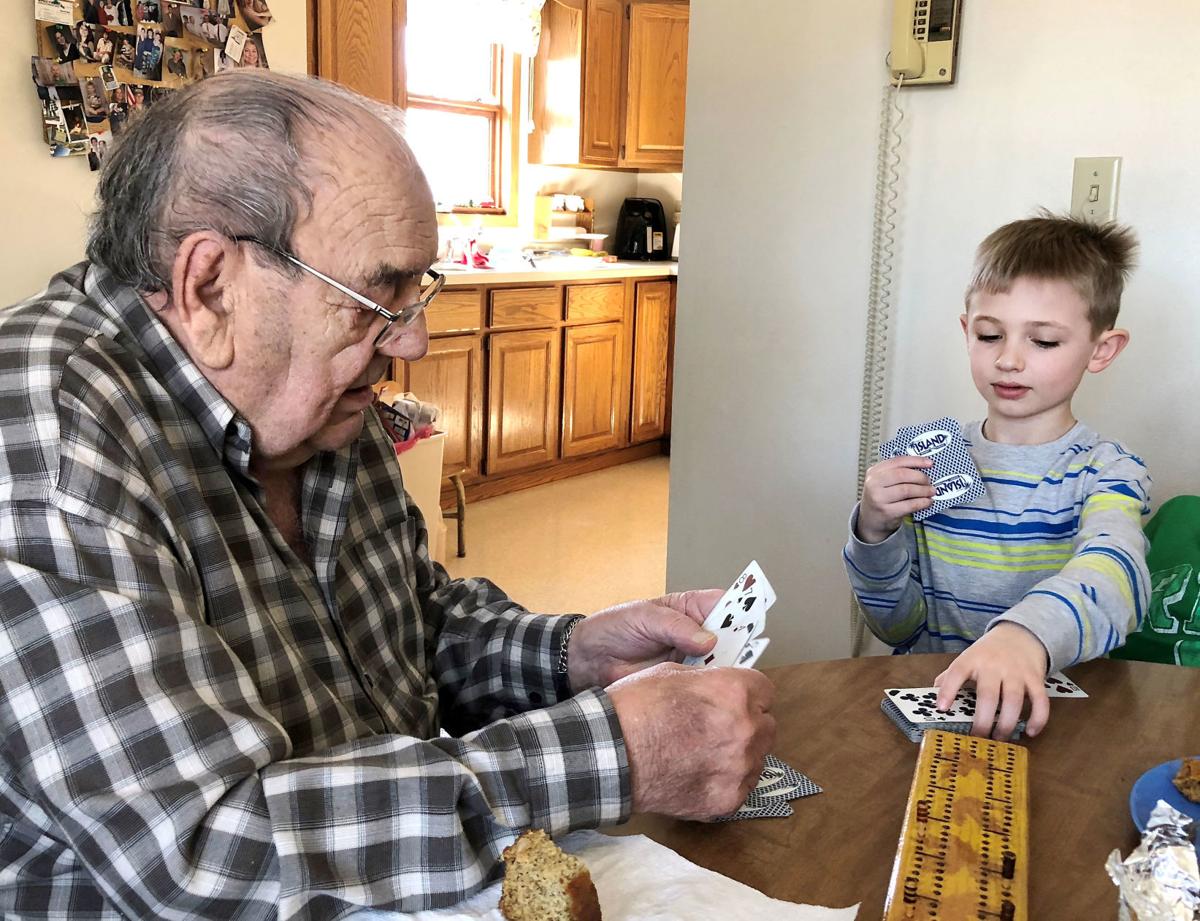 Like many Chippewa Falls kids, I perfected my counting skills playing cribbage: “15-2, 15-4, 15-6, and six more is a doz.” As the youngest of eight, games like 500 Rummy, Sheepshead and cribbage were the only way to compete with siblings two or three times my age. We sometimes saw black and white photos of the Kennedys playing football on the rambling front lawn of their Hyannis Port estate. The Sees moved dirty dishes and heaping ashtrays to one side of the kitchen table and played cribbage in our cramped Chippewa Falls home.

The summer I turned nine, I was playing my older brother and winning by a huge margin. Did I have a “perfect 29” cribbage hand, four 5s and a jack, the highest possible score in one deal? Let’s say I did, and I was little-sister-loud about it. “Skunking” it’s called, when you win by 31 points or more. I don’t remember our exact exchange but I am sure I was a haughty winner, a character flaw I still recognize in myself.

Down the homestretch, did I yell “Skunk!”? Let’s say I did. Brother had enough. He slapped my face. My Juicy Fruit flew across the room. I instantly started to wail, more from surprise than anything. Mom came running from the kitchen. I plumped out my lip in her direction and pointed to my gum on the shag carpet. Five-foot-nothing Mom stormed toward gangly teen brother, screaming into his chest. Brother ran out the back door and squealed away in Dad’s boat-like Chevy Impala. I cried harder at such big drama. Nothing like this happened before or since, which is why I still laugh about it.

This Saturday night, my husband, Bruce, and I have a drink and play on a board my father made for me when I got married the first time, a 30-year-old relic. Dad crafted cribbage boards out of scraps he picked from the trash, wood from a neighbor’s fallen tree, or existing boards from thrift sales which he repurposed by covering up “Las Vegas” or “Wisconsin Dells” with his own painted alphabet noodles and shellac. Many seem works of folk art now, family heirlooms even. Others are still gag gifts. Unlike 19th century Eskimo, who fashioned cribbage boards from walrus tusks, Dad made some of his out of used toilet seats. He scavenged neon colored pegs from old Lite-Brites, something Sir John Suckling, British poet and gambler, could not have imagined when he invented cribbage early in the 1600s. Settlers brought the game from England to America. Originally played primarily by men, in Wisconsin cribbage intersects with the family tavern, with camping and dorm rooms, and more recently with coffee shops and microbreweries. As always: cheap, fun and easily portable.

Tonight as I count my cribbage hand, I say playfully to Bruce, “Hmmph. Twenty-one points. Is that all?”

He teases, “Think I could get your brother to come over and teach you a lesson?” Point taken loud and clear: sore losers are bad but poor winners are worse.

Years into my mother’s Alzheimer’s diagnosis — when she couldn’t even count coins — Dad still took her to cribbage tournaments every Saturday at a rural tavern, Four Corners (now Joel’s 4Corners). One time, in the midst of a round against rival partners, she asked Dad, “Have I played this game before?” He nodded. “This is fun,” she exclaimed. They went on to win the tournament, all muscle memory on her part. Did the competition wonder if my parents’ strategy was an octogenarian shake down? No one would have known that for this old man, playing cribbage with his wife made life seem almost normal. Maybe she wasn’t really slipping away.

When climbing stairs became too challenging for Dad to leave home, he played cribbage for money with his friend Wayne, who showed up at Dad’s twice a week for four years. The two of them swapped the same 7 bucks back and forth up until Dad died six months ago.

I don’t recall teaching my 28-year-old son to play cribbage, which means he likely learned the way I did: from watching.

April 2016 I get the second-worst phone call a parent could receive: accident, brain bleed. The worst call is a dead child; I am shocked but hopeful as I book a flight to Texas and pack within minutes. Out of habit, I throw in my travel cribbage board, as necessary as a toothbrush when I leave home. Twelve hours later I exit my last plane and spot a uniformed police officer at the end of the ramp.

This is it: my son is dead. I steady myself on the railing. The officer immediately speaks of Alex in the present tense and rushes me to his trauma unit room.

Alex’s face is unrecognizable: purple eyelids puffed shut, alien head swollen twice its size and wrapped in a blood-stained bandage. Only my son’s nose is familiar to me. When a doctor explains Alex’s skull fracture, I visualize cracking an egg on a curb. But unlike Humpty Dumpty, Alex will heal.

That trip the cribbage board lay in my bag for days, a talisman, reminder of better times. A few weeks later I visit after Alex’s release from a traumatic brain injury rehabilitation center. I bring along one of Dad’s homemade cribbage boards he chose just for his grandson, all sleek wood and perfectly drilled holes. Alex and I play at his kitchen table, late on a Saturday afternoon. I am on high alert: what skills has he lost? Can he still understand the complexities of this game? Of life? Part of Alex’s rehab homework means doing Sudoku and reading, both of which he breezes through but hates. Cribbage is fun — not really a test.

Ten minutes into our first round I’m about 25 points ahead. How can I skunk a guy with a head injury? I try not to fixate on the 12-inch incision on the top of his head, like stitching on a basketball, a lifesaving “bone flap” where surgeons cut his skull apart to relieve pressure on his swelling brain. I want to throw the game, but I’m getting the best hands ever. Alex slowly comes from behind, whooping at me as he passes my red peg with his green one, counting out loud dramatically. His East Coast roommate comes down to see our Wisconsin family ruckus. I take it all in: my slow demise on this cribbage board — a treasure made by my father, one my son might someday play on with his own kids — Alex’s lightning-quick counting and wise moves to beat me.