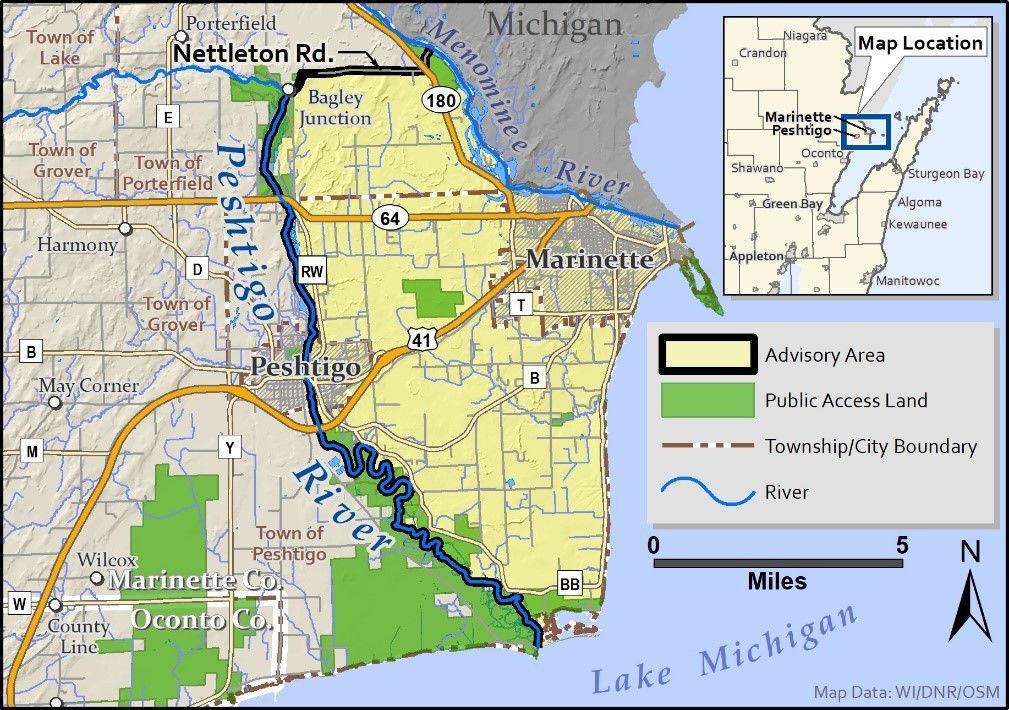 Following DNR findings of PFAS in deer liver in Marinette, Peshtigo and surrounding communities, DHS has issued an advisory against the consumption of deer liver from animals harvested with five-mile radius of JCI/Tyco Fire Technology Center. 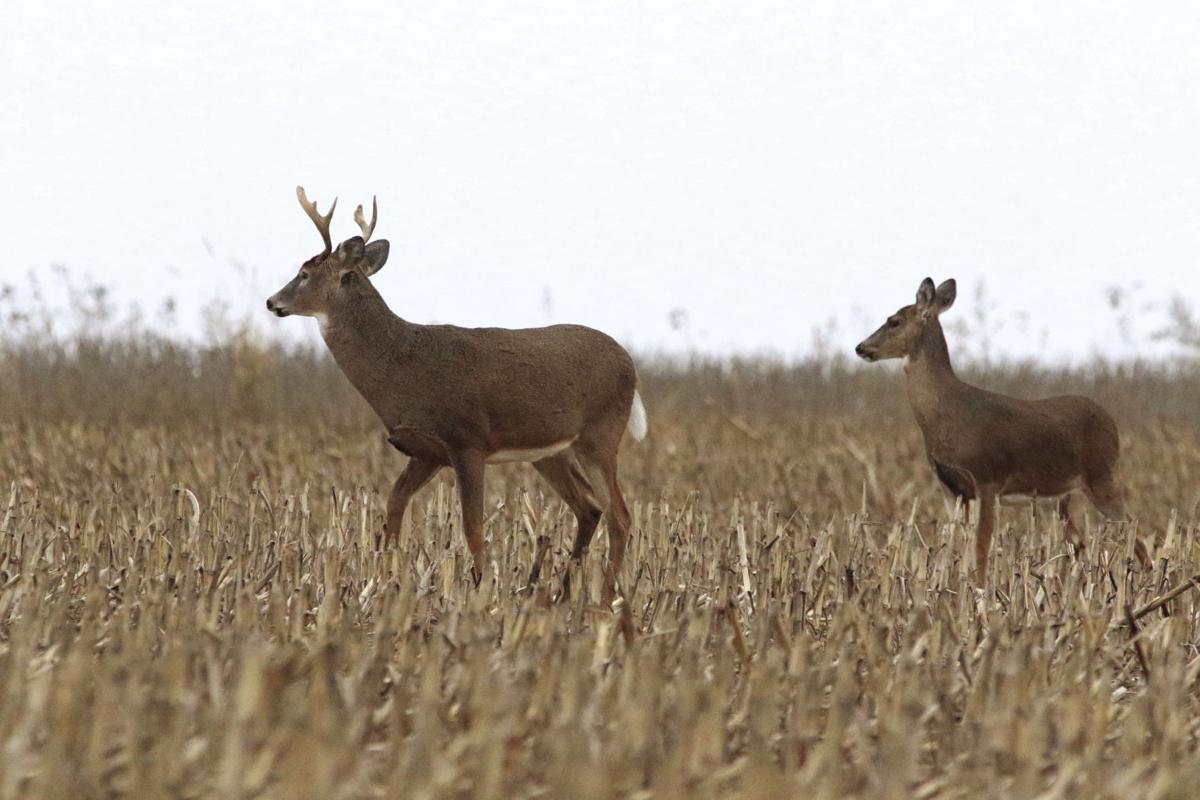 The Wisconsin Department of Health Services has issued an advisory against the consumption of deer liver from animals harvested with five-mile radius of JCI/Tyco Fire Technology Center.

Following DNR findings of PFAS in deer liver in Marinette, Peshtigo and surrounding communities, DHS has issued an advisory against the consumption of deer liver from animals harvested with five-mile radius of JCI/Tyco Fire Technology Center.

The Wisconsin Department of Health Services has issued an advisory against the consumption of deer liver from animals harvested with five-mile radius of JCI/Tyco Fire Technology Center.

Firefighting foam chemicals have been detected in deer in northeast Wisconsin, prompting state officials to warn hunters to not eat livers from deer harvested in the Marinette and Peshtigo area.

The Wisconsin Department of Natural Resources and Wisconsin Department of Health Services issued a do not eat advisory Sept. 15 for the liver from deer harvested in close proximity to source of PFAS-contaminated soil, groundwater and surface water. The do not eat advisory accompanied a Sept. 15 DNR report detailing findings of PFAS in the liver of deer harvested and analyzed from the JCI/Tyco Fire Technology Center in Marinette.

Following this announcement, the DNR and Wisconsin Department of Health Services issued a do not eat advisory for the liver from deer harvested within 5 miles of the JCI/Tyco Fire Technology Center. This includes areas of Marinette, Peshtigo and surrounding communities. The FTC is located at 2700 Industrial Parkway, Marinette.

“We want to be clear that people should feel comfortable eating venison from deer they’ve harvested near this area,” said Tami Ryan, DNR wildlife health section chief. “We just advise they do not consume the liver.”

Per- and polyfluoroalkyl substances are man-made chemicals used in industrial processes and manufactured products. PFAS don’t break down easily and can remain for a long time in the environment where people can be exposed to them. PFAS can accumulate in the human body slowly over time through repeat exposure. High levels of PFAS in the body are harmful to human health, especially to the health of pregnant women.

According to the DNR, two specific PFAS, perfluorooctane sulfonate (PFOS) and perfluorooctanoate (PFOA), are the most studied PFAS chemicals. Current studies of PFOS and PFOA suggest that exposures at high levels may increase cholesterol levels, increase the risk of thyroid disease, decrease female fertility and increase the risk of high blood pressure in pregnant women. EPA research suggests that some PFAS may have the potential to cause cancer, but studies linking the two have not been consistent.

Due to high interest from the community, the DNR conducted a study on PFAS levels in deer from the JCI/Tyco Fire Technology Center in Marinette. In February, 20 deer were harvested and tested for PFAS levels in muscle (venison), heart and liver tissues.

As a control, 12 muscle samples were collected from deer in Price County that were submitted for CWD testing.

For those who eat venison from deer harvested within the five-mile advisory area, the muscle and heart of white-tailed deer are not likely to result in significant PFAS exposure, according to the DNR’s findings. Because levels were low, no PFAS consumption advisory for heart or muscle is necessary for deer harvested from the area, DNR Fish and Wildlife Toxicologist Sean Strom said during an online press conference Sept. 15.

However, significant PFAS levels were found in deer liver tissues. The liver filters chemicals from the blood, and some chemicals, like PFAS, can accumulate in the liver over time. These findings suggest that eating liver from deer in this area is likely to result in significant PFAS exposure. The Wisconsin DHS and DNR recommend people not eat liver harvested from deer within the advisory area. Further investigation of PFAS in deer from other locations is under consideration.

“It’s important to remember that the liver functions to filter contaminants from the bloodstream, so higher levels of PFAS in the liver was not unexpected,” Strom said. “Essentially the liver is doing its job and filtering these things out of bloodstream.”

“And considering the fact that the liver can accumulate other contaminants in addition to PFAS, we are recommending that hunters do not eat liver from deer harvested from this area,” Strom said.

Christine Haag, director of the DNR’s Reclamation and Remediation program, which oversees sites with hazardous-substance discharges or environmental pollution, said her program is currently aware of more than 40 locations around the state where there are or there have been PFAS discharges to the environment where investigations or cleanups are occurring.

Ryan, the chief of the DNR wildlife health program, said the DNR is considering doing an additional evaluation of deer liver from this upcoming gun-deer season and looking at getting an additional 20 deer geographically distributed across the state as a way to compare those PFAS values to the values from this study area.

“I think part of what we’ll have an idea of, once we get results from deer across the state, is if this was a local result, or if it’s in fact similar in in deer from other parts of the state,” Strom said.

Strom said hunters who had previously harvested a deer in the study area and may still have deer liver in their freezer should use their best judgment before consuming that liver.

“We don’t know what exposures are in the past but, going forward limiting consumption of PFAS is one of the ways you can limit your overall level of PFAS in your blood,” Haag added.

Strom said Michigan has conducted similar PFAS testing on about 150 deer, and of those tested they have only had one that had PFAS levels in muscle that resulted in a consumption advisory.

Strom said continued exposure to PFAS will influence levels that are accumulating in other organs, but he couldn’t say with any certainty whether it would eventually accumulate in the muscle or hearts of deer in the sample area.

“Based on conversations with colleagues in Michigan,” he said Sept. 16 during a virtual public hearing, “the thought is the deer with high levels in the venison is a outlier.”