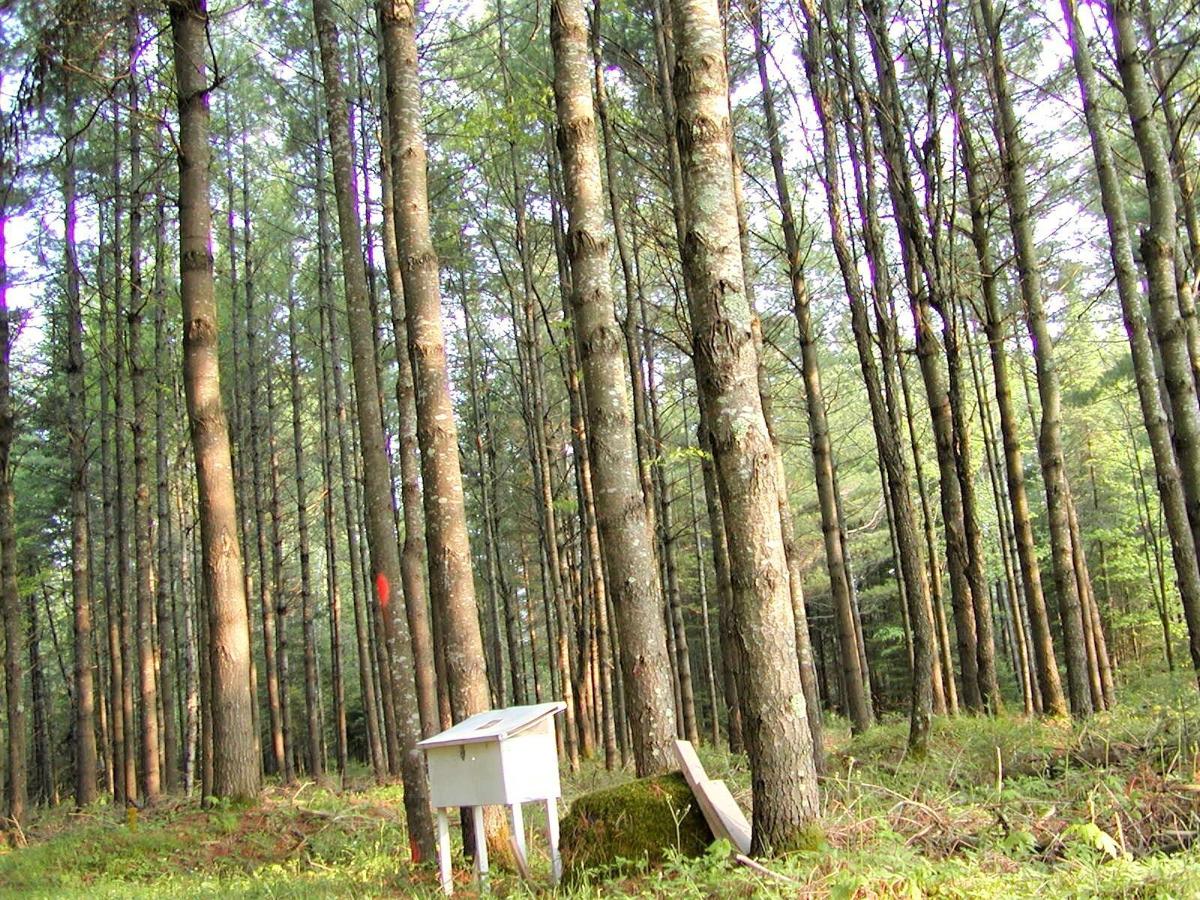 After about 60 years of white pine management including stand thinning, white pine blister rust control, and pruning five to six meters from the ground, a high quality, well-stocked white pine stand was the result by 2021 on our Nature Education Center lands in Fifield. The white box is a weather station that monitored temperature and relative humidity in the stand. 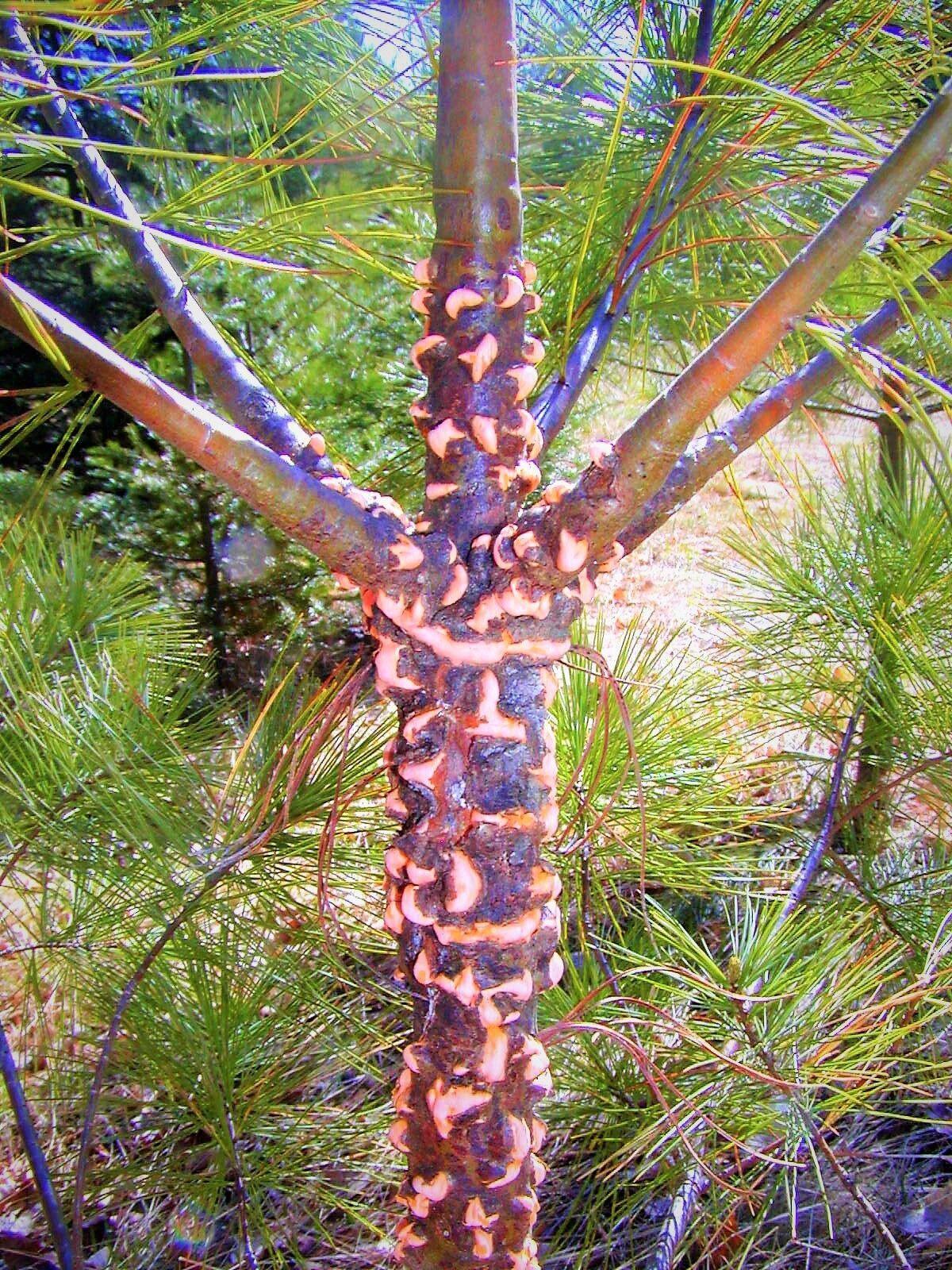 After about 60 years of white pine management including stand thinning, white pine blister rust control, and pruning five to six meters from the ground, a high quality, well-stocked white pine stand was the result by 2021 on our Nature Education Center lands in Fifield. The white box is a weather station that monitored temperature and relative humidity in the stand.

In Part 1 (see May 5 edition), I discussed Jerry Apps new book, “When The White Pine Was King.” Part 2 continues the white pine discussion with a little twist on the title, “The White Pine Is King.”

I was looking for a job right out of high school in Madison when I heard about a forest disease research summer job with the U.S. Forest Service. It involved the study of white pine blister rust in the Lake States (Minnesota, Michigan, and Wisconsin) with research forest pathologist, Dr. Gene Van Arsdel.

What attracted me to the job was the work to “track” the movement of white pine blister rust spores released by its alternate Ribes host (currant and gooseberry bushes). This rust fungus cannot spread from pine to pine; it needs an alternate host Ribes to complete its life cycle. The spores released by infected Ribes were disseminated by winds mostly at night. The spores would infect white pine if they landed on their needles when high humidity and temperature conditions were perfect for infection to occur. Colored smoke grenades were used to simulate rust spores so we could determine how far and where the smoke (spores) were dispersed and deposited throughout the forest by using spotlights. I thought it would be kind of fun to throw smoke bombs around the forest at night, not thinking it would ever lead to a life-time career in the Forest Service.

I took the job and the rest is history. White pine is still king in my mind because that tree species led me to a wonderful 31-year career in the Forest Service with an additional 15 or so years volunteering with the agency. And now, for the rest of the story.

After the virgin white pine were logged off in the Lakes States, they began to regenerate naturally from seed trees left on the landscape for that purpose and by planting nursery seedlings. The objective was to create second growth forests, but a new threat to white pine became apparent.

The new threat was a forest disease called white pine blister rust. It was introduced in the United States about 1900 and has since spread throughout the range of white pine. One of the controls for the disease was to eradicate the alternate Ribes host where possible. Many folks were employed to do just that — and it helped control or reduce the disease in some areas.

Still, the fear of blister rust limited the amount of white pine being planted in the Lake States. In fact, when I was hired to do research on the disease, the prevailing thought then was that blister rust could become a devastating disease with the potential of wiping out white pine as a species, much like Dutch elm disease almost did to the American elm.

However, years later, it was found that white pine can still be successfully grown in many places by following recommended forest management guidelines developed through experience and forest pathology research. Although some trees may still be killed by blister rust in some areas, especially in high hazard zones in the northern Lake States, we found blister rust is unlikely to wipe out white pine entirely as originally thought. In many areas where I worked, we thought most of the white pine would be killed by the disease but, decades later, many of those same areas have nice stands of white pine today.

Here is how we managed blister rust on our Nature Education Center lands in Fifield where “The White Pine Is King.”

Logging of the virgin white pine peaked around Fifield in 1892. Most logging was completed by 1920 when some cutover land was settled by Mary Lou’s grandparents. They first converted the land to dairy pasture and crop land by blowing out hundreds of tree stumps left over from the logging days. By the 1950s, dairy farming ended. A few left over mature white pine seeded former pastures so well that by the 1960s a thick stand of pine saplings two to three meters tall covered the pastures. We decided to manage those trees for timber, wildlife, and to bring back the huge, stately white pine to the landscape once again.

Typical of blister rust in Van Arsdel’s high hazard-zone four where we live, the disease was scattered throughout the newly regenerated white pine stand and lethal to some trees. To reduce disease impact early on, we used sylvicultural and pest control measures. Those included pruning cankers and lower branches, where most infection occurs, and periodic thinning. Still some scattered tree death occurred throughout the stand caused by blister rust, but that was actually beneficial by helping reduce stand density. The scattered dead trees provided homes and foraging sites for wildlife, another one of our stand objectives.

In managing our white pine, several lessons were learned. Early pruning of the lower two meters of white pine saplings (assisted by snowshoe hares) in the 1960s, were most infection occurs, helped reduce the incidence of rust mortality. About forty years later, after stand thinning, the remaining trees were pruned up to six meters from the ground resulting in a nicely stocked, high quality white pine stand by 2021 with low incidence of blister rust.

High deer populations will decimate white pine regeneration because they like to eat it just as they do white cedar and hemlock. Deer must be managed through hunting and other means to prevent overpopulation that decimates understory plants and regenerating trees that a host of other wildlife including birds need to survive. White pine grown in the open will be subject to attack by white weevil turning the trees into bushes over time as the insects continually attack only new leaders. Planting white pine under an existing overstory will help prevent white pine weevil and reduce blister rust infection where the microclimate isn’t favorable for either pest. Also, the planting of blister-rust-resistant white pine in high blister rust hazard zones and the planting of white pine in low hazard zones in the southern parts of the Lakes States will reduce blister rust’s impact in the Lake States.

In summary, white pine pests can be managed and they should not discourage the planting of this valuable tree so important to the natural diversity and ecology of our Lake States’ forests where “The White Pine Is King,” in my opinion, because it played such an important role in my life.

The private Nature Education Center in Fifield operated by Tom and Mary Lou Nicholls is open seasonally by appointment only. Nicholls can be reached at nicho002@umn.edu.