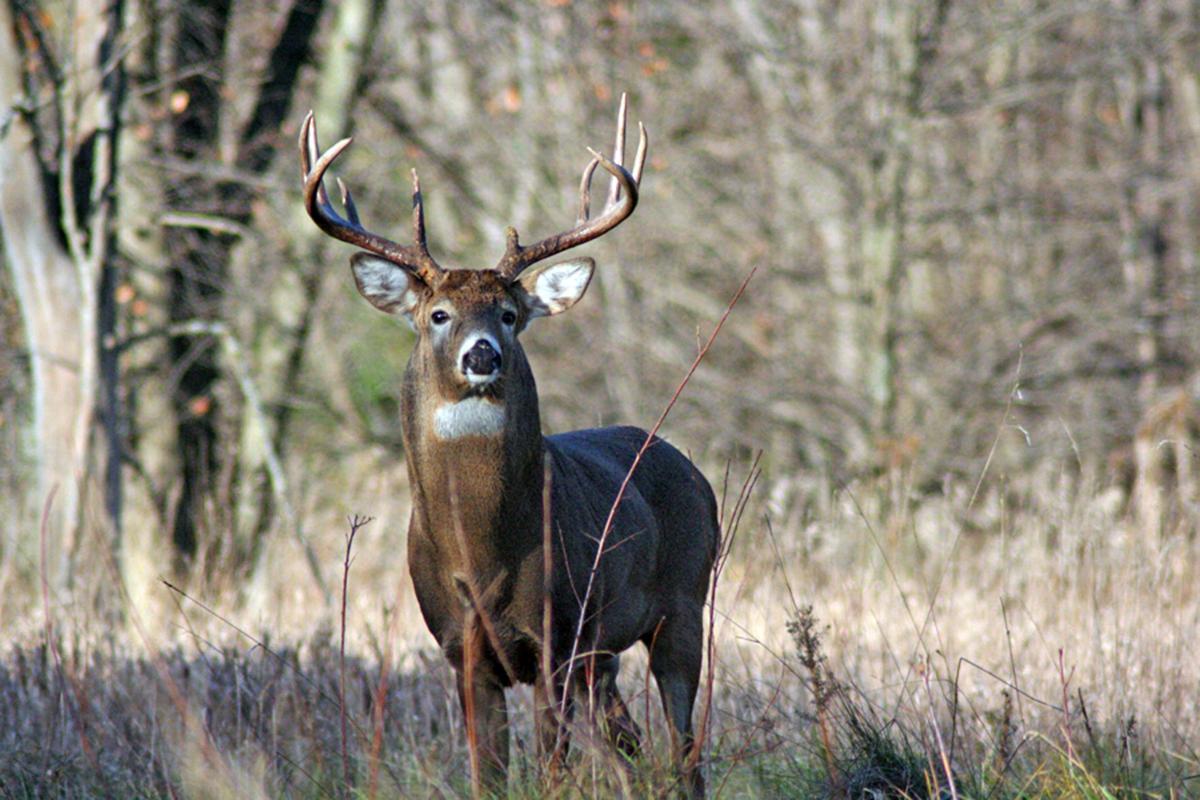 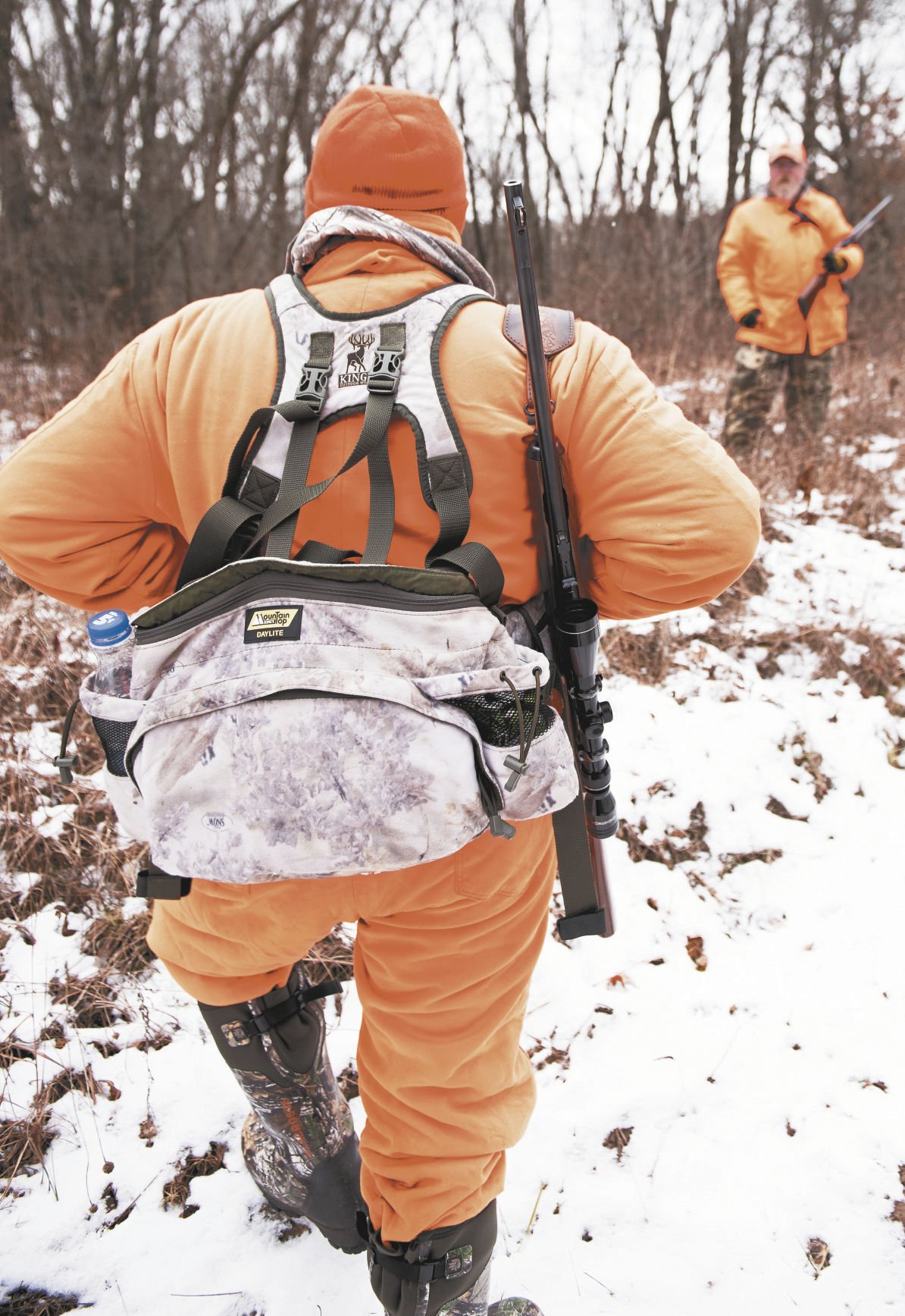 Tim Wendt, left, and Rob Johnson talked about how their respective hunts were going during the opening day of the 2018 gun deer season. The men were hunting in Eau Claire County. 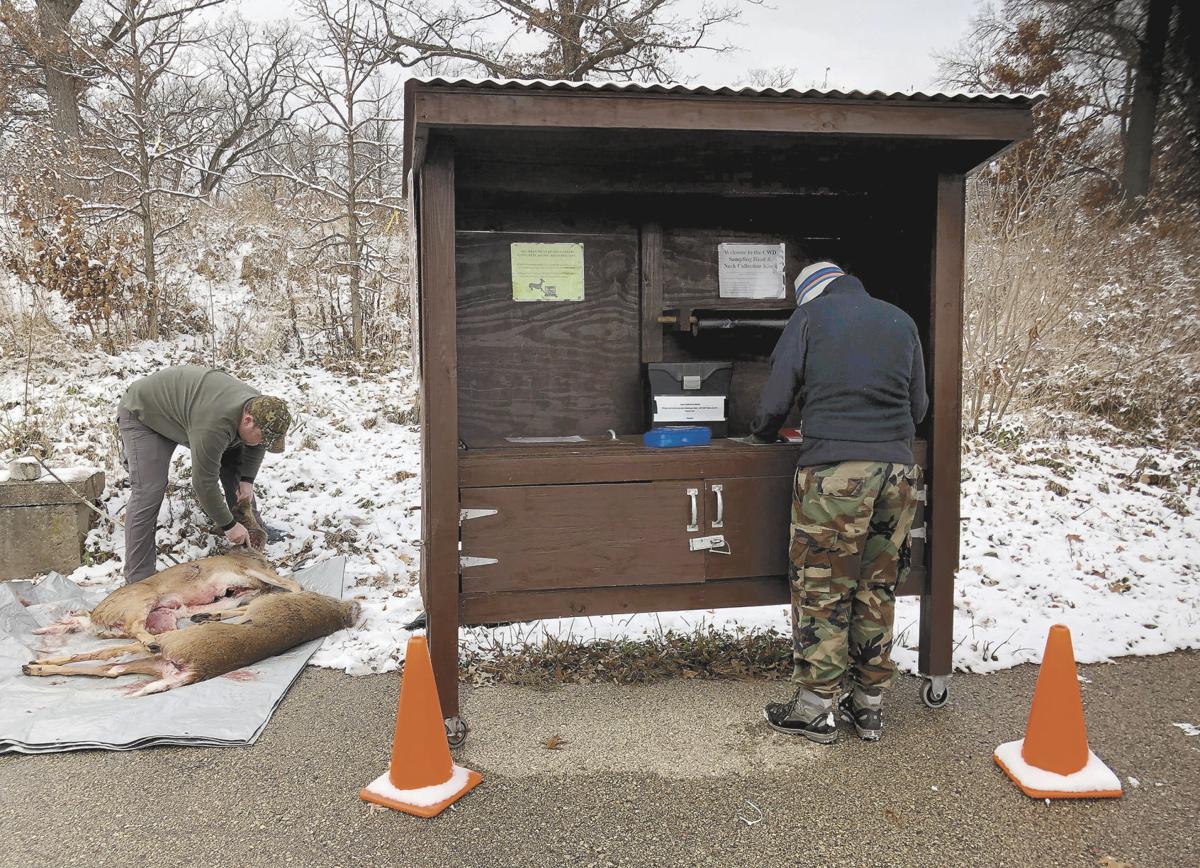 Kristin Braziunas filled out paperwork while Paul Boehnlein prepared the young buck and doe shot by Braziunas for testing for chronic wasting disease at the sampling site behind the Wisconsin Department of Natural Resources office in Fitchburg in November 2018.

Tim Wendt, left, and Rob Johnson talked about how their respective hunts were going during the opening day of the 2018 gun deer season. The men were hunting in Eau Claire County.

Kristin Braziunas filled out paperwork while Paul Boehnlein prepared the young buck and doe shot by Braziunas for testing for chronic wasting disease at the sampling site behind the Wisconsin Department of Natural Resources office in Fitchburg in November 2018.

With blaze orange hanging outside the cabin, hunters gather with close friends and family to talk about the number of deer they saw that morning, the buck they couldn’t get a clear shot at, the 12-pointer the neighbor captured on the trail camera or the effort it took to drag their prize from the swamp.

Wisconsin’s nine-day gun deer season brings with it, for some families, more than a century’s worth of tradition.

This year, however, like everything else, it has the global coronavirus pandemic to contend with.

The state’s nine-day gun deer hunt runs from Nov. 21 to 29, and while there aren’t any changes to the deer season as a result of the pandemic and the hunting season will proceed as normal, Eric Lobner, director of Wildlife Management with the Wisconsin Department of Natural Resources’ Fish, Wildlife and Parks Division, said the DNR is recommending hunters consider some alternative ways to enjoy the season this year.

“We are recommending that people take extra precautions and consider trying something new and hunting more local rather than staying in a hunting cabin with non-household members,” Lobner said. “Hunters should choose hunting opportunities within their local communities to limit travel and avoid large gatherings.”

Lobner said hunters should remember to practice safe social distancing while hunting and after.

“(Leave) 6 feet between you and anyone you may encounter while in the field or while at CWD sampling kiosks and when taking your deer to be processed,” he said.

Wisconsin deer hunters are looking to rebound from what was a down year in 2019.

After the state held the earliest possible deer season in 2018, 2019 saw the latest possible season opener, and harvest numbers declined as a result.

Opening weekend in 2019 brought mild temperatures throughout the state with some snow in the north, but hunting conditions deteriorated throughout the remainder of the season as heavy wind, snow and rain moved through the state. Blizzard-like conditions and significant snow accumulation hindered hunter access in the northern forest zone, where the largest declines in antlered harvest occurred.

The weather conditions that hindered harvest for farmers in 2019 also likely had a negative impact on hunters. At the conclusion of the nine-day gun deer hunt, there was still plenty of corn standing in fields with harvest just 66% complete, 22 days behind the 2018 harvest.

According to the Nov. 9 U.S. Department of Agriculture National Agricultural Statistics Service’s Wisconsin Crop Progress and Condition report, corn for grain harvest was 78% complete, more than four weeks ahead of last year and 13 days ahead of the five-year average.

As of Nov. 9, the DNR reported that archery license sales were up 12% from the same date last year. Gun license sales, including Patron, Sports and gun-deer licenses are up 9.5% combined compared to the same time last year.

Lobner said there could be a number of explanations for the increase in sales in the weeks prior to the start of the season.

“National trends have indicated that anytime the economy slows down, there is an increase in hunting licenses as people are interested in pursuing a less expansive food source,” he said.

“With the pandemic in full swing across the nation and in Wisconsin, there are also a number of people that have more time available and as a result are getting out and picking up one of their favorite pastimes or trying something new.”

Lobner said the sales increase could also be a continuation on trends from other outdoor recreational activities from this summer, like biking, camping, hiking and other activities.

“People are feeling a little cooped up and are looking for opportunities to get outside in a safe and economical manner, and hunting provides that opportunity as well,” he said. “Certainly the excitement is ramping up as the season approaches and temperatures have cooled.”

The DNR will also continue a second year of enhanced surveillance in northern Wisconsin in some counties where additional samples are needed and continue to provide CWD sampling within the Southern Farmland Zone and in other CWD-affected counties. The department will sample deer in the surveillance areas around wild deer CWD positive detections, as well as in the wild deer herd surrounding CWD positive farm-raised deer facilities. Hunter request testing will continue to be an option for adult deer and hunters/landowners are encouraged to report sick deer to the DNR.

Deer registration will once again be completed electronically. Hunters can register deer harvests by phone, mobile device or computer with Internet access, or in person at participating registration stations.

Hunters are required to register harvested deer before 5 p.m. the day after recovery at gamereg.wi.gov or by calling 1-844-426-3734. For more information, visit dnr.wisconsin.gov.