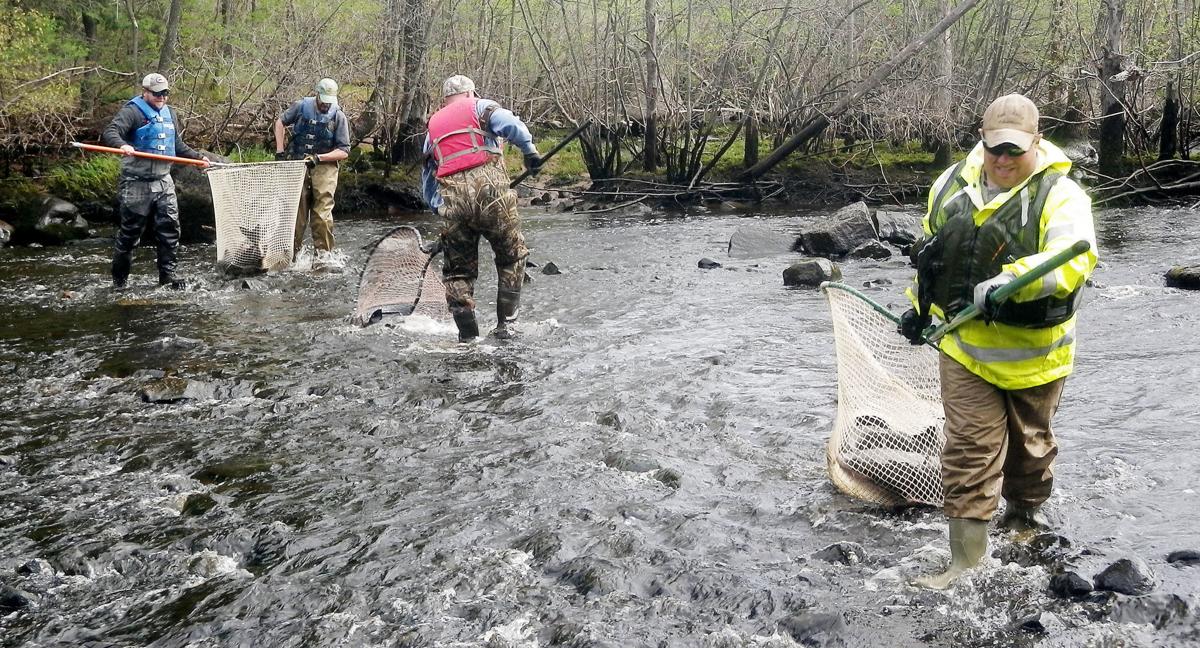 Department of Natural Resources staff and volunteers shuttle sturgeon back to a holding pen during the 2019 sturgeon rodeo. 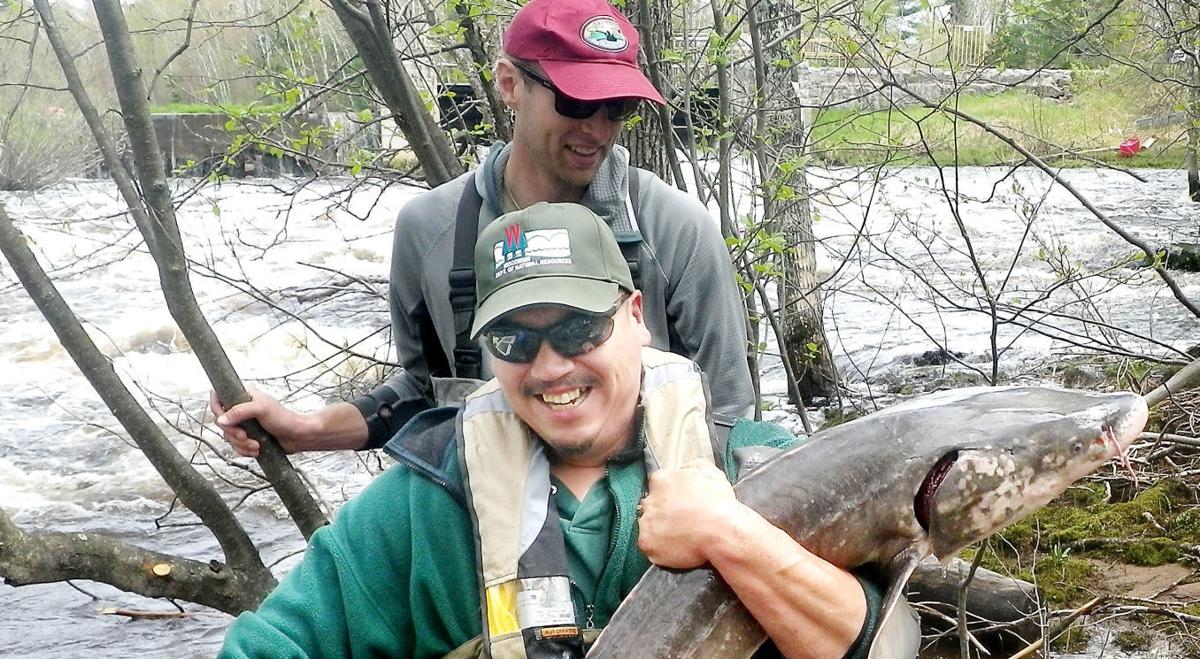 The DNR’s John Baker holds a large sturgeon captured below the Arpin Dam on the Chippewa River. 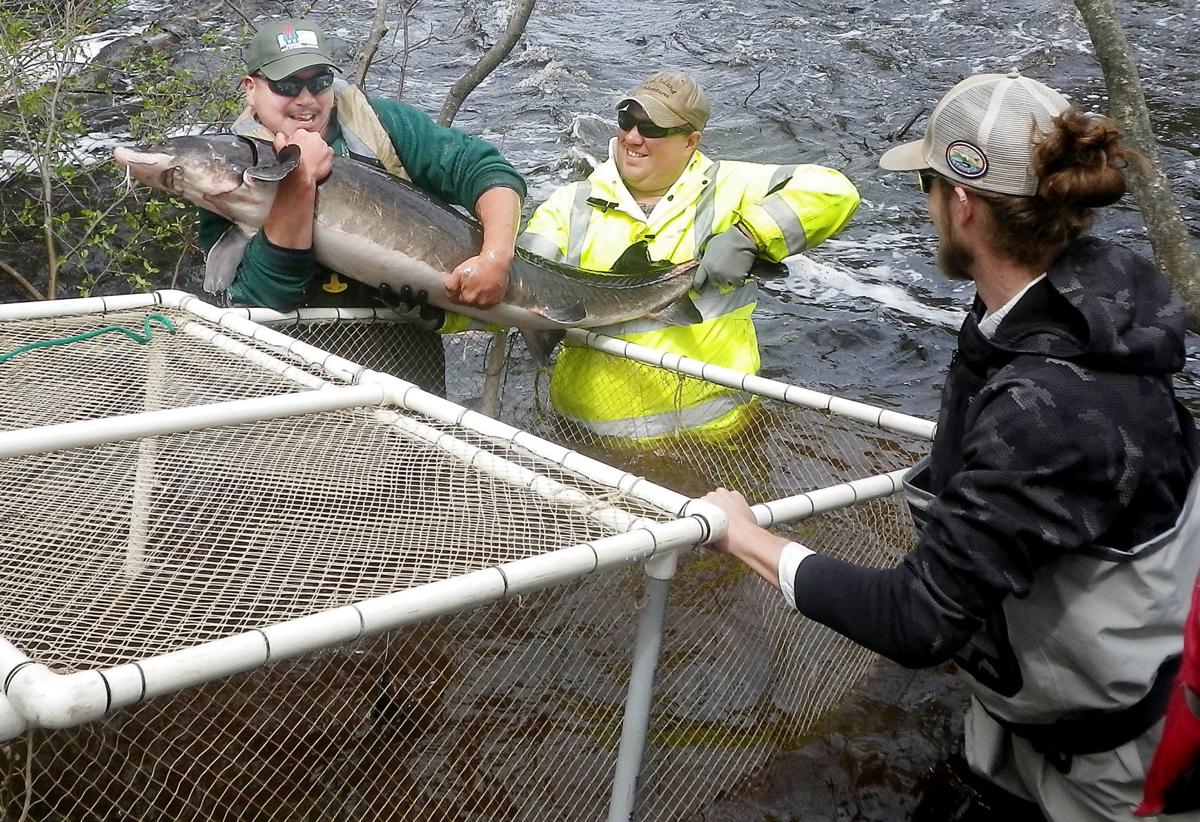 The DNR’s Scott Braden and John Baker struggle to handle a large female sturgeon on the Chippewa River. This fish was 62 inches long. 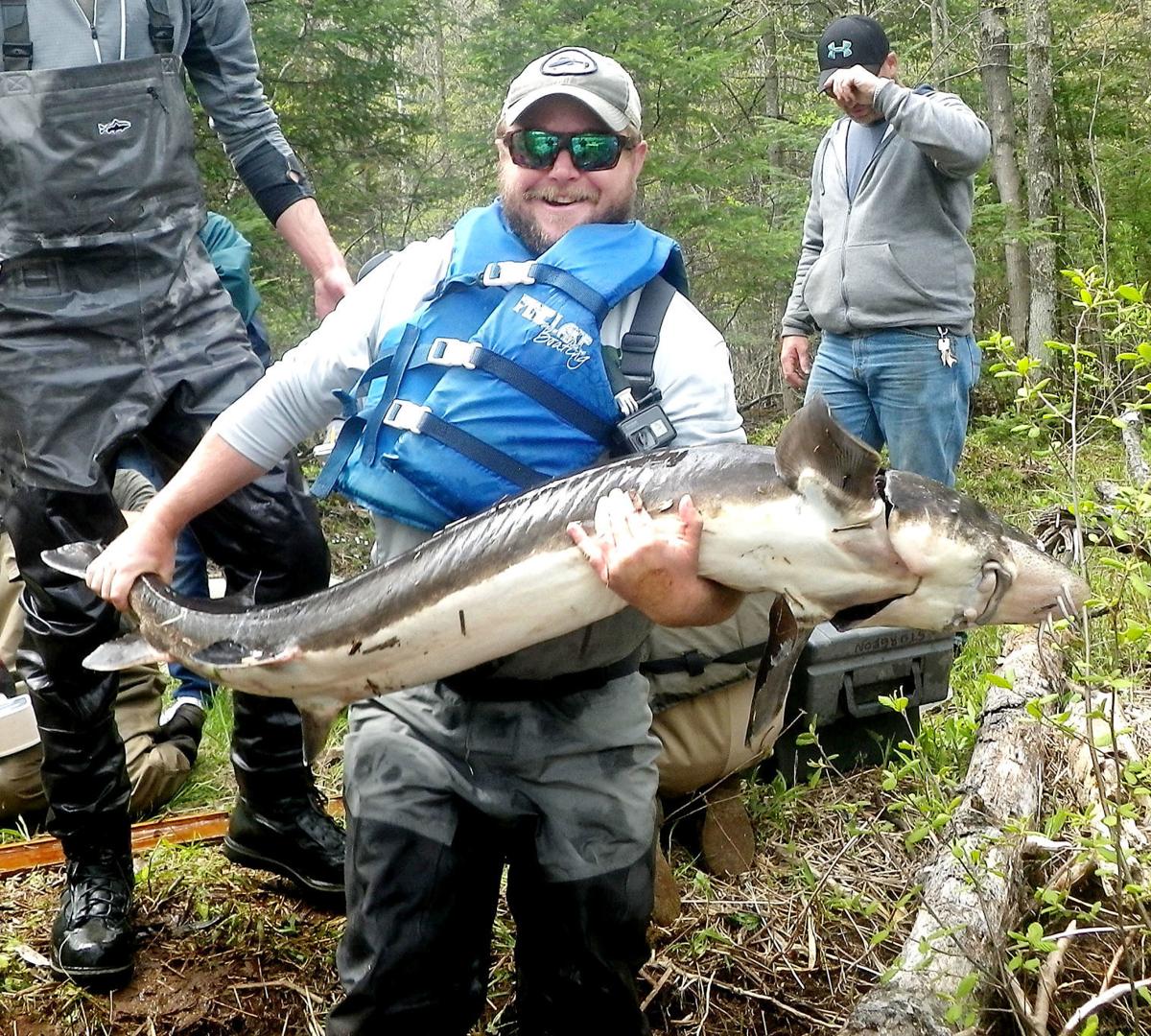 Fishing guide and sturgeon rodeo volunteer Jason Stewart holds a large sturgeon he netted on the Chippewa River as a part of a DNR survey.

Department of Natural Resources staff and volunteers shuttle sturgeon back to a holding pen during the 2019 sturgeon rodeo.

The DNR’s John Baker holds a large sturgeon captured below the Arpin Dam on the Chippewa River.

The DNR’s Scott Braden and John Baker struggle to handle a large female sturgeon on the Chippewa River. This fish was 62 inches long.

Fishing guide and sturgeon rodeo volunteer Jason Stewart holds a large sturgeon he netted on the Chippewa River as a part of a DNR survey.

Here’s the scenario: You must scramble across slippery rocks without falling into the cold water. Then you have to chase down large prehistoric creatures and capture them with a net. And you only have 20 minutes to do it. This might sound like some bizarre level of a video game, but it is, in fact, a description of one of our most entertaining Department of Natural Resources fisheries surveys in Sawyer County.

We survey sturgeon every few years on the Chippewa River below the Arpin Dam, which creates the Radisson Flowage. I refer to this survey as the “Sturgeon Rodeo,” and you’ll soon understand why.

Sturgeon run upstream to spawn, so that when their eggs hatch the larvae can drift along in the free-flowing river as they develop, before eventually heading to the bottom of the river. Upstream spawning migrations of adult sturgeon often run into dams, and since they can’t go farther, this is where spawning happens. Oftentimes there will be large numbers of sturgeon under dams during the spawn. This can be the scene at the Arpin Dam, where sturgeon from as far down as Lake Holcombe in Chippewa County may show up to spawn, usually in mid-late May. It’s worth noting that this area is a designated fish refuge, closed to fishing, because of its importance to sturgeon.

Congregations of these large and often solitary fish provide DNR fisheries crews an invaluable opportunity to collect key population data. But how do we capture these 4- to 5-foot long torpedo shaped fish in the turbulent rushing water below a dam? With a little help from our friends and a lot of hustle.

The hydropower company that owns the Arpin Dam, and their operator Jerry Potter, have been willing to cooperate with us to make these survey events happen. Their key contribution is 1 to 3 periods of about 20 minutes of lower flow through the dam gate, which drops the water below the dam and gives us a chance to go in after the fish. This sets up one of the few instances in fish management where athleticism really counts. We have to capture as many sturgeon as possible within that window if we want to have a productive survey.

If we have limited time, it helps to have more hands. For the 2019 sturgeon rodeo I called in some favors and got a handful of fleet-footed young fly-fishing guides from around the area to help. The only people faster on slippery rocks than a fish biologist or fish technician is a fishing guide. And since they make their tips by successfully landing fish for clients, they are pretty darn good with a net too.

The nets we use for the sturgeon rodeo look like landing nets, but maybe if it was a landing net for Paul Bunyan. The handle is 8 feet long and the frame of the net is a little larger than a hoola hoop. The frames of our sturgeon nets come in all sorts of odd shapes, some designed to fit better into an angular crevasse between river rocks where a sturgeon might try to bury its nose.

Here’s the scene from the 2019 Sturgeon Rodeo:

My team (which includes fish techs Evan and Scott), the Park Falls DNR Fish Team who often come over to help, and our mercenary guides stand ready as the gates pinch down the flow of water through the dam. Moments later the tops of once submerged rocks start to show. The next thing we see are the remarkably shark-like fins of sturgeon, snaking back and forth, holding the fish in place in the ebbing current. As the water drops a few more inches the advantage turns towards the humans while the sturgeon concentrate into the deeper runs of remaining current.

Careful but eager footsteps carry our sturgeon cowboys and cowgirls across the algae-slicked rocks towards the fish. The key is to approach from the side and just upstream. Trying to swoop the net from downstream to up is completely futile, and the fish will scoot away every time. The only viable option is a headfirst snag with a quick lift at the end.

Catching one sturgeon is not hard, but it’s also not enough. Under the pressure of time, it is not efficient enough to capture and return them to the holding pen one at a time. Three sturgeon per net is the unofficial minimum, with a prolific netter coming back with six or seven. And so, the trick becomes how to keep Sturgeon No. 1 in your net while you swoop it in the water to catch Sturgeon No. 2. And then repeating the trick several more times.

As our victorious netters return with their thrashing temporary captives, we begin to fill the holding pen along the side of the river channel. As we load the fish, we get the call from Jerry to clear the main channel, the dam gate is about to be reopened. This is perfect timing. Higher water level means we can fit more sturgeon in the pen.

Some years, like 2019, we are able to capture just about all the sturgeon that have come to spawn on that day. It was a low flow year, and some cold fronts may have put off some potential spawners. We wound up with 35 sturgeon on the day, with the biggest being 62 inches. In 2017, we captured 116, and there were still double that number that we didn’t have time or energy to capture.

The data we collect from these fish are unique and valuable. Sturgeon are extremely long lived, with reports of some reaching over 100 years of age. That means we have a very good chance of seeing the same fish several times, sometimes with a decade in between captures. Each fish we catch is given a unique internal tag, the same kind used to track lost pets. By scanning for these tags we know which fish we’ve seen before and we can track their history and learn from their behavior. These tags can tell us how often a sturgeon will spawn (most do not spawn every year), how fast they grow, and where else they might go. This kind of information can be used to manage everything from fishing regulations for this remarkable species, to how dams are operated, including the one we were standing below to capture these fish.

The Sturgeon Rodeo is much like the spawning pattern of an individual sturgeon: it doesn’t happen every year and the conditions have to be perfect. But when the rodeo is on, it’s quite a sight to behold.

Wolter is the Department of Natural Resources senior fisheries biologist in Sawyer County and a lifelong angler.